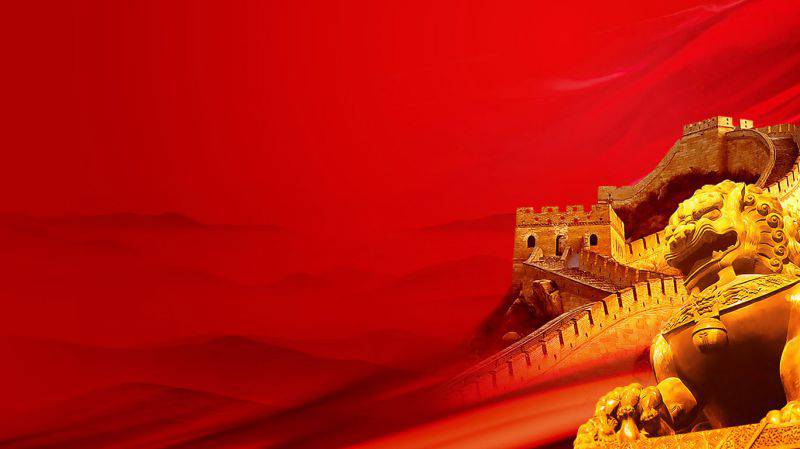 “Wars and revolutions do not solve problems. The only solution is the industrial revolution, industry and capital. China knows how war and crisis are dangerous for its economy, and it will never get involved in crisis or war. ”

(From the speech of General Qiao Liang to the graduates of the Defense University of China, July 2015)

China removed the oil platform from the disputed area in the South China Sea due to disagreements with Vietnam. The islands of Kuandao are still considered the territorial possessions of China, and the armed forces of the Middle Kingdom have absolute superiority over the army of the southern neighbor. Yet China retreated. “Bent over.” Modern Chinese doctrine does not allow waging war even on its own shores, not to mention the overseas continents.

The fighting in the Taiwan Strait has not been heard for decades. Once one of the “hot spots” of the planet has become a bridge between the two leading economies. The annual trade between China and Taiwan exceeded 200 billion dollars. A couple more decades, and the “rebel island” itself will fall into China, like a ripe pear.

China has set the right priorities.

Economy - the military way of General Qiao Liang. His main weapon - New Silk Road. China’s full integration into world markets, in which the PRC will put all its competitors on its shoulder blades.

Many of the facts below can cause surprise. But that's how legends and superpowers are born. And today we have the honor to observe with our own eyes the unstoppable growth of the Asian giant.

The population of 171 Chinese metropolis has already exceeded a million people. By 2025, the number of such million-plus cities should increase to 220. By this time, they should be resettled to 300 million Chinese peasants.

Seven of the ten largest container container sea terminals are located on the coast of China. The first place is held by the Shanghai deep-water port of Yanshan, whose cargo turnover reaches 35 million containers per year.

Of the 40 largest cable-stayed bridges in the world, 20 has been transferred across the Yangtze River. The largest hydraulic structure on the planet, the Three Gorges hydroelectric station, was also erected there.

In 2016, China plans to commission a record-breaking bridge in the open ocean, connecting Hong Kong, Zhuhai and Macau (50 kilometers). It is this place in the Pearl River Delta in the south-east of China, according to forecasts, will be the largest metropolis of the future.

In 2015, at Sun Yat-sen University in Guangzhou, contrary to the worldwide ban, it was first modified by the human embryo genome. There, in the National Computing Center in Guangzhou, the world's most powerful supercomputer (Tianhe-2) operates.

China's economic expansion has spilled far beyond East Asia. Red Dragon entered the real struggle for the Black Continent. To date, Chinese state corporations have seized most of the African assets and subdued the mood of the African establishment. Their efforts were the longest road in East Africa ($ 300 million). A hydroelectric power station was built in Ghana ($ 700 million) and a mega-mosque in Algeria with a capacity of 120 thousand (built by the state-owned company China State Construction Engeneering, the cost of the project is $ 1,3 billion). Angola has become the third largest supplier of oil to China. Last fall, information appeared about the creation of a Chinese naval base in Djibouti.

The epoch of the new colonization of Africa has finally found its shape, with China’s philosophy of “soft power” and complete political neutrality. Investments in exchange for resources.

According to a certificate prepared by the Ministry of Economic Development of the Russian Federation, as of September 2015, Russia occupied the 15-place in the list of the most important trading partners of China. With the prospect of slipping into 16-th place, which was “successfully” stated at the end of last year.

Among the most high-profile business projects in the field of Russian-Chinese cooperation was a plan announced last year to pump Fr. Baikal. According to Buryat media, the design capacity of the enterprise in the village. Vydrino will be 2 million tons of water per year. The “Earth Well” trademark is already registered in Chinese and English.

What is the future of Russia in the era of the rise of China? Who are we for each other? True ally or restless eastern neighbor? Strategic partner or a regular “gas station”?

Among the positive moments there is a coincidence of the development vectors of the Russian and Chinese economies now and in the foreseeable future. In addition to the import of hydrocarbon raw materials, China is still interested in cooperation in high-tech industries, including nuclear technology and aerospace technology. The PRC supports any foreign policy initiatives of Russia, or at least does not in any way prevent their implementation in the world.

The notorious “annexation of Siberia” has not yet received worthy evidence. Optimists associate this phenomenon with the peace-loving policy of the PRC, also referring to Chinatowns in American cities. Despite the tenfold large number and keen reluctance to integrate, the presence of millions of Chinese did not lead to any disastrous consequences for the United States.

Pessimistic researchers suggest recalling the Soviet-Chinese armed conflict on Fr. Damansky, the occupation of Tibet and the harsh suppression of the speeches of the Uyghur communities in northeastern China. Conclusions to do early, modern China is only gaining momentum.

According to VTsIOM, over half of Russians (51%) consider China to be the most friendly country towards us. But how well do we know each other?

Can you name five Chinese cities with a population of more than 10 million? It is not necessary to dissemble and watch tips on the Internet. Most of us hardly ever heard of Chunqing and Tianjin. How many books of Chinese authors have been translated into Russian? How many of them have you read? Anyone from your friends will be able to read the inscription from the Chinese characters?

Our socio-cultural differences go back centuries. Which of historical and literary images are more familiar to a Russian person: Julius Caesar or Qin Shi Huang? Lovely Elena or Yang Guifei? The great commander Hannibal or his Chinese counterpart Zhuge Liang?

In the case of contact with the Middle Kingdom, we are dealing with an exotic Eastern civilization with its own, in many respects alien to us, philosophy, and view of the world. And the main question of the cataclysm: can we adequately accept this challenge and find our place in the changed world?

Ctrl Enter
Noticed oshЫbku Highlight text and press. Ctrl + Enter
We are
Kinmen: an outpost of Taiwan off the coast of the PRCThe Pacific front takes shape
Military Reviewin Yandex News
Military Reviewin Google News
57 comments
Information
Dear reader, to leave comments on the publication, you must to register.