January 12 2016
74
According to Israeli Internet resources, at the very end of 2015 of the year, December 30, at the airfield of Megido, located in northern Israel, an unmanned aerial vehicle, AirMule, was tested. The Flying Mule performed its first free flight. Until recently, tests of this Israeli UAV were carried out only on a leash.


According to Rafi Yoeli, who holds the post of CEO of Urban Aeronautics (Tactical Robotics, which created the AirMule drone, is one of its subsidiaries), during the tests conducted in Megido, the capacity of the vehicle was demonstrated. The specialist also expressed the hope that already in 2016, as part of the tests of the UAV, it will be possible to demonstrate some of its unique capabilities.

This test flight was the first for a promising Israeli drone when it was not “tied” to the ground with the help of special cables to ensure the safety of the aircraft. According to Israeli media, the aeromul took off, flew along a given trajectory and landed at its starting point in a completely autonomous mode. Over the course of 2016, several more tests of this aircraft are planned for Israel. In the event that these tests will be recognized as successful, the device will go into service with the Israeli military.

It is reported that during the test flight of the UAV AirMule controlled the height of its flight with the help of two laser altimeters (altimeters) installed on its board. In the near future, they will be replaced by a radio altimeter in order to ensure that the unmanned vehicle operates in adverse weather conditions - in heavy fog or in a dusty storm. During the 30 flight of December 2015, the device was navigated using inertial and GPS systems, as well as using optical systems along markers located on the ground. There was also information that during the flight noise was recorded, which made the drone. According to the company Urban Aeronautics, the noise of the AirMule UAV is significantly lower than that of modern helicopters. What specific values ​​are being discussed and what type of helicopter the prospective drone was compared with, the company did not specify. 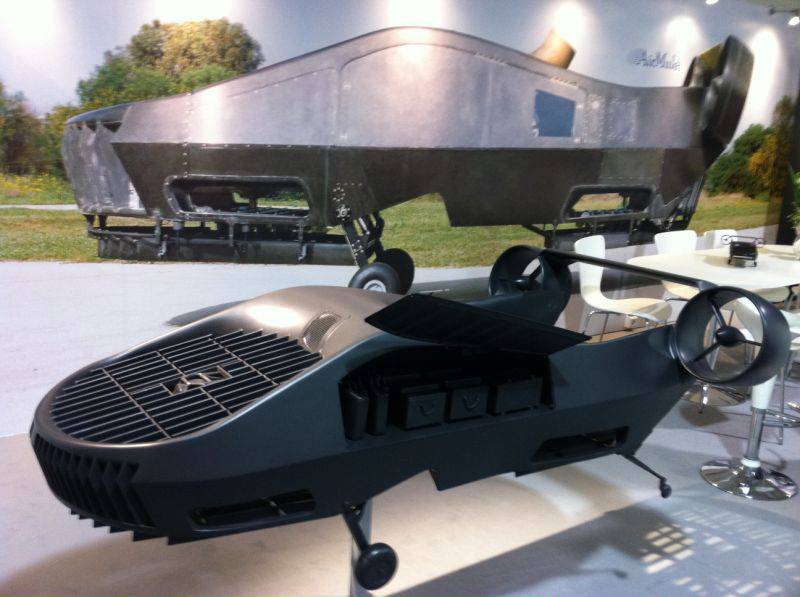 It is worth noting that the AirMule UAV project started about 10 years ago. It was created in the design office of the Israeli company Urban Aeronautics in January. The development of an unmanned vehicle is being commissioned by the Israeli army. The tests of the first model of the new aircraft began in January 2010 of the year, and since December 2013 of the year, he began a series of tests on a leash. To date, two prototype UAVs have already been built, which together made 2016 flights by 200 year. It is reported that during the day only one “flying mule” will be able to carry out 12 flights with cargo, transferring kg of various military equipment and supplies to the 6000. Thus, the squad, which will consist of 10-12-like UAVs, will be able to provide uninterrupted supplies to the leading military operations of a military group of up to 3000 people.

According to Rafi Yoeli, currently Tactical Robotics has already received an 2 Category certificate from MTCR - Missile Technology Control Regime for the export version of its unmanned aerial vehicle, which has received the international name Cormorant. This category limits the export of UAVs with a payload mass of up to 500 kg and a range of more than 300 km. The fact that Tactical Robotics has such a certificate will allow it to establish the export of the unmanned Cormorant to other countries. In particular, the newspaper "Globes" wrote that the drones of Cormorant can be soon adopted by the American special forces, they are planned to be used for operations in the deep rear of the enemy. However, the Israeli company Urban Aeronautics refrains from such forecasts and does not comment on them. At the same time, independent experts say that today there are several such competing developments, including American ones.

Unmanned aerial vehicle AirMule is a compact UAV, equipped with a single engine and having the ability to make a vertical takeoff and landing. This drone, like its export version of the Cormorant, can land without problems where ordinary helicopters cannot land. In addition, such unmanned aerial vehicles are able to take off and land from small warships. In addition, Aeromul can be equipped with special equipment: radiation-chemical or electron-optical reconnaissance. The main purpose of the drone is the transportation of various cargoes, as well as ammunition and evacuation of wounded soldiers to the rear. The device is equipped with four screws, two of which are mounted parallel to the earth's surface and are designed to climb, and the other two are located in the stern of the drone perpendicular to the ground and are designed to give the UAV acceleration. 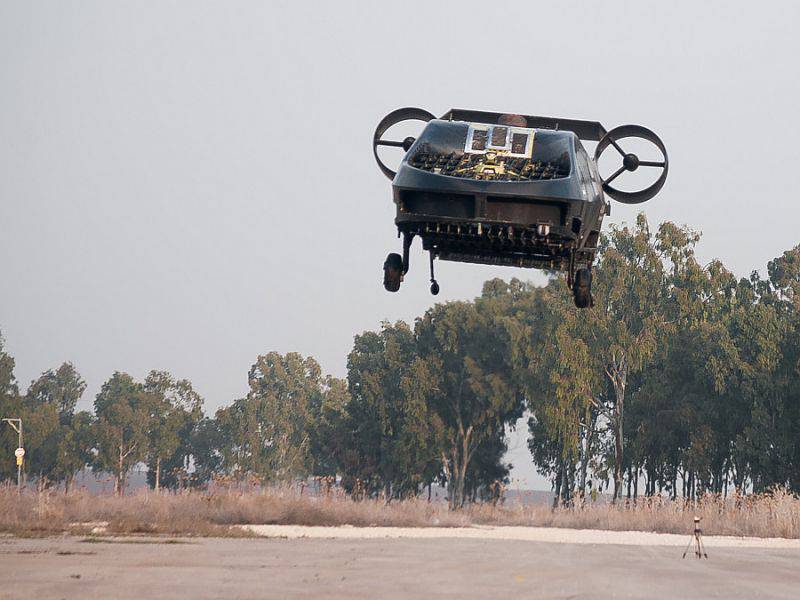 It is reported that the export version of the drone is capable of transporting cargoes weighing up to 440 kg by air to a distance of up to 300 km (as the flight range decreases, the payload of the UAV can be increased). The maximum speed of the device is about 185 km / h, the maximum flight height of 3,7 is thousands of meters. The project, which was launched almost 10 years ago, is currently close to its logical conclusion. According to the developers, the dream was realized, the aircraft, which meets the necessary criteria and safety standards, has already been created, the device prototypes performed the order of 200 flights. It is noted that drones AirMule and Cormorant can be used not only for military but also for civilian purposes. In the distant future, these drones can become “flying cars” of a very wide scope. For the military, such a device could be indispensable for the evacuation of wounded soldiers from dense urban areas, in which an ordinary helicopter simply cannot land.

The AirMule UAV has been developed by Urban Aeronautics (the lead performer of the Tactical Robotics project) at least since 2008. The BLA is created at the request of the Israeli Ministry of Defense, the work on its creation is funded by the state. At the same time, work was being done on the ship-based version. The Israeli military thought about creating such a drone soon after the end of the Second Lebanon War in 2006, when they were faced with the need to evacuate (and preferably by air) a large number of wounded Israeli soldiers.

The maximum take-off mass of the unmanned vehicle is of the order of 1400 kg, while it can transport up to 500 kg of cargo (according to other data 635 kg of payload). First of all, the AirMule UAV is considered by the Israeli military as a means of expeditious delivery of cargo and supplies to the advanced parts of the ground forces, as well as reconnaissance groups. Another area of ​​its possible use may be the evacuation of wounded soldiers from the battlefield. The drone is able to transport two seated or recumbent people through the air. Optionally, the drone can be equipped with a control cabin, which will allow to operate the device in manned mode. 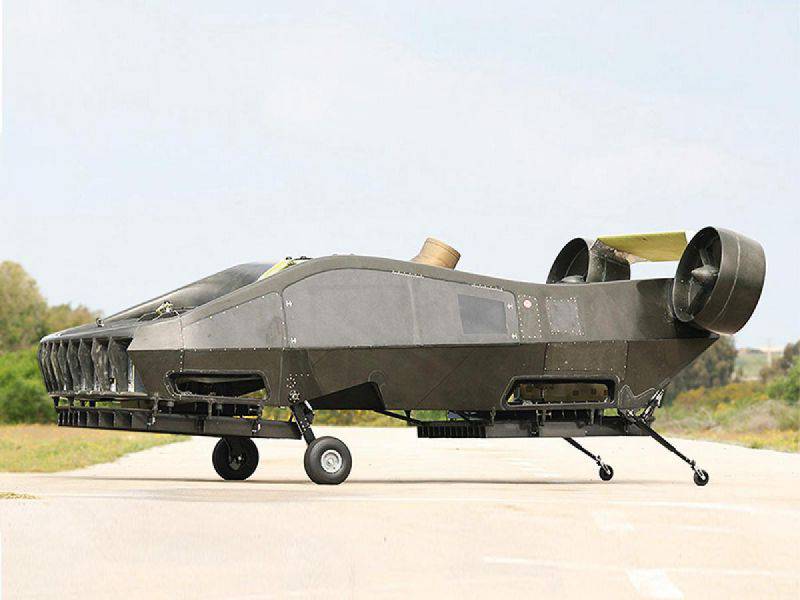 Tests of the first built AirMule UAV in hover mode started in January 2010, and since December 2013, the device began to be “tethered”. Total built two prototype drone. The aerodynamic scheme used by the devices was created and patented by Urban Aeronautics under the Fancraft brand. The turbomer engine Tomebomeca Arriel 2C2, developing the power of the 940 hp, was installed on the droneless aircraft. Initially, the Arriel 1D1 engine of lower power — the 750 hp — was placed on the first prototype of the drone. This engine drives two large lifting fans and two small pusher screws located in ring installations.

Serial drone models will have to reach speeds of up to 180-185 km / h, rise to altitudes up to 3700 meters and be in the air for more than 5 hours. The total weight of the cargo and fuel on board the drone is 635 kg with a mass of empty apparatus 771 kg. All the payload that is taken on board is located in two internal compartments of 0,77 cubic meters each. In addition, the cargo compartment with a volume of 1 cubic meter can be suspended on the external sling of the device. It is reported that the drone will be equipped with 24-hour Electron-optical complex Controp D-STAMP.

The AirMule device is designed to be used both in a fully autonomous and remotely controlled mode; for this it was equipped with a specially created automatic landing system called Auto-Land. In normal mode, it can transport cargo weighing up to 500 kg over a distance of 50 km and return back to the starting point. At the request of the Israeli military, the UAV must be able to operate at any time of the day and in adverse weather conditions, for example, at a wind speed of up to 50 knots. Due to the all-composite design of the device, small size and a set of measures aimed at reducing signatures, the drone must have a low visibility and high secrecy. To carry out an emergency landing on its board was even provided a rocket parachute system. 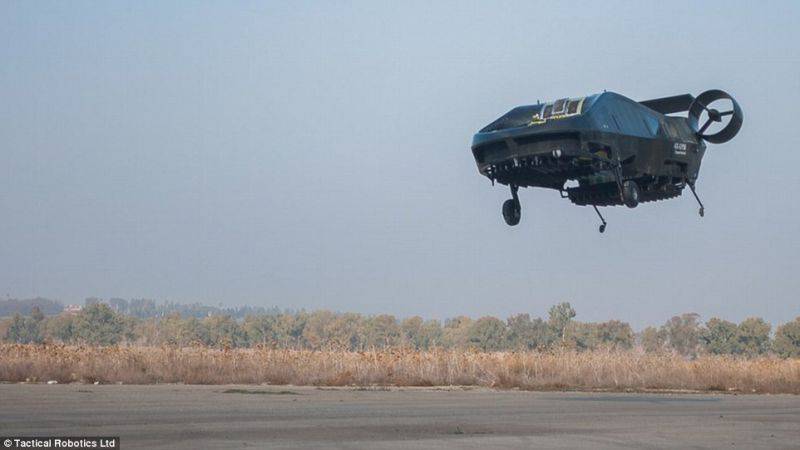