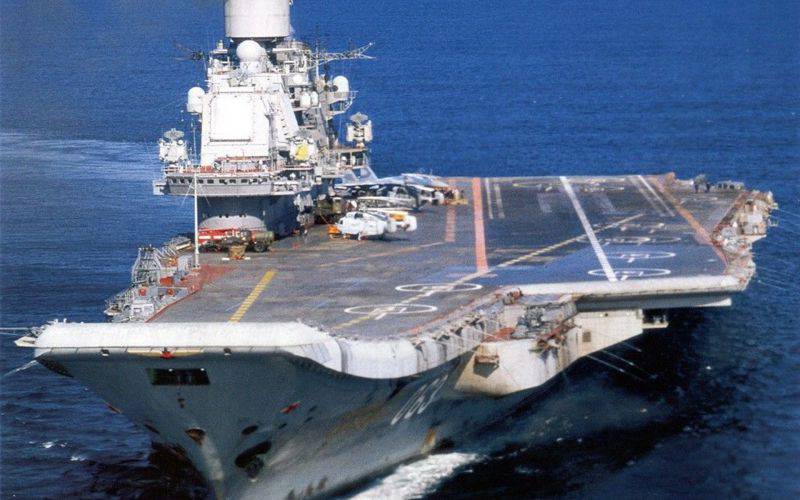 History the creation and construction of aircraft carriers of the USSR and Russia is deeply dramatic and in many ways tragic.
Despite the fact that the Soviet leadership fleet back in the 1920s, they realized the enormous potential of this new type of ship in a naval war, and then the first attempts were made to build them, the first "full" aircraft carrier - the heavy aircraft carrier Admiral Kuznetsov, became part of the fleet only in the end of 1991. Before the Great Patriotic War, and then, until the mid-1960s, the construction of such ships was largely hindered by the country's economic capabilities, and after that by the will of the country's top military and political leadership.

Currently, the Russian Navy has only one aircraft carrier - the same Admiral Kuznetsov TAKR, which performs more “training” functions, to ensure that they receive operating experience of such ships, rather than being a full-fledged combat unit. As before, aircraft carriers are the “blue dream” of modern Russian admirals. However, while the new Russian aircraft carriers remain only dreams, and there are a huge number of economic and industrial factors that impede its construction. The only thing is, now there is no need to prove their role to the political leadership of the country, in contrast to the “Soviet” times.

At the same time, the question of the need to build new aircraft carriers for the Russian fleet is the subject of public debate, mainly in the vast media and the Internet, and has huge "camps" for both supporters and opponents. This article attempts to address this issue from all sides. First you need to consider the arguments of opponents of the construction of new aircraft carriers for the Russian fleet. After reading their opinions, we can distinguish about the following arguments:

- The “race” with the fleets of the United States and other Western powers is a priori meaningless, since Russia is a “continental” power, while the United States and a number of other Western powers (for example, Great Britain) are “sea”, for which the fleet is almost the main military-political tool. Accordingly, the US fleet will a priori totally surpass the Russian, and the “chase” behind it in an attempt to equalize the combat capabilities, as it was during Soviet times, due to the huge number of factors, especially economic, was doomed to collapse from the beginning.

- Opponents of Russian aircraft carriers see in them, first of all, a “superpower” military-political tool that allows them to “project power” in various parts of the globe, as well as a kind of “colonial policy” tool with a view to exerting military and “psychological” influence at various countries of the Third World, “looking back” at the same time primarily on the US carrier fleet. This view is only partially true. In addition to the above “functions” of aircraft carriers, their main role in the US Navy is missed. And in the American Navy, aircraft carriers are, first of all, a means of gaining dominance at sea. If you look at the experience of using American aircraft carriers in local conflicts of recent decades, it is easy to notice that the role of the deck aviation was largely "secondary." Most of the tasks that lie with aviation in all these conflicts were solved primarily by "ground" aviation. Actually, US dominance in many regions is ensured not by aircraft carriers, but by a huge network of military bases, scattered in many continents, on which the necessary aviation and land groups are deployed, if necessary. However, in solving the problems of gaining superiority at sea, American aircraft carriers have no equal. Their deck squadrons, capable of launching a huge number of anti-ship missiles (RCC), can crush the forces of the fleets of most potential adversaries.

Now consider, actually, what kind of "advantages" ensures the presence of an aircraft carrier. Immediately it is worth noting that the concept of aircraft carrier use in Russia (and in other countries) has little to do with the “American” one, so targeting the United States on this issue is meaningless. The main task of aircraft carriers in the Russian fleet is, first of all, the creation of an "air shield" over the connection of ships and the increase of its combat stability.

“Even a“ lightweight ”aircraft carrier has on board an 2-3 fighter squadron that directly covers the connection of ships, wherever it is. What provides an order of magnitude greater combat stability. Despite the fact that modern shipboard air defense missile systems provide high fire performance, carry out simultaneous shelling of several targets, and have a very high probability of hitting the enemy with anti-ship missiles, it is worth noting that enemy aircraft can freely launch their anti-ship missiles outside the effective air defense of a ship. In this case, the ships will have to independently fight off a large number of anti-ship missiles and with a massive attack, a large anti-ship anti-ship missile can "pierce" the air defense of the ship connections. However, even 1-2 squadrons of deck fighters can, if not disrupt, then significantly disorganize even the massive attack of enemy aircraft, which will simplify the "work" of shipboard air defense systems. Note, we are talking about a massive attack by enemy aircraft, for example, in a battle with the American carrier strike group (AUG). And in this role, in addition to the aircraft carrier, nothing can provide adequate air cover for the compound. Covering the "coastal" aviation is possible only in close proximity to the coast, and it is a priori less effective than from the carrier-based aircraft.

- The presence of an aircraft carrier as part of a compound greatly expands the capabilities of reconnaissance and target designation for connecting ships. The composition of the deck wing at a minimum includes long-range radar detection helicopters (AWACS). And even with their limited capabilities in comparison with DRLO planes, they are able to detect air and surface targets at a distance of 200 kilometers (the DRLO deck aircraft in our country have not been created, and obviously, the development of such an aircraft will take a long time). However, the construction of an aircraft carrier is not a quick process, to put it mildly. Moreover, in the long term, the role of DRLO airplanes can also be assumed by DRLO drones (such projects exist in our country). This provides the possibility of both the timely detection of air threats and the issuance of target designation for anti-ship missiles when firing at a long range. It also significantly increases the capabilities of the ship's air defense weapons. The new shipboard SAM systems, such as the European PAAMS, the American Aegis with the latest SM-6 anti-aircraft missiles and the Russian Polimen-Redut, have anti-aircraft missiles with active homing heads, which allows them to hit low-altitude targets (which include anti-ship missiles) outside of the horizon . However, this requires information about the targets behind the radio horizon, and only Airplanes or DRLO helicopters can provide it.

- The aircraft carrier can significantly increase the impact capabilities of the connection. Modern aircraft generation 4 + can use almost the entire range of controlled weapons, and even a light fighter, such as the MiG-29K, can easily “take” two light anti-ship missiles.

- Finally, an aircraft carrier is also a kind of huge command post for connecting ships. Only on ships of this class are installed the most advanced automated control systems of the ship connection, capable of receiving, transmitting and processing information from the ships of the compound, submarines, aircraft and naval headquarters almost in real time.
Thus, the presence of an aircraft carrier in the composition of the ships is not just at times, but an order of magnitude increases its combat stability and combat capabilities. Even despite the fact that the modern Russian fleet is largely "coastal", its "zone of responsibility" is very large. What are only the waters of the Barents or Sea of ​​Okhotsk. At the same time, the fleets of potential opponents are very impressive. Even to solve the problems of the defense of the maritime borders and the sea economic zone of Russia, it is extremely difficult to get along without aircraft carriers. To ensure these tasks, it is desirable for the Russian fleet to have one aircraft carrier group in the Northern and Pacific fleets, which would include an aircraft carrier, 1-2 missile cruisers or destroyers, 3-5 frigates and 1-2 multi-purpose nuclear submarines (APS) frigates and XNUMX-XNUMX multi-purpose nuclear submarines (APS) frigates and XNUMX-XNUMX multipurpose nuclear powered submarines (APL)

And no less important, in addition to the obvious military advantages, the construction of an aircraft carrier is a huge investment in the country's industry. The construction of such a ship is only possible for the most developed powers, in fact it is a kind of “national project”, on which thousands of enterprises throughout the country work. Yes, the aircraft carrier is insanely expensive, but the cost of it will pay off at times in the future. Its construction will entail "pulling up" the level of the industry as a whole, and its high-tech industries in the first place. These are dozens, if not hundreds of thousands of new jobs. At the same time, despite the huge cost, the construction process takes a lot of time (building an aircraft carrier in our country currently requires 7-10 years), respectively, the financing of its construction is very much “separated” in time, and will not be an excessive burden for the annual budget country.

And I really want to hope that some time will pass, and in the future the new Russian aircraft carrier will cut the waves of the World Ocean with its huge body, causing fear and respect of any potential opponents.