Results 2015 year for the Russian Navy: the joys and sorrows 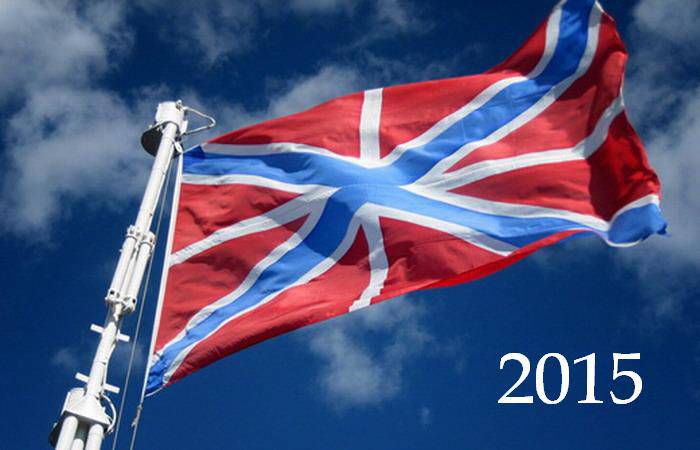 Of course, everything set forth below reflects the blog’s personal view of the events that took place in the past year. The listed “joys” may seem to someone too insignificant (mediocre) for positive emotions, “disappointments” for negative ones, someone probably has their own (personal) list of joys and sorrows. Listed below are events related only to the blog's theme — the general-purpose warships of the ocean and long-distance sea zone, including BMZ ships, which are limitedly suitable for service in the distant waters.

The author wishes all his readers .c a Happy New Year. And wishes all the best to them personally and to the Naval the fleet Russian Federation.

1) the first (successful) combat use of the KNBN 3М14 of the Caliber-NK and Caliber-PL complexes, which marked the formation of the Russian naval forces of non-nuclear deterrence;

2) the successful inter-fleet transition of two PLBs (diesel-electric submarines) marked the beginning of the revival of the submarine forces of the Black Sea Fleet and the Mediterranean Operational Force;

3) transferred to the fleet after a long overhaul two "deficient" multi-purpose submarines: PLAH "Cheetah" and PLAB "Pskov" (SRH "Nerpa" went from outsiders, proving its viability); in the DVZ Zvezda, as of 18.12, another PLAC (Kuzbass) was “ready for a control exit to sea with a subsequent transfer to the OPB”;

4) transferred to the fleet after a long overhaul in the ZVEZA ZVEZA "anti-aircraft" APCR "Tomsk";

5) immediately two nuclear submarines (PLNB Obninsk and Nizhny Novgorod) at the end of the year returned to the PPB from combat service, thereby confirming the combat readiness (status of "active") of multi-purpose nuclear submarine forces of the Russian Navy;

6) completed (completed) the formation of the second naval fighter (fighter-bomber) regiment; in Yeisk, retraining of flight and technical personnel began on MiG-29K (UB) airplanes, whose presence on board the Admiral Kuznetsov TAVKR will allow it to be classified as a multi-purpose aircraft carrier;

7) continue to practice long hikes of combat ships of the 1 rank: the transfer from the Pacific Fleet to the SPM (to the 31.12 - Red Sea) is carried out by the Varyag GRKR ,. with the SF in the Arabian Sea (Karachi) and further in the SPM made the BOD "Vice-Admiral Kulakov" (despite the problems that arose during the VTG GEM);

8) the most distant march (for the ships of its project) for many years was made (commits) by the destroyer “Fast”, the Pacific Fleet, which reached India (28.12 was in Jakarta, on the way back to TUBB);

9) continues the "development" of the Northern Sea Route by the ships of the Northern Fleet - the traditional annual cruise to the New Siberian Islands was carried out by the BPC "Severomorsk", the BDK "George the Victorious" and "Kondopoga";

10) continues to operate on an ongoing basis the Mediterranean operational connection (despite the acute shortage of rank 1-2 ships); with the beginning of the Russian military operation in Syria, the intensity of flights (BS) BDK three fleets (BSF, SF, BF) from Novorossiysk to Tartus increased several times.

11) continue to carry out annual "anti-aircraft" firing of SCRK Granit and Vulcan cruise missiles with outfits from two carriers both on the Northern Fleet and on the Pacific Fleet, thereby demonstrating to the probable enemy the ability of the Russian Navy to counteract its "overwhelming" superiority at sea;

1) TAVKR "Admiral Kuznetsov" not only did not update the air group (at least with one MiG-29K link), but never went out (at the head of the CAG) to the expected BS in the Mediterranean Sea;

2) of the under construction warships of the ocean and distant sea zone, including the BMZ ships, which are partially suitable for service in long-haul waters, only two PLBs (DEPL) of the 06363 avenue were transferred to the total displacement 4600 t (above);

4) terminated the contract on "Mistrals" - ships of this class of domestic construction will appear very soon (despite the acute rejection of the aesthetics of the French DVKD, the author never considered their presence in the Russian Navy as superfluous - the "Mistral" would be very useful for the development of marines forces of the new sample);

5) due to the cessation of deliveries (short supply) of the main engines of imported production and the transition to the production of domestic counterparts for several years the construction of ships of the pr 22350, 11356, 20385 was frozen;

7) not transferred to the Navy and even the sea trials (mooring operations with 09.10) of the head BDK Pr. 11711 "Ivan Gren" were not even started;

8) due to the inability to perform timely VTG by the end of the year, three BODs (Levchenko, Shaposhnikov, Severomorsk) and the destroyer Persistent, not counting the long-standing repair of Tributsa and Chabanenko - as a result, only five (11%) of 11 (total 45) destroyer-class ships are combat-ready (although there is no information on Ushakov);


Oddly enough, the disappointment turned out to be less joy. The reason for this is probably the pre-Christmas mood, perhaps the objective reality. Let's hope that in 2016 and subsequent years, the proportion will steadily shift towards the joys. Once again, happy New Year!

Ctrl Enter
Noticed oshЫbku Highlight text and press. Ctrl + Enter
We are
Coastal Warships: Modern ApproachShips built for 28.07.2013 of the year for the Russian Navy. Part of 1
29 comments
Information
Dear reader, to leave comments on the publication, you must to register.