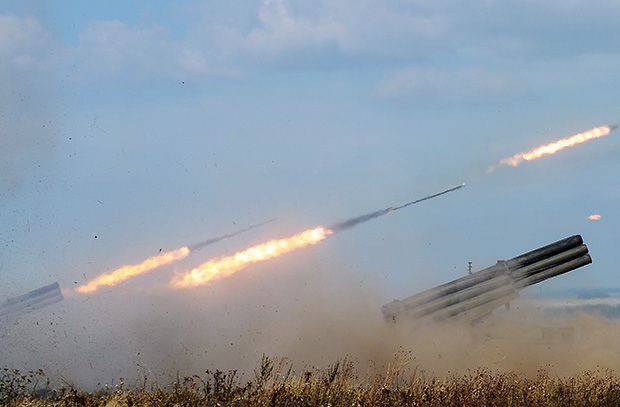 The Uragan rocket launcher provides simultaneous destruction of armored and unarmored targets over an area of ​​about 43 hectares.

Modern multiple launch rocket systems (MLRS) are today one of the main fire weapons of the Russian Ground Forces. In the period from 1941 to 1945, their famous mother Katyusha terrified the German troops and surpassed their towed MLRS installations Nebelwerfer and Wurfrahmen (were put into service in 1940) for mobility and range of destruction. For instant defeat of various targets on large areas, the Russian army is equipped with well-known MLRS and their modified versions of “Grad” (“Tornado-G”), “Hurricane” and “Smerch” (“Tornado-S”).

Currently, the jet system "Hurricane" is considered one of the most famous and common in the armies of the world. The highly mobile "Hurricane" convincingly proved its power and effectiveness in real combat operations in Afghanistan, the North Caucasus and Ukraine, the Middle East and Africa.

MLRS 9К57 "Hurricane" was created at the initiative of the Tula Central Research Institute of Precision Engineering. On the basis of the M-21 field reactive system at the beginning of the 60s of the last century, a more powerful rocket artillery combat vehicle was developed in terms of fire impact and range. On the basis of the project (1964 of the year) in 1967, the scientific work “Creating a high-precision Uragan rocket launcher complex (HB-121-66) confirmed the possibility of creating such an MLRS with specified characteristics.

In the second half of 1968, an advance design was developed, in 1969 – 1970, the tactical and technical requirements for development work were refined. The project envisaged the creation of combat (BM) and transport-charging (TZM) vehicles on a wheeled (ZIL-135LM) and tracked (MT-C) chassis. A variant of TZM based on the KrAZ-253 vehicle was also considered. Practical work allowed to determine the types of warheads for rockets. Alexander Ganichev became the chief designer of the system as a whole, Yuri Kalachnikov was the combat vehicle. In the final version of the MLRS "Hurricane" was adopted and operated with 1975 year. The serial production of the Uragan rocket artillery system was made by the SNPP Splav (Tula) from 1975 to 1991. 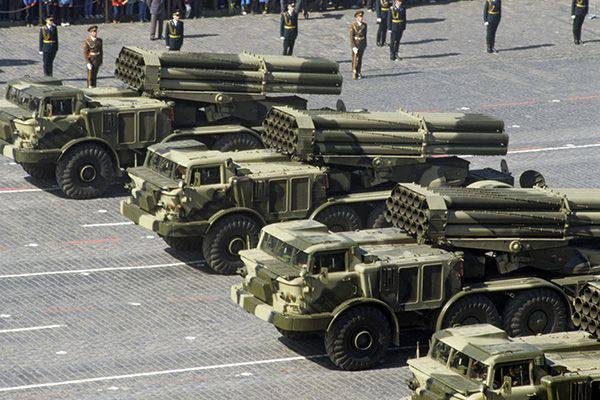 The Soviet rocket launcher system 9K57 "Hurricane" is designed to destroy openly located and sheltered manpower, armored and unarmored vehicles, as well as arealized (artillery, missile and anti-aircraft units, command posts, communications centers, warehouses, bases) and other enemy installations at distances from 8 – 10 to 35 kilometers. In addition, the rocket system "Hurricane" can be used for complete mining of the area using anti-personnel and anti-tank mines.

To solve these problems, the complex has combat, providing and training facilities. The combat elements of the MLRS Uragan include combat (BM, 9P140) and transport-charging (TZM, 9Т452) vehicles, 220-mm missiles and the Kapustnik-B automated fire control system (1B126). Means of combat support - a vehicle for topographic survey (1Т12-2М), a radio-direction-finding meteorological complex (1Б44), a set of special arsenal equipment and tools (9Ф381).

Fighting vehicle (launcher) combat weight 20 tons is used to transport 16 rockets, their launch and hit targets in an area of ​​at least 42 hectares. The artillery unit - a block of 16 tubular guides with sights, guidance mechanisms, communication and control devices - is located on the chassis of a four-axle high-performance automobile ZIL-135ЛМП (wheel formula 8 XX8). A block can be aimed at a target in vertical (5 – 55 degrees) and horizontal (up to 240 degrees) planes. Guides with a U-shaped screw groove give the initial rotation of the projectile for a stable flight along the trajectory. Missiles can be launched in one gulp (0,5 interval of a second) and at a ragged pace (the first eight after 0,5 seconds, the next after 2 seconds). In the latter case, the frequency of oscillations of the BM decreases and the accuracy of shooting increases. A four-person calculation (in peacetime) ensures that the installation is placed in a combat position, leaving the firing position and reloading the ammunition during 3, 1,5 and 15 minutes, respectively.

TZM (9Т452) on the same wheelbase provides loading and unloading of the launcher. Recharging BM ammunition from 16 rockets is made within 15 minutes. When fully loaded, the BM and TZM can move along the highway with a maximum speed of up to 65 km / h and, without prior preparation, can cross the fords to a depth of 1,2 meters. The fuel reserve is enough for 500 kilometers.

To solve problems, the launcher can use rockets with high-explosive fragmentation (9М27Ф), cluster (9М27К) with fragmentation combat elements, incendiary (9М27С) and volume-detonating (9М51) headpieces. Depending on the problem being solved, their mass ranges from 89,5 to 99 kg. For remote mining of terrain, rockets are used with a cluster head for anti-tank (9М59) or anti-personnel (9М27К2, 9М27К3) min. For the moral and psychological impact on the enemy, the "Hurricane" can use a projectile (9М27Д), the head of which is equipped with campaign materials.

The Uragan artillery jet system works flawlessly at external temperatures from –40 to + 50ºС, winds up to 20 m / s, high humidity and dustiness of air at altitudes up to 3 thousand meters above sea level. It can solve combat missions in terms of the use of nuclear, chemical and biological weapons at any time of the year and day in weather-climatic conditions of any region of the world, where it can be delivered by any type of transport. The system is constantly being upgraded to increase combat capabilities.

Combat use of the MLRS "Uragan"

The baptism of the MLRS "Uragan" took place in Afghanistan - the Mujahideen called it "Shaitan Pipe" and were very afraid. “Hurricane” has demonstrated its effectiveness in South Africa and in the Syria-Israel war in the early 80s. The fire system was used against separatist illegal armed groups in the Chechen Republic and during the Georgian-South Ossetian conflict of the 2008 year. In 2014 – 2015, the Uragan rocket system on KrAZ-6322 was actively used by the Ukrainian armed forces in the south-east of the country, as well as militiamen who captured several launchers in battles.

High efficiency and operational reliability of the MLRS "Uragan" guarantee its use as a fire weapon of destruction in the next 10 – 15 years.