The Daily Beast: The United States is increasingly fearful of the newly awakened Russian fleet

January 12 2016
34
Within the framework of the current program for the modernization of the Russian armed forces, a huge number of various projects are being implemented, during which new facilities are built, equipment and weapons are supplied, etc. A special place in the rearmament program is occupied by the navy, which is already receiving new ships, boats, submarines, auxiliary vessels, etc. Update fleet will continue in the foreseeable future, which will lead to a noticeable increase in its combat effectiveness. In addition, all these processes lead to an increase in anxiety of foreign specialists.


In late December, the American press reported on the report of the Naval Intelligence Agency of the US Navy, which discusses the features of the update of the Russian fleet and the consequences of such processes from the point of view of international relations. As it turned out, all this becomes a cause for concern. This is how the observed situation is interpreted in an article in The Daily Beast entitled “US Fears Growing a Newly Awakened Russian Navy” (“The US is increasingly afraid of the newly awakened Russian fleet”) by David Aks, published on 28 last December.

In the subtitle of the article, the author writes that the new report of the intelligence service of the US Navy paints a sobering picture of the growing aggressiveness of the Russian fleet, which turns out to be a deadly demonstration of force. 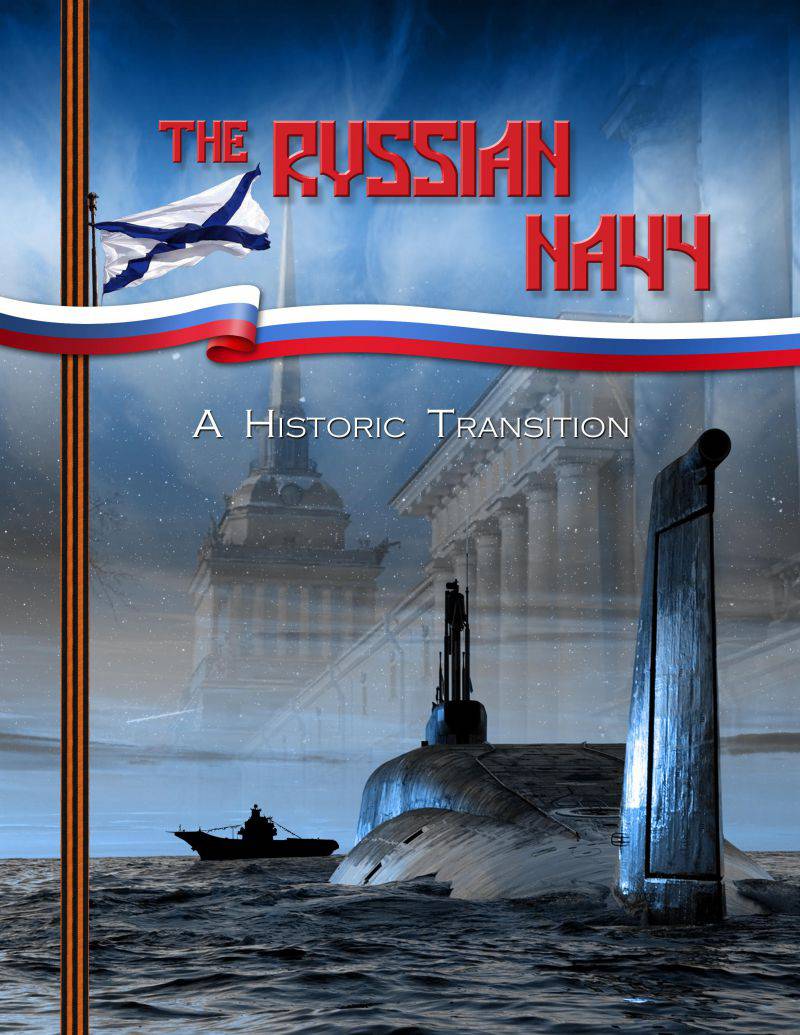 D. Ex reminds that the intelligence of the American fleet for the first time in 24 of the year published a report on the current state of the Russian Navy. This document testifies to the rapid rearmament of the Russian fleet and the associated increase in aggressiveness.

According to a published report, the modernization program of the Russian fleet has been going on for several years, and recent events clearly demonstrate its success. Moreover, every day there is less doubt that with the help of serious support from Russian President Vladimir Putin, the fleet is doing everything possible to compete with the world's largest and most powerful maritime power - the United States.

The author of The Daily Beast quotes the report: “Russia has already begun work, and over the next decade will make great progress in building a 21st century fleet capable of providing national defense, as well as having an impressive, but limited, presence in remote areas and staffed by a new generation Post-Soviet sailors and officers. "

The report itself, entitled “The Russian Navy: A Historic Transition,” takes up 68 pages and is accompanied by a host of illustrations. The document was published in mid-December last year and is available for review to everyone. The author of the report is George Fedoroff, an employee of the Maryland department of the Office of Naval Intelligence and a leading specialist in the Russian Navy. D. Ex reminds that J. Fedoroff began his career as a linguist for the naval forces, but later went to work in reconnaissance. Also, the author of The Daily Beast notes that, unlike other intelligence specialists, J. Fedoroff, apparently, never stopped studying the Russian fleet.

For two and a half decades, the Department of Naval Intelligence did not publish reports on the state of the Russian Navy. Understanding Soviet Naval Developments reports were published before 1991, when the Soviet Union collapsed. Due to the collapse of the state, independent Russia received a large number of ships, ships, submarines and naval bases, but due to lack of funding, they all stood idle.

Only during the reign of President Vladimir Putin began the restoration of the Navy. One of the results of this was the events of the beginning of 2014 of the year, when the fleet supported the "lightning invasion of the strategic Ukrainian peninsula of Crimea". According to D. Ax, this step could be evidence of the future return of Russia as a major military force. At about the same time, the Pentagon decided that now it was worth renewing the old “tradition” and re-starting to compile and publish reports on the state of the Russian fleet.

According to D. Aks, at that time only one expert could cope with the compilation of a new report: experienced analyst Norman Polmar, who participated in writing Understanding Soviet Naval Developments, as early as the mid-seventies. It was he who recommended the Directorate of Naval Intelligence to commission the compilation of a new report to J. Fedoroff. Subsequently, N. Polmar highly appreciated the work of his “protege”.

The task of the report was to study the available data on the status and rearmament of the Russian Navy in terms of the quantity and quality of equipment, weapons, etc. It was also necessary to evaluate the training of personnel and take into account the role of the fleet in the military and political system. The result of this work was the conclusion of a “rebound”: Russia is indeed reviving its fleet and has achieved some success.

The final report stated that since 2000, after stabilization of the economy, the Russian leadership began to take measures, primarily of a financial nature, aimed at “revitalizing” the army and navy. All this made it possible to continue the implementation of programs, the implementation of which was delayed, as well as start some new projects. As a result, the full-fledged construction of the 21st century fleet began with modern surface and underwater platforms.

The beginning of the last decade was nadir in stories Russian fleet. Only a small number of ships could go to sea and solve tasks. Today, the fleet includes 186 ships and submarines, which are responsible for the Atlantic and Pacific oceans, as well as the Black, Baltic, Caspian and Mediterranean seas. In addition, there is the possibility of combat work in the Arctic.

According to the calculations of the author of the report, at present the Russian Navy is the third in the world in terms of combat strength. With 186 ships and submarines, the Russian fleet is second only to the US (280 warships and about a hundred auxiliary vessels) and to the Chinese.

D. Eks points out that in some key areas the Russian fleet in recent years has managed not only to restore its former potential, but also to catch up with world leaders. Last October, ships of the Caspian Flotilla conducted a mass launch of Caliber cruise missiles, which flew about a thousand miles and hit targets in Syria. In December, the submarine "Rostov-on-Don" performed a similar task, hitting Syrian targets from the Mediterranean.

The author of The Daily Beast reminds that before these operations, only the US Navy had demonstrated the possibility of attacking ground targets using modern long-range cruise missiles launched from ships or submarines. Sea-based cruise missiles, notes D. Ex, are one of the key means of delivering accurate strikes at enemy targets with reduced risks for their armed forces. 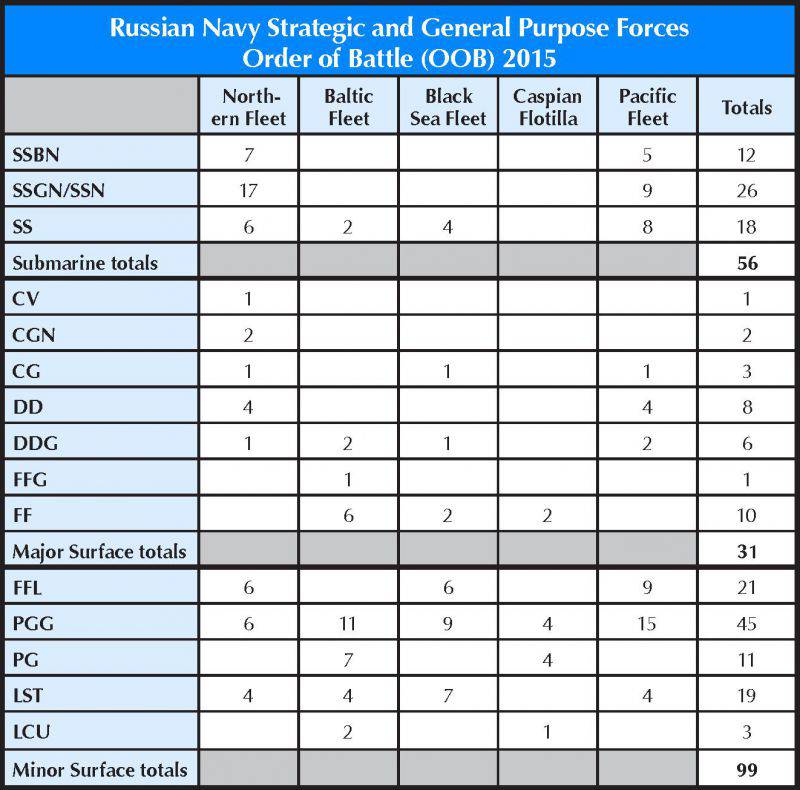 It is noteworthy that the newest Caliber cruise missiles are mentioned in the new report “The Russian Navy: A Historic Transition” several times. Among other things, J. Fedoroff writes that such weapons can give an impressive impact potential even to “modest platforms,” such as corvettes. In addition, it provides the ability to attack stationary objects of the enemy using conventional combat units. According to the author of the report, with the mass use of Caliber family missiles, the Russian Navy gets new abilities to deter or threaten and destroy enemy targets.

At the end of his article, the author of the publication The Daily Beast raises a curious topic, indirectly related to reports of American intelligence on the state of the Russian fleet. For example, an independent analyst in the field of the navy, Eric Wertheim, quoted by D. Eks, recalls that the authors of the 1991 report “Understanding Soviet Naval Developments” expected the future appearance of new “intellectual” ammunition, such as the current rocket, for XNUMX. Caliber". As a result, according to E. Wertheim, the situation looks as if time has stopped for two decades that have passed between two reports, and now the Russian Navy has gone out of sleep. The latest report allows you to sum up the first results of the work of the "awakened" Russian fleet.

As mentioned above, the report of the Directorate of Naval Intelligence “The Russian Navy: A Historic Transition” occupies 68 pages. It contains several sections on the history of the Russian Navy, the current state, structure, strategies, modernization and other issues. For obvious reasons, D. Ex did not consider in his article all the topics of the report and limited himself to the most basic ones. However, this does not make the entire report less interesting to the general public.

Unable to examine the entire report in detail, the author of The Daily Beast focused on two of the most interesting features of the modernization of the Russian Navy, namely, the general progress of fleet renewal and the development of the latest guided missiles with uniquely high characteristics.

According to the author of the report and D. Aks, over a decade and a half, the number of combat-ready ships and submarines of the Russian fleet has increased several times: to 186 units, which allows solving problems in various water areas near the borders of the country. In addition, there is some potential for work in remote areas of the oceans. Such a pace of development is indeed one of the most interesting features of the current modernization program.

The second theme, on which D. Eks drew attention, was the rocket of the Caliber family. In the fall and winter, the Russian Navy demonstrated its potential several times. weaponsSome of the features of such “shows” were a real surprise for both domestic and foreign specialists. For example, before the autumn launches there was no exact information about the flight range of the newest missiles. After the attacks of targets in Syria, no one left any doubt that ships and submarines with “Gauges” on board are a promising and promising means of non-nuclear deterrence and are able to influence the situation in relatively large regions.

According to the report “The Russian Navy: A Historic Transition”, it is now in third place in the world in terms of the combat strength of the Russian Navy, second only to the US and Chinese Navy. Also, it should be noted that the positive assessments of the report and the publication of The Daily Beast look very nice, as they come from the main competitor and the world leader. In addition, this situation leads to the appearance of loud headlines, talking about the concern of this competitor and leader. Indeed, the “recent awakening” of the Russian fleet must be disturbed by many third countries.


The article “US Fears Growth of a Newly Awakened Russian Navy”:
http://thedailybeast.com/articles/2015/12/28/u-s-fears-grow-of-a-newly-awakened-russian-navy.html