The Washington Post: a new Russian unmanned underwater vehicle should raise the alarm

January 12 2016
33
Over the years, the development of Russian strategic nuclear forces has excited the minds of foreign politicians, military, experts and the general public. Moreover, Russia regularly implements various programs and launches new projects, which become another cause for concern for foreign specialists. Not so long ago, one of these reasons was a certain project of the multifunctional underwater vehicle “Status-6”, which, according to some data, can be equipped with a nuclear warhead. Despite the specific situation with the lack of information, this development still attracts the interest of specialists and the public, and also becomes a reason for the emergence of concerned publications in the press.


27 December The American edition of The Washington Post published an article entitled “New Russian unmanned underwater vehicle should raise the alarm”), which outlines the features of Moscow’s official plans for nuclear power development. in part of some new projects. As is clear from the title, the authors of the material came to not very pleasant and optimistic conclusions.

The authors of The Washington Post begin their article with a reminder of strategies to use nuclear weapons. They note that since its inception, nuclear weapon It was proposed for the destruction of two main classes of targets: military facilities and cities with industrial enterprises. So, the only cases of real combat use of atomic bombs were the attack of cities (Japanese Hiroshima and Nagasaki, August 1945 of the year). Shortly after the end of the Second World War between the United States and the Soviet Union, the Cold War began, during which the strategy of using nuclear forces was based on the principles mentioned above. 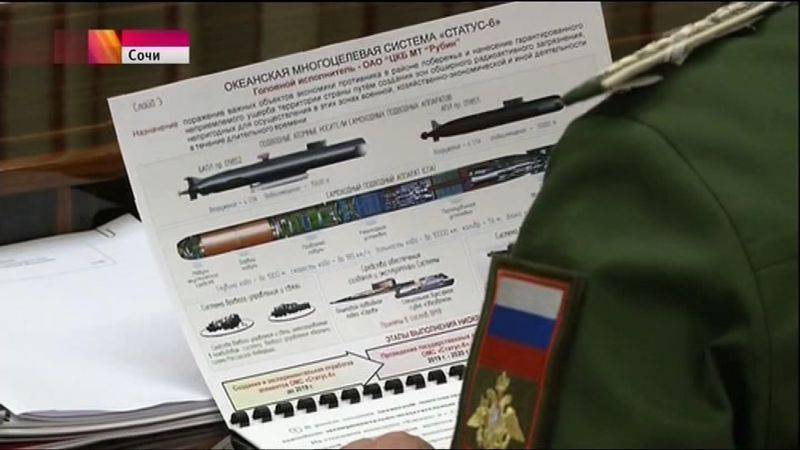 Most strategic missiles with nuclear warheads were aimed at military targets, primarily enemy missile bases. Such a strategy in foreign practice is referred to as Counterforce. In turn, a smaller part of the deployed missiles was aimed at cities and industrial enterprises. Nevertheless, it was the possible use of rockets against cities that was firmly established in the public consciousness, and also became one of the foundations of the concept of mutual guaranteed destruction, in which the two superpowers constantly held each other at gunpoint.

The atomic bomb as a city destroyer has always been a great ground for fear. Fortunately, American journalists say, the number of nuclear warheads has significantly decreased in the past two decades. Nevertheless, in their opinion, someone wants to return the already gone into history the era of "nuclear fear", which is why the corresponding question arises: who wants it? The answer to this question, in the opinion of the editors of The Washington Post, may be the last news from Russia.

More recently, it became known that the Russian industry is creating a promising unmanned submersible. In November last year, Russian President Vladimir Putin met with the leaders of the military and defense industry in Sochi. During this event, the operator of one of the television channels captured the participant of the meeting, who was holding a sheet with charts and some data on the “ocean multi-purpose system” project under the designation “Status-6”. Shortly after a similar disclosure of information about the project, representatives of the Kremlin said that information about this development should not have been made public, and the corresponding cadres disappeared from the reports. However, by this time a single frame of great interest had spread across the global network.

According to American authors, Russia is creating a tactical nuclear weapons system that will be able to penetrate the harbor imperceptibly and destroy the target with the help of the undermining of a warhead and the subsequent formation of a large wave. This method of attack can be used to attack naval bases of surface ships or submarines. In addition, it is possible to cause some damage to coastal cities and their enterprises. According to data from the November meeting, the main task of the Status-6 system is “defeating important objects of the enemy’s economy in the coastal area and causing guaranteed unacceptable damage to the country’s territory by creating zones of extensive radioactive contamination unsuitable for military, economic and a different activity for a long time. "

The authors of The Washington Post remind that there are currently no international treaties regulating the development of tactical nuclear weapons. The Status-6 system falls into this category and, as a result, does not fall under any existing restrictions. In addition, it is noted that the United States, Russia and China are currently engaged in the active development of their conventional and nuclear weapons.

Despite the lack of information on the promising Russian project, the article “Russia should raise alarm bells” contains some assumptions about the prerequisites for its appearance. The Washington Post journalists suggest that the Status-6 project may be another expression of V. Putin’s desire to respond to the US missile defense system with asymmetric measures. If this is true, then American journalists see it as a threat. The emergence of unmanned underwater vehicles can expand the threat of a nuclear attack and bring them to completely new areas.

At the end of their article, American authors complain about the current, as it seems to them, situation in Russia. They regret that in Moscow there will not be much debate about a promising project. According to them, “Mr. Putin” controls the media and parliament, which is why his “military adventures” are almost not controlled.

As you can see, the project of the ocean multi-purpose system "Status-6" continues to be a relevant topic. The first and, as it turned out soon, the latest data about him appeared quite a long time ago, but it still remains the topic of active discussions, and also leads to the appearance of relevant publications in the press. It is worth recalling once again that all disputes and discussions began with the accidental diversion of just one slide from the presentation, which one of the participants in the meeting in Sochi got acquainted with.

Like many other foreign publications on the development of the Russian armed forces, The Washington Post’s “New Energy and Peaceful Behavior” article is filled with “politically literate” clichés relevant to the current international situation, such as Mr. Putin’s “military adventures” etc., but still not devoid of logical and sensible thoughts.

The authors of the publication quite rightly point out that the appearance of an underwater unmanned vehicle that is capable of carrying a nuclear warhead and playing the role of a superpowerful torpedo can significantly change the situation on the seas and in coastal zones. These fighting qualities make the Status 6 project a serious concern. An additional factor aggravating the situation is the absence of international agreements governing the creation and deployment of tactical nuclear weapons, which, as expected, will be the prospective Russian system.

Interesting findings of American journalists concerning the prerequisites for the emergence of the project "Status-6". According to them, a promising underwater vehicle could be the next asymmetric response to the construction and deployment of the United States missile defense system. It must be admitted that this version has the right to life. The Russian leadership has repeatedly stated plans to respond to the US missile defense system with asymmetric methods. In the context of the latest news, this means that in the event of a weakening of the retaliatory strike of intercontinental missiles by means of a missile defense system of a probable enemy, a strike at the naval bases will be carried out with the help of unmanned aerial vehicles with nuclear warheads. At the same time, effective counteraction against such systems is associated with a host of difficulties of various kinds.

The first and last information about the status-6 ocean multi-purpose system appeared in early November last year, after which the new information did not fall into open access. Nevertheless, despite the lack of information, domestic and foreign experts continue to discuss an interesting topic and come to certain conclusions. According to the authors of The Washington Post, expressed in a recent article, the new Russian project should be cause for alarm.

Ctrl Enter
Noticed oshЫbku Highlight text and press. Ctrl + Enter
We are
About the future of underwater roboticsThe Washington Free Beacon: Russia is building an unmanned submarine with nuclear weapons
33 comments
Information
Dear reader, to leave comments on the publication, you must to register.