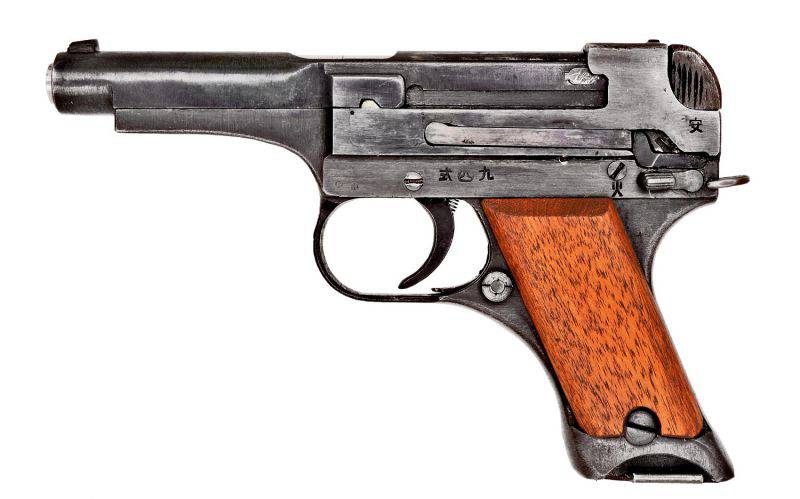 Kijiro Nambu is sometimes called Japanese John Browning. He made a huge contribution to the development of many samples of small weaponswhich was used by the imperial Japanese army during the Second World War. Nevertheless, it should be noted that the development of Browning is still appreciated for its durability and simplicity of design, and the Nambu weapons were often complex, not very convenient, and not always reliable.

HistoryPistols.ru has already talked about the Japanese Nambu pistol Type 14 (Nambu Taisho 14) and its varieties. This gun was successfully used in the Japanese army, but it was rather bulky and heavy. The desire to create a lighter and more compact weapon led to the emergence of a Nambu 94 pistol (Nambu Type 94 Pistol). 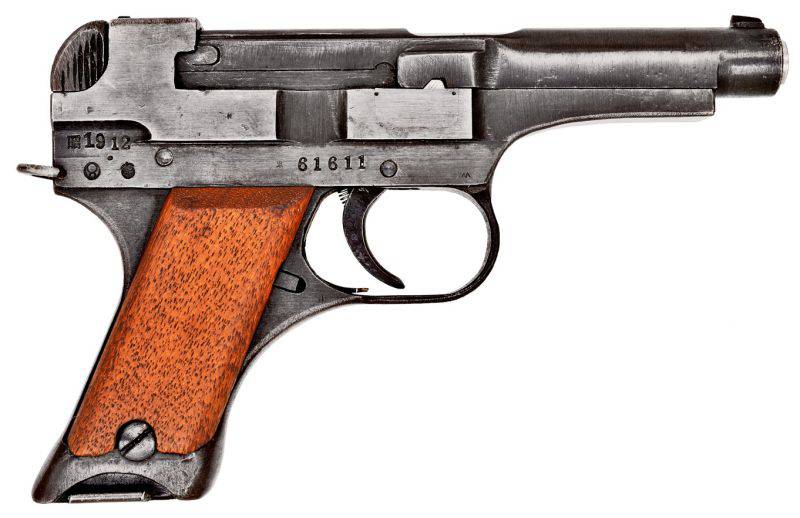 In the literature there is an opinion that the Nambu Type 94 pistol is rather ugly and one of the worst military pistols of the Second World War.

Of course, this weapon is not the best in terms of functionality and design, but its original and unconventional design and today attracts the attention of collectors and fans. stories weapons. 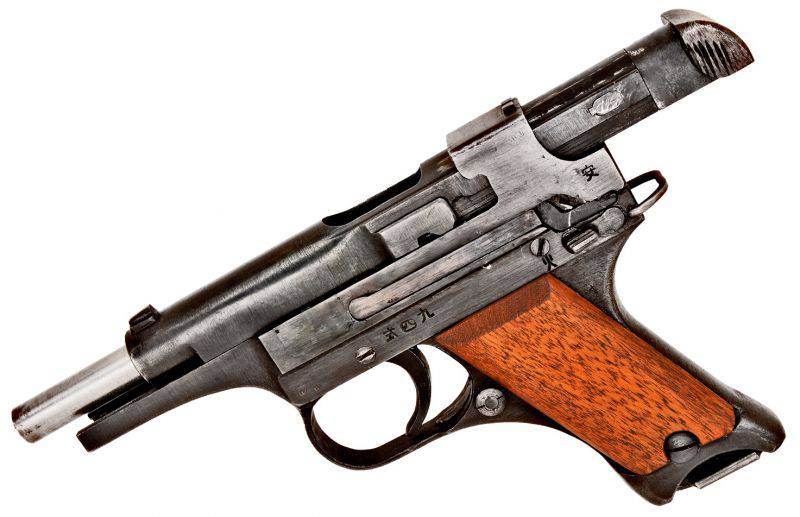 Some researchers claim that the NNambu 94 pistol was originally created as a commercial model and was intended for export to South America. 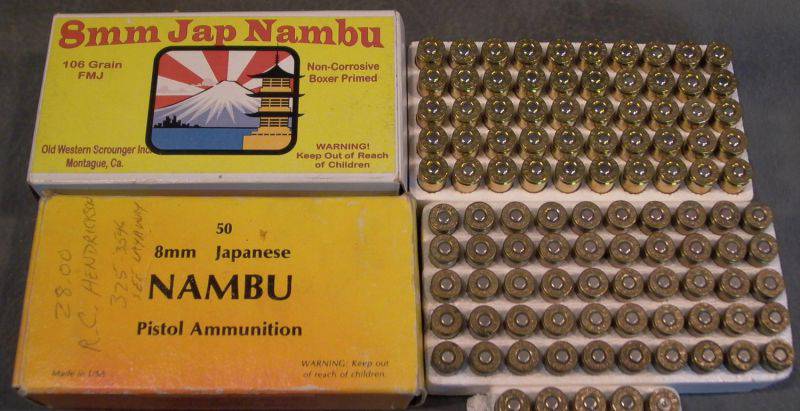 The gun was developed under the usual in the land of the rising sun 8 mm Nambu cartridges (8 × 22mm Nambu). These munitions were not very common in other countries of the world. It is unlikely that the Japanese were so naive to believe that the weapon will be popular and in demand in the countries of South America. Most likely the gun was created as a personal weapon for pilots and tank crews who needed compact weapons in conditions of small dimensions of combat vehicles. 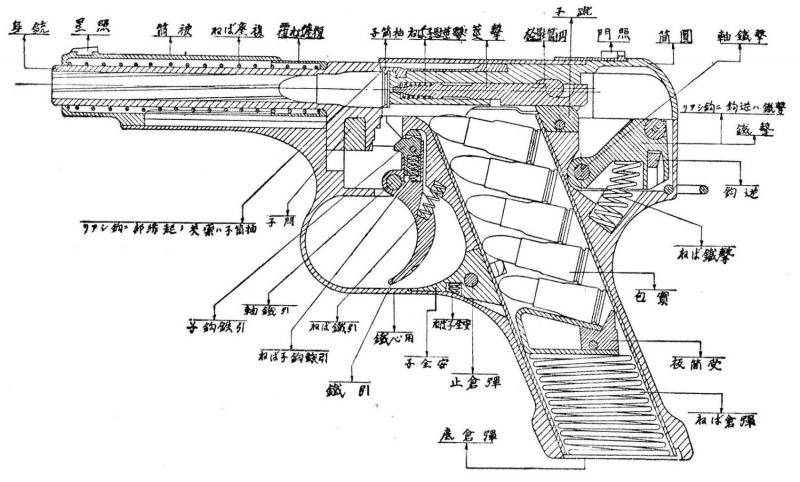 In 1934, the pistol was first adopted in tank troops and air forces of the Imperial Japanese Army, and shortly before the outbreak of war in China in July 1937 and in the ground units. The Nambu pistol received the Type 94 designation, according to the last digits of the year it entered service. 1934 in Japanese chronology is 2594 (from 660 BC, when the first emperor of Japan ascended the throne). Serial production of weapons began in 1935, at the Nambu Rifle Manufacturing Company. 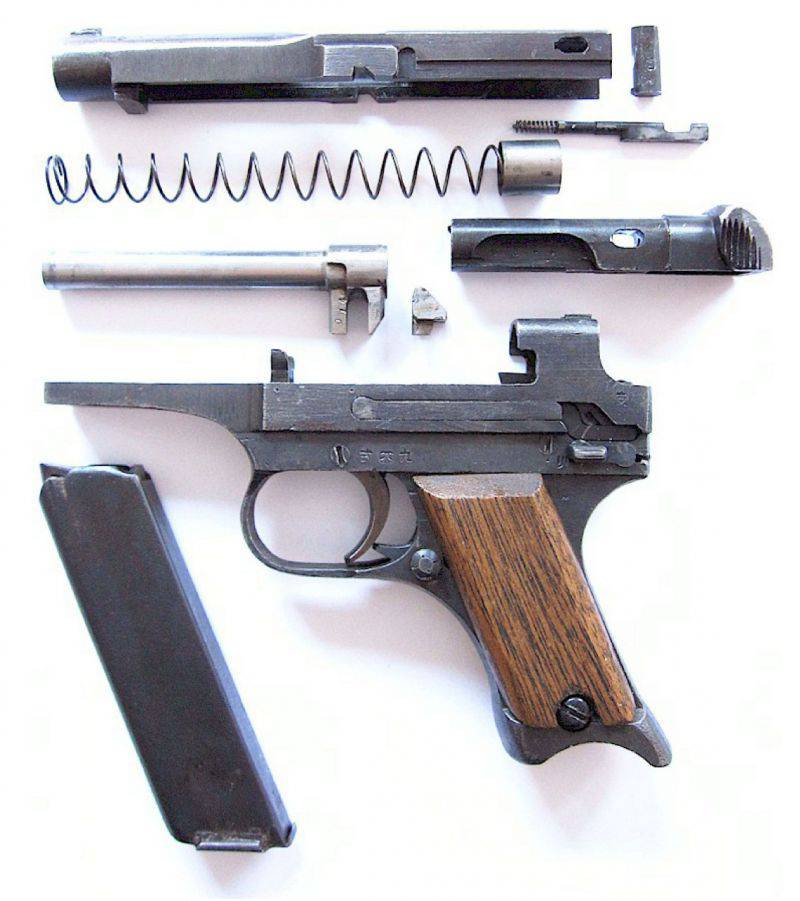 The Nambu 94 Pistol (Nambu Type 94 Pistol) consists of four main components: a frame with a handle, an outer casing with a bolt, a barrel with a locking mechanism, and a magazine. Box magazine single-row pistol, designed for 6 cartridges. The magazine release button is located on the left side of the handle, in front of the trigger guard. 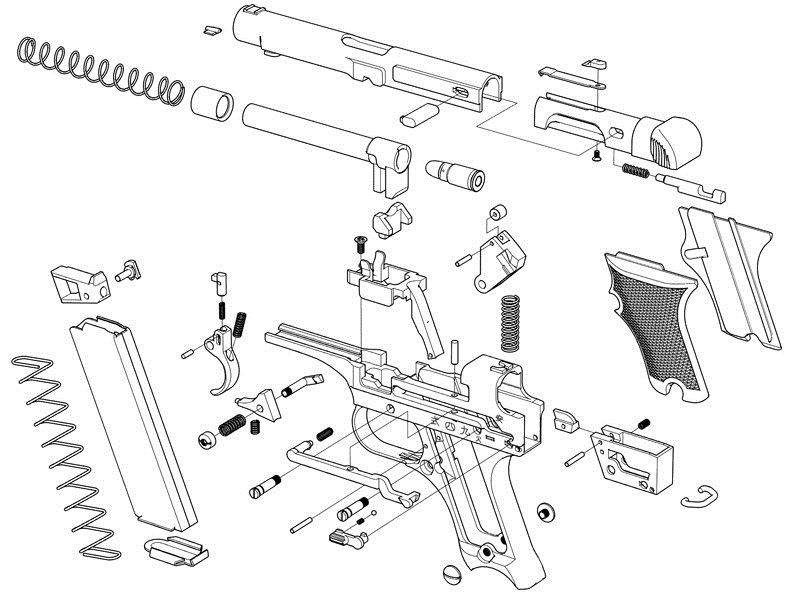 Automatic Nambu gun Type 94 uses recoil energy in the short course of the barrel. Coupling the bolt with the barrel is due to the vertically sliding wedge, which is located in the slot of the protrusion under the chamber. Shutter pistol rather unusual design. It consists of two parts - the outer casing and the shutter itself, which is installed in the back of the casing. The outer casing is connected to the bolt with a transverse pin. 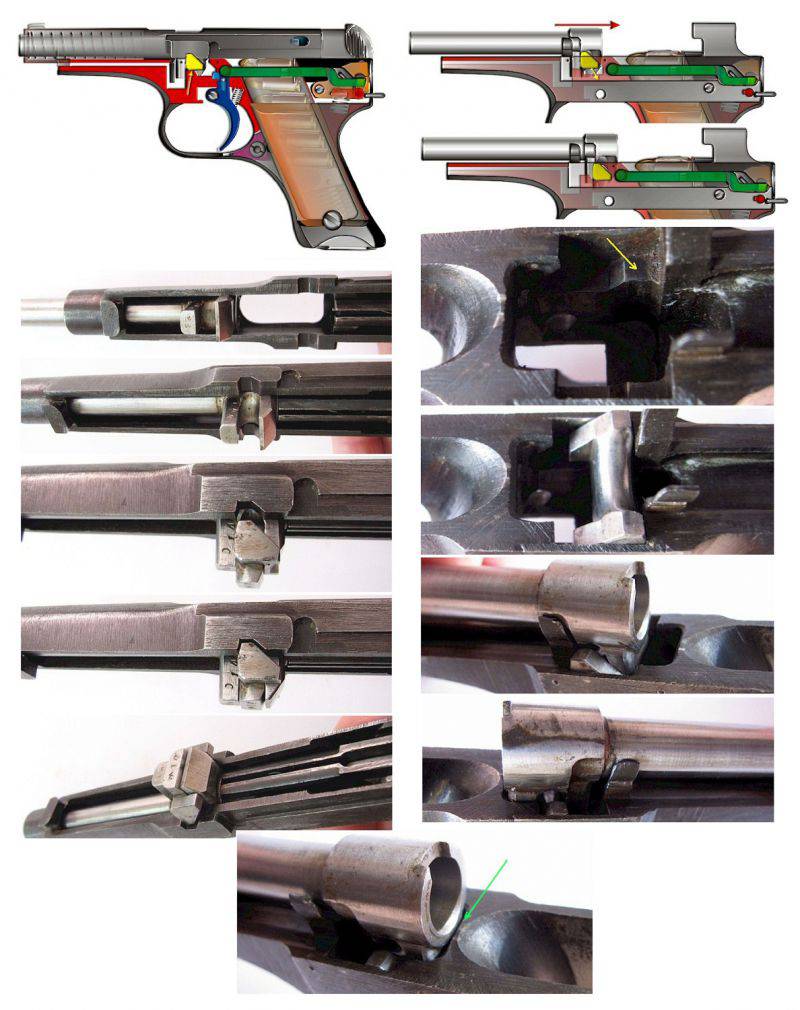 In the extreme forward position of the barrel and shutter, the locking wedge is at the top point, and is held by the protrusion of the frame. In this position, the side projections of the wedge enter the grooves in the walls of the bolt. After the shot, the barrel and bolt move back together for the first time. After some distance, locking the wedge, due to the bevels of the pistol frame, goes down, releasing the bolt. After disengagement, the barrel stops and the bolt continues to move to the extreme rear position. When this happens removing the liner from the chamber and cocking. Further, under the action of a return spring, the bolt begins to move forward, while sending the cartridge from the magazine to the chamber. 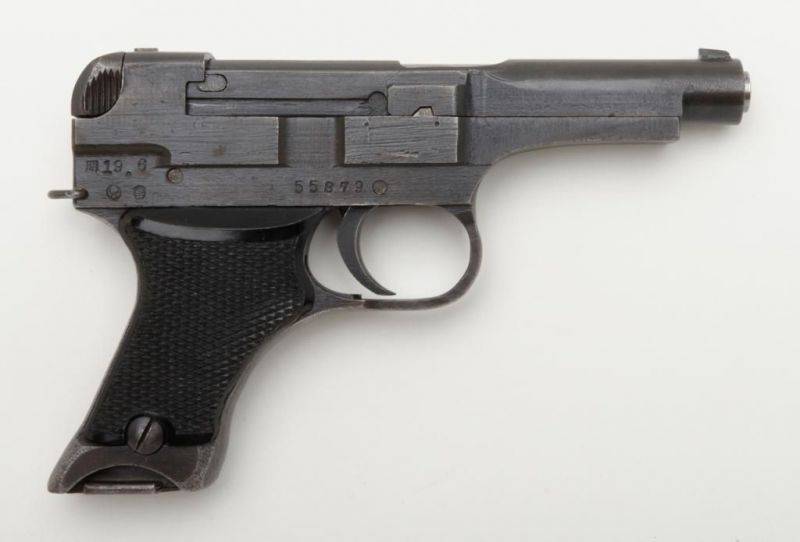 The trigger mechanism of the pistol single action, with a hidden trigger. The trigger pull connecting the trigger and the sear is located openly on the left side of the frame and moves in a transverse plane, so that when the trigger is cocked, accidentally pressing the pull can cause an unexpected shot, even without pressing the trigger.

Manual safety is located on the frame on the left, above the cheek handles. To control the use of ammunition, the design of the pistol provides a slide delay. After the ammunition runs out in the weapon, the protrusion of the magazine feeder locks the bolt in the rear position. 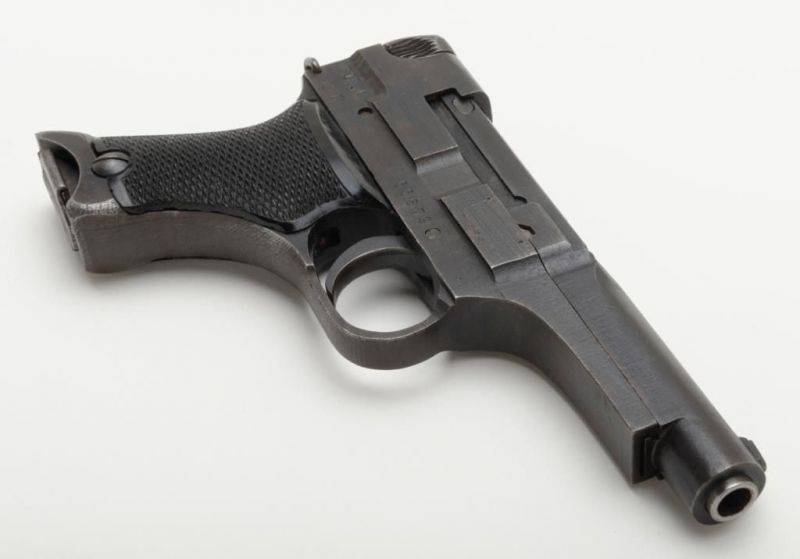 When the shooter retrieves an empty magazine, the pistol bolt closes under the action of the return spring. For this reason, after installing a new magazine with cartridges, before producing the first shot, it is necessary to distort the bolt, sending the cartridge to the chamber. Such a design of the slide delay sometimes causes the magazine to become jammed due to the strong return spring. After that, in order to extract the magazine from the pistol grip, the shooter has to put considerable effort. 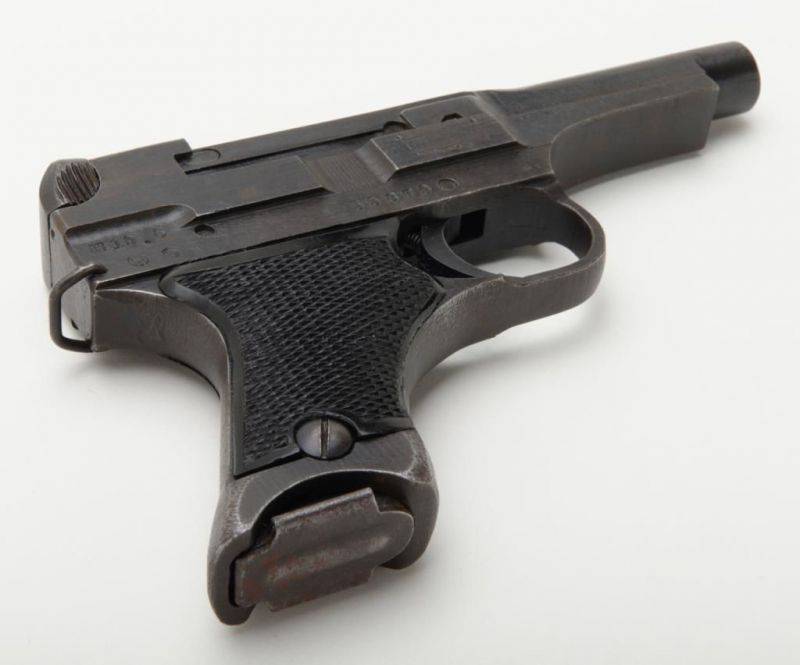 The cheeks of the pistol grip, usually plastic, with a diamond-shaped notch. Weapons made after the first half of the 1944 year, in order to save, was equipped with wooden cheeks arms without any notches. The cheeks of the handle are mounted in the frame due to the upper ledge, which is included in the groove of the frame, and the bottom screw. This method of attachment resembles a pistol Parabellum. 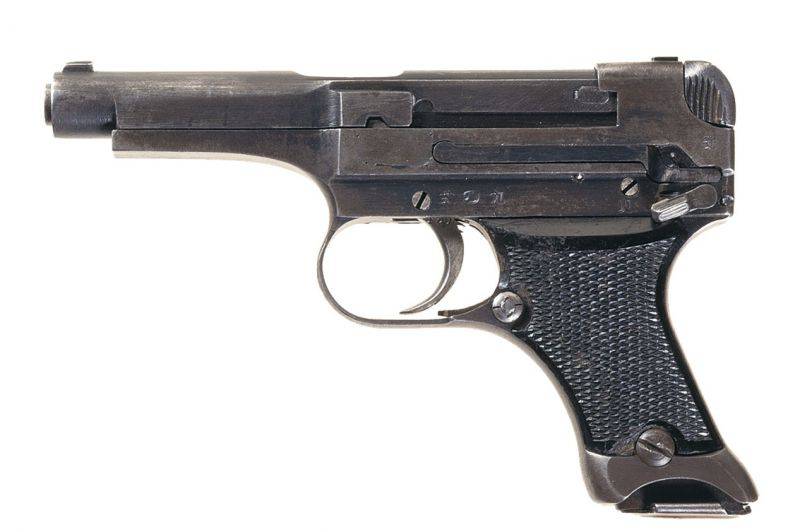 The total length of the gun 186 mm, height 116 mm, length of the barrel 96 mm, length of the aiming line 117 mm, weight of weapons without 750 ammunition gr. The barrel of a Nambu Type 94 pistol has six right-angled rifling. The pistol grip is rather small for a hand of an average European, but for a small Japanese brush it was just right. The angle of the grip and the overall ergonomics of the weapon, oddly enough, is quite good. 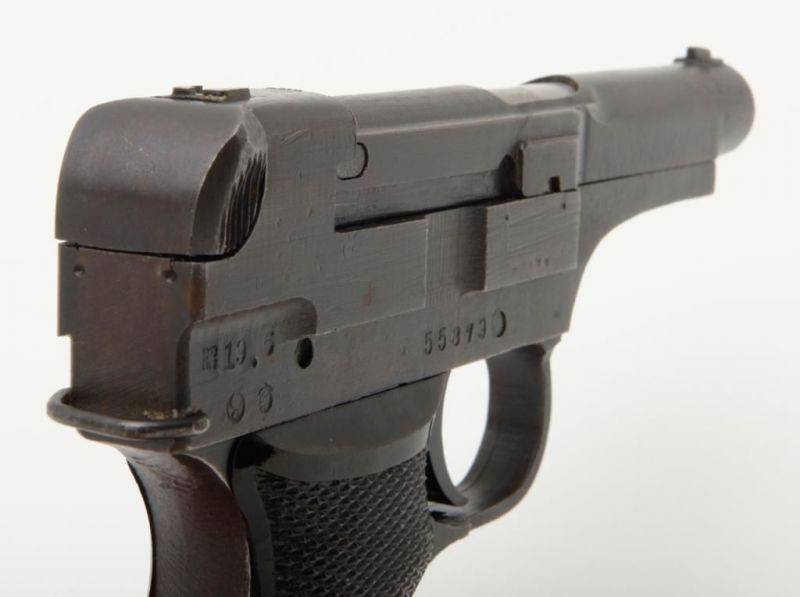 To the rear of the frame just above the handle is attached antabka, which is a trapezoid-shaped bracket. 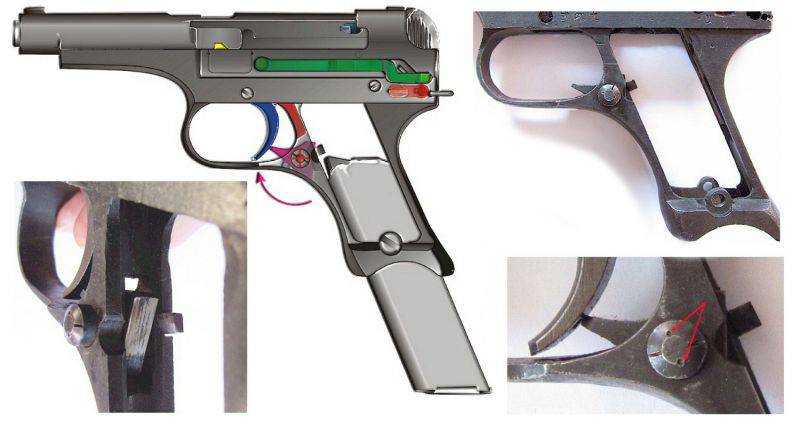 An oval-shaped extraction window is located in the casing of the bolt on top. Removing the sleeve is up, due to the reflector installed in the frame of the gun. Sights fixed. The front sight is mounted on the upper part of the shutter casing, the rear sight is placed on the upper ledge of the frame. The front sight and rear sight are small in height, and therefore aiming from the weapon is inconvenient. 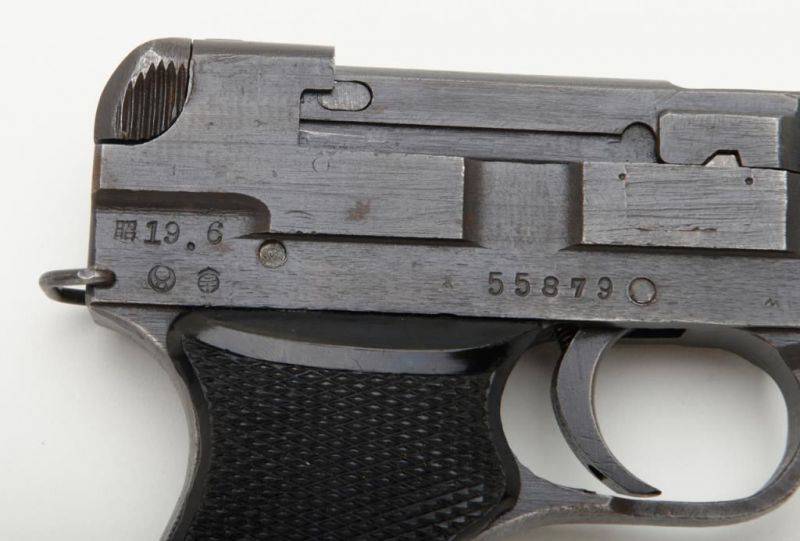 Marking Japanese weapons is not quite familiar to Europeans. On the right side of the frame in the tail section there is a marking in the form of a hieroglyph, indicating the era of the reign of Emperor Hirohito. After it are two digits "19.6" - this is the year and month of release of the gun. The year is specified in Japanese chronology. In order to determine the year of manufacture of a particular gun, add 25 to the first digit. Accordingly, the gun presented on the photo was made in June 1944. The serial number of the 55879 pistol is marked on the frame above the trigger guard. 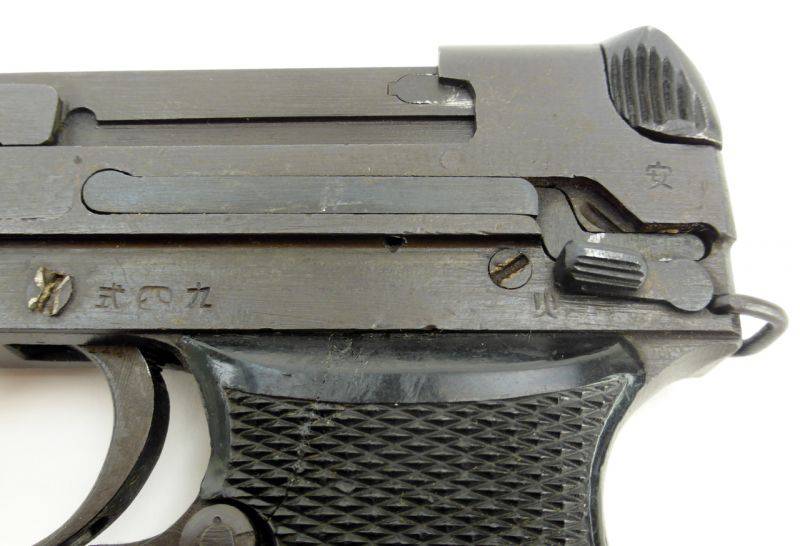 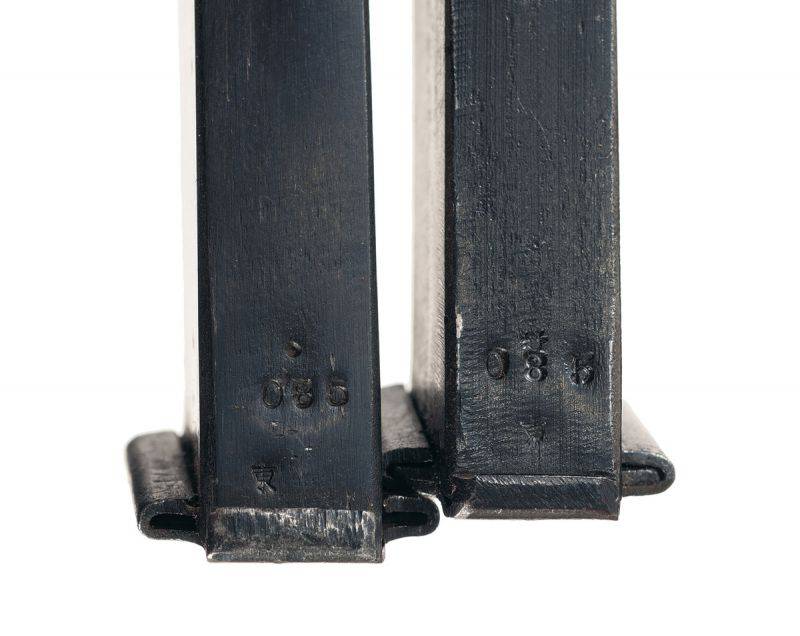 The last digits of the serial number are printed on the back of the gun stores. 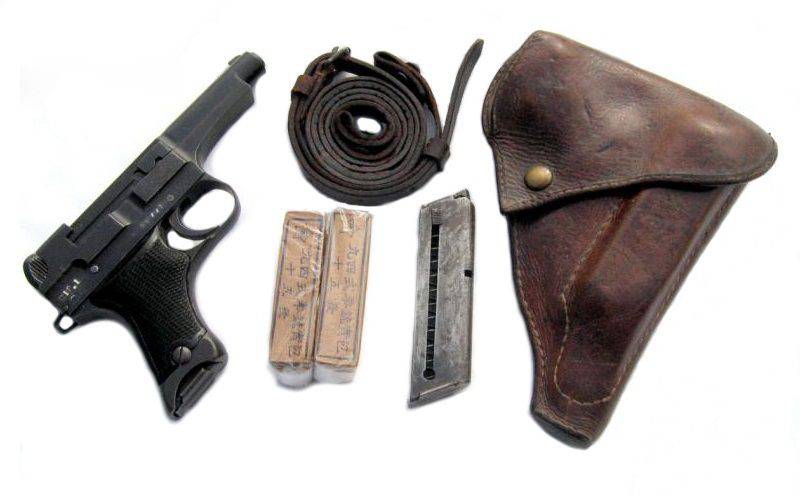 The Nambu gun 94 was equipped with a holster and a spare shop. The holster could be made of genuine leather or canvas. Canvas holsters were probably made at the end of the war, when the resources of the empire were exhausted and it was necessary to save on everything. 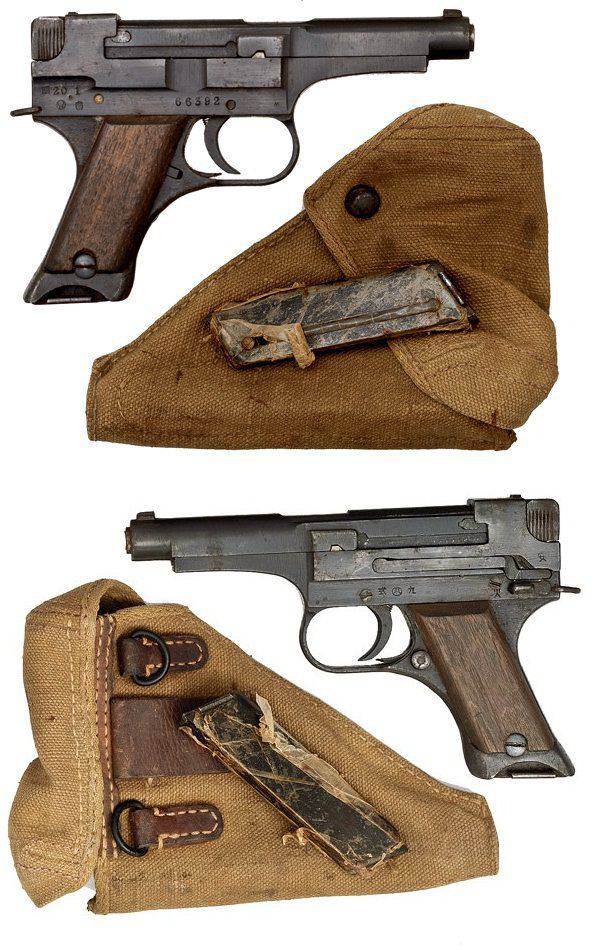 Most researchers estimate the NNambu 94 Pistol as an under-performing weapon for use in the military. Low-power 8 mm cartridge does not quite meet the criteria for military ammunition. Almost all experts note the difficulty in handling and maintaining the Nambu 94. The biggest complaints about the safety of the gun. Design features of the firing mechanism lead to the fact that the Nambu 94, when a pistol is dropped or even a weak blow to the weapon, can allow an accidental shot without pressing the trigger. Historians also note the flaws of the factory assembly, especially in the last years of the war. 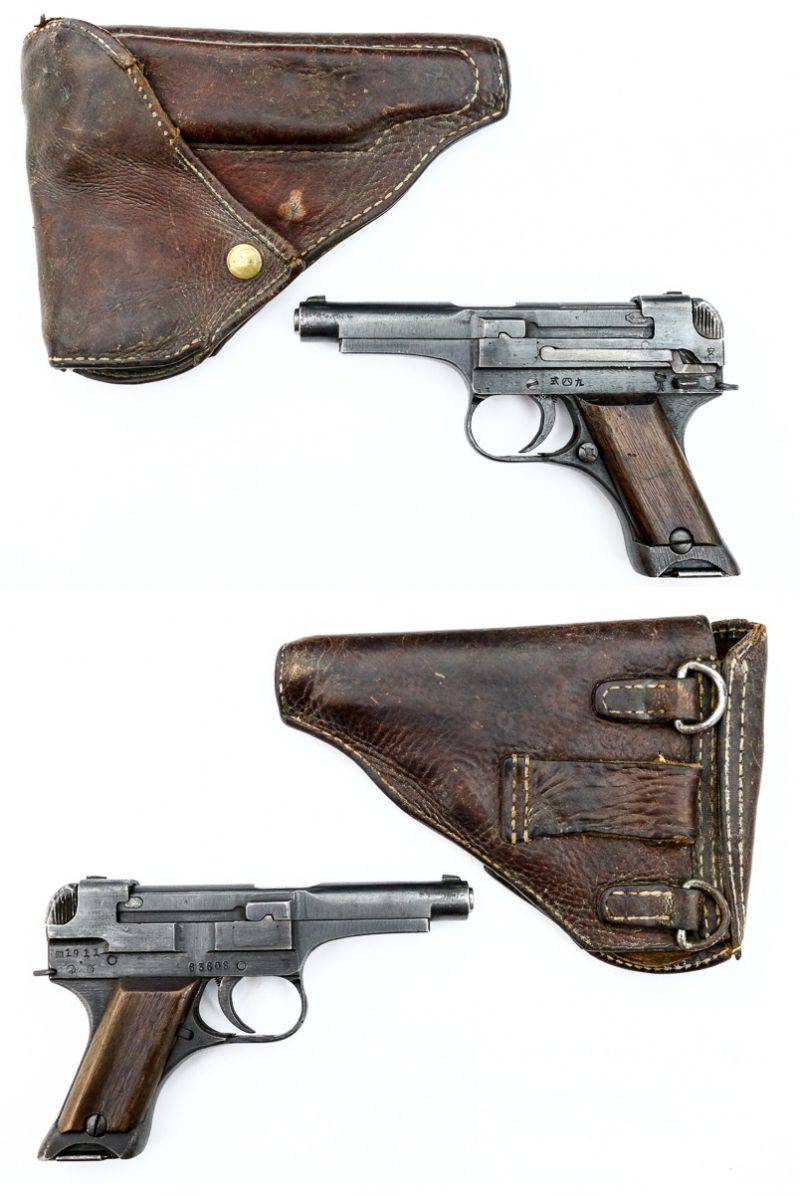 Yet the Nambu Type 94 pistol was a Japanese success. Army officers appreciated his compactness and the availability of ammunition. From 1935 to 1945, approximately 71200 Nambu 94 copies were released. Most of the mass production accounts for 1942, 1943 and 1944 year (respectively 10500, 12500 and 20000 units). The Nambu 94 became one of the few Japanese pistols that were sold abroad. The Thai army and China, having bought a small amount of these weapons, have successfully used it for several decades.

The average price for antique auctions for a Nambu 94 pistol is 500-800 dollars.