January 12 2016
60
The well-known "scapegoat" will soon become a "rabbit" on Bandera Krajina - this nickname has long been attached to Prime Minister Arseniy Yatsenyuk. "I see no reason for resignation, but I am ready to leave," Yatsenyuk said recently. He already agrees to become a “rabbit of absolution”, because the reasons for resignation are full of the mouths of all the deputies of the Ukrainian parliament. 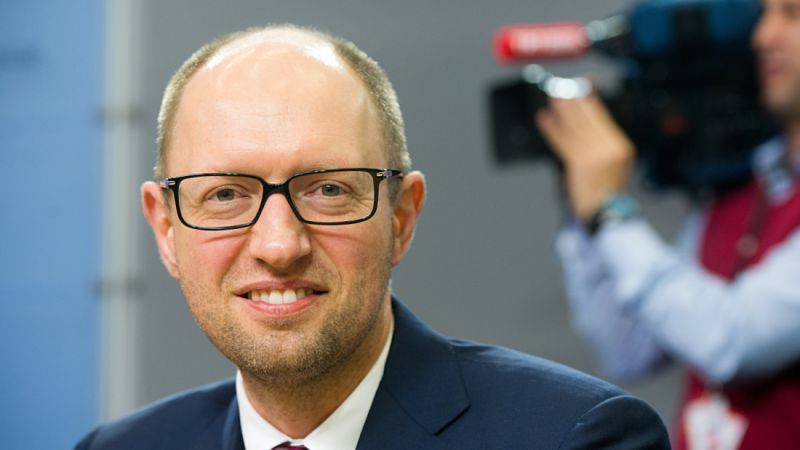 The resignation of Yatsenyuk may have various unforeseen consequences, but we will focus on the most fantastic - optimistic. This is impossible in the current Bandera realities, but you can dream up something?

... After Yatseniuk’s widely publicized resignation and putting on him all the sins of the junta, starting from 22 in February 2014, all zrad, such as: Odessa Khatyn, ATO, Euro-Association and default, he is declared the official “scapegoat rabbit”. Even more - Arseny will announce the main zrada Krajina. Introduced into all sorts of misconceptions of the president-commander-in-chief chocolate oligarch Petro Poroshenko.

Since it is difficult for one person, even the prime minister, to be exposed, other members of the “rabbit gang” will be exposed, the roles of which his friends will lead, headed by Avakov and Turchinov, Parubiy and Pashinsky. A smart trial of the "gang of the rabbit" will fill the screens of all Krajina TVs for a long time, and all svidomye imbue: "It is they, you bastards, are to blame for everything!"

President Poroshenko will make a somersault a la Yanukovych, and from Monday to Tuesday will change the political course to the exact opposite, and, like Yanukovych, will bow to Moscow to Putin, having previously expelled US Ambassador Jeffrey Payette from Kiev. As a foreign helper "rabbit". And agree with Putin "about the main thing". Do not forget, this is unscientific fantasy!

Malicious "rabbit" Rada will be dissolved Poroshenko presidential decree, and introduced direct chocolate rule, before the election of the new Rada.

The Provisional Government of Krajina will form the Opposition bloc, together with numerous defectors from other factions, who will angrily expose the crimes of the “rabbit gang”. The new Ombudsman will also make his first visit to Moscow, where he will hold a warm friendly meeting with former Prime Minister Azarov, and will swear vigorously to all the points of the Minsk agreements before Vladimir Putin himself.

The head of the DPR, Alexander Zakharchenko, will be appointed concurrently, and under his leadership, preparations will begin for the election of the new Verkhovna Rada, accompanied by measures to rehabilitate the former participants of the ATO and the Nazi Bandera of all "volunteer battalions." He will be assisted in this by advisers from Moscow, who will be taken up by the warm seats of Washington advisers in Kiev.

Svidomye Nazi, led by Dmitro Yarosh, will be counted among the "gang of rabbit", and exposed to the "folk lustration" invented by them. Strictly according to the law, despite the cries of the paid free western press about the persecution of dissidents. In our press, as a response to all these "Chamberlains", selected places will be read out from the works of Bandera, Shukhevych and other ideologists of "svidomosti", where they glorify the Hitler regime.

The Euro-Association of Ukraine will be equated with national treason, Brussels will be billed to compensate for the damage caused to Ukraine from all malicious European standards, and especially gay parades that dealt a terrible blow to popular morality. And if Europe will be stubborn, it, by the old memory, will threaten to turn off the gas, or to raise tariffs for its transit.

On the economy of Ukraine wounded by Europe will be imposed bandages of the Customs Union.

Stopped plants will work, the problems of energy and heating in the winter will be a terrible dream, the majority of the population will have confidence in the future.

The newly elected Verkhovna Rada will establish the Federal Republic of Little Russia (Ukraine), consisting of the people's republics, from East to West, from North to South. FRM (U) will conclude the Second Eternal Treaty with Russia after the Pereyaslav Treaty of Bohdan Khmelnitsky, enter into the SCO and the CSTO. Finally, Russia will forgive the $ 3 billion debt to Kiev, and Kiev will recognize the results of the Crimean referendum on 2014.

Evil tongues in Washington and Brussels call it a coup from above, the intervention of the hand of Moscow and Vladimir Putin personally. So what? Sergei Lavrov easily fends off these absurd accusations: Russia's policy is always based solely on the principles of reciprocity. Washington can, and we can not? This game we do not need. Then it is all the more possible for us, especially considering the exposure of the crimes of the "gang of rabbit", which in addition turned out to be also an American rabbit!

... Here is such a fantastic scenario that must be carried out in order to return life in Ukraine to the bosom of reality. But since fiction is impossible in real life, only a scapegoat will take place, it is quite real, and then everything will go along the Bandera curve, which is not clear where it will lead.

Next, in the colonial future, Poroshenko’s regime is leading the country today. Or in the past of the Wild field? Or where? One thing is clear: Ukraine taught Russia a “terrible lesson”, quite according to Gogol, which cannot be done by any means!

... Why all this fiction? To say that there is a successful exit for Ukraine from Bandera's Zrada, but it is fantastic. There is no real way out, upheavals are inevitable already in 2016 ...

Ctrl Enter
Noticed oshЫbku Highlight text and press. Ctrl + Enter
We are
Ukraine changed the government. What to expect from the Groysman cabinet and what does Saakashvili have to do with it?Prime passion. Who will replace Yatsenyuk as prime minister of Ukraine?
Military Reviewin Yandex News
Military Reviewin Google News
60 comments
Information
Dear reader, to leave comments on the publication, you must to register.