About the benefits of reading manuals or "Toilet anxiety"

January 16 2016
28
In the fall of 1944, Karl Adolf Schlitt received orders to take under his command the U-1206 submarine, form a crew and transfer to Norway, to Bergen, where the 11th flotilla. In the spring of 1945, the training process ended, and U-1206 with her captain gathered for a war in the North Sea. A happy lieutenant commander led the ship to the shores of Scotland, dreaming of how a medieval knight to lay down the heads of his enemies at the feet of the lady of the heart. 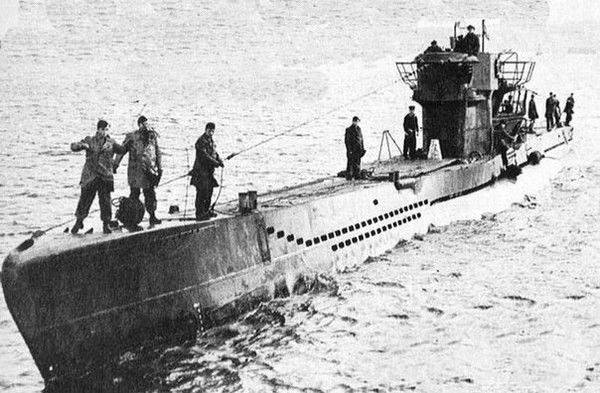 13 April U-1206 took a position on the approaches to the port of Peterhead in Scotland, meeting a convoy, which by all accounts was supposed to appear soon. By evening, the diesel suddenly went berserk, the commander had to go to the 60 meter depth and give the repair team the opportunity to quietly do their job. Unused in the submariners could have a little rest.

Here it is necessary to recall such a vital moment on the submarine as the “latrine”. The previous design allowed the use of a latrine at depths no greater than periscope, that is, at the surface. But the improved model on the U-1206 allowed to do everything that is needed at all depths available to the submarine ship. True, the mechanism did not differ in simplicity. Under the toilet was placed a large collection, which was flushed all the excess by rotating the wheel. The collection was under slight pressure, so that the "aromatic" gases would not break through when using the inside of the boat, where it was difficult to breathe. After the collection was overfilled, compressed air was pumped in there, pumping all its contents overboard at any depth, through a special pipeline closed with a special valve. Among other things, this system did not allow the ascent of waste to the surface, and earlier such cases had happened, which violated the secrecy of the submarine’s position. True, the sample was notable for its increased complexity of functioning, and one of the boat mechanics even completed special “toilet courses”.

Taking advantage of the free minute, Karl Adolf Schlitt decided to visit a small booth in order to personally test the progress made. For a long time in a secluded corner, the lieutenant commander probably thought that he had not yet glorified U-1206 with combat exploits. When the process was successfully completed, Karl Adolf, without looking, spun the wheel, but the expected murmur of the water was not heard. The commander is not lost in any situation: so Schlitt - looked at the official German instructions for using the latrine, hanging on the door and bravely turned another wheel - the latrine kept the stone calm and did not make a single sound.

In the end, after realizing that his underwater experience in this matter was not too great, Schlitt summoned a certified toilet specialist. He was busy repairing diesel, and to the captain sent a sailor-minder. He, eager to help his own commander and show himself from the best side, without reading any instructions, began to turn the steering wheel for pumping the collection overboard. In the excitement, both did not notice that the toilet bowl valve was not shut. The effect exceeded all expectations. The liquid and solid contents of the collection, pushed by compressed air and sea water, flew upwards with a whistle and a yellow “fragrant” fountain fell on both stunned submariners, to top it all from the toilet began to beat a column of fresh water under pressure several atmospheres thick as a human foot.

Hearing the sound of water rushing inside the ship, the mechanical engineer rushed to the latrine, but the water column beat with such force that it was impossible to approach the mechanisms of closing the valves.

The first watch officer, being in the central post, felt that the boat was heavily heavy, did not wait for the commander, who had been thinking about the eternal for too long in the latrine, and commanded the ascent to the periscope depth. The pressure in the pipe has fallen, the recovered motor mechanic jumped to the controls and closed all the valves. Everything seemed to be behind, but the situation turned out to be much more serious - the water that fell inside the robust case managed to reach the compartment where the battery was located. Salt water hit the battery plates and an inevitable reaction occurred. After a few minutes, heavy, caustic white gas swam across the boat - chlorine was arriving very intensively. At that moment the inside of the boat was very much like an underwater gas chamber.

Oriented, finally, Schlitt ordered to emerge altogether. The boat flew out of the cork to the surface, and the commander, whose state in those moments is difficult to imagine, reached the log-hatch and opened it with difficulty, greedily breathing in the salty breeze. Fans briskly began to push gas overboard, letting in the life-giving sea air.

It was at this moment that two British planes flew nearby from the guard of the convoy, which was waiting for the Schlitt submarine. The pilots were probably very surprised to see a boat coming up, from which white smoke was being poured, and immediately went on the attack. While ill-thinking sailors fled to the deck gun, the British bombs were already falling down. A direct hit was avoided, but very close blasts caused the boat such damage that it could no longer go under water. The very first collision with the enemy turned out to be the last for the ship, Schlitt was forced to submit the last command “Leave the ship”. Soon the approaching destroyer lifted the Germans out of the water ... As a result of the heroic march to the toilet of Lieutenant Commander Schlitt, the submarine died. AT history She entered under the nickname - "Flush the toilet."

Ctrl Enter
Noticed oshЫbku Highlight text and press. Ctrl + Enter
We are
Karl Bold: two victories among many defeatsDiplomats of the People's Commissariat of Defense: on the eve and during the war
Military Reviewin Yandex News
Military Reviewin Google News
28 comments
Information
Dear reader, to leave comments on the publication, you must to register.