January 14 2016
13
Many modern "Cossack" styles of hand-to-hand combat (in the modern, amateur understanding of the Republic of Belarus) force one to wonder - was there such a thing at all? After all, the Cossacks were warriors, and, not burdened with laws, could use any weapon in battle - a dagger, a sword, a pike, a dart, a bow (and later a firearm). This is a modern, restricted person on all sides must follow the laws relating to self-defense, and therefore, he studies, as a rule, the battle with his bare hands.


To separate the wheat from the chaff, we turned to an expert - Andrey Viktorovich Yarovoy: President of the Don Federation of Cossack Martial Arts Shermiy, Ph.D., historian, associate professor.

The answers were unexpected. 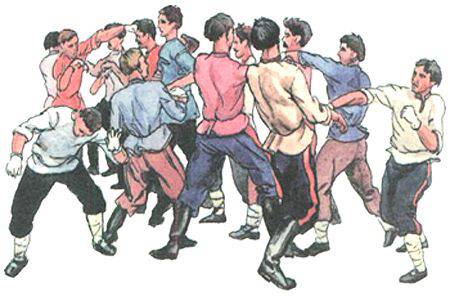 1. Did the Don Cossacks have a close fight in the modern sense of the word?
- A special discipline, such as hand-to-hand fighting today, did not exist either in the tradition of the Don Cossacks or in military training. Since it was not necessary.

2. Was the combat technique itself barehanded? Not a fist fight, namely hand-to-hand (for example, strikes in the Adam's apple).
- This is a fist fight. A mixture of fist and fight is a fight.
A blow to the Adam's apple is a blow under the bottle, in the tradition that is known to me. The blow was used as a favorite, was used both in cams - for an amateur, on a circle (one-on-one duel, before the start of the battle), and in a normal fight.

Tradition does not know such a thing as hand-to-hand combat in itself, there are fist-fighting skills (very widely understood - they are beaten with fists and palm, and with different parts with fists), there is a fighting skill - both are used in traditional competitions and holidays. It is just that proportionality of skill use is important. "You beat yourself - God remember, they beat you - be silent." A fight is like a fight in oblivion, that is, in uncontrollability and anger, there is something to fight for and share. Therefore, a fight from a fist was distinguished by the presence of a pitchfork, brush or stick in hand. As for the blows, which seem to be prohibited today, their use was dictated by the practice of the absence of weight categories. As a way to defeat the enemy stronger than you.

3. That is, in contrast to the tradition of fistfighting, the middle band of the Donians in fistfights allowed a blow to the Adam's apple. Was it the ubiquitous rule? Or some local tradition?
- In the village of Verkhne-Kundryuchenskaya they beat only with their fists, in the villages where Russian peasants lived - a stick in his hand - a sign of a fight ... But in the village of Mechetinskaya and the sticks they used to throw stones instead of snowballs, I know that in some of the Kuban villages there was a similar phenomenon.

4. Can you divide the military aspect of the Don Cossack tradition into parts? For example: fighting, cams, melee. And tell that where and when applied.
- This, apparently, will look somewhat artificial - to divide the combat aspect. But, following the well-known schemes, we can single out the following: a fight begins with a fight of fire, that is, shooting from guns, then throwing darts, then a distance of checkers, you can use a whip in close combat, and we go to the distance of hand-to-hand combat - kicks ( for failure of breathing, under the ribs, on the legs, in the groin, in the stomach), the distance of the fists (palms), elbowing (take on the elbow), hold your hands on the belt, legs with the aim of tilting the opponent, stalling him or throwing over his head. Throws outside tradition are traumatic - head to the ground. Lying enemy could kill legs (mortal combat). That's the whole military tradition. As you can see, includes the traditional possession of weapons, fisticuffs, the struggle to break.

5. How were kicks struck? What part of the leg? What is the trajectory?
- Often with a sweep like on a soccer ball, with a toe under the ribs, in the lower abdomen, lifting a foot on the knee, a foot knocked out a foot (hook), a foot on the lower leg, foot in the stomach. Trajectory - ascending, trapping ...

6. What does “out-of-tradition throws traumatic” mean?
- Throws out of tradition - uncontrollable - the enemy simply rushes through himself and the head and legs flies somewhere behind his back ... In tradition, I suppose, you can hold the belt (without special harm).

7. That is, fought by the rules? With their?
- The rules were stipulated literally before the fight. With the Kalmyks, for example, they fought by special persuasion ... there could have been their own rules in the village. To fight: you can not bite, scratch, fight. For the cams: two fight, the third does not go; not lying down; on whom blood, do not beat.

8. Usually what were the rules?
- So the cams are a tough game. The task is to knock the enemy out of the line or on the opposite shore, in the course of the battle, they did not beat the recumbent (it is clear that he wouldn’t get up), on whom they did not beat the blood until it was gone ... they didn’t let the strongmen into battle so that they would not be killed. If they fought with aliens - with Kalmyks, Tatars, artisans, etc., then they fought fiercely, the main goal of the game is to win.

It’s just that sometimes before the battle they would fight the Zarehil or the Atamans (the leaders of the walls); young people could jump out of the wall with a swoop - struck and hid in the wall, causing the fight to clap in the palm of their hands, and in general, many and often clapped and whistled. There was also a prize - a barrel of vodka.

9. Let's talk about the fight.
- Wrestling fights on the Don are found in various forms: on the belts, in the girth, on the free. Under the fight usually understand this type of melee competitions, in which "opponents only try to overcome each other, knock down the ground without a weapon and without beatings and fights." As the old men recalled, children fought always and quite often. Adults fought on holidays, on the “Sabantui” at the end of the harvesting season. Older guys came to the places where children's groups gathered: they explained the rules, "pitted" in a duel, and fought themselves. Thus, the transfer of experience, familiarity with the tradition, and then the skill developed in the practice of fighting and watching other fights.

10. By the way, what is the struggle "on breaking"?
“The lap fighting on the Don was called a break-up, in the strap they take it by the belt and throw it through themselves. In winter, go to the Don and fight on the strap. They take each other’s belt and the currencies of who wins. ”
Belt wrestling took place on holidays. Fought in a circle. The fight was fought until the fall of one of the opponents to the ground. The one who touched the ground after the throw was considered to be the loser, even if the thrower had fallen after him. It was impossible to break and change the seizure, stipulated the use of footrests. Closest strap and fight in the bout, when instead of a belt wrestlers cover each other with their hands. “They fought, undressed in the steppes, put things softer, there were judges from the older guys, they made sure that they did not go up”. It was impossible to bite, fight, step on, break the grip.

The description of this struggle among the Don Cossacks is presented by the Polish traveler, historian and writer Jan Pototsky, who in 1797 passed through the land of the Don Cossacks to Astrakhan. He watched as his companions, the Don, fought. “... The art consists in grabbing the enemy by the belt, then throwing backwards with all his strength, so that the wrestler will fly over his head; you will think that he will break his arms and legs, but the Cossack is not so tender: during both of them they both stood up healthy and unharmed, as if they had just fallen. This game is all the more remarkable because the Cossacks attribute their origin to it. When Vladimir conquered Kherson, his son Mstislav moved to Vospor and came to the island on which Taman stands, which was then the main city of the principality of Tmutarakansky. The prince of jars or kosogov defended him; they decided to end the war by duel without weapons. Mstislav was the winner ... ".

An interesting description of the struggle is in Sholokhov in the raised virgin soil.

11. By the way, can the Silent Don be considered as a reliable source for the Doncha cam fights? Comment on the well-known excerpt from the conversation of Stepan Astakhov with Grigory Melekhov:

I’m sorry for one thing, the guy ... dyuzhe miserable ... Remember, the year before last we fought in the walls in Shrovetide?
- It is when?
- Yes, in the entot time, as the poste was killed. Singles with married fought, remember? Do you remember how I drove after you? You were a liquid, Kuga green against me. I felt sorry for you, but if I had struck on the run, I would have crossed in two! You run very fast, all loaded: if you were to strike with a drag on your side - you wouldn't live in the world!
- Do not worry, iskho somehow cling.
(Mikhail Sholokhov. Quiet Don, Part 1, Part 25, XIX, Young Guard, 1980)

- It was he who threatened to hit him with a stick. With a touch.
Using the works of Sholokhov as a source for the traditional culture of the Don Cossacks is acceptable. Some things require a reservation, like any artistic source. The most interesting cam described in the works of Kryukov, for example, "Zyb", and in others, there are descriptions in Skripov, Petrov (Biryuk).


12. It turns out you could use a stick in a fist fight?
- Yes, in Veshki, as in Mechetka they fought, a sort of fist-fist fight.


13. What were the rules?
- Here the main goal to achieve. The rules are ordinary: those who sit on their knees are not beaten; who has a broken nose and blood flows, he, wiped, gets up to fight again. A sort of mix of fencing and fist games.
In general, the attitude towards the fists was akin to the attitude to the game, although they were beaten in the face, planted in the sides, in the chest, under the ribs, but after the battle they sat down together, discussed the duel, drank. The most often fighting place was the river, as in the village of Mechetskaya, in the village of Kundryuchenskaya, such a place was the Gypsy meadow - an unclean place, about which all sorts of rumors circulated, where they saw werewolves, dead people. In the farm Visilny of the Semikarakorsky district, the cams passed on a high kurgan, recalling the most ancient Slavic tremens. Usually, the crowd fought on the crowd, or in two lavas. Wall fights ended differently. In one case, it was enough to push the enemy out of the line of the field, in the other case the battle lost its structure, at dusk it turned into a meshing dump and ended with the onset of darkness.