January 11 2016
47
The Western “democratic fraternity” is turning into a unique association that introduces or is about to impose sanctions even against what is not. Rave? Perhaps ... But not for those states which, while trading in their national interests, are ready to appease the "main" partner with all their strength and capabilities. One of the latest attempts to please is the appeal of the leadership of the Republic of Lithuania to its neighbors with a call to abandon the acquisition of "dirty" energy from the Baltic and Belarusian nuclear power plants.


The piquancy of the situation lies in the fact that neither the Belarusian nor the Baltic NPP produce electricity for the simple reason that there are no stations themselves. According to the original plan, the construction of the first power unit of BaltNPP in the Nemansky district of the Kaliningrad region should be completed in 2017, and the first power unit of the Belarusian (Ostrovets) nuclear power plant should produce the first energy a year later.

Lithuanian authorities stated that Estonia and Latvia should have considered issues of refusing to buy electricity from the BNPP and BaltAES for the future, since the energy of Russia and Belarus will be extremely “dirty”, and this “does not meet the rules and regulations of the European Union.” In addition, official Vilnius states that Russia and Belarus are going to take advantage of "unfair competition conditions" and "seize part of the energy market in Eastern Europe."

What kind of “unfair competition” are we talking about? Speaking about the fact that a number of EU countries, including the “three sisters” from the Baltic States, some time ago expressed their readiness to abandon the operation of nuclear power plants, adding that these generating facilities are harmful to the environment and do not comply with “green” European principles. . Well, if they do not comply, we can build nuclear power plants on our territory and sell the missing megawatts of electricity to Eastern Europe, they decided in the Union State of Russia and Belarus.

In Lithuania, it was realized that after stopping the Ignalina NPP, which supplied the Baltics with electricity, put into operation by the Soviet “occupiers” in 1983, sooner and later it would be necessary to buy electricity from its eastern neighbors. At the same time, they clearly recalled in Vilnius that the European partners "strongly asked" to stop the work of the Ignalina nuclear power plant — they allocated about € 380 million euros for closing. More than two thousand Lithuanian citizens eventually lost their jobs, and the power grid lost 1500 MW of electricity. 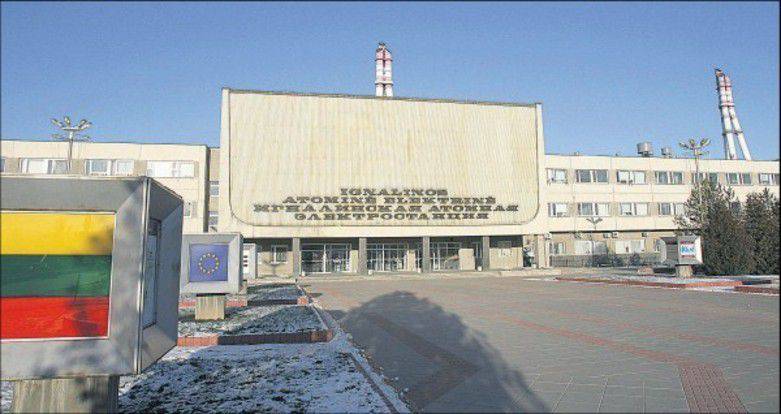 In order not to be the only ones, I'm sorry, suckers, the Lithuanians now want to enlist the support of Estonia and Latvia. They say, since we have conserved the power plant at the behest of Brussels, then let's at least say together that we will not buy electricity from Russians and Belarusians - like “we will impose sanctions” ...

Lithuanian Energy Minister Rokas Masiulis went to meet with the Estonian ministers and after the meeting announced the achievement of consensus on this issue. Masiulisa quotes BNS:
In this case, our opinions are completely the same. (Estonian Minister) Michal agrees that solutions must be found on how to limit the entry of “dirty” atomic energy into the member states of the European Union (EU). We agreed that our specialists should start work right now and look for options.

In a couple of weeks, a meeting of the so-called Baltic Council of Ministers will be held, where they will convince official Riga to announce in advance about the refusal to purchase energy from future nuclear power units in Belarus and the Kaliningrad region.

Masiulis:
We will ask that this issue be put on the agenda in Latvia - the specialists and officials of the three countries will begin to consider the issue.

The initial plans were dated 2009, then the accident at Fukushima happened, and Japanese investors became, to put it mildly, tense ... Then all those companies that, as they say, started for health, refused to invest in the project ... Apparently, at least to save face, the Lithuanian authorities decided to hold a referendum on the expediency or inexpediency of building a nuclear power plant.

A referendum on all the laws of the new Lithuanian democracy showed the result that Brussels wanted: 65% of citizens opposed the construction. The face was saved ... But with a saved face, you also need somewhere to take energy ... As a way out - to buy either from Russia or from Belarus. But this is the real Baltic "Zrada", and therefore Dahl is tearing ... nerves to convince partners that we should forget about the results of the 2012 referendum of the year (or announce a new referendum with new results) and start building the Visyaginskaya NPP with attracting foreign capital . Moreover, the United States is, as it were, FOR, as the Lithuanian nuclear power plant (if it is built) will use technologies and equipment of American companies - in particular, Westinghouse.

At the moment, the construction of the Baltic NPP is suspended until it is ascertained how the situation will develop with the nuclear energy market in the same Baltic region. At this moment, Lithuania is trying to compensate for the shortage of electricity, including with the help of the 450-kilometer connection of power lines with Sweden, which supplied voltage to the converter in Klaipeda. The system is still in test mode. For Sweden, the “emotional throwing” of the Baltics is a gift of fate, because if the Visaginas NPP remains in the plans, plus there will be no electricity purchases from the territory of Belarus and the Kaliningrad region, the Swedish energy export will grow by about 70%! The purchase of electricity from Sweden will cost the Balts approximately 40% more expensive than purchases from its eastern neighbors. But do the additional expenses from the budget of someone in the Baltic political panopticon worry us when it comes to another attempt to bite Russia or at least yelp eastwards ...