January 11 2016
20
7 January militants attacked a tourist bus in Cairo. True, instead of explosives, they used pyrotechnic means. No injuries. However, the next day, people allegedly arriving by sea attacked the hotel in Hurghada. As a result of the attack, several vacationers from different countries suffered (there are no Russians among them). One attacker was shot by the police (he was a 21-year-old student from Cairo, Mohammed Hassan Mahfua), another was wounded and arrested. The head of the Ministry of Tourism of Egypt, Hisham Zaazu, said that the state intends to take additional measures to ensure the safety of tourists. In his opinion, the militants have set a goal to harm the tourism industry of Egypt. 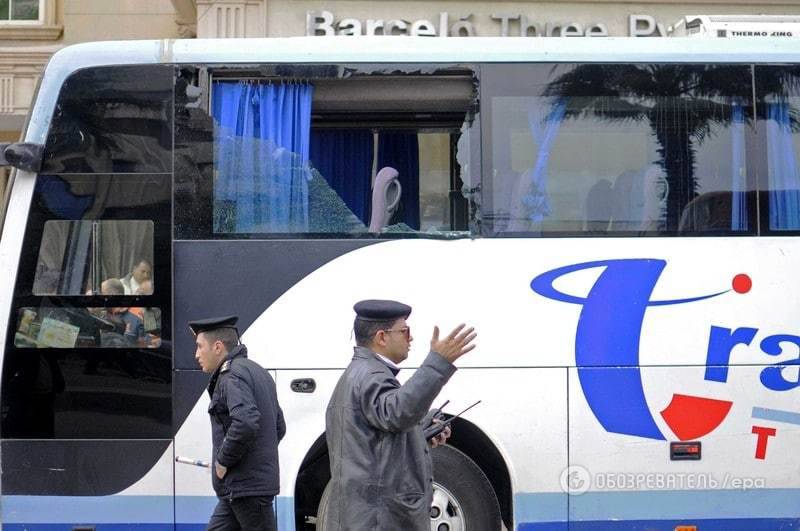 Egyptian Tourism Minister Hisham Zaazu said that in the coming days, the government will announce additional measures to ensure the safety of tourists staying in Egypt.

According to the head of the ministry, “local instigators” who attacked foreign tourists in Hurghada set the goal of harming the country's tourism industry, since this industry occupies a significant place in the economy of Egypt.

Recall the country's Interior Ministry stated that the security forces defused an explosive device at the site of the attack in Hurghada and prevented the attack of terrorists.

According to the situation and crisis center of the Russian Foreign Ministry in "Twitter", as a result of an attack on a hotel in Hurghada, three foreign tourists were injured, “there are no Russian citizens among the victims”.

As transmitted RIA News", the Egyptian authorities said they intend to assume the costs of treating the victims of the attack on the hotel in Hurghada. This was announced by the Ministry of Tourism.

Events continued to develop in a gloomy vein. Terrorist attacks resumed on January 9.

On this day, armed militants killed a policeman and a soldier in Giza (an outlying district of Cairo). Responsibility for the attack took the "Islamic State".

In Hurghada introduced a state of emergency.

The latest attacks in Egypt are links of a single chain, says Vladimir Sotnikov, an Arabist scientist and senior researcher at the Center for International Security, IMEMO RAN.

“As for the recent incident in Cairo, the Islamic State has already assumed responsibility for itself. In Hurghada - this is also one of the terrorist groups, if not the “IG” itself, then local organizations are somehow connected with the “Islamic State”, the roots must be found there, ”he told the newspaper "Sight".

According to the expert, the crash of the A321 aircraft over the Sinai Peninsula at the end of October 2015 was associated with the same forces.

“The goals of the terrorists? They have repeatedly been declared "Islamic State" and the groups associated with it, - said the Arabist. - This is the establishment of the so-called world caliphate. Such is their global goal. To us, Europeans, it may seem utopian, but for them it is serious, they conduct relevant activities and do not share their enemies, including on a national basis. They are waging war against Israelis, Europeans, other Muslims, against the whole world. "

However, there are other goals, local: the destruction of the economies of the region. With an increase in the number of terrorist attacks in Egypt, the number of foreign tourists will decrease. The blows of terrorists hit the economy and security of Egypt. By attacking terrorists, they want to attract as many supporters as possible: the poorer the Egyptians, the easier it is to recruit them into the IG.

Islamist past also has to intensify in Egypt. “As for Egypt, among the local Muslim Brotherhood, who had recently been in power in this country, there are supporters of the Islamic State, this is known,” Sotnikov reminded.

What are the Egyptian authorities doing now?

In addition to the introduction of a state of emergency, patrols were intensified in Hurghada and in other resort cities of Egypt, primarily hotels. Security level upgraded to “G”, reports “Vzglyad”. Police are checking hotels.

As for Russia, then 6 of November 2015 of the year President Putin agreed with the recommendations of the FSB director Alexander Bortnikov regarding the suspension of air links with Egypt.

The reaction of the Ministry of Foreign Affairs of the Russian Federation to terrorist acts in Egypt is also known. In the comments of the Information and Press Department of the Russian Foreign Ministry in connection with the attack on foreign tourists in Hurghada noted:

“On January 8 in the Egyptian resort of Hurghada, two people armed with knives attacked foreign tourists at the Bella Vista Hotel. As a result, according to information received, two citizens of Austria and one of Sweden were injured. All victims were hospitalized. One attacker, according to the Egyptian Interior Ministry, was destroyed during a police operation, the second - detained.

As is known, there are no organized Russian tourists in Egypt now.

In Moscow, they condemn the criminal action in a hotel in Hurghada. We firmly support the actions of the Egyptian government and the security forces of the country to resolutely resist the extremists of all stripes. ”

The goals of the new terrorist attacks, we add, are obvious: through attacks on the tourism industry in Egypt, replenish the ranks of the IG with new “warriors of Allah” who are dissatisfied with the economic downturn and rising poverty. The collapse in the tourism sector and the further impoverishment of the Egyptians, who cannot be called rich today, will undoubtedly lead to an increase in the number of those who will join the ranks of Islamist militants in search of a way out of the situation.

In addition, we must understand that radical Islamism in Egypt has not gone away with the departure from the political arena of M. Mursi and the Muslim Brotherhood. Many of these "brothers" share the ideology of the "Islamic state".

Obviously, in the future, economically weak Egypt will become even weaker, and there will be more supporters of the “caliphate” in the country.

As for tourists, especially western ones, this country will represent a source of terrorist danger for them. And if the Russians understood this last fall, then the Europeans are becoming aware of the threat just now.

Observed and commented on Oleg Chuvakin
- especially for topwar.ru
Ctrl Enter
Noticed oshЫbku Highlight text and press. Ctrl + Enter
We are
Results of the week. "Go on a horse, a century of will not be seen!"Ban flights to Egypt. What happened to the plane and what awaits the Russian tourist business?
20 comments
Information
Dear reader, to leave comments on the publication, you must to register.