"Poroshenko is already completely different": the split of Ukraine is becoming stronger 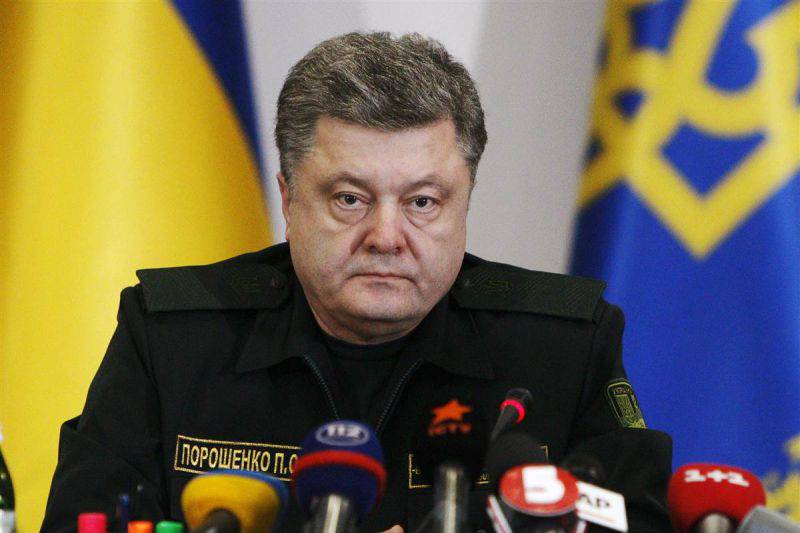 It is not known for certain who made Petro Poroshenko this time the best New Year's gift: whether he himself, singling out another fat government purchase for factories belonging to himself, or someone from grateful gods who are in high positions in Kiev. But the worst gift came from there, from where it certainly was not expected - from the USA.

One of the most respected sociological organizations in the Western world - Gallup - published the shocking data of the opinion poll conducted in Ukraine. The verdict of Petro Poroshenko’s researchers is unequivocal - his popularity has fallen far below even the popularity of Viktor Yanukovych in the pre-Mayan time. In terms of public disapproval, Poroshenko became the second in modern stories President of Ukraine-after his godfather Yushchenko. Poroshenko outgrowed today only at Yatsenyuk, whose government, according to the materials of the American study, still reached a record threshold in terms of falling support levels.

I will note right away that American sociologists not only did not conduct a survey in the Crimea, but did not even begin to plot it on the map of Ukraine. Donbass they put on the map of Ukraine, but the survey was not conducted there. In general, the results of interviewing represent exclusively the opinion of residents of the territories controlled by official Kiev, which makes them even more curious.

In general, the rating of Petro Poroshenko as president of Ukraine was 17%. In all regions without exception, the level of support for the President-oligarch was significantly lower than the level of disapproval, but there was still some regional specificity.

In the West and in the Center of Ukraine, Poroshenko’s support was “above average”, making up 22%. In the North, it reached smaller values ​​- only 21%. But in the South and East (without Donbass) Poroshenko supported all 7 and 11% of respondents, respectively.

Sociologists say that Viktor Yanukovych, even before the Maidan as a whole in Ukraine, had much higher support than Poroshenko’s today - 28%! In the entire history of modern Ukraine, Poroshenko’s anti-record could only beat Yushchenko, whose level of support in 2009 fell to 7% before the presidential elections.

Also, researchers pay attention to the fact that in the most "pro-Western" Kiev Poroshenko's rating today is almost the same as in the 2013 year was Yanukovych - 21% vs. 20% ...

The level of support for the government of Arseniy Yatsenyuk today is only 8%. The indicator in the history of Ukraine never fell below this bar. He was the same before only once - against the backdrop of the parliamentary crisis under Yushchenko in 2007. Just a year ago, the approval level of the Kiev Cabinet was exactly three times higher.

88% of respondents said that corruption is widespread in the country. And the number of those who believe that the authorities are really fighting it turned out to be less than in the 2013 year before the start of Euromaidan (5 and 6 percent, respectively). 65% of the residents of the territories controlled by Kiev believes that Ukraine is moving completely in the wrong direction.

What conclusions can be drawn from the results of research by American sociologists?

We can state that the “integral” (presidential-parliamentary) indicator of support for the current government in Ukraine has collapsed to record-breaking historical lows. Does it follow from the fact that Yanukovych before Maidan was much more popular than Poroshenko, and the government of Azarov had a significantly higher level of approval than the Yatsenyuk Cabinet, that in Ukraine it is possible to repeat the scenario of the end of 2013 - the beginning of 2014 of the year? Unfortunately, this is very unlikely.

Firstly, Poroshenko managed to build an ineffective in matters of law enforcement, but extremely effective in protecting his own power punitive apparatus. Poroshenko and Yatsenyuk made the necessary conclusions from Yanukovych’s mistakes and set wages in 3-4 for “their” security forces higher than the national average. Against the background of the general monstrous poverty, the security forces, already past “anti-recruiting” in the 2014 year, began to serve those who committed the coup d'état and strive to do everything possible to protect the existing government and to maintain a relatively privileged status. In addition, they have already elementary "burned bridges." And in order to preserve the existing regime, the punitive system creates an atmosphere of general terror, with the result that some people die or "go missing", while others receive long prison sentences for posts in social networks or the spread of the opposition press.

Secondly, this factor is the key, the society in the territories controlled by Kiev is completely divided. If most of the population of the South-East in opposition to Poroshenko and Yatsenyuk are constructively pro-Russian, then those who do not support the current government in the West, the North and the Center of Ukraine are rapidly becoming radicalized, replenishing the ranks of neo-Nazi and extremely pro-Western radicals.

Accordingly, there are even fewer "points of contact" between the two parts of the "Ukrainian opposition" than each of them separately with the current "power". Therefore, the rapid decline in the rating of power is more evidence than the prospects for its change, but the prospects for the collapse of Ukraine, which in a certain sense is perhaps the most humane option in relation to its population.

Why is the rating of Kiev "president" and "government" collapsed so rapidly? This is, in principle, obvious. Ukraine's GDP in dollar terms compared to the 2013 level of the year to date already collapsed almost 2 timesthat is one of the world's anti-record. Incomes of the population, according to official Kiev statistics, only in the current year collapsed on 26%. Utility rates have recently increased in 3 - 4 times: the total rent in the heating season for 2-3-room apartment is up to 2000 hryvnia, with an average salary on hands after deducting taxes on the order of 2500 hryvnia in the province and 3000 on average in the country. And in the year 2016 Ukrainians waiting for a radical radical increase in prices, taxes and utility tariffs.

In addition to economic issues, the military-political factor also plays its role. The population of the South-East in its mass strongly opposes the war in the Donbas in principle, and the North-West craves for victorious war to a "victorious end". For obvious reasons, official Kiev cannot fully satisfy either of those or others ...

What predictions can be made on the basis of sociological research?

There are three main scenarios.

Option one. There is some consensus between official Kiev and external forces that will lead not to formal, but to real federalization of the country. Judging by the position of the vice-president of the USA, Biden of Ukraine’s curator, the American authorities also became supporters of this option, for which it gradually turns into the only possibility of preserving the “united Ukraine” and shifting part of the costs of its maintenance to the Russian Federation.

The second option. Relying on punitive measures and a punitive apparatus, Poroshenko for some time keeps the rapidly impoverished Ukraine under his control. Representatives of the older generation and socially unprotected layers are dying out massively from hunger and disease. Working citizens also massively scatter: who is to Russia, who is to Europe. The former Ukraine is turning either into a poorly impoverished agrarian territory, or is being used for its own purposes by transnational corporations, but already with “renewed” at the expense of African-Asian migrants and western population managers.

Option three. Ukraine finally collapses. In the South-East, a loyal Russia and aspiring states are created: either a federation of republics with broad powers, or a centralized entity under the auspices of Donbass, which led the initial liberation struggle.

The fate of the Northwest is more vague. There either there will be a single project loyal to the West, fueled by small amounts of loans, as an outpost against Russia and the South-East, or a patchwork of territories divided between neighbors according to historical traditions: Poland, Hungary, Romania.

Probability of fourth option - coming to power in Kiev of an adequate elite, able to unite the people and pursue a constructive course in the objective interests of the entire population, tends to zero. Too different these interests.