January 13 2016
13
In the second part of the material about the school of American knife fighting, we learn about the psychological manipulation of the enemy, the rules of knife sparring, mental preparation and preliminary testing of students, which is undoubtedly useful in teaching such a dangerous form as knife fighting. By the way, how often do we hear about preliminary interviews in sections of the National Library? As we learned in the first part, Scott Babb tries to train law enforcement officers, for whom the knife is weapon last chance in case of failure of regular firearms.


In general, the concept of the “Battle Questionnaire” cycle has been changed and now also includes various international areas of martial arts, hand-to-hand combat and self-defense, not necessarily present in Russia and the CIS countries. The purpose of the cycle is to familiarize the reader with the full range of combat directions of the world, both traditional and modern, which is often impossible due to the language barrier. Now this issue is resolved.

12. Work against weapons / with weapons
- We have a Street Boxing course and a second course on unarmed work called the Atra Manus, which includes elements of Jujutsu, Kinamutai (a special subdivision of some Filipino BIs with an emphasis on bites, stinging, squeezing eyes and other “dirty” combat vehicles - approx. M.Didenko), and streetfighting.

13. Work on the ground (in the stalls)
“Atra Manus includes some fighting practices on earth, but this is not what we specialize in.”

14. Work in non-standard conditions, from non-standard opponents (in water, in darkness, confined space, from a dog, etc.)
“We're doing 30-40 training percent in low light, since the attack is likely to occur after dark.” We also focus on fighting in tight spaces, and in the early stages of developing this course, we studied videos of knife attacks in prisons. 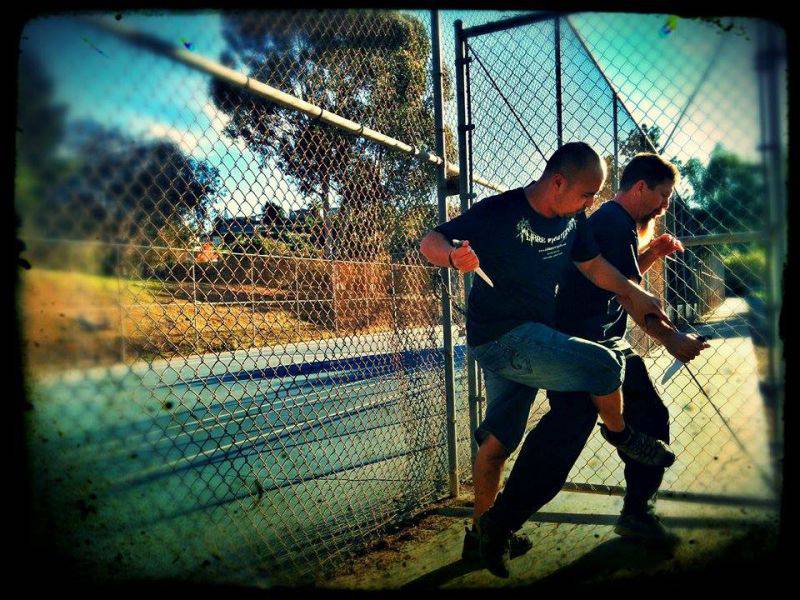 15. Psychological training
“Before I take a student to class, I check him to make sure that he is all right and in good spirits and mentality, and if I feel somewhere that he may be somehow unstable, I will remove him from classes. Knife fighting attracts many strange types, so it is important to be prudent. We do not do any energy work, or anything that affects metaphysics. Some of our people use anting-anting (in the culture of the peoples of the Malay Archipelago, a magical amulet or talisman that gives the owner wonderful opportunities (superpower, saving lives, protection from hazards, invisibility, etc.). Usually in the form of a neck pendant, but may be in other forms, for example, in the form of a magic inscription on clothes - approx. M.Didenko), and other spiritual elements, but it is a personal expression, not part of the system.

16. Other effects from occupations (improving, developing and etc.)
“If I did my job correctly, then the last thing my student might want is to take someone’s life.” We are making great efforts to show students the horrors of a real knife fight. Passing the training, a person understands how fragile the human body is and how easy it is to destroy it. This understanding teaches people to value the sacredness of life in a new way.

17. Unique features of the direction (style, school)
“At higher levels, we include an element called puppets.” This is a psychological manipulation of the enemy. This is the ability to get into the head of the enemy and make him react as you need.

18. Application in life (a case of self-defense, when the student was able to protect himself in this direction).
“We train a lot of military and law enforcement officers in Mexico, and because of the extreme level of violence south of the border, we get good feedback. In a sense, Mexico has become a testing ground for the Libre. At the last count, Libre was used in real combat more than thirty times, most recently earlier this month. Most of the incidents involved military and law enforcement officials in Mexico, but there were a few civilian cases. Some of the incidents did not last long and the level of violence was low. Others have been fatal. As a founder, I am sad that in my creation the counting of the dead is also open. Each of these incidents teaches us something and even better fuses the system. This may sound strange, but such cases strengthen the system.

19. What does Libre Fighting mean?
- "Libre" means "free." Initially, I called my classes the Free Military Academy, because I wanted to have a platform free from politics, associations, traditions and everything else that could slow down our progress as fighters. I did not come up with a name for the system we were creating, while I didn’t think of it as a system at all. When people asked for a name, I simply called it "my approach." Because of the name of the course, people began to call what we do Libre fighting, well, and I put up with it.

20. How do you spar? What are the rules?
- We use sparring knives that we make ourselves from foam tubes. They allow us to fight in contact and at full speed with a low risk of injury. We also wear glasses to protect our eyes. The rules depend on the duration of the round, which I regulate, the level of experience of the fighters and the skills on which I want them to focus in a particular training bout. The longer the round, the more restrictions, as the technique and control worsen with increasing fatigue, which contributes to the appearance of injuries. I want every student to face all other students in training, with one opponent at a time, in 20-tisecond rounds.

This causes them to constantly adapt to different opponents, and much faster than if they studied opponents within a few minutes. It makes them think fast and act on instincts.

21. How do you psychologically prepare people to use the knife in a real situation? After all, you need to cross the threshold. And how do you work with the fear of knives?
- With regard to the preparation of someone to use the knife, then one of the things that we are constantly trying to create is high-level stress, unprogrammed situations in which the student throws a knife on instinct. But the best way to feel the feeling of sticking a knife into someone we’ve found is to use a hanging pig carcass. You can feel how easily the blade passes through the flesh, to see what types of wounds forms a knife, to feel the smell coming out of the carcass.

22. Give an example of "puppets"
- A very simple example of "puppets" is a feint with a blade, then a low kick with the foot to the opponent's patella. This will force the opponent to think simultaneously about the knife and kicks. Then again a trick, and while the opponent is focused on the blade and kicks, give him a slap in the left hand. And now, while the enemy is thinking about indirect attacks that follow the feints, you start a simple, direct attack with a knife. It's just a matter of neutralizing the enemy, the ability to get into his head.