Ukrainian winter is unlikely to be quiet

January 11 2016
109
True Bandera are now preparing for the second stage of their national revolution, and all in anticipation ... The celebration of February 22 of the second anniversary of the "revolution of dignity" is a convenient excuse for its smooth transition into the second stage, coolly nationalist. With the fulfillment of all these promises and gilyak "occupation regime" Poroshenko. Nardep Sobolev from Lviv has already put forward the slogan: revolution, or throwing a grenade! Thus, he and like-minded people tried to break through to the Verkhovna Rada peacefully.


However, the “occupation regime” is nothing more than the presidential dictatorship of Poroshenko, and her teeth have already grown in the form of their own special services, and recently the president reassigned himself to the National Guard and the former internal troops. Plus, the APU is in reserve, in the ATO zone ... So the second stage of the revolution is expected by certain difficulties.

It is clear that in fact Poroshenko is the president of Zits, and all decisions on whether or not to conduct revolutions in the occupied territories are made in Washington, but Makhnovshchina in the Wild field, which was once Ukraine’s today, cannot be fully controlled Ataman does not have a treasury, and the lads are hungry and cold ... But it is to such a scenario that the course of events in the Bandera Krajina moves.

In this revolutionary situation, the recognized leader of the Bandera neo-Nazis, Dmitro Yarosh, actually betrays the revolution: arranges a split in its vanguard, the Right Sector, resigning as the leader and forming his own organization under the formidable name of the Volunteer Army. Which immediately renounces some "radical marginal", and thus extends the hand of the "occupation regime" Poroshenko.

It seems that Yarosh turned out to be an American hireling, and not a “Cossack” sent to the Americans, and simply fulfills valuable instructions from the US Embassy in Kiev, from Jeffrey Payette. Just some kind of political prostitution in the “revolution of dignity”, about the danger of which during the revolution Lenin warned, by the way. Or is it still a tricky Bandera trap for Poroshenko? This question torments many in Kiev today.

Inflexible fighters against the "occupation regime" at this time update the "Right Sector", and, apparently, will give him the name of Sashko Bilogo (Muzychko) to separate himself from the compromised "name Yarosh". By the way, the late Sashko has not yet been avenged, his killer is Foreign Minister Avakov still in power.

It is known that revolution is a delicate matter. Poroshenko, he is the “occupation regime”, can try to stop the second revolutionary impulse by the resumption of hostilities in the Donbas, coinciding with the celebration of the second anniversary of the February coup.

Today, the junta is hardly capable of a massive offensive in the Donbas, however, the short-term resumption of hostilities, after some provocation, is quite capable of it. Foreign Minister Sergei Lavrov warned before the New Year that Kiev “has plans to again resort to military power in the Donbas.” At the same time, the “occupation regime” can break out of the Minsk agreements.

Although, formally, the “Minsk-2” ended, Kiev remained in the Minsk trap. He has already tried to break the Minsk fetters, proposing to “expand the Minsk format”, introduce peacekeepers to the Donbass, but all is in vain, Europe is silent on all these proposals, and talks about the prolongation of the “Minsk-2”. So, Kiev will have to "solve" the Minsk question itself. And, perhaps, in spite of Joe Biden. 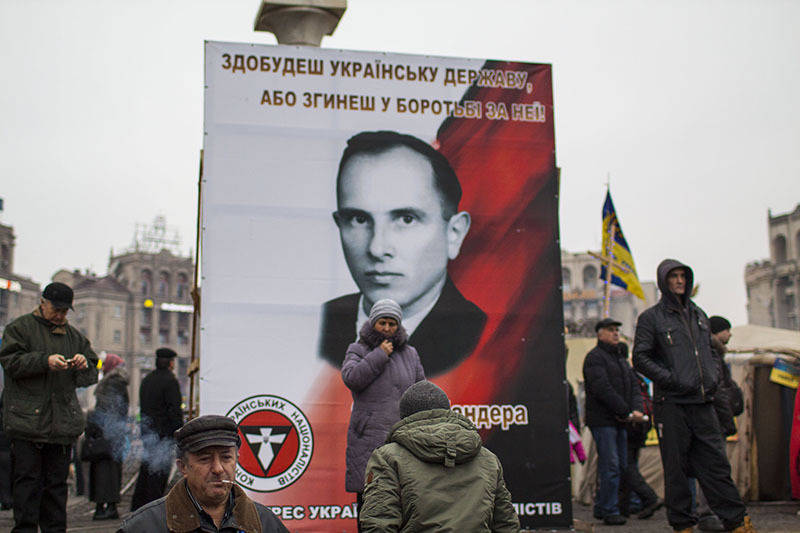 Surprisingly, the US Vice President Joe Biden himself, on his last visit to Kiev, spoke in the Verkhovna Rada (!) About the need for Kraina to fulfill the Minsk agreements, that he does not see anything terrible even in the formation of the United States of Ukraine! ..

What is this happening? First, “the West took advantage of the discontent of the people in Ukraine and carried out a coup d’etat,” according to an expert assessment of Vladimir Putin, and today he himself offers a separatist plan to Bandera’s Kiev!

Someone in something here for big lies, and gives out the desired for the real. Under such uncertainty, Moscow adheres to a simple CAS plan - “consume yourself”. Russia has nowhere to hurry: it is necessary to wait for at least the end of the celebration of the second anniversary of the neo-Nazi “revolution of dignity”.

... The expected major New Year terrorist attack in Europe did not take place. Turkish special services allegedly handed over to German colleagues data on the impending terrorist act at the Munich railway station. However, there were no detentions of terrorists, were they also warned? ... Instead, there were light terrorist acts against women in Cologne, and women's values ​​in Europe were threatened ... Nobody transmitted any data to the French special services at the time, and the Paris press spoke in retaliation about the Turkish trail of the terrorist attacks in Paris. About the times, about morals ...

Ctrl Enter
Noticed oshЫbku Highlight text and press. Ctrl + Enter
We are
Situational analysis of the death of the MH17 flight (Malaysian Boeing 777), made on the basis of engineering analysis from 15.08.2014Bashar al-Assad: In Syria, not the “revolution” that the enemies are talking about, but the revolution of the army and the people against terrorists
Military Reviewin Yandex News
Military Reviewin Google News
109 comments
Information
Dear reader, to leave comments on the publication, you must sign in.