How Russian engineering has made today's operation in Syria possible (The Saker, USA) 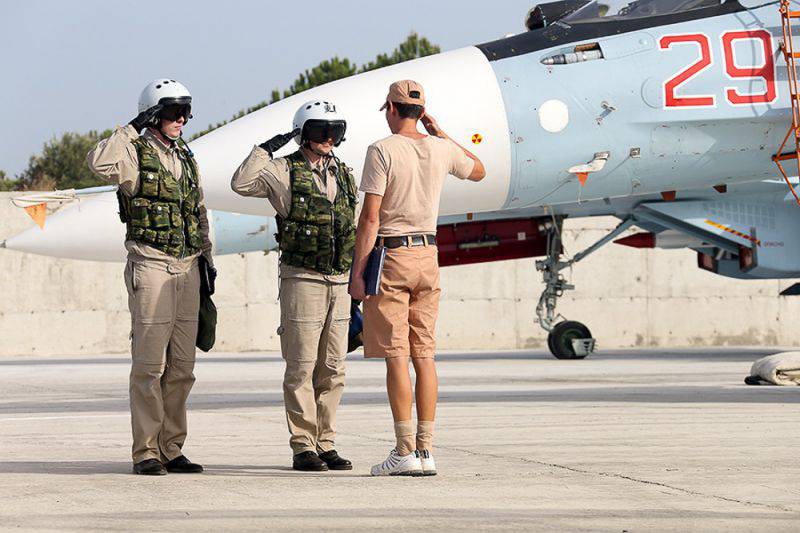 The pace and effectiveness of the Russian Air Force (they are now called aerospace forces, so I will call them RVKS below) impressed Western military experts. Not only is the number of sorties three times greater than what the United States and NATO countries were able to achieve, but the Russian bombardments are surprisingly accurate, despite the fact that Russian planes fly at an altitude above 5 km, beyond the reach of MANPADS. They fly even at night and in bad weather. This is even more surprising when you consider that most of the work is done by Su-24 (adopted in 1974 year) and Su-25 (adopted in 1981 year). Most of the tasks in Syria can be solved by these two remarkable, but, frankly, ancient aircraft, while the purpose of the presence of the new advanced Su-34 are its tests (and, after the Turks brought down Su-24, providing protection against air attacks). What is going on? How does Russia achieve such almost miraculous results?

This was achieved using SVP-24.

But first I have to describe the bombing process.

The simple bombs of “World War II technology” are gravitational. The planes dropped them with a simple aiming system, and they hit (more or less) on the target. It was normal for carpet bombardments, it was not ideal for aimed bombardments, but given the low speed of the aircraft and low altitudes, it is acceptable. But with an increase in the speed of the planes, being late in dropping a bomb in one second could lead to a bomb fall in 600-800 meters from the target. In addition, for some fortified targets (command posts, bridges, etc.) a direct hit is needed. Two types of guided bombs were created: laser-guided and television.

Laser-controlled bombs work very simply: an airplane (or a gunner on the ground) “indicates” the target with a laser beam, and the bomb has some (limited) ability to plan for this clearly visible illuminated spot. Tele-guided bombs also work simply: her camera is sent to the target, and the bomb plans to it. If the bomb is in a certain “zone” (speed, altitude, direction), it will fall. Or miss. Because even a tiny cloud can dramatically reduce the accuracy, which at the current speeds of the aircraft can lead to a miss in hundreds of meters (who is interested can read this article in Wikipedia).

The advent of satellite targeting has opened a new era of advanced weapons. For the first time, it became possible to use signals from GPS satellites (for Russians, GLONASS) for aiming a bomb at a target. The bombs sent by the satellites were not only more accurate, but they did not depend on the weather. The main problem was their high cost. Another problem was that the warehouses were packed with old, cheap, non-guided bombs. What to do with them?

The Americans came up with an elegant solution: JDAM (Joint Direct Attack Munition). The JDAM set was a way to turn a “stupid” (hated) bomb into a “smart” (suggested) bomb by attaching special devices to it. You can learn more from this Wikipedia article. This allowed the use of old bombs, but was not cheap: ~ $ 25 000 for fixture (by wikipedia).

The Russians came up with an even better solution.

Instead of putting devices on each bomb and losing it every time, the Russians put a JDAM device, but on the plane. 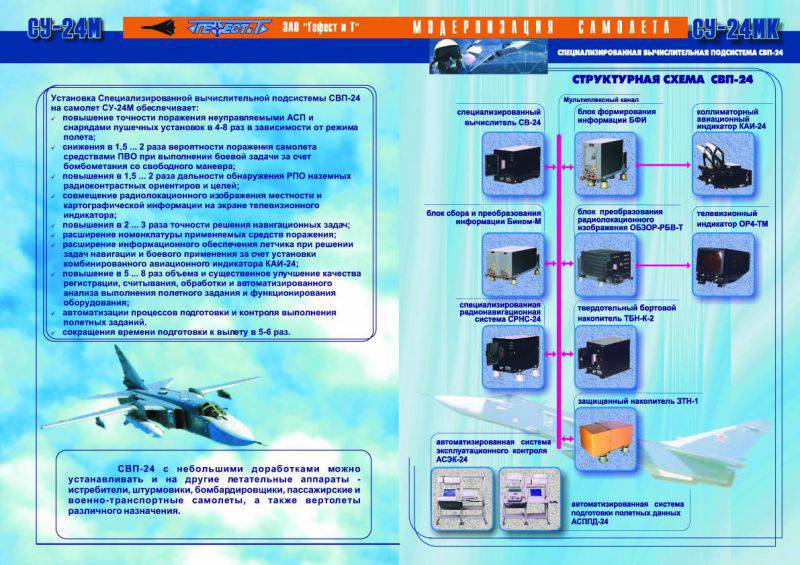 This is the SVP-24. SVP stands for “specialized computational subsystem”. This system constantly monitors aircraft positions and targets (using GLONASS), measures pressure, humidity, wind and plane speed, and flight direction. It may receive additional information from AWACS aircraft, ground stations, other aircraft. SVP-24 calculates the parameters (speed, altitude, course) at which the “stupid” bomb should be automatically dropped exactly at the moment when its uncontrolled flight leads it exactly to the target (within 3-5 meters).

In practice, this means that every old (age 30 and older) Russian bomb can be delivered by an old plane with the same accuracy as new guided bombs delivered by the newest bomber. 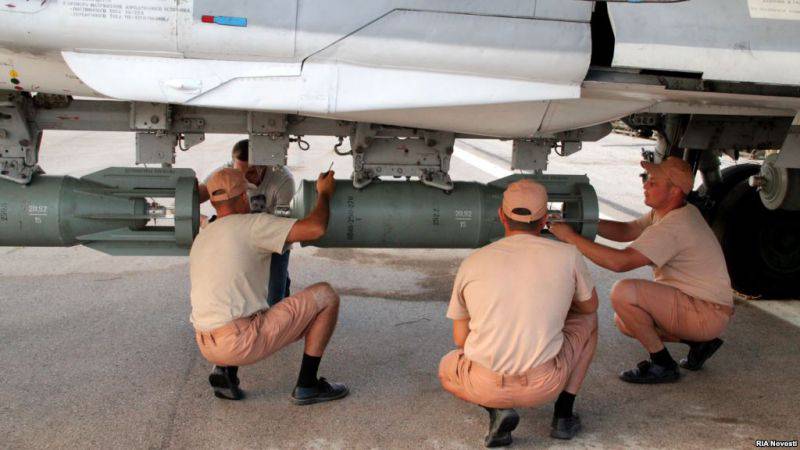 And that is not all. The pilot doesn't even have to think about aiming. He simply enters the exact coordinates of the target into the system, flies to the desired area, and the bombs are dropped automatically. It can focus on detecting enemy actions (aircraft, missiles, anti-aircraft guns). Best of all, this system can be used for bombing from high altitudes,> 5000 meters, where MANPADS cannot reach. In addition, clouds, smoke, weather, and the time of day are irrelevant.

Last but not least, this is a very inexpensive solution. Russia can now use the huge reserves of “stupid” bombs accumulated during the Cold War, it can deliver an almost endless supply of such bombs to Syria, and each of them will hit the target with phenomenal accuracy. Since the SVP-24 is located on an airplane and not on a bomb, it can be reused.

It has already been confirmed that the SVP-24 are installed on the Russian Su-24, Su-25, Tu-22М3, Ka-50 and Ka-52 helicopters, deserved by MIG-27, and even at the training L-39. That is, it can be installed on almost all helicopters and aircraft, from large bombers to small training aircraft. I am sure that Mi-24 and Mi-35М in Latakia are also equipped with this system.

Here are the components of the system SVP-24 (photo from the MAKS air show in Zhukovsky): 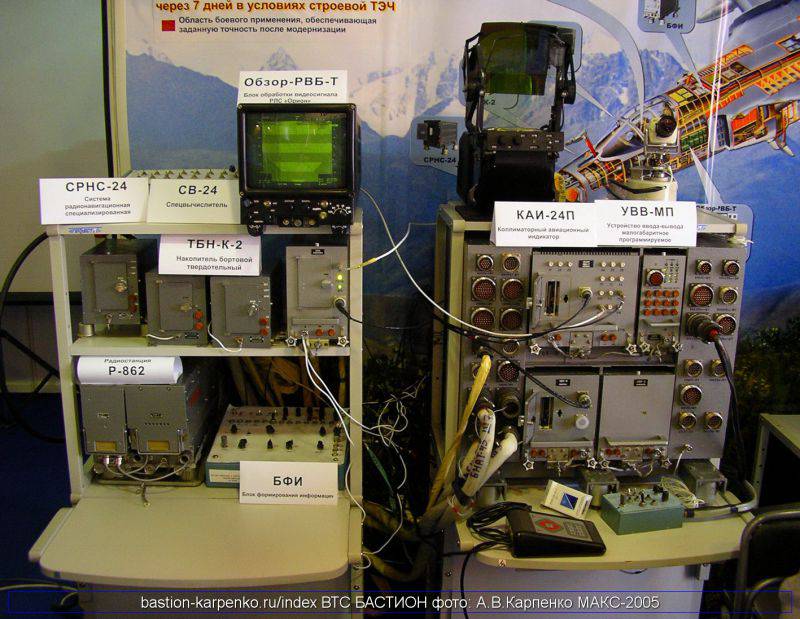 In conclusion, I note that not everything in the Russian army is rosy and perfect. A company producing SVP-24 was supposed to collect money from the Ministry of Defense through the courts, and there were many opponents of SVP-24 in the ministry itself (probably due to the influence of corrupt competitors). Ultimately, the problems were solved, and SVP-24 was delivered in large quantities, but this required a long, bitter struggle. So, as in the United States, corruption in Russia remains one of the most dangerous enemies of the armed forces.

In any case, I hope that this excursion “under the hood” was interesting for you.

Ctrl Enter
Noticed oshЫbku Highlight text and press. Ctrl + Enter
We are
About Stalin and KhrushchevWhat you didn't want to know about England
216 comments
Information
Dear reader, to leave comments on the publication, you must to register.