January 7 2016
64
After 1, January, the world in Ukraine is held on a verbally prolonged thread of the Minsk agreements. In addition, it is being tested in January frosts, and the agreement on mutual electricity flows between Russia and Ukraine has not been concluded. Due to the termination by Ukraine of electricity supplies to the Crimea. Plus, the default has just been a Euro-associated Bandera Krajina in front of Russia. While all this has no consequences, maybe just the New Year holidays are not over yet? 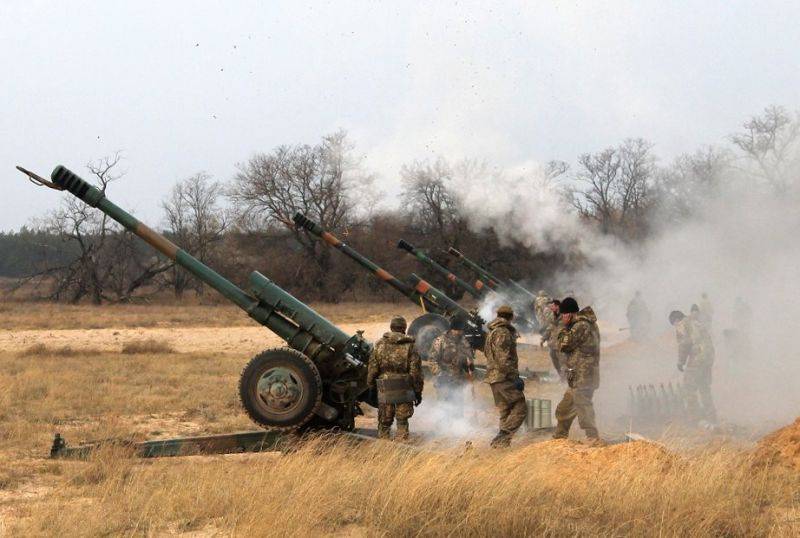 The position of Russia has long been set out by Sergey Lavrov, it remains unchanged: “Minsk-2 is a complex of measures, everything should be fair, this time”. That is, it will end with the recognition by Kiev of the Donetsk and Lugansk republics. Such a scenario does not suit Kiev for ideological reasons, but formally “Minsk-2” has ended ...

Recall that the Kiev junta fell into the Minsk trap after Poroshenko’s call to Washington, apparently, to US Vice President Joe Biden, who sanctioned it. Why? Apparently, they hoped that all the agreements of “Minsk” would be written off by the war, the summer campaign of 2015 of the year, which ... the chancellor of Germany Merkel had frustrated by calling Poroshenko to Berlin “on the carpet” of August August, after the call of Vladimir Putin ...

One way or another, the summer offensive of the Armed Forces of Ukraine did not take place; moreover, a real truce was established for the first time in the Donbass on September 1: for quite a long time, the front line was really quiet. True, as if in retaliation for Germany, there was an autumn invasion of Middle Eastern migrants through Turkey to Europe, the ultimate goal of which was precisely Germany.

The Kiev regime, probably, has not yet decided what to do with the Minsk agreements. Nazi patriots are pushing him towards the demonstrative denunciation of the Minsk-2. But the January frosts and energy fears force Kiev to winter prudence.

All “think tanks”, of course, analyze the question: what could be after the breakdown of the Minsk agreements?

Russia may deny the Kiev regime of legitimacy, and blame the revival of Bandera neo-Nazism. Judging by the phrases about Putin “of the NATO Legion” in Ukraine, and “the so-called volunteer battalions” that slipped through Putin, Moscow has a corresponding “plan B” for this case.

Vladimir Putin expressed himself in a similar way before the conclusion of the Second Minsk Agreements, that is, Moscow was ready at that moment to take decisive action in Ukraine, once used such definitions of the Kiev regime. After the "Minsk-2" close to the neo-fascist definitions of the Kiev authorities disappeared from the lexicon of Vladimir Putin. Why? “I have no right to emotions,” Putin answered this question in an interview with V. Solovyov in his film “World Order”.

However, Kiev’s charges of neo-Nazism may return to Putin’s political dictionary, and to our Foreign Ministry, after the breakdown of the Minsk agreements. With all the political and even military consequences. Just before the New Year, the Russian Foreign Ministry made a remarkable statement in this regard: “Europe has done nothing to encourage Kiev to execute Minsk.” That is, to abandon their neo-Nazi manners. One of the variants of such a development of events may be the recognition by Moscow of the Donetsk and Lugansk republics, regardless of the reaction of the Western community to this. According to the results of the elections, or based on the current military-political situation.

West after the breakdown of "Minsk" is also likely to change its strategy. European Commissioner for Trade Malström defiantly interrupted the tripartite negotiations on the Euro-Association of Ukraine, also before the New Year, saying “game over” to Russia, the game is over, this is diplomatic rudeness, and it speaks about the mood of the Brussels leadership: after the “Minsk” the European Union can begin a more rigid game with Russia. Question: what game and how much will it be coordinated with Washington? Which has already begun to prepare for the presidential election. And what does Chancellor Merkel think about this?

Break Kiev-2 Kiev can in two ways. For example, short-term resumption of hostilities, after some noisy provocation. Blame Moscow for military exacerbation and thus obtain an excuse for quitting the Minsk agreements.

Kiev may withdraw from “Minsk” even without the resumption of hostilities, ostentatiously, simply because Russia allegedly does not fulfill its “obligations” if it is confident of connivance and support from the West. Since, formally, the blame in this case falls on Kiev, because it is he who announces the withdrawal from the Minsk agreements. Slipping out of the Minsk trap, Kiev will get the desired freedom of hands, but for what?

For the resumption of hostilities in the Donbas? Their result is unpredictable ... It seems that Kiev is more profitable hotbed of tension in the Donbass, for inducing propaganda hysteria in the country.

Obviously, the disruption of the Minsk agreements will fulfill the requirements of the Bandera neo-Nazis, and will increase the degree of tension in Ukraine. But the resumption of a large-scale war "to the bitter end" on the initiative of the Kiev junta seems unlikely. If only because the presidential election in the United States this year, and Vice President Joe Biden explicitly told the Banderovites in his last visit, that America, of course, will help them, but they should only rely on themselves. And even strive to perform "Minsk".

However, the opposite scenario is possible: Washington can lie. Due to the aggravation of his own political and financial instability, he can take a global course on confrontation and the resumption of all possible wars in order to disrupt the normal democratic electoral process in the United States and predetermine the results of the presidential elections, eliminating any chance in the form of Donald Trump.

Then the disruption of the Minsk agreements will be sanctioned by Washington, and will be the prologue to a full-scale war involving Russia in Ukraine, but not with Ukraine, as Vladimir Putin said, but with the “NATO legion” in Ukraine. Feel the difference…

Ctrl Enter
Noticed oshЫbku Highlight text and press. Ctrl + Enter
We are
Situational analysis of the death of the MH17 flight (Malaysian Boeing 777), made on the basis of engineering analysis from 15.08.2014Results of the week. "Whose will you be?" Whose serf, I ask? "
Military Reviewin Yandex News
Military Reviewin Google News
64 comments
Information
Dear reader, to leave comments on the publication, you must sign in.