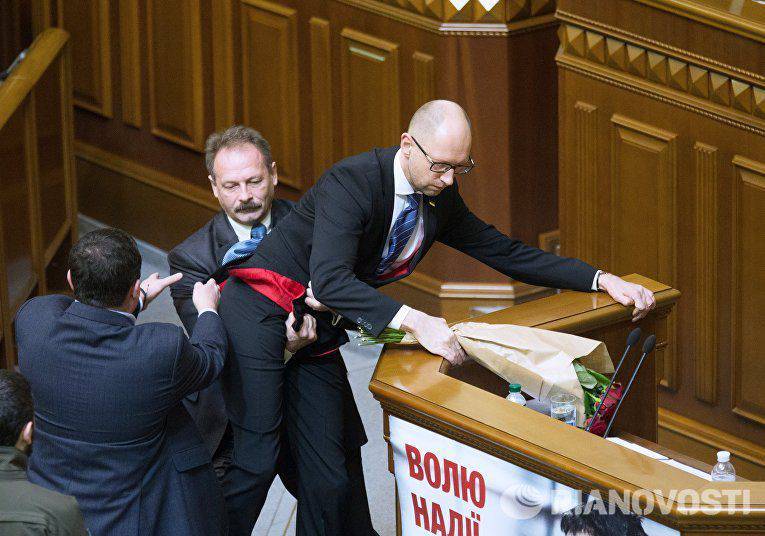 The eve of 2016 in Ukraine was marked by a series of notable events. All of them are reducible to a common denominator, whose name is the agony of the regime. Ukrainian government rescues Ukrainian government from collapse, which avoids “Russian Maidan” in Kiev after “Maidan American”

Contrary to the fact that 2016 is considered the Year of the Fiery Monkey according to the eastern calendar, the coming year seems to be the next year of Rabbit for Ukraine and Ukrainians, not only that of the Chinese and their neighbors, but of their own, Kiev. Dawning to the first billion, finally overbearing and clutching, who lost the remnants of shame, the thievishly boorish Rabbit Canopy and his insatiable friends.

The end of 2015, the Kiev authorities spent in the usual for her works and concerns, pointing at Russia, bowing to the United States and Europe, dragging away the things that had not been stolen, passing black for white, throwing clouds of dust in their eyes in an effort to present their failures and atrocity successes. Under such a “noise” accompaniment, at the same time fulfilling the role of a smoke screen, the leaders of “Euro-Ukraine” continued to fill their pockets and pockets, especially zealous in the “themes” to which one side or another manages to attract Russia. Business on “repelling aggression” has become for the current ruling elite in Kiev the sweetest and most profitable.

From the first days of being in power, having abandoned any dialogue with society, the Kiev favorites of the White House now have come to a frank demonstration of utter contempt both for public opinion, and for social problems, and for the real needs of the population. In an effort to, if not to be true Europeans, then to appear as such, the higher ranks of the “Maidan” regime in the last days of 2015 took up an ungrateful task: telling Ukrainians how they live well under the new government.

The one who lived under “Maidan” does not laugh in a circus! A series of appearances on the air of Kiev "stars" turned into a parade-alley, to which the best circuses of the world would envy. The self-reports of the first persons of the state administration system and the sign political people of Ukraine about the work done and its results were astounded by the pathological wretchedness of the content and glaring grotesque form. If someone had illusions about the adequacy of Kiev, its ability to make responsible decisions, heard and seen on the eve of the onset of the year 2016 th dispelled them completely and completely.

Not so long ago, the Minister of Finance N. Yaresko described the course of negotiations with foreign partners, creditors about the restructuring of Ukraine’s external debt with the words: “negotiations are under way, but more difficult than expected.” For almost two years of being in power, the “team” of P. Poroshenko - A. Yatsenyuk turned out very little from the planned and promised. Everything that was not done and was not undertaken in all spheres without exception, if it moved forward, it is always “more difficult than expected.” Afraid of retaliation for the illegal seizure of state power, huddled in the cracks when the Crimeans began their journey home, they lost Crimea. Hoping it is not known what, they made porridge with “ATO”, actually lost Donbass. Yes, and, moreover, they received an additional “more complicated” one: the “operation” developed into a civil war. Having promised with three boxes, Western patrons and sponsors were forced to take on the “reforms”, however, and then everything went “more complicated”. What the golden pens of the “pro-European reformers” did not concern, the spreading “golden willows” grew everywhere, but the real result of the changes turned out to be directly opposite to what was planned and declared as desired.

One of the reasons for this state of affairs lies on the surface. This is the dense dilettantism of the imperious "team." The second reason is the presence of literally in every step of the regime of motives and goals not only open, but also hidden, in the majority of cases selfish, corrupt, criminalized. There is a third, much more weighty, fundamental than the previous two. The authorities have relied on the United States, refusing any contacts, from any interaction with Russia. Kiev, either by stupidity, naivety, or by someone’s malicious hint, overestimated the role of the first, underestimated the significance of the second. The slogan “Away from Moscow!” Directly contradicts the national interests of Ukraine. Without Russia, for Ukraine everything has always been, is and will be - “more difficult”. Dealing with Kiev, which has been drawn into a state of deep and acute confrontation with Russia, barking at Russia, like the Pug at the Elephant, at war with Russia, very few subjects of international relations agree. Far more willing to see Ukraine building relations with Russia on the principles of good neighborliness and cooperation. This, however, is far away.

After 11 in December, the government and its head personally littered the annual report with BP, once again confirming the absence of not only control over the situation in the economy, but even understanding what it is, it would seem that none of the ministers would ever take the risk appear in front of the cameras. Not here it was! The prime minister, without a doubt, gathered a pompous press conference at which he began to list his achievements and achievements. He offered special praise to his beloved for a multiple increase in defense spending, as if deliberately exposing a bold piece of the budget pie, which he is going to cut with his comrades in the new year through the Ministry of Defense and the Ministry of Internal Affairs.

Parliament, having noted a tentatively long series of decisions and incidents from the arsenal of house gatherings, circus performances and performances of wandering amateur theaters, adopted a budget for 2016 for the country and for the majority of its population. After that, the speaker of the parliament V. Groisman suddenly took on the unusual role of a newsmaker, for no reason at all, calling this parody of a financial document ... the cornerstone of a new economic policy.

The president, whose support level dropped below the mark on which V. Yanukovich’s rating was on the eve of his flight from the country, within just a few weeks made such a number of unexplained steps that it only remains to be given. The desire to stake out a position over the clash of competing political forces, financial-industrial groups and criminal clans is given to him all the harder. Control over the political process and its participants has long since been lost. That is why he did not try to stop A. Avakov and M. Saakashvili, who staged an orgy in his presence with obscene language and throwing glass at a meeting of the National Council of Reforms. In a video report that preceded his New Year's address to the nation, Poroshenko surpassed everyone and everything, including himself, by proposing to write down a Russian military plane shot down by the Turks as a result of the outgoing year. Against this background, the appearance in the general series of “successes” of the head of state, according to Bank, the appearance in the parliament of the vice president of the United States, distributing instructions and instructions, did not, of course, cause the slightest surprise.

The three first leaders of the highest state authorities signed a document on unity and harmony, in which the “reflection of aggression” was declared the main merit. That same aggression from Russia, which was not and is not. Recall that the country by their grace and by the decree of A. Turchinov, who joined them, has been in a state of “anti-terrorist operation” for the second year already, it has not occurred to them. Although it was Kiev’s decision to terminate the “ATO” that could initiate a real settlement of the crisis in Donbass.

The political circus, organized by the authorities on the eve of the New Year, is terrible and dangerous in itself. Against the background of the pre-default situation in the economy, the catastrophic situation in the social sphere, the final loss is the center of control over a number of regions, corruption lawlessness, deterioration of international reputation. Mode burned bridges. No one on Bankova or Grushevsky thinks about the future transfer of power. The arrival of new people in the main offices of the country for their current owners would mean initiation of criminal cases against each of them, imprisonment, confiscation of property. That is why P. Poroshenko, A. Yatsenyuk, and A. Turchinov will go to the end, not stopping before a new military adventure in the Donbas, neither before aggression against the Crimea, nor before armed provocations against Russia, nor before actions capable of for the collapse of Ukraine and the disintegration of its state territory. Anyone who believes that they can come to an agreement with them is mistaken.