Iraqi and Syrian fronts: the war will become fiercer and spread to Turkey 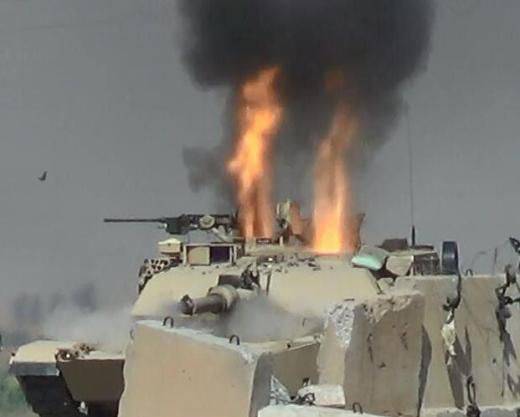 Given the war in Yemen, the Middle Eastern front remains the main front of world war. Despite a number of tactical successes of the government troops, the war in Iraq and Syria will only get worse, will be further developed. At the end of 2015, the media reported on the release of the city of Ramadi in Iraq from ISIL (a banned organization in Russia) as a fundamental military success of the Iraqi troops. In Syria, government forces, with the support of Russia, Iranian and Lebanese allies, were able to achieve a number of tactical successes in the provinces of Aleppo, Latakia and the suburbs of Damascus.


However, it is impossible to suppress the ideology and social base of Islamic radicalism, jihadism (“black Islam”) by military means. The project "Caliphate" continues to gain momentum and spread. Neither in Iraq nor in Syria, a real breakthrough is foreseen in the near future. The war is becoming more violent, attracting new players, resources, and is entering a stage of civilizational and religious confrontation. Thus, the Sunni-Shiite conflict and the South-North fault clearly come to the fore.

Restoring control of the Iraqi army over Ramadi does not really matter. Firstly, ISIS units do not cling to objects. There is no "Stalingrad." Mobility is paramount. Secondly, it is more a PR action than a real combat operation. Millionth city does not take a day, when it is defended. In general, the struggle for a huge city has been reduced to the seizure of several buildings where state institutions were located. Militants of the desert - the province of Anbar, and may give so, do not mind. Also, they can and soon repel a sudden blow. Third, Baghdad finally loses control over the population. The Sunnis were completely disillusioned with the government, that is, the social base of the militants was not only preserved, but also strengthened.

The peculiarity of the war in Iraq is the split of the population into Shiites, Sunnis and Kurds. And the bulk of the population, except for the Kurds, who have created their own state in the state (Iraqi Kurdistan), is completely passive to what is happening. People are tired of continuous war, which with a few interruptions stretches from 1991 year. They are more occupied with questions of supply, survival, and not “politics”.

Therefore, Baghdad cannot defeat the “Caliphate” militants, having a great advantage in manpower and equipment, assistance from Iranian military experts, as well as air support from the Western coalition. The modern Iraqi army, despite the brutal defeats (like the fall of Mosul), was not able to "get in shape." Unlike Saddam’s army, an industrial-type army, it was created by the Americans as a military-police force. Such an army can successfully crush the speeches of the population, but cannot withstand the militants who are motivated and have combat experience. Not surprisingly, government forces suffered heavy defeats from jihadists in 2014 when they attacked the provinces of Anbar, Ninawa (Nineveh) and captured Mosul, Falluja, Tikrit and Ramadi.

Now the Iraqi troops support the Shiite militias and Iranian military experts, part of the responsibility in the fight in the IG took the Kurds. However, system problems are not cured. Firstly, the level of command has seriously decreased compared to Saddam's times, as earlier, as part of the Debascation, qualified military men were expelled from the army. Many of them went into opposition to the ruling regime and joined the ranks of ISIL. As a result, in planning, the IS command is much better than the command of the Iraqi army.

Secondly, the level of motivation of government troops is much lower than that of jihadists. There is no idea for which Iraqi soldiers are ready to die. The Iraqi army has a small number of well-trained units, including police. But they are capable of guarding only part of Baghdad and closing gaps. For a war with tens of thousands of militants and the control of vast desert territories, they are catastrophically insufficient. Shiite militias are more motivated, but they are not very controlled by military commanders and often wage their own war against Sunni tribes. Which brings the war to the level of the Sunni-Shiite conflict. Local tribes are accused of aiding the terrorists, punitive operations are being carried out against them, they are being expelled from their homes, pressure is exerted on Sunni sheikhs. It is clear that this only strengthens the position of the jihadists. The previously neutral tribes oppose the government.

Thirdly, Baghdad should simultaneously solve the problem of the actual independence of Iraqi Kurdistan. The Iraqi command part of the effort is directed at preventing the Kurds from acting in the north of Iraq on their own. Therefore, Baghdad is constantly dispersing forces and can not concentrate them to fight the troops of the IG. So, Ramadi attacked exclusively Shiites - the Iraqi government was able to mobilize only Shiite militias to attack the IG. But, since there was no resistance, one incomplete brigade calmly entered the city.

In addition, Baghdad cannot fully rely on Tehran. The Iranian intervention causes discontent among the Sunni population, the Western coalition and the Arab monarchies.

As a result, the whole war looks like a kind of "Makhnovshchina" - both sides are raiding foreign territory. The population is so passive that several hundred or thousands of well-armed militants can control vast territories and million-plus cities. Battles are fought only on several directions by percussion companies with several units of armored vehicles and artillery. Jihadists are actively using car-tachanki with heavy weapons.

In general, Baghdad does not have any intelligible concept of military actions and a plan for the restoration of liberated territories, reconciliation of religious and ethnic groups. Goals are replaced by a process. As a result, Iraq continues to collapse, and the war can last almost infinitely. The Sunni-Shiite fault intensified. External players are also not interested in rebuilding a strong Iraqi state. Thus, real successes on the Iraqi front are not foreseen in the near future, the war with the Islamists can last indefinitely. Prospects for ordinary people the most bleak. The project “Caliphate” in such conditions for a significant part of the population of Iraq looks like an alternative.

The war in Syria will continue. The “caliphate” will not go anywhere, and government forces are unlikely to be able to regain control over most of the country in the near future. Apparently, Turkey, Saudi Arabia and Qatar will continue to support "their" militants. Despite the fact that the situation in the region affects negatively the sponsors of international terrorism themselves.

There is a formalization of the division of Syria into several unequal ethnic and religious parts. The non-religious and non-ethnic ideology of “Arab socialism” of the Baath party, which has long cemented the Syrian state, has been destroyed. Whole groups of people leave areas surrounded by government troops and move in an organized manner in the north-west direction - closer to the Turkish border. It is possible that jihadist forces previously scattered on several fronts are finally localized on the border with Turkey, not only militarily, but also as a population.

In this case, the fierceness of hostilities will increase. In addition, it is obvious that the wave of chaos will cover Turkey, which from the very beginning actively intervened in the affairs of Syria. Informal participation in the Syrian war, support for militants, the creation of supply bases, sanatoriums and clinics for Islamists on their territory, support for Syrian Turkmen and pressure on Syrian Kurds, the arrival of millions of refugees, all this destabilized Turkey. It is also worth remembering about the intervention of the Turkish troops in Iraq (Iraqi Kurdistan) and the struggle against the Kurds in Turkey itself. Repression of Islamists in Syria itself to the border with Turkey will only add kerosene. The war in Syria will expand towards the territories of Turkish Kurdistan.

How can Russia strengthen government forces? First, it is necessary to strengthen the air force in Syria, including attack helicopters. Secondly, Russia can create a training camp in the free territory and train battalion tactical groups of the Syrian army there, saturating them with Russian equipment and weapons. Thirdly, to help the Syrian army close the border of Turkey and Jordan, where the militants are fairly free to move. Without support from abroad, fresh militants, weapons, ammunition and gang equipment will be easier to defeat. Fourthly, the formation of a volunteer corps is possible. With his help, we will be able to conduct training for the combat core of the Russian army (with experience of war) and experience various equipment and weapons in wartime conditions. Once we are involved in this war, then it must be won. And Syria must become our strategic stronghold in the Middle East.

It is worth noting that Russia's participation in the war in Syria led to an increase in strategic risks associated with the unpredictable situation in the Middle East region itself. The main trouble can be expected from the sharp actions of regional players. So, already collapsed 20-year partnership of Russia and Turkey. Moreover, there was even the threat of a growing conflict. There is a threat from the Arab monarchies of the Persian Gulf, which provide support to terrorist groups in Iraq and Syria. There is the threat of a full-scale conflict between the Shiite and Sunni worlds, Iran and Saudi Arabia. The situation may change in unexpected ways.

Blitzkrieg coalition led by Saudi Arabia failed. Saudi Arabia began the war to prevent the Hussites (Shiite rebels), who formed an alliance with the retired President Saleh, to establish control over the entire territory of Yemen. As a result, Iran could get an important bridgehead on the Arabian Peninsula. Riyadh could not allow this.

Despite the complete superiority of the coalition led by Saudi Arabia over the militias of the tribes, Riyadh could only stop the vicious movement of the Hussites. In turn, the Shiite rebels retained strong positions in Yemen and transferred the war to the territory of Saudi Arabia. In the future, the defeat of Saudi Arabia in this war inevitably leads to the beginning of the processes of disintegration on the Arabian Peninsula. The destruction of the strategic alliance with the United States; the fall in oil prices, which leads to the destabilization of the mono-economy of Saudi Arabia; support for terrorists in Iraq and Syria (with the IG transformed into an enemy of the Saudis); the war in Yemen, with its transition to the territory of the SA; the conflict with Iran, with the prospect of its escalation, all this condemns the kingdom to collapse.