The war of Iran and Saudi Arabia: who will win? 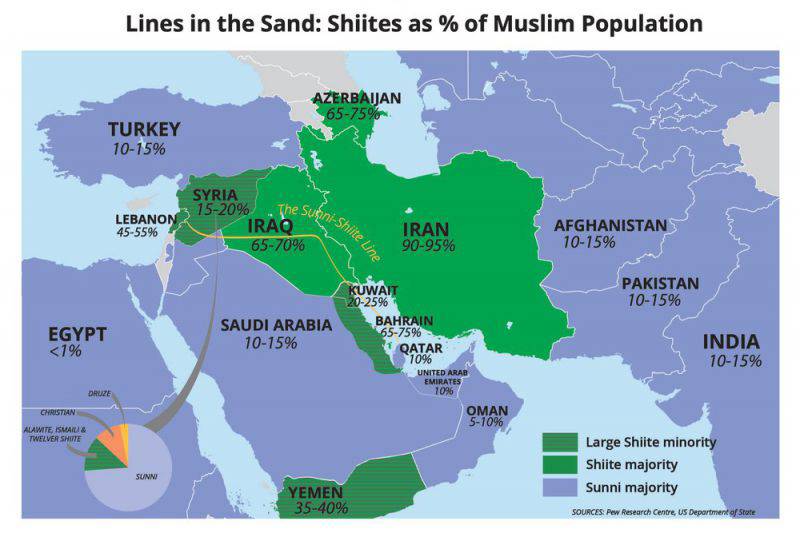 The execution of 47 "terrorists" in Saudi Arabia, including the Shiite preacher Sheikh Nimr al-Nimr, led to very serious consequences - now the entire region of the Middle East is on the verge of a regional war.

Moreover, what happened looks quite planned: the reaction of Iran and Iranian society were quite predictable, and the chain-breaking breaks in diplomatic relations with the main Shiite country on the part of the Islamic Military Coalition states (Saudi Arabia announced its creation in December 2015) look coordinated in advance. At the moment, Saudi Arabia, Bahrain, the United Arab Emirates and Sudan have already announced the severance of diplomatic relations with Iran, the ambassador from Tehran has recalled Kuwait. Saudi Arabia and Bahrain interrupted flights with Iran.

In fact, the indirect war between the "Sunni" and "Shiite" world is already in full swing - Syria, Iraq and Yemen became the main battlefields. Now there is far from zero the likelihood of a large regional war between Shiites, led by Iran, and Sunnis, with a leader in the form of Saudi Arabia. Therefore, it will be interesting to assess the strengths of the parties and the scale of what can happen in such an extremely negative scenario.

Saudi Arabia - “a colossus with feet of clay”?

The armed forces of Saudi Arabia are equipped with the most modern military equipment and in sufficient quantities. The country's military budget ranks 4th in the world, approaching $ 60 billion. The total number of armed forces is 233 thousand people. Ground forces are armed with up to 450 modern American tanks M1A2 Abrams, about 400 M2 Bradley infantry fighting vehicles, more than 2000 armored vehicles and armored personnel carriers, a large number of receiver and rocket artillery, including 50 American multiple launch rocket systems (MLRS) M270. In addition, the Saudi Arabian armed forces are armed with up to 60 Dongfeng-3 ballistic missiles purchased from China. Initially, they were designed to deliver nuclear munitions over distances of up to 2500 km, but in this case they carry high-explosive warheads, and the accuracy of a missile’s hit is very low. There are also rumors about the purchase of more modern Dongfeng-21.

As for the air force (Air Force), they are armed with the American F-152 fighter 15 of various modifications, the European Tornado 81 and the European 32 European Eurofighter Typhoon. Also in service are aircraft long-range radar detection and control (DRLO) and a large number of military transport aircraft.

The naval forces are divided into 2 parts: the Western fleet in the Red Sea and the Eastern fleet in the Persian Gulf. In the Persian Gulf there are 3 Al Riyadh class frigates (modernization of the French La Fayette) with Exocet MM40 block II anti-ship missiles (ASM) with a launch range of up to 72 km. In the Red Sea, there are 4 Al Madinah class frigates with Otomat Mk2 anti-ship missiles with a maximum launch range of up to 180 km, 4 Badr American corvettes with Harpoon anti-ship missiles. Missile and patrol boats are evenly distributed over fleets. As for the landing ships - there are 8 of them, and the maximum total landing can be up to 800 people at a time.
As we can see, the armed forces are impressively equipped, but there is one problem: despite this equipment and quantity, Saudi Arabia has not been able to achieve any serious success in neighboring Yemen in the 10 months, in which the army of the Hussite rebels opposes it weapons. This shows how low the actual combat effectiveness of the armed forces of Saudi Arabia and their allies is.

More: "The decisive storm" in Yemen: what does he decide?

Iranian Armed Forces - the largest in the region

Iranian Armed Forces have a population of thousands of people in 550 - the largest in the region. At the same time, the military budget in 2015 amounted to approximately $ 10 billion, which is quite small with such a number. There are more than 1600 tanks in service, of which around 480 are relatively modern T-72Z and 150 Zulfiqar tanks of their own production (presumably based on T-72 and American M60). Infantry fighting vehicles and armored personnel carriers are represented by hundreds of obsolete and obsolete Soviet models, as well as artillery.

The air force is represented by a large number of aircraft of various classes and different countries of production. True, there are no new products among them, and the long sanctions period probably affected the combat readiness aviation - hardly more than 50% of them are in flight condition. In service are the American F-14 supersonic interceptors, the long-obsolete F-4 Phantom and F-5 Tiger fighters, and the French Mirage-F1. Of the Soviet vehicles, there are MiG-29 fighters, Su-24 front-line bombers, and Su-25 attack aircraft. In total, there are about 300 units of the above equipment.

As for the Navy, the diversity is noticeably greater than that of Saudi Arabia. In addition, most of the ships are concentrated in the Persian Gulf (a small part of the ships is located in the Caspian Sea). There are 3 submarines of the 877 “Halibut” project, another 26 small locally produced submarine, carrying mines and torpedoes, 5 frigates, 6 corvettes (all of its production), more 50 missile boats (Chinese, Iranian and German). Interestingly, all Iranian rocket ships use Chinese-made anti-ship missiles - C-701 (35 km range, anti-submarine) and YJ-82 (range to 120 km).

Thus, Iran has an advantage over a potential adversary in terms of the Navy. In addition, as a result of many years of existence under Iran’s economic sanctions, its own military-industrial complex has emerged - perhaps its products are not distinguished by some great characteristics; nevertheless, it provides the country with some independence from external supplies. The missile program has achieved quite a lot of success - the country is armed with a whole range of short and medium range ballistic missiles, cruise missiles, etc. In total, their number can exceed 200 − 300 units.

The most likely scenario is a further increase in the intensity of conflicts in Syria, Iraq and Yemen.

The geographical position is not very conducive to the beginning of a direct military clash between the countries - Saudi Arabia and Iran do not border with each other. Therefore, the parties are likely to increase involvement in conflicts in Syria, Iraq and Yemen. This will not lead to anything good for these countries, but will only further extend the hybrid wars going into them. True for Saudi Arabia, Yemen may turn out to be a “weak point” - despite 150 thousandth ground grouping, 185 aviation units (including allies), the operation against the Hussites does not lead to any results. The reason for this is both the very low combat capability of the Saudi Arabian Armed Forces, and the competent actions of the rebels, who are probably supported by Iranian specialists. If this support intensifies (technically it is not easy, since Iran can only maintain contact with Yemen by sea), together with the presence of Shiites living compactly in Saudi Arabia, this situation can lead to a disaster for Riyadh. In any case, such a scenario is a further stage of the war of attrition - war, which is also combined with the struggle for oil markets, as a result of which all increase the production of "black gold" and bring down prices on the exchanges. In such a scenario, the side that used to be “torn” will lose.

Full-scale war - chaos for many years?

If, however, a full-scale war breaks out, the main "battlefields" will be the Persian Gulf, and probably the territory of Iraq and Kuwait (they are between Saudi Arabia and Iran). At the same time, Qatar is definitely an ally of the Saud, and the current authorities of Iraq are allies of the Iranians. Despite the apparent preponderance of Saudi Arabia and its allies, Iran has several trump cards - it controls the Strait of Hormuz and does not have a war in the rear, near its borders (like Yemen for Saud). The Iranian Navy is quite possible to "shut down" the strait for the passage of any enemy ships. Such a move will lead to an economic catastrophe for the Gulf countries that are members of the coalition against Iran, while the Iranians themselves will be able to continue exporting oil. In addition to stopping the receipt of money from the sale of oil, which nevertheless is one way or another temporary factor, Saudi Arabia, the United Arab Emirates, Qatar and other countries of the “Gulf” may lose all their markets, which the United States, Russia and all the same Iran.

If the war drags on, it will have completely unpredictable results - both sides will strike each other with ballistic missiles (here Iran will cause more damage), try to “set on fire” local opposition forces, incite neighboring countries against each other. All this can finally destroy the Middle East that we know and in a few years lead to the formation of a completely different map of the region.
The most important question that arises is what will such major Sunni allies of Saudi Arabia as Egypt, Pakistan and Turkey do. Pakistan’s direct intervention in the conflict seems extremely unlikely, as the country has a “longtime friend” in India and can be distracted by major conflicts with someone else. Turkey can intensify its actions in Syria and Iraq, and, given the rather aggressive policy inherent in this country, to intervene in the conflict. This may be of great help to the Saud, but Kurdish forces in Turkey may well take advantage of the moment and strike from within. As for Egypt, the country is far enough away from the possible theater of military operations and is unlikely to intervene more than it is now (at the moment the country is participating in the blockade of the coast of Yemen).

Ctrl Enter
Noticed oshЫbku Highlight text and press. Ctrl + Enter
We are
USA - the architect of the Sunni-Shiite confrontationIranian geography
108 comments
Information
Dear reader, to leave comments on the publication, you must to register.