January 13 2016
26
Man began to defend himself from a long, long time, then when weapons As such, it was not even mentioned. Man had to defend himself against weapons from the moment the weapon itself appeared. Simultaneously with the development of weapons for the offensive, weapons began to develop for protection: the protection of man, his body from sharp teeth, claws and horns of animals. Then it was a primitive defense made of improvised means: animal skins, the same horns, etc. Protective clothing was light, which provided the hunter with good mobility, did not interfere with running fast and being agile and evasive in a duel with a beast. Before becoming a full-fledged knightly latnika, completely covering the entire body of a person, protective clothing went a rather long way of development.


To protect against arrows, as well as from sliding accidental strikes, combat armor was intended, which even when penetrated, reduced the severity of injuries received. The chance of survival increased, that's all.

If we carefully consider the mass of armor, we will see that for several centuries it has not changed. In the XIII century - mail protection, in the XIV century - "transitional" armor, the XV century - a full latnik, XVI - XVII century - "three-quarter" armor, they all weighed the same: 30 - 40 kilograms. This weight was distributed throughout the body and was equal in strength to the average soldier (compare, the equipment of a modern soldier - 40 kg, a soldier from elite units such as the Airborne Forces - up to 90 kg). Only tournament armor, not intended to protect against accidental strikes or reducing the severity of injuries, was knocked out of this line, but to prevent them completely, even when struck with a spear with a ram on the chest. Naturally, this armor was not used in combat. Wearing armor for a long time exhausted the warrior, and in the heat he could get a heat stroke. Therefore, warriors often tried to at least partially free themselves from their protective equipment, even realizing that they could be taken by armor by surprise, because this happened often. Sometimes they also took off their armor when crossing or escaping, and sometimes they cut off to save their own life: armor is expensive and life is more expensive! 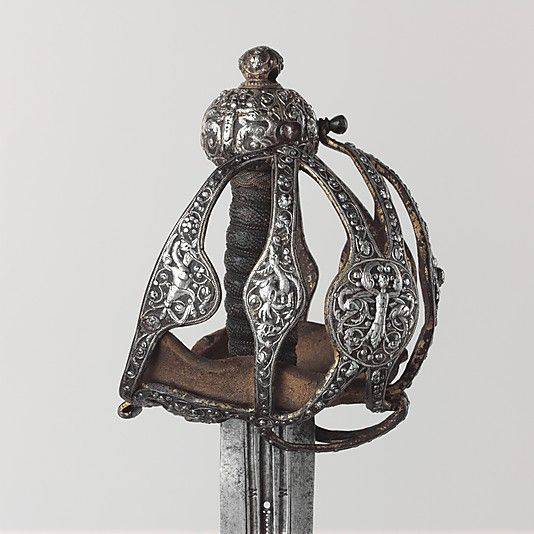 The awkwardness and clumsiness of a warrior in armor is nothing more than a myth. After all, combat plate armor, even very heavy, allowed the soldier who wore it to perform fully any movements necessary for combat, and some medieval sources describe the performance of acrobatic tricks by soldiers. It is enough to visit the Royal Arsenal in Leeds in England to animate the knightly duel of soldiers wearing Greenwich armor to see that they can jump and push each other's legs to the chest, and beat him in the face not with a blade, but with the hilt of a sword. However, during active operations, the warrior in the armor quickly got tired, so that to wear the armor needed an excellent physical training. By the way, animators in Leeds are sweating and tired ...

Special demands were made by European archers on the shoulders that interfere with archery, slowing down the speed of hand movements. Not every design of the shoulders allows you to raise your hands up completely or dissolve them to the sides with low energy costs. In Asia, they used kuyachny, laminar or lamellar designs — flexible sheets hung loosely from the shoulders, in this case mobility was improved by good protection, because the underarm area was not covered by anything.

In Europe, they began with the manufacture of sets of fairly light chain mail armor, and then consistently improved their protective properties. This was the beginning of the competition between offensive and defensive weapons. Only the widespread use of firearms ended this competition. Outside Europe, armor makers did not at all try to achieve absolute protection. The shield was maintained, actively accepting the blows of the enemy and protecting it from arrows. In Europe, by the 16th century, the shield fell out of use, since the new sword fencing technique allowed melee to do without it, began to take a lance blow directly to the cuirass, and the arrows were no longer scary.

So, instead of protecting the entire body of a warrior with solid plates characteristic of Europe from the 15th century, more powerful armor began to protect especially vulnerable places and vital organs, and the rest - mobile and light armor.

The historiography of England offers a lot of books on this topic - they just run up, and this is understandable - these are theirs. историяbiography of their country. Many current works are written in the last century, and the British themselves refer to them so far! But let's start with the background. And that's what we learn. 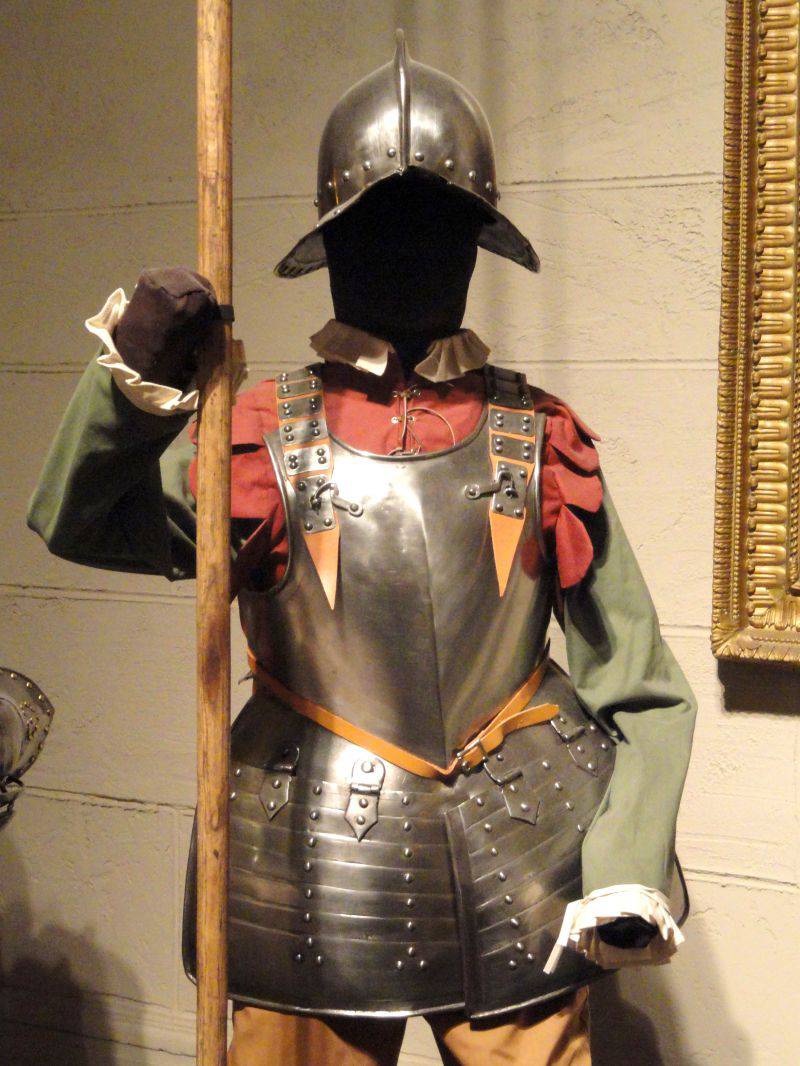 The armor of the English infantryman-pikener of the XVII century.


It turns out that in the 16th century, for example, in the 1591 year, English archers (after all, archers were used!) Demanded that they wear armor covered with bright fabric - a “combat doublet”, made of quilted fabric, or underlay with metal plates. Historians D. Paddock and D. Edge explain this by the fact that firearms had obvious successes, but the quality of gunpowder was still quite low. Therefore, a shot from the musket was effective at a distance of no more than 90 m. The riders' vestment was also appropriate for the weapons of that time.

In medieval Germany, the reiters of Henry VIII were armed with a spear 3,5 meter in length, and, moreover, each was also armed with two pistols with wheel locks. The gun had a fairly solid weight and was about 3 kg, had a half-meter length, the bullet weighed 30 grams, but the range of damage was about 45 m. There were more than two pistols, if you had such an opportunity. And then they shoved them over the tops of their boots and a couple more were tucked into their belts. But science is moving forward and the quality of the powder has improved. Pistols and muskets have become more effective against the old means of protection, already rather obsolete. More sophisticated armor, which came after it was made available to the reitar, was now tested for durability and quality by means of bullets. I checked for the vulnerability of the whole set, especially the helmet.

The armored headset "Eagle", reinforced on the chest with an additional plate, providing additional bulletproofness, was at the time of the Archduke Ferdinad of Tyrol. But such armor, along with its invaluable quality - security, had a big drawback - they were heavy, which, of course, affected the mobility of the warrior.

In parallel, in England, there was a process of bringing the armor to a certain uniform pattern, as there were changes in the organization of the system for the purchase of weapons for the army. According to the law 1558 of the year, now the population was assigned the obligation to arm the army. The value of the contribution depended on the amount of income on an annualized basis. For example, a “gentleman” who had an income of £ 10 or more in an 1000 year was obliged to equip six horses for the army (three of them must be with a harness), and for the rider also armor; 10 horses for light cavalry (with armor and harness). For infantry: 40 conventional armor sets and 40 lightweight, Germanic pattern: 40 peak, 30 bows (for each 24 arrows); 30 light iron helmets, 20 halberds or bill-type copies; 20 arquebus; and twenty morion type helmets. The rest bought weapons on their income. Therefore, master gunsmiths began to massively forge sets of identical armor. This led to the “flow production” of vestments and greatly facilitated their release. It is curious that it was strictly forbidden to take all these weapons to other states.

The heavily armed cavalry wore a cuirass, a girdle to the middle of the thigh, the arms were fully protected, and the helmet Morion had a comb and metal shoulder pads, which were tied with laces under the chin. They were armed with a heavy spear without a shield and a sword. The lightly-armed cavalry wore a chainmail shirt and the same Morion, and there were very tall cavalry boots made of thick leather on their feet, the same as those of heavy cavalry. They were armed with a sword and light spear. In Norwich, light cavalry drove two pistols in holsters near the saddle in 1584. For protection they used a brigandine or a Jacques jacket with a lining of horizontal metal plates.

Irish pikemen were protected by cuirass, their arms were completely covered, the head was covered with Morion with a crest, they did not wear legguards. On arms was a long "Arab peak" (about 6 m long), like, a heavy sword and a short dagger.

Ctrl Enter
Noticed oshЫbku Highlight text and press. Ctrl + Enter
We are
Outfit and armament of the English army at the end of the 16th – first half of the 17th century (part 2)Pirates of the West Indies and the Indian Ocean of the second half of the XVII - early XVIII centuries
Military Reviewin Yandex News
Military Reviewin Google News
26 comments
Information
Dear reader, to leave comments on the publication, you must to register.