From a spear to a pistol. The evolution of horse soldiers from 1550 to 1600 year

January 12 2016
154
The transition from the rule of knights in forged armor, sitting astride powerful and in the same way “armored” horses, to relatively light cavalry, armed with pistols and swords, occurred in less than a century. Recall the Hundred Years War. It began in the era of "combined chain-plate armor", and ended in the era of "white metal armor", but it took a whole century. Why? Because the main strike force at that time was a spear and a sword, but the bow and crossbow, with all their destructive power, was auxiliary weapons. Moreover, in Europe, even riding archers could not shoot from a horse, because it was believed that they could not engage in such a noble cause, sitting on a noble animal! Tooth-doers, on the contrary, in order to snatch a tooth out, knight mounted a horse in order to at least approach this “their nobility” in such a manner! 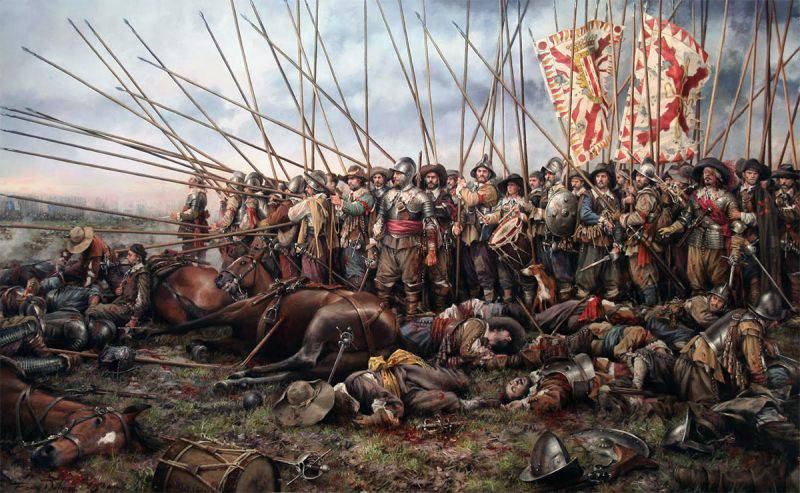 Pikemen in the Battle of Rocroix in 1643. Painting by Sebastian Renks.

The decree of the French king Charles VII created the cavalry from the "fully armored nobles" and the noble servants, devoid of shields, since they were no longer needed - the armor reached its perfection. In the battle of Fornovo in 1495, it was these horsemen who scattered the Italians as pins, and in Ravenna in 1512, the French knights broke through the ranks of the German landsknechts, proving that they were almost invulnerable.

But this army demanded an incredibly large amount of money and only the French crown was able to contain it. There were attempts by the Duke of Burgundy from the Habsburg dynasty to copy these French companies of gendarmes, but in fact they were not crowned with success. Yes, the riders were there, but they were few in number. When Henry VIII of England invaded France in 1513, he with great difficulty armed the necessary number of men, and even then they had to wear only half armor or “three-quarter armor” and ride unarmored horses.

This paradigm changed in the middle of 1540-ies with the advent of a new invention in Germany: a pistol with a wheel lock. And very soon the riders begin to use such pistols, since it was for them that they were very comfortable. So during the siege of Szekesfehervar in Hungary in 1543, these pistols were already used in battle. The following year, at the disposal of the German Emperor Charles V, a whole division of riders with pistols appeared. Interestingly, Henry VIII in the same year complained that the German cavalry he had hired was not really heavy cavalry, but only cavalry pistols. So not so he was a seer, although he loved various military marvels. 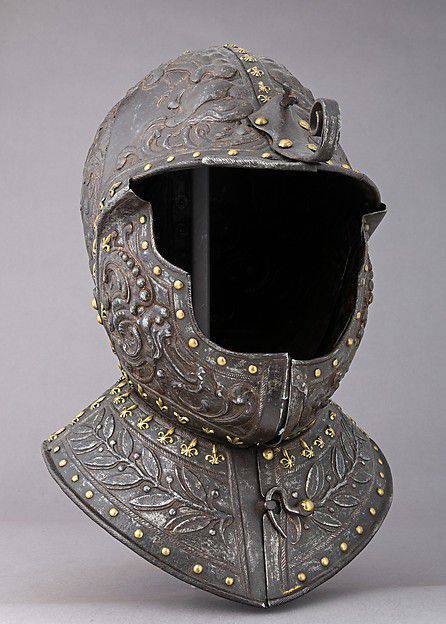 Already in 1550, the German heavy cavalry almost completely abandoned the spear in favor of a pair or more wheel guns. Moreover, they continued to be considered heavy cavalry, as they wore full armor and "three-fourths armor", but already used pistols as the main offensive weapon. Armored horses were immediately a thing of the past, and thus, in 1560, the German horse for heavy cavalry was already much lighter than it was only thirty years ago. What is the benefit? Yes, very simple - less had to spend on fodder, and the effectiveness of such cavalry in battle did not suffer, but, on the contrary, increased!

Another reason was the appearance at the end of the 1540-s muskets weighing from 20 pounds or more and caliber to 20-mm. The lead bullet of such a musket could penetrate any armor, therefore the sense in it became less and less. As a result, the French and Italians began to hire Albanian stradiot; the Germans are Hungarians; the Spaniards used their own light horsemen — ginet, armed with a shield and spear (but also a pistol!); well, and in England a whole system was created, in accordance with which riders armed themselves in proportion to their income! 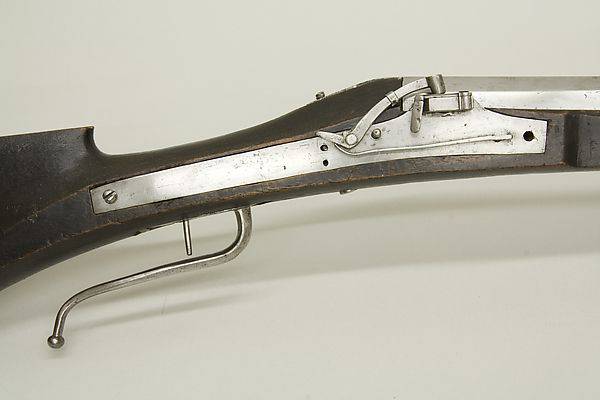 The lock to this musket.

All this cavalry was cheap, mobile, prone to looting and not too reliable, but ... they put up with it. Why? Yes, because in the event, any such rider could send a dear and “correct” nobleman in expensive armor and on an expensive horse to the next world with a shot at an emphasis! 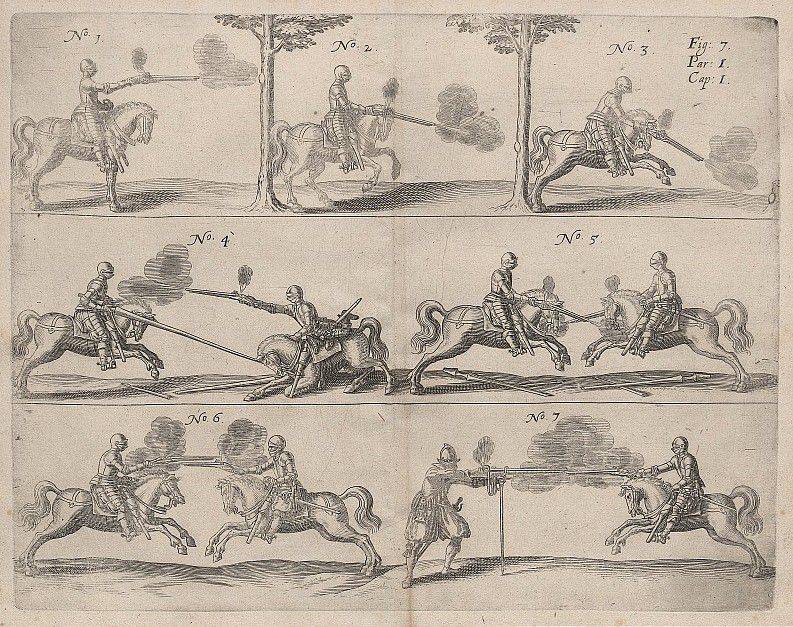 German engraving of the early 17th century explaining the principles of the use of firearms by reiters in battle.

From the beginning of the French religious wars in 1562, France also began the transition from the domination of the old heavy cavalry to the light one. Initially, the so-called ordonance companies in the state consisted of 600 riders in the 100 "copies", in turn, divided into dozens of 10. In practice, a company could have from 30-ti to 110-ti "copies" in its composition, that is, the actual number was not always equal to the regular number. The “spear” consisted of six people: a gendarme (“armed man”) in heavy armor who was not necessarily a knight, a squire called the veil, then three gunners (they could be archers and crossbowmen) and a page for services. According to other shooters there were two people, and the sixth in the “spear” was the servant. Also in the company was his headquarters, in which the chief was the captain, lieutenant (was the deputy captain), and besides them there were two more standard-bearers and quartermaster. Ordinance companies in the army of Charles the Bold differed only in that they also included infantry.

But here in Germany began the so-called Schmalkalden war between Catholics and Protestants, and in the course of it new riders appeared who used both new weapons and new tactics - “black riders”, raiders or pistols. They differed from modern cuirassiers by the fact that the main thing for them was the firearm, and not the traditional melee weapon. Having with them several heavy large-caliber pistols, often almost one meter in length, they used them in the first place and relied on them. And the sword acted as a reserve weapon "just in case."

The cuirassiers usually gave a volley of pistols at the infantry and cut into its ranks, while the reitars methodically shot the infantry until it escaped from the battlefield. The Reiters also never dismounted, but shot directly from their horse, that is, in fact, became the European equivalent of Oriental horse archers! 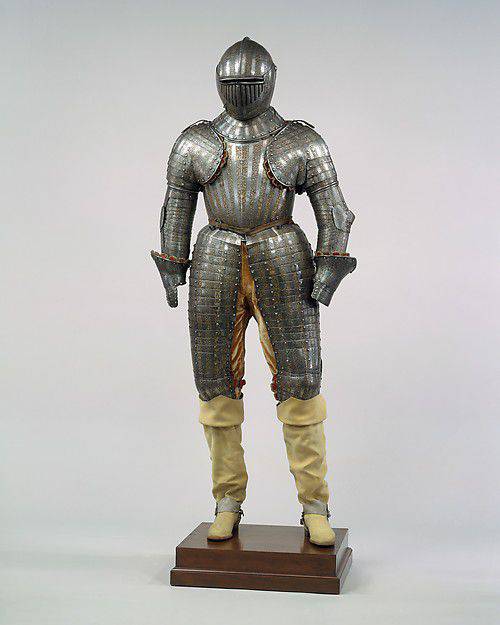 The debate about what is best, a spear or a pistol, has continued for some time, but the practice has clearly made its choice in favor of the second. Now the metal helmet helmet and breastplate became the traditional weapon of the majority of riders, but further various riders were armed according to circumstances. Cuirassiers, more than others, continued to resemble knights in that they had closed helmets and knee-length legguards, and below were tall boots made of durable leather. The dragoons were armed with carbines, had a minimum of armor, but then a carbine, from which it was possible to shoot, both dismounted and from the saddle. Catch up with them after they fired a volley, the same, say, raters could not! 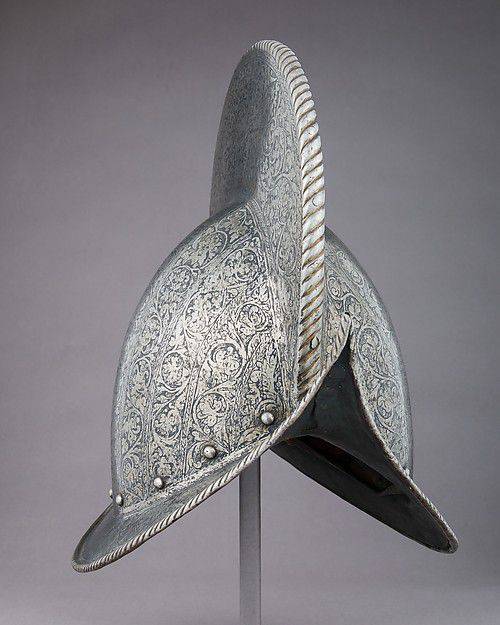 French helmet Morion 1575 g. Weight 1773 g. Typically, such helmets were worn by infantrymen, but horsemen, too, did not disdain them. Metropolitan Museum, New York.

Cuirassiers usually had two pistols. Light spearmen are two-one, but Reiters - three, five, six, which allowed them to conduct a long fire battle with the enemy. Two were worn in holsters by the saddle, two behind the boots of their boots and one or two behind the belt!

Since their opponents also wore armor, so that even the infantry had helmets and cuirass, the Reiters tried to shoot their weapons at close range. In order to get close to the enemy, they usually used lynx, but under favorable conditions they could also gallop, which, however, depended on the terrain, so that a quick jump would not hurt to keep the line. Since the pistols were being reloaded very slowly, the main tactical method in the infantry was also a karakol formation — among the Reiters — a construction in which the first row of soldiers fired immediately turned around and left, taking the place of the last row, while the second row, which became the first gave the next volley. Usually reiters were built in Karakol around 20 riders on the front and depth in 10 - 15 ranks. The first line of riders immediately after the volley was divided into two groups: one jumped to the left and the other to the right, and they both met in the rear, where they reloaded their pistols and again prepared for the attack.

Although this tactic seems simple, in fact it demanded excellent training, so that the ranks of riders in battle did not mix, and did not turn into an uncontrollable crowd. In addition, it was required to shoot volleys, which also needed to be able and was achieved not immediately. In addition, a certain psychological attitude was required to fight in this way. 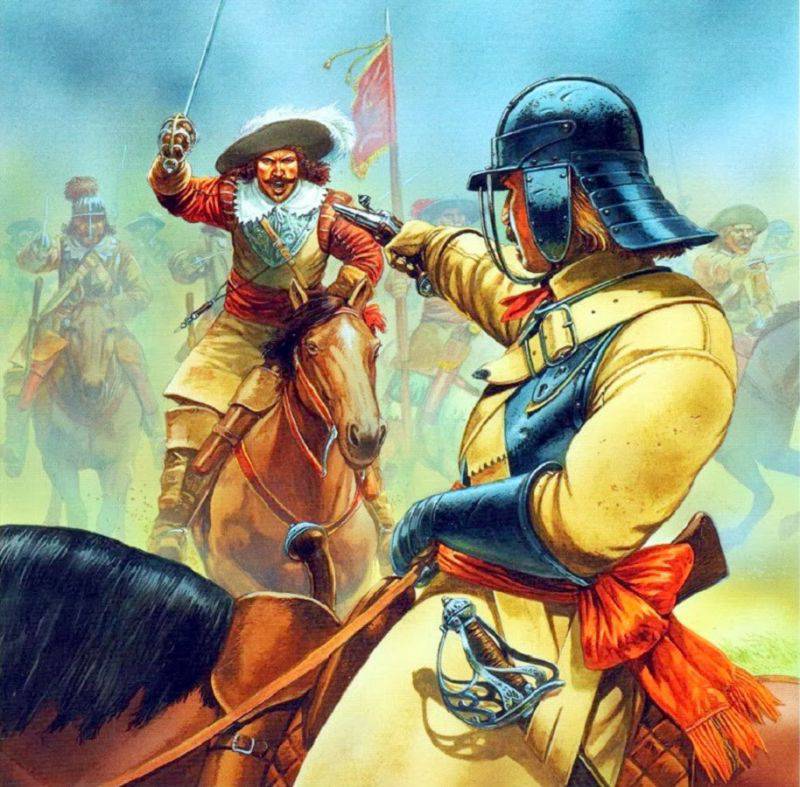 It was not without reason that contemporaries wrote that “Large pistols made the battle at close range so dangerous that everyone wants it to end as soon as possible, and one would no longer risk it.” That is, it is obvious that at a certain percentage of losses, the infantrymen and riders attacked by pistols did not risk defending themselves to the end, and everyone threw and retreated to save their lives! But the pistoliers themselves were not too eager to die under a hail of bullets, and if they suffered heavy losses from the very beginning, they almost immediately retreated.

The Spaniards held their spears the longest in Europe, but they had to be very bad when they began to fight in Holland against hired cavalry from the British, Germans and Scots (well, the Dutch themselves, of course!) Armed with cavalry pistols. And only Philip III ordered to cancel spears in the early years of the XVII century.

It can be said that right up to the middle of the XVII century it was precisely the pistol guns that were in Europe a kind of “doomsday weapon”, and their numbers and skillful use guaranteed victory. This was the reason why the reiter cavalry after the Time of Troubles was instituted in Russia. Without it, to achieve victory in the battles of that time was just very hard! 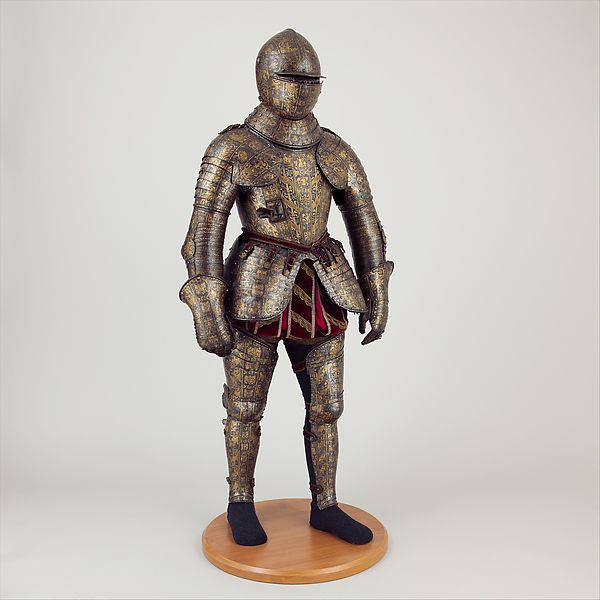 However, over time, the pistols were abandoned. Why? Yes, simply because they also wore heavy armor, and this was too expensive for their invincibility. Well, of course, horses. To breed horses for such cavalry and to feed them was not easy and expensive, especially in peacetime.

And when the Thirty Years War in Europe ended, and the Peace of Westphalia came, the armies began to resolutely "disarm", dropping their armor and abandoning heavy horses. Under these conditions, the cuirassier cavalry turned out to be “more versatile,” because it survived, but the slightly more specialized, but incomparably more expensive pistols disappeared into oblivion. 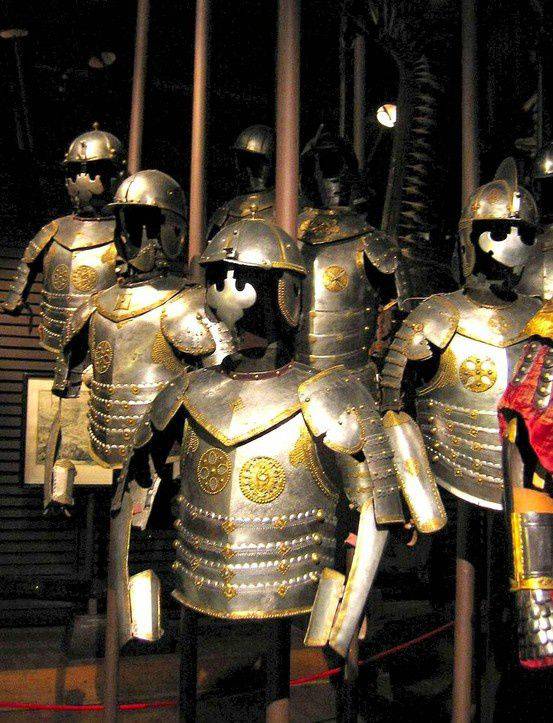 The longest in the version of the "winged hussars" they lasted in Poland, which at that time continued to fight the Turks. The Poles needed a “weapon” to break through the ranks of the Janissaries, and she got it and used it, but in the end, too, refused these spectacular, effective, but too expensive riders!