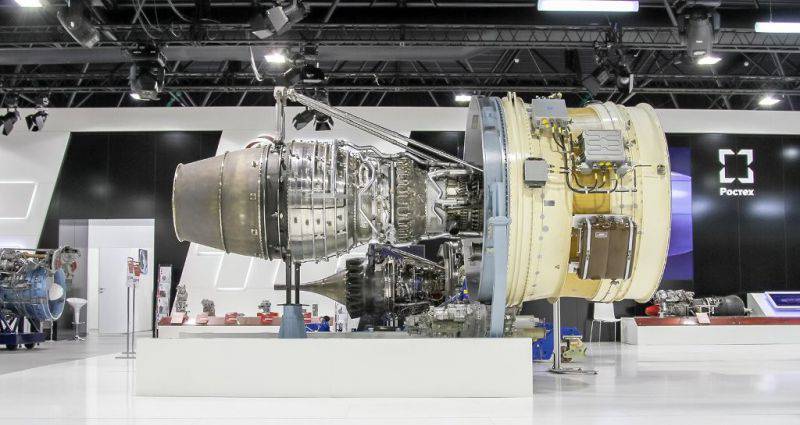 Fighting stereotypes - the author has already devoted a whole series of articles to this topic. The time has come to overcome another stereotype, which, as a result, very few people will refuse. So firmly he entered our lives. With him comfortable and familiar. It is good to parasitize and be considered an "expert." Who would just refuse such a thing?

Meanwhile, I propose to plunge into history, not so distant - the history of China, which has become a world standard. He is the measure of how to do it. Why? Yes, because he achieved a result that hit the whole world. Meanwhile, the mass of experts in the field of economics gives Russia (and we will talk about it in the article) a lot of space stupidity advice.

Why nonsense? Yes, because the economy never tolerates haste and inconsistency. And the inconsistency of advisers is so obvious that their "deep" knowledge gives me doubts.

Now in Russia there is a perception that the country's leadership absolutely in vain planted it on a raw needle and that, in the end, this will result in backwardness for it. On the contrary, they advise to invest in advanced technologies (mechanical engineering, electronics, IT, etc.) and on this build a country development strategy.

All this was evident in the 1980-90-s, when China began to build its economy of the future. But he did not begin with this.

Few people remember that the first thing that the PRC leadership was concerned about was agriculture. The goal was to feed the country and make it independent from the supply of food from outside. It is agriculture that has always been China’s top priority, beginning with the end of the 1970, when farmers were allowed to work under market conditions with Chinese characteristics.

Meeting basic human needs is the basis of independence. If a country depends on food supply, then no nanoproduct and super-electronics will make it strong and influential. The example of Japan, which essentially remained a semi-colony of the United States, is so significant that it would be worth studying it in Russian schools.

At the same time, it should be understood that Japan is rich and prosperous only because the USA needs a strong and loyal ally in the region, and it is possible to smash the economy of an island state with one stroke of the pen of the American president. Those who set Japan as an example for Russia are stubbornly trying to circumvent this issue, and it is in fact the most important.

Russia, follow the path of Japan, it will be exactly the same dependent country. Japan did not become rich not against the will of the owner, but because of his will, and it’s foolish and ... unworthy for Russia to hope for this favor.
By the way, the first investments of the government and foreigners in China went into the chemical industry, namely, in the production of fertilizers, as a result of which, already in 1990, China became their largest producer.

Basic industries as the foundation of any industry

The second thing that preoccupied China’s leadership was the creation of basic industries: energy, metallurgy, chemical production (the part that does not concern fertilizers).


In the network there is a perception that the leadership of China in 1990-e was engaged in the development of light industry. This stereotype is very tenacious, but incorrect. Chinese down jackets were sewn in thousands of rural manufactories and cooperatives. But this was never the goal or the result of the actions of the PRC leadership. At that time, it was engaged in completely different matters. And it is not by chance that, according to expert estimates, up to the millennium slice, up to 30% of China's light industry was in the shadow, that is, it was not controlled at all by the central government.
By the way, Beijing did not invent anything new here. China adopted the experience of the USSR, namely, Stalin’s industrialization, and simply adapted it to its own conditions.

The PRC leadership was well aware that not down jackets and pantaloons could do a real economic miracle, but the basic industries that the rest of the industry relies on. As basic industries always rely on energy.

The industrial pyramid has not yet been able to cancel any country in the world. Britain XIX-XX centuries. relied on Cardiff coal. The USA in the 20th century - for cheap Texas oil, the economic power of the USSR during Stalin's times on Donbass coal and Baku oil (then on oil and gas from other regions of the country, Kuzbass and Ekibastuz coal).

The main energy heart of China has become coal. Moreover, we must understand that the industrialization of China began not in 1980-x, but much earlier. The growth of coal production during the reign of the Chinese Communist Party is simply colossal and has no analogs in history:

Coal is needed not by itself, but in order to generate electricity. It is electricity that is the blood of modern industry, and I am very amused by “experts” who recommend Russia to work hard to reduce energy consumption and prove their case with the figures of the “energy efficiency” of the European economy. One would like to ask these gentlemen: is Russia in the situation of Europe to take an example from it, or is it in the situation of China, but a decade ago?

Meanwhile, the growth in power generation is also astounding:

And already in 2014, electricity production in China amounted to 6 500 billion kWh.

And this is understandable. Aluminum production by energy efficiency compared to drawing pictures or the production of rare varieties of wine is meaningless. The Boguchanskaya hydropower plant on the Angara, for example, will produce up to 3 GW of electricity, which, in the main, will be consumed by the Boguchansky aluminum plant built in 2015, the raw materials for which will be carried from everywhere. And how to make a plane without aluminum, and to make aluminum - without energy?
By the way, in the first decade of the 21st century, China increased the production of winged metal by a factor of four, which laid the foundation for the development of many branches of engineering. Strange, why "experts" do not admire about this?

Everyone "knows" that China is intensively developing electronics and mechanical engineering. They write about it, they admire it, they set it as an example, and, meanwhile, China is great not with it, but with steelmaking. And they have become very cheap, which compensates for wage growth: 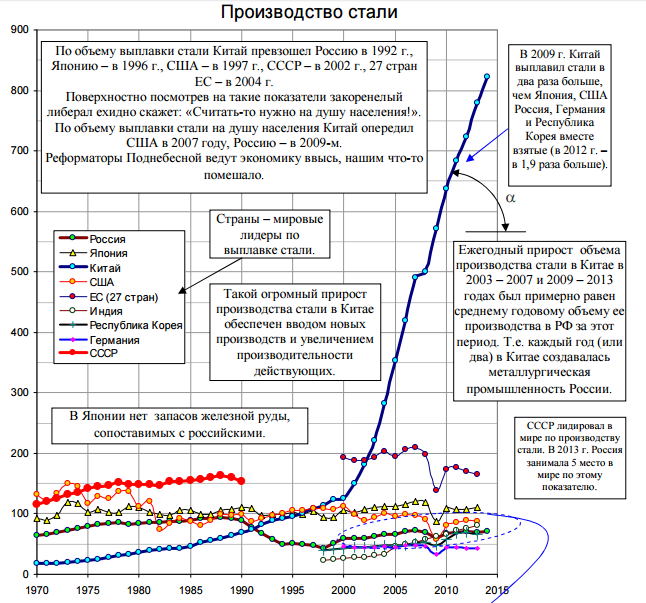 As we see, growth began to accelerate slowly, but surely from the very beginning of the reforms of Deng Xiaoping. And in 1990-x laid the foundation for future growth. The fact is that in China steel smelting has traditionally been produced by thousands of small enterprises scattered throughout the country. It was very inefficient. Already in the beginning of 2000-x created the prerequisites for the accelerated growth of the industry, on the basis of new giants, which replaced the outdated production.

In 2005-07 in China, obsolete capacities twice as large as those that Ukraine had at the same time were closed.
By the way, in 2012, almost 10% of China-made steel was exported.

We will look at the path of Russia in the 21st century in the second part of the article. For the time being, draw your own conclusions, and we will proceed to consider the third stage of the Chinese economic miracle.

Chinese cars, Chinese electronics, Chinese ..., Chinese ... As is already customary. But to all this miracle of all 10-15 years. Back in the recent year 2000, a lot of jokes circulated about this. As the house stands on the foundation, so the Chinese industries with high added value stand firmly on the achievements of Chinese miners, power engineers, metallurgists. Moreover, the leadership of China is still most concerned not with selling its goods abroad, but with access to resources. The Chinese economy has overtaken the growth of the domestic raw material base, and this is one of the main risks of the Chinese economy.

In order not to be unfounded, we give statistics.

And so everywhere. In world shipbuilding, from 2010 to 2015, China’s share increased from 20% to 40% in a year. The overwhelming number of leaders of the IT-market and the electronics market in general emerged after 2000.

Thus, the spasmodic growth of mechanical engineering began in the first years of the new millennium and reached a peak in 10-15 years.
China has a lot to learn, but it also has mistakes that need to be avoided by copying its path of success. We will discuss this in the second part of the article when we raise the issue of the Russian economy of the 21st century. It follows its own, but very similar, path of industrial growth, under which an energy, infrastructure and raw material foundation is being laid right now.

Ctrl Enter
Noticed oshЫbku Highlight text and press. Ctrl + Enter
We are
About Stalin and KhrushchevWhat you didn't want to know about England
157 comments
Information
Dear reader, to leave comments on the publication, you must to register.