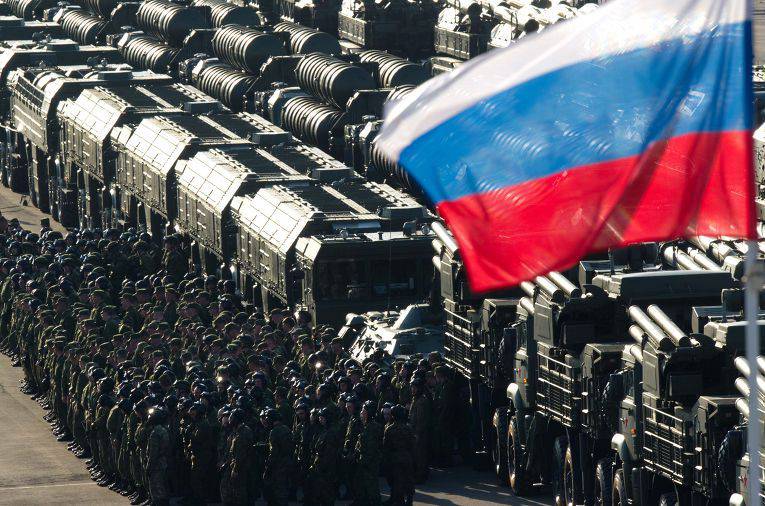 The media is now focused on the war with the "Islamic State", but world military giants are preparing their armies for conflict on an incomparably larger scale.

The current clash with ISIL, previous Western operations in Afghanistan and Iraq, or the Russian invasion of Georgia and Ukraine - this is only an anticipation of what the architects of the “great war” are preparing for. Can it break out? Similarly, in none of those places that are known to us from the latest press reports. It will not be Syria, Iraq or Palestine, where local fires smolder, from time to time requiring military intervention, and not a war for life and death. Faced in the "great war" can now (or be able in the near future) only a few states that set the direction of military world initiatives. This is primarily about the United States or NATO as a whole, China, Russia and India. Their aspirations are aimed in one direction: to consolidate or acquire the ability to wage war on the scale of the entire globe or, at least, the eastern hemisphere (Russians, Chinese, Hindus).

The United States, thanks to its safe position between the two oceans, is guided by the expeditionary nature of its army, the other three powers - by actions in reliance on its territory. If a global scale conflict breaks out, not every corner of the world will be equally threatened by fire. The theater of the “great war” will become if the USA and China collide in it, primarily the Pacific Ocean and East Asia; and, if the Alliance clashes with Moscow, the strip between Russia and the NATO states is from the Arctic to the Mediterranean. It should be noted that in the second case Poland will be exactly in the middle of the potential front.

From the air and from the sea

The form of each future “great war” is set by the United States, although they rather do not initiate it, since it is a state that protects what it has and not the hungry ascending power. America sets and for decades will set the tone for strategy, military technology and the study of new spheres of reality for military purposes. There is no other state in the world that can be compared in this respect with America. China is only an imitator, although this does not at all mean that it cannot soon become very dangerous. The military preparations of Americans is a derivative of the three fundamental points of the US strategic doctrine, which has remained unchanged since the beginning of the 19th century and is only complemented by new areas emerging with the development of technology. First, the Americans are trying to prevent the development of forces in the American continents that will be able to threaten the United States on land.

Second, the Americans want to dominate the North Atlantic and the North Pacific, so as not to allow the enemy to approach its coast. Thirdly, they do not want to allow one power to dominate in Eurasia, because in general it exceeds the potential of the United States and could defeat them. The second point is the most dynamic. Washington derived from it the doctrine of domination on the world's oceans inherited from the British (it is better to rule over all the world's waters than just over their northern fragment), in the air and in space, as well as in cyberspace. Each of these areas can be a threat to Americans, therefore, they need to be controlled.

The United States consistently implements the above points, as a result, the conflict on American territory has become impossible, and the likelihood of an air attack is severely limited, so that America will lead the future “great war” far from its shores. In recent years, this has been reflected in the concept of AirSea Battle - an air-sea collision. This leading American concept has recently changed its name, but we will remain at the old one. ASB is a response to the threat from China. The strategy is both defensive and offensive in nature and will be deployed in several areas: in the air, at sea, on land, in space and cyberspace. Simply put, we are talking about protecting our bases and transport routes in Asia and the Pacific, as well as defeating the enemy’s defenses.

China has been developing attacks in the past ten years to defeat US Pacific bases and strike forces fleet (ballistic and cruise missiles, planes invisible to radar, over-the-horizon radar stations). The People’s Liberation Army of China wants to be able to break through the so-called first row of islands, that is, American military installations and defense systems of US allies in the western Pacific (Philippines, Taiwan, Okinawa, the Japanese archipelago). The Beijing authorities are also thinking about breaking through the second row of islands, that is, the American security belt stretching from Japan to Papua New Guinea (Mariana Islands with a large air and sea base in Guam, Bonin Islands, Iwo Jima, sometimes Midway Island is added to this) . Further - already the territory of the USA: Hawaii and the west coast.

The purpose of the Americans in the framework of the ASB is simple: do not allow China to go beyond the first row of islands and smash the American military potential because of this cover. The conflict will begin with simultaneous parallel attacks on computer networks, satellites, radar systems and guidance, to blind and stun the enemy. Then there will be attack aircraft, ballistic and cruise missiles to destroy the military infrastructure. If it comes to the use of nuclear weapons, the United States will surely win the war. But if this is only a conventional conflict, the situation will be complicated. In the first phase of the collision can win more technically advanced Americans, but the outcome of the second, that is, a tough confrontation with the participation of aircraft, bombs, ships and soldiers, does not look obvious. As shown by computer models created by order of the US Department of Defense, Chinese aircraft and rockets, although they are not so technologically perfect, can break through the American defense system thanks to a large number of attack units. Four fifths of them will, however, be destroyed, but the remaining ones will be enough to cause great destruction in the first and even second row of islands, as well as in the Third (base in San Diego) and the Seventh (Yokohama) US fleets operating in the Pacific Ocean.

Both sides have sufficient potential for a long-lasting conflict of a total nature and, most importantly, they are preparing for it. Just in case.

In the collision of NATO with Russia, the situation will be exactly the opposite compared with China. If this is a nuclear conflict, Moscow will have many chances if it doesn’t win, but to achieve a decent world, as it has enough nuclear potential to cause destruction on an incredible scale in Europe and even the United States. If the conflict is conventional, Russia has no chance.

How Moscow sees and plans a “great war” is demonstrated by the regular “West” maneuvers. The Russian and Belarusian armies seem to be working off anti-terrorist operations on them, but in fact the army is being prepared for a conventional war with the Alliance.

If in AirSea Battle, marine and aviation forces, then Russia relies on the ground forces: tank and mechanized. It is they who will take on the main burden of the conflict, and aviation and missile forces will play a supporting role. Since 2013, the Russians have been practicing the transfer of a large number of military personnel by air and rail to ensure a significant concentration of the military in a certain segment and to hit the enemy as soon as possible before he mobilizes his forces for effective defense. So at the beginning of the “great war” we can expect a swift offensive on land in Poland, which will enter our country as a wedge before we receive reinforcements. If a “great war” breaks out between Russia and NATO, the probability of using nuclear weapons in it will be much higher than in the event of a US clash with China. After all, Russian leaders are well aware that their conventional troops are inferior to the Western.

In order to level this imbalance, they provide for the use of tactical nuclear warheads. This is the doctrine of the use of nuclear weapons on a limited scale without the exchange of destructive strikes between the powers using its strategic variety. Unfortunately, this conflict will unfold in the first place on Polish territory, and it is our lands and the troops on them that will become the main target of nuclear strikes. If the Russians attack with full force, our army will not be able to cope with them, in turn, the European members of NATO do not have enough potential and political will to immediately take action. So the United States remains. Now the Americans in Europe have only two brigades of ground forces on a permanent basis and one on rotational, so that in the event of an invasion they will have to deploy military across the Atlantic Ocean.

In such a situation it is necessary to ensure dominance in the air. And if Russia hits the ground forces, NATO - aviation and missiles. And all this will happen over our heads, sowing destruction and death.

Who else wants to participate in the great war?

The “Great War” can also take place between China and India or Russia and China. In both cases, the likelihood of the use of nuclear weapons. It should be noted, however, that although there are quite a few disputes between Beijing and Delhi or Beijing and Moscow, including territorial, geography has hindered full-scale conflicts. China is separated from India by the Himalayas and the Karakorum Range, and from the populated center of Russia by Siberia.

The "Great War" may break out, but it is not predetermined. Now the probability that the fuse will be set on fire is low, but the pace of world events has noticeably accelerated. The differences in the interests of the major players are becoming more pronounced, and the ambitions of the ascending powers, especially China and Russia, are articulated more clearly. Territorial disputes (Crimea, Donbass, Arctic, islands in the South China Sea), which were frozen a decade ago, are intensifying in areas of potential conflicts. So far this is just a quiet rumbling, but the armies of the main powers are already ready for a world conflict, and then it will turn into a roar.

Ctrl Enter
Noticed oshЫbku Highlight text and press. Ctrl + Enter
We are
Peshmerga: Kurds as a barrier to religious extremism in the Middle EastThis is not computer shooters, or the war in Afghanistan as it is.
Military Reviewin Yandex News
Military Reviewin Google News
340 comments
Information
Dear reader, to leave comments on the publication, you must sign in.