January 11 2016
140
The experience of fighting in Syria, as well as the failure of the IDF in actions against Hezbollah, raises the question of the effectiveness of existing armored vehicles (BTT) in urban combat and when the enemy uses elements of "gallery defense" (defense using underground communications). 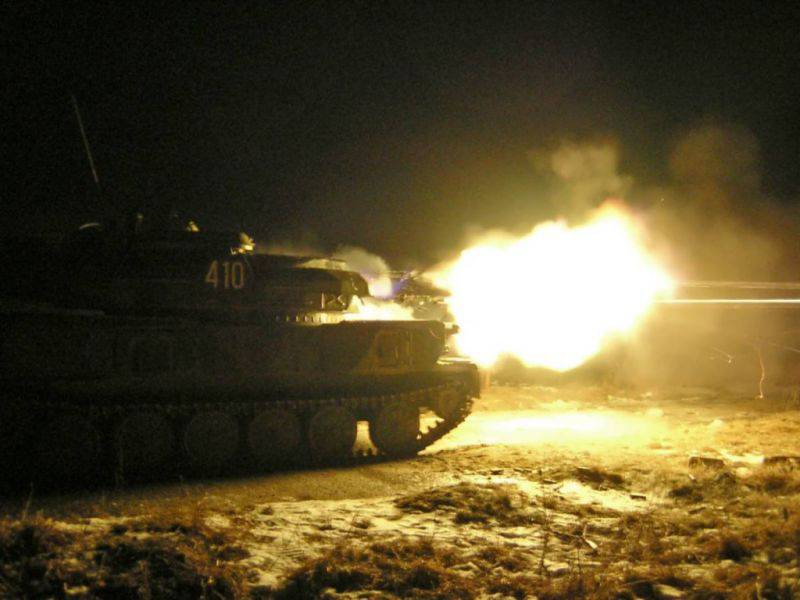 Mutually exclusive tasks arise before the BTT, which the same CAA has to solve, bringing outdated ZNS 23-4 Shilka and 2С3 SAU Acacia of the caliber 152 mm to the direct lead. The main battle tank with the caliber of 100-122 mm is unable to repulse the enemy’s massive counter-attack on a short distance, to riddle the reinforced concrete structure in which the sniper or the ATGM calculation was noticed, or to demolish this building with a single projectile.

The main battle tank itself turns out to be prey in urban combat, its security is insufficient. But even worse is the security of “Shilka” and “Acacia”. What can we say about the BMP and BTR, which were completely unable to support the infantry in such conditions!

The vulnerability of armored personnel carriers can be leveled tactically by launching infantry in front of it. Here, the BTT will only have to suppress the identified firing points, being outside the zone of destruction of the enemy’s anti-tank weapons. But it must be an exceptionally well-prepared and motivated infantry, insensitive to their own losses. In addition, modern anti-tank weapons provide such a defeat distance that the infantry will actually detach from the armored personnel carrier with corresponding consequences.

Another solution to the problem is to create an infantry support combat vehicle. Such a machine in stories there were already Wehrmacht assault guns until they turned into a means of combating tanks.

What requirements in modern conditions could be placed on an infantry support combat vehicle?

1. Security at the level of the main battle tank, and preferably higher.

2. The presence of low-ballistics gun caliber 152 mm with a high angle of elevation. A smaller caliber does not provide a solution to combat missions in urban combat, does not provide for the rapid destruction of reinforced concrete structures, the destruction of the exit points of galleries to the surface, dots. Here you need a high-explosive projectile of high power, the ability to hit the target with both flat and hanging fire.

3. Combining the barrel 152-mm guns of low ballistics with launcher ATGM. Theoretically, such a combination looks attractive, but in practice, the American Sheridan / Shileila program has failed. It is necessary to study the reasons for this failure and find out whether the old flaws of the system are eliminated at a new technological level.

4. The presence of a small-caliber automatic gun, paired with the main one, performing the role of sighting and insuring when the enemy suddenly appears, when the main gun is discharged. 30-mm gun 2А42 is quite suitable for these purposes: it is able to penetrate the standard reinforced concrete panel and hit the sniper, calculate the ATGM, quickly destroy enemy vehicle technology, hit lightly armored objects, such as BTR, BMP. It lacks only remotely activated ammunition to combat the infantry.

5. Preferably the presence of AGS in a remotely controlled installation, as an antisurge agent.

6. It is desirable to have a remote-controlled paired installation of large-caliber machine guns, caliber 12,7-14,5 mm as an anti-assault means and means of dealing with the enemy's UAV and aircraft.

In principle, an infantry combat support vehicle can be made on the basis of obsolete main tanks, paying special attention to the means of dynamic protection and jamming.

It remains an open question about how generally such a machine fits into modern concepts of BTT and its use. But on the other hand, maybe it is not worth creating a combat tank support vehicle. Perhaps, her role with success will be played by a different machine, and more demanded in a real battle?

Ctrl Enter
Noticed oshЫbku Highlight text and press. Ctrl + Enter
We are
Family BTR-60 / 70 / 80 in combatIs the "old" well forgotten to become the "new"? Part-2. At the call of honor and duty
140 comments
Information
Dear reader, to leave comments on the publication, you must to register.