Defense Ministry: Russian aviation continues to destroy the infrastructure of terrorists in Syria.

December 31 2015
31
The 3 month has passed since the anti-terrorist operation in Russia began in Syria, the intensity of the strikes remains high: only in the last 2 days, have Russian aircraft made 121 combat missions, striking 424 targets of the IG (DAISH) group, the representative said Ministry of Defence Igor Konashenkov. 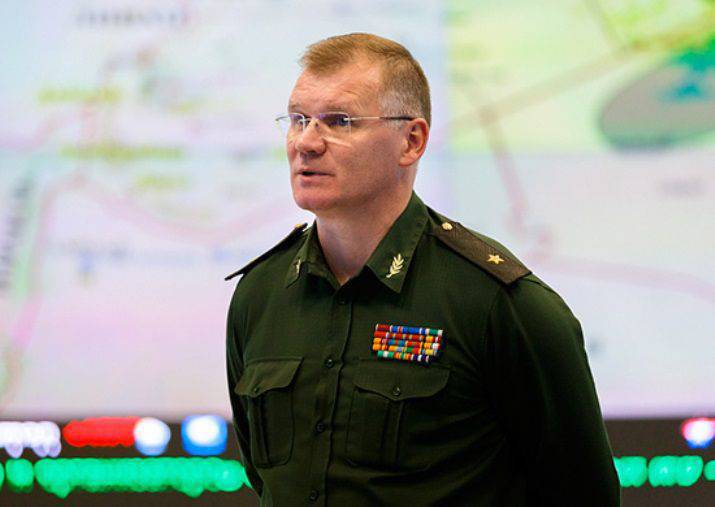 "Over the past two days, from December 28, the airplanes of the Russian Aerospace Forces in the Syrian Arab Republic carried out 121 combat sorties at 424 targets in the provinces of Aleppo, Idlib, Lattakia, Hama, Homs, Damascus, Dar'a, Raqqa and Deir ez-Zor ", - said Konashenkov on Wednesday.

“In the vicinity of the city of Mkhin, Homs province, a Su-34 bomber was hit at a large base of ISIS militants. Direct hits destroyed hangar with military equipment, as well as storage facilities with weapons, ammunition and property of terrorists. 5 off-road vehicles with large-caliber machine guns, one infantry fighting vehicle and a 4 truck loaded with ammunition were destroyed.

In the area of ​​Shuarget-Ar-Arz, Aleppo Province, the Su-25 attack ground destroyed the stronghold of terrorists. As a result of direct hits, a tank and an 3 off-road vehicle with heavy armament installed were destroyed.

In the area of ​​Lakhaya, Hama province, the Su-25 attack aircraft destroyed 2 artillery guns and a field depot with shells nearby.

According to him, "the command of the Russian air group continues to receive information about the objects of ISIL and other terrorist groups in Syria from representatives of patriotic opposition forces."

“So, on Monday, representatives of one of the Syrian opposition detachments operating in the north-east of the country reported on the planned meeting of ISIS field commanders in the vicinity of the city of Rakka.

Within two days of this area, we organized round-the-clock surveillance from the air. After confirming the information about the arrival of the leaders of the militants at the gathering place, the Su-34 was applied to the building in which the meeting was held aviation hit. As a result of a direct hit by a corrected air bomb, the building with all its contents was destroyed, ”Konashenkov said.

According to another opposition group, the ammunition depot of the Jibhat al Nusra group in the province of Idlib was destroyed.

“Through the channels of the information center in Baghdad, we received information with the coordinates of the Osa anti-aircraft missile system, previously captured from Syrian government forces, transferred to the DAMASKA area.

By means of reconnaissance, a camouflaged reinforced concrete shelter was found in which the Osa complex was located. For its destruction was used bomber Su-34. As a result of direct hits by the BETAB-500 bomb, the structure with all its contents was destroyed, ”said the representative of the Ministry of Defense.

In addition, according to him, "a large number of oil production, storage and transportation facilities in the territory controlled by ISIS in Syria are destroyed every day." Over the past 2 of the day, "6's destroyed illegal oilfield sites of terrorists in the provinces of Deir Ez-Zor and Aleppo have been destroyed."

Also in the province of Idlib, a convoy of tank trucks was discovered, moving towards the Turkish border.

“To hit this target, a Su-34 bomber was assigned from the duty force of the Russian aviation. As a result of the bombing, more than 20 packers used by ISIL for smuggling oil supplies to Turkey were destroyed, as well as two jeeps equipped with ZU-23 anti-aircraft guns. ”

“In conclusion, we draw your attention to the next speech of the next State Department representative.

The situation is changing.

Only their speechwriters do not change.

All these impersonal and unsubstantiated statements about the alleged use of Russian aviation on civilian objects in Syria increasingly resemble speeches of visiting hypnotists from the tent.

It comes to the point of absurdity, - serious accusations are voiced with reference to some "authoritative non-governmental organizations." But what are these organizations and for whom they are authoritative, - again the question hung in the air.

And all this is being done against the background of absolute silence about the actions and, most importantly, the results of the bombing of US aircraft in this region.

Although, every day, airplanes and attack drones of the US Air Force make from six to twenty sorties with missile-bombing attacks on ground targets.

Only we all learn about the effectiveness of the use of the US Air Force, when their attacks, in the direct and figurative sense, led to mass casualties, and it is no longer possible to hide or dump such facts on anyone else. ”

Ctrl Enter
Noticed oshЫbku Highlight text and press. Ctrl + Enter
We are
ARMY-2016. Cluster VCS. Part of 2. Space is space!Igor Konashenkov presented new information on the actions of the Russian Aerospace Forces in Syria and called the State Department’s comments on this subject “performance of hypnotists from the big top circus”
Military Reviewin Yandex News
Military Reviewin Google News
31 comment
Information
Dear reader, to leave comments on the publication, you must to register.