December 31 2015
42
The 76-mm regimental cannon of the 1927 model of the year is not as well known today as the famous forty-crib or 76,2-mm ZIS-3 divisional cannon, however, along with them, it fought the entire Great Patriotic War. The regimental gun of the 1927 model of the year (GAU index - 52-П-353) was a 76,2-mm regimental weapon of direct support for infantry and cavalry. This gun was the first model of large-scale artillery equipment, which was created in the Soviet Union. A total of approximately 1928 thousand guns of this type were produced from 1943 to 18 year. They took part in all the military conflicts of the USSR of that period.


Almost all the time the regimental cannons were directly in the combat formations of the infantry or cavalry, directly supporting them in battle by fire and wheels. They were used to suppress enemy firing points and enjoyed the love and respect of ordinary Red Army men and calculations. In the soldiers' vocabulary, these guns were known as "regiments", they were also affectionately called "Bobby." It is worth noting that история This regimental gun began long before the 1927 year, and in 1943, it did not end at all.

At the beginning of the 20th century, the main artillery directorate of the tsarist army realized the necessity of having a light field gun in service, while the term “regimental” in relation to such guns had not yet been used. So in 1914, at the Putilov factory, the 3-inch short gun of the 1913 model of the year was launched (the 3-inch gun of the 1902 model of the year with the barrel length of 30 caliber was meant under the gun length). Constructively, the new weapon was created on the basis of the 76-mm mountain cannon of the 1909 model of the year, which, in turn, was a collapsible body of the Greek system, Colonel Dangliz, mounted on a mountain carriage of Schneider. In the 3-inch gun of the 1913 model of the year, the design of the wheels, wheel chocks, and the barrel were almost entirely taken from the mountain cannon, and the gun carriage was largely preserved. 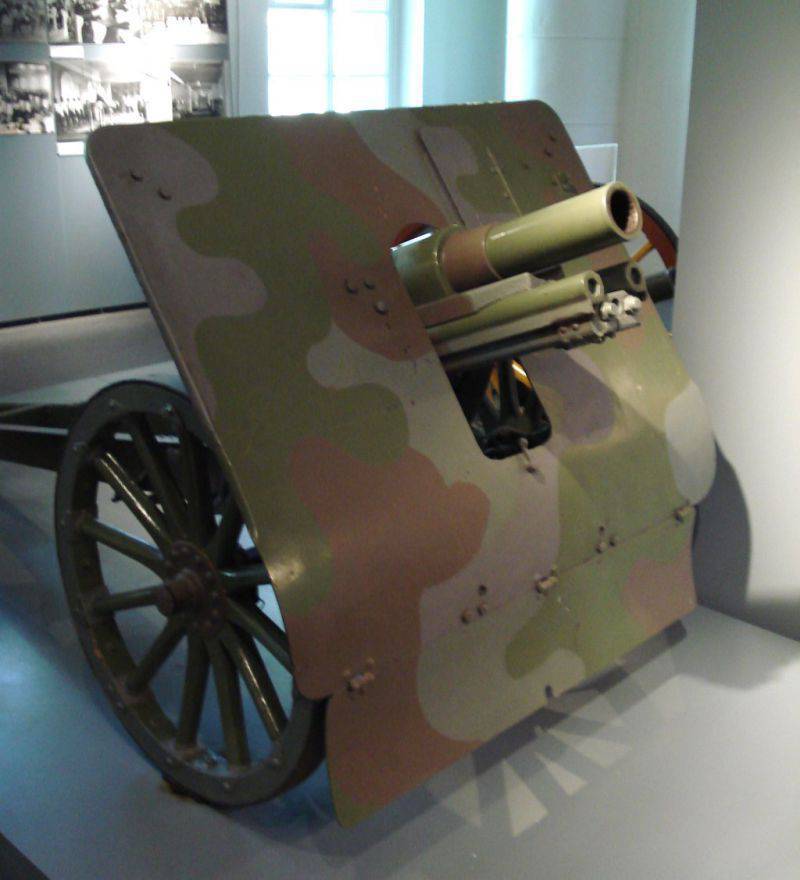 After the end of the First World War and the Civil War, the process of rethinking the military experience gained began, which was expressed in the final design of the concept of the regimental gun. Already in 1924, the military leadership of the Red Army, after numerous discussions, made a decision in principle to develop a regimental cannon in the country. The military came to the conclusion that the 1922-mm gun of the 76 model of the year introduced into the regimental artillery in 1902 was of little use for this purpose. Among its main shortcomings were indicated: the excessive size of the gun, its bulkiness; the inability to roll the gun more than 50 meters by the forces of 6 people; lack of howitzers of the gun (the projectile had a gentle trajectory due to a rather high initial velocity); insufficient level of transportability (six horses were harnessed).

The task for the development of the draft of the new regimental weapon was issued by the Design Bureau of the Artillery and Artillery Trust (OAT), which was headed by S. P. Shukalov. The design of the gun was completed by the end of 1925 of the year, and already at the beginning of 1926, the first prototype was built. His tests were conducted at the Klementyevsky range of the Leningrad Military District and the Research Artillery range, they were held from January to June of the 1927 year. During the tests, a decision was made on the inexpediency of increasing the initial velocity of a projectile over 381 m / s (at higher speeds, the instability of the gun and a large scatter of shells were noted during firing). Also, the military expressed their wishes to increase the maximum angle of elevation of the gun and the maximum speed of the regimental gun.

After the implementation of all necessary improvements at the beginning of 1928, this tool was adopted by the Red Army. In doing so, it received the official name of the 76-mm regimental gun model 1927 of the year. All further work aimed at improving this artillery piece was transferred to ATK - the Artillery Technical Office of the Putilov Works, where it eventually began its mass production. The first serial regimental guns were transferred to the 22 army in December 1928. 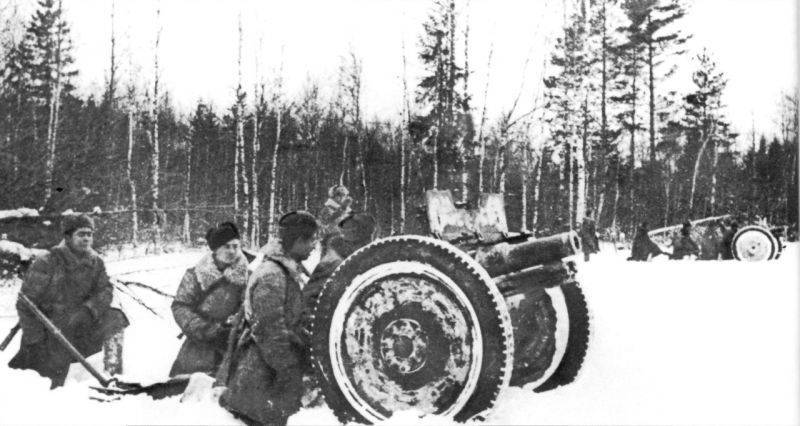 The new regimental gun differed from the 76-mm short gun of the 1913 model of the year as follows: elongated chamber (334 mm instead of 203 mm); new combat axle; the presence of suspension (4-x screw springs); altered frontal part and the machine tool spatulas; new carriage wheel; changes in the shield and lifting mechanism; enhanced trunk part. After adopting the work to improve the gun did not stop. From 1929 to 1934, this regimental gun was subject to constant refinement.

The aim of the modifications carried out was to improve the manufacturability of the tool and simplify its design, as well as to improve the performance characteristics of the gun. Works on modernization were carried out in ATK under the leadership of I. A. Makhanov and A. A. Monakov. Thus, in the 1929, the plant introduced some simplifications and changes to the design of the bolt; in 1930, the fastened round gun barrel was replaced with a monoblock. In the same year, a new metal wheel with rubber weights was designed for the gun, this wheel allowed to bring the maximum speed of transportation of the regimental cannon to 25 km / h. At the same time, it was only in 1934 that we succeeded in completely replacing the old version of the "shelf" in production with wooden wheels.

The crew of the 76-mm regimental cannon of the 1927 model consisted of 7 people: the commander of the gun, the loader, the gunner, the lock, the right and two boxes. According to the staffing table in the regimental artillery batteries of the following units of the Red Army, there should have been: regiments of rifle divisions - 6 guns in the battery until July 1941, after - 4 guns; in the cavalry regiments - 4 guns; in motorized rifle regiments of mechanized and tank divisions - 4 guns; in the artillery division of rifle brigades - 4 guns. After the adoption in 1943 of the updated 76-mm regimental gun of the 1943 model, this staffing table did not change. 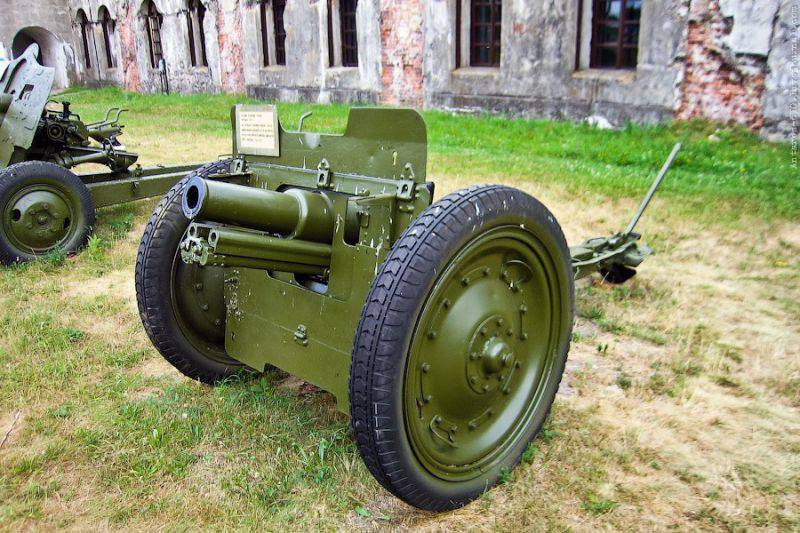 Already by the middle of the 1930-ies, that is, less than 10 years after being put into service, the regimental cannon of the 1927 model of the year passed into the category of obsolete artillery systems. The main drawbacks of the guns were the small angles of vertical and horizontal pickup, the low rate of fire due to the outdated piston bolt, and the low speed of the gun. It was criticized by the military and the relatively weak ballistics of a regimental gun, which limited the maximum range of its firing, as well as armor penetration. It is worth noting that at the time of the creation of the gun most of the tanks in the world possessed only anti-bullet armor - 10-20 mm, they were vulnerable to the shells of the regimental gun, and not only armor-piercing. However, the appearance of tanks with anti-missile armor abroad, which were resistant to the penetration of its 76-mm armor-piercing shells, high-explosive grenades and shrapnel, which were “hit”, exposed this problem.

The problem could be solved either by a deep modernization of the existing cannon, or the development of a completely new regimental cannon. At the same time in 1936, all work on the modernization of the existing guns were stopped. These attempts showed the impossibility of a qualitative increase in the characteristics of the regimental cannon while maintaining the existing mast, as a result, it was decided to create a new gun. However, it was possible to bring these works to a logical conclusion only in 1943, and not at the first attempt. At the same time, in 1942, in the USSR, cumulative shells of 76-mm caliber were developed and put into service, which provided armor penetration around 70-mm at all reasonable combat distances. This eliminated the need for a serious modernization of the gun itself and an increase in the initial velocity of its projectile. 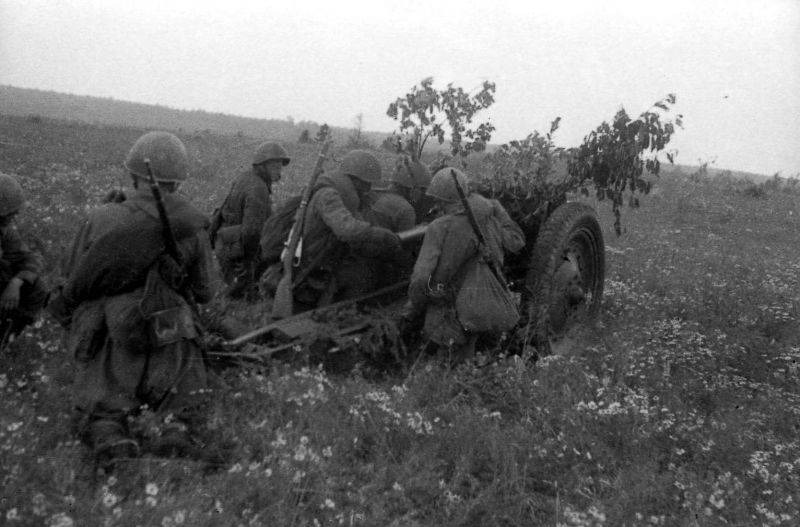 Structurally, the 76-mm regimental gun of the 1943 model of the year was a light weapon with weak ballistics on a sprung carriage with sliding beds. The gun carriage and anti-recoil devices were taken from the 45-mm anti-tank gun of the 1942 model of the year with minor changes, sights and bolts were taken from the regimental gun of the 1927 model of the year. The barrel for the new gun was redesigned. Compared with its predecessor, the "colonel" of the 1943 model of the year won significantly in mobility (the weight of the gun was less, and the speed of carriage was higher), as well as in the corners of horizontal guidance. The best angles allowed the calculation to more efficiently maneuver the fire and fight with enemy armored vehicles. At the same time, the new gun was inferior in range and accuracy. Although, as experts note, for a regimental gun, which is mainly intended for hitting targets that are within the line of sight of the calculation, this was not a serious disadvantage or advantage.

76-mm regimental guns of the 1927 model of the year were actively used in combat. They were used in all pre-war conflicts involving the Red Army: in battles with the Japanese at Lake Hassan and on the Khalkhin Gol River (14 cannons were lost in battles, 7 of them was irrevocable), in the Soviet-Finnish war of 1939-1940 (67 weapons were lost ), in the Polish campaign of the Red Army 1939 of the year. As of June 1941, the Red Army units contained 4708 regimental cannons of the 1927 model, including 2296 cannons as part of the troops of the Western military districts. In 1941-1942, these regimental weapons suffered very heavy losses, but they were able to compensate for them by releasing a significant amount of new tools of this model. Although the gun was discontinued in 1943, it was still used in the army until the end of the war. The interesting features of this gun attributed its aerotransportability, which turned out to be in demand in practice. At the end of 1941, in the besieged Leningrad, 457 of these guns was released, which were delivered by aircraft under Moscow, where they provided considerable assistance to the Soviet troops.

The regimental gun was intended almost exclusively for direct fire. During the offensive, such weapons by the forces of calculation had to follow right in the advancing orders of the infantry, in order to quickly suppress enemy fire weapons that impede the advancement of troops — artillery guns, mortars, machine-gun nests, and various firing points. During the defensive battles, the "regiments" were also in the combat formations of the infantry, firing at the advancing infantry of the enemy, and, if necessary, at armored targets. The specificity of the use of regimental guns led to significant losses in both calculations and the material part. At the same time, along with battalion artillery (45-mm cannons) and mortars, regimental cannons were the only artillery pieces that were located directly in combat formations and had the ability to quickly hit detected targets. Due to the relatively small mass and size, such artillery systems were actively used during amphibious operations, forcing rivers, during urban battles. 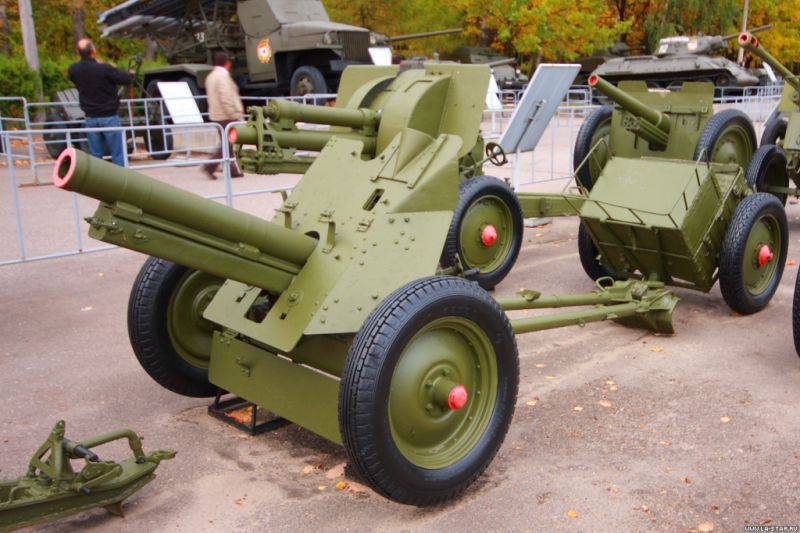 Ctrl Enter
Noticed oshЫbku Highlight text and press. Ctrl + Enter
We are
Divisional gun ZIS-3: the biography of the record holderAnti-tank artillery of the Red Army. 2-Part I
42 comments
Information
Dear reader, to leave comments on the publication, you must to register.