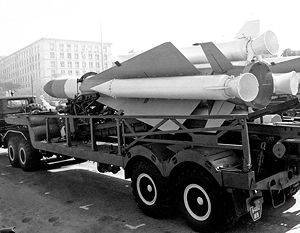 The main direction of military construction for next year in Kiev is called the revival of the air defense forces, which are now represented by outdated Soviet models. The problem is that Ukraine does not have money to buy modern systems, and there is no corresponding production in the country. The problem of other countries in connection with the plans of Kiev is the safety of civil flights aviation.


The secretary of the Ukrainian National Security and Defense Council Oleksandr Turchynov worried about the state of air defense of the armed forces of this post-Soviet state. According to him, the council considers the revival of air defense potential a priority next year.

“In the best case for Ukraine, it could be some kind of US-made man-portable air defense systems”

According to him, the main difficulties in this matter lie in the fact that anti-aircraft missile systems and radar stations that exist in Ukraine were manufactured at the enterprises of the Russian Federation, therefore it is necessary to create production facilities from scratch. Turchinov noted that spare parts of either Ukrainian production or NATO countries will be used to upgrade stations and complexes.

A spokesman for the Ministry of Defense of Ukraine Oksana Gavrilyuk said that in 2015, the agency purchased weapons and equipment for 208 million dollars, reports TASS.

According to her, these types of weapons, equipment and equipment include 67 artillery shells to armored weapons; 625 thermal imaging, optical sights and night vision; 50 ground based radars; 640 small units weapons and 1000 silencers to it. In addition, 31 units of armored vehicles and equipment, 30 anti-tank missile systems, 610 units of motor vehicles, 20 upgraded aircraft and helicopters, 28 units of electronic equipment for them were purchased. That is, all purchases concerned weapons for the killing of people and the destruction of buildings on the ground, and not air defense.

After the collapse of the Soviet Union, the Ukrainian state inherited the most powerful military group in Europe, which included a separate air defense army, nine separate air defense brigades, as well as three air armies and seven army aviation regiments. Also, 14 motorized rifle and four tank divisions of the Soviet army - each with an anti-aircraft missile regiment. These divisions had a total of 72 motorized rifle and tank regiments, each with an anti-aircraft missile division.

According to the 2014 year, Ukraine had 60 “Buk” complexes, 125 “Osa-AKM”, 100 “Krug”, 70 “Tunguska”, 150 “Strela-10М”, as well as several hundred 57-mm anti-aircraft guns and MANPADS “ Needle". In addition, at the disposal of the Kiev military there is a certain number of not the newest by Russian standards, but fairly sophisticated C-300 complexes, the number of which was not mentioned in open sources. According to the Ukrainian profile of the press, April 2013 years on duty consisted 60 battalions of S-200V, C-300V1, C-300PT / FP and "Buk-M1" It is reported that the S-200V, C-300PT and C-300B1 should be removed from service and transferred to the storage bases. The warranty period of service C-300 and "Bukov" have long been out, and workable complexes are assembled from components taken from other systems.

All the air defense systems that Ukraine has, Soviet-made, do not have their own production of modern systems.

Only thing for their history “Made famous” by the air defense of an independent Ukrainian state — shot down by mistake during the exercises of the Russian Tu-154 in 2001. Since the beginning of the war in the Donbass last year, anti-aircraft missile systems appeared on a photo from the ATO zone (which gave rise to suspicions of the Ukrainian side that they shot down Boeing, which was carrying out the MH-17 flight). actions they did not take. At the same time, we recall, the small and relatively efficient Ukrainian aviation was practically destroyed by the MANPADS of the militia already in the first months of the war.
Threat to passengers

According to Viktor Murakhovsky, the editor of the magazine Arsenal of the Fatherland, Ukraine has no chance to revive the air defense forces. “All the developers of air defense systems are in Russia. If we talk about the purchase of Western products, it is absolutely not the money that the western partners of Ukraine are able to allocate. In the best case for Ukraine, it could be some kind of American-made man-portable air defense systems, ”he told the newspaper VIEW.

He noted that from a military point of view, Ukrainian air defense does not pose any threat to Russia and its army, however, airlines flying through the territory of this state should be wary of Turchynov’s plans.

“These systems present danger in the sense that it can turn out to be unfortunate, as with Boeing. But if you look at Flightradar today, it’s like a black hole over Ukraine, everyone is trying to fly around it in any curved way, ”the expert concluded.

Ctrl Enter
Noticed oshЫbku Highlight text and press. Ctrl + Enter
We are
British naval anti-aircraft missile systems. 1-Part IThe new head of the National Security and Defense Council of Ukraine and his first statements
38 comments
Information
Dear reader, to leave comments on the publication, you must to register.