December 30 2015
43
The leaders of the so-called “Norman Four” (Vladimir Putin, Angela Merkel, Francois Hollande and Petro Poroshenko) held telephone conversations during which they discussed the fate of the Minsk agreements. Kremlin press service reports that it was decided to extend the action of Minsk-2 to 2016 year. From the message:

The leaders thoroughly discussed the remaining tense and unstable situation in the south-east of Ukraine in the context of the implementation of the agreed 12 February 2015 in Minsk agreements. It has been agreed to extend their validity by 2016 year. The importance of the further work of the Contact Group for the full and comprehensive implementation of the Minsk Package of Measures was noted.

The fundamental need for strict adherence to the cease-fire on the contact line in Donbass was emphasized. This would create prerequisites for the implementation of tasks related to the further advancement of a political settlement. It was agreed, in particular, to intensify the discussions in the Contact Group, focused on the early development and adoption of a law on local elections in certain regions of the Donetsk and Lugansk regions. 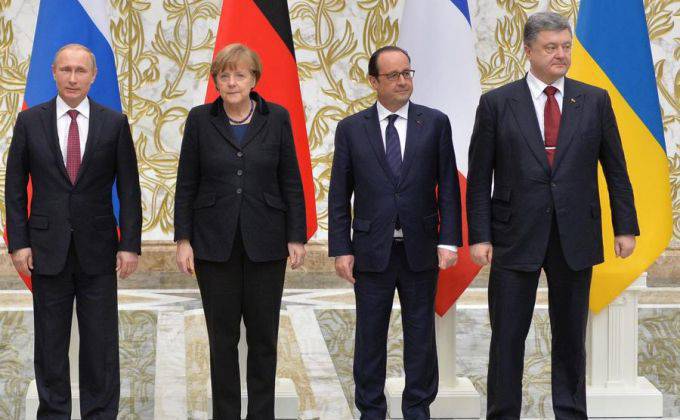 Recall that Boris Gryzlov was appointed a special representative of Russia in the Contact Group a few days ago.

According to the Kremlin press service, at the beginning of 2016, the foreign ministers of the “Norman Four” countries will meet to conduct an “inventory of the implementation of the Minsk agreements”.

The question of Ukraine joining the free trade zone with the EU countries was raised.

From the report:
Vladimir Putin outlined the assessment of the consequences of the implementation of the EC-Ukraine Association Agreement for Russian-Ukrainian cooperation, stressing that Russia had to switch to the most-favored-trade regime in Ukraine’s attitude. Issues related to the supply of Russian gas to Ukraine were also raised.

Ctrl Enter
Noticed oshЫbku Highlight text and press. Ctrl + Enter
We are
Petro Poroshenko and Angela Merkel held telephone talks on the situation in the east of UkraineThe action “Military service under the contract is your choice!” In Rostov-on-Don: future contract servicemen, exhibitions and “Russian Knights”
Military Reviewin Yandex News
Military Reviewin Google News
43 comments
Information
Dear reader, to leave comments on the publication, you must to register.