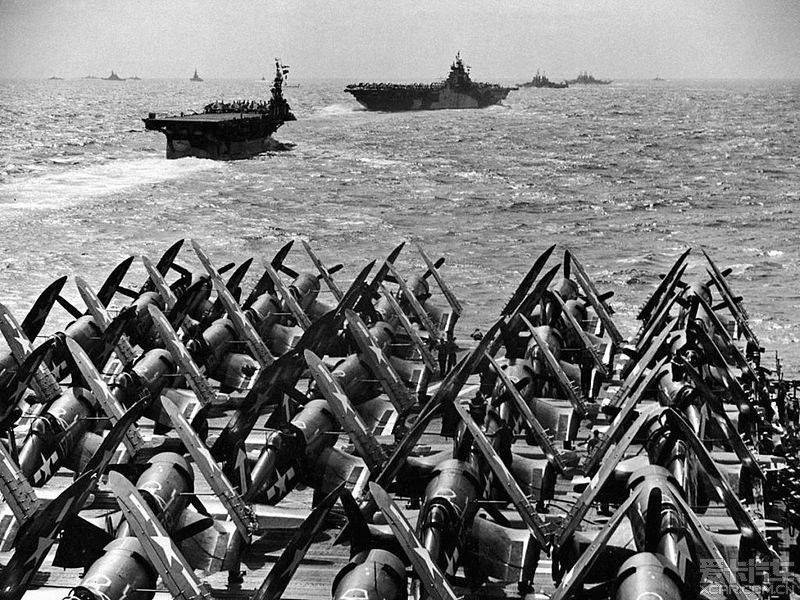 Once the brave Captains of Heaven ran into the same crazy Saviors of the Galaxies. A plot worthy of the best samurai legends! The heavenly captains themselves prefer not to recall the events of that day. Just think, the super-AUG from the 9 aircraft carriers received such a non-illusion action that was forced to flee!

This история tells about the events of March 19, 1945, promising to be the end of the Imperial fleetbut resulting in nothing. 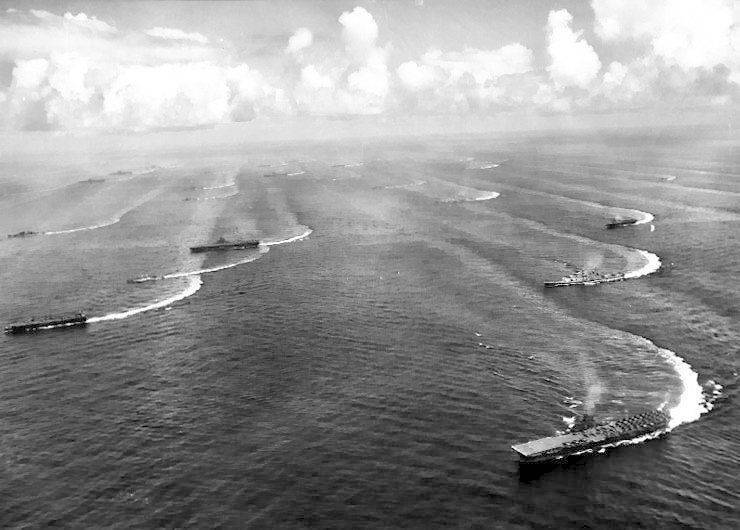 “Hornet”, “Yorktown”, “Wasp”, “Bennington”, “Franklin”, “Banker Hill”, “San Jacinto”, “Bello Wood” and “Bataan” moved forward on the enemy in a dense guard ring from cruisers , battleships and fifty destroyers. The 58 compound superscade was the most numerous combat ship combination in history, whose strike potential surpassed all the fleets of the world combined. The purpose of the campaign - the Japanese naval base Kure.

At dawn on the 19th, the first links of the deck aviation let's take off. And it started ...

The Yankees understood that the matter was amiss when the “Corsairs” from the VBF-10 squadron faced an unknown adversary. The pilots did not immediately understand who they were dealing with. Unknown aircraft of the new type with red circles on the wings and a short, concise “343” on the tail. And in no way inferior in their characteristics to American fighters.

The mighty “Corsairs” fought off, but were forced to return to their “Bunker Hill”. In their reports, the pilots noted, “high discipline, excellent tactics and enemy flight skills.” At this time, it was reported that the same “343” aircraft were tearing up the VBF-17 squadron. Despite the fact that VBF-17 consisted of aces of naval aviation, flying on fighters "Hellkat", considered among the strongest in its class. The result - unknown Japanese aces destroyed the 8 Hellcats, at the cost of losing six of their fighters. Exchange is more than fair. And for the US Navy Aviation model 1945, just insulting. By that time, the Yankees had considered heaven for two years their legal possessions. 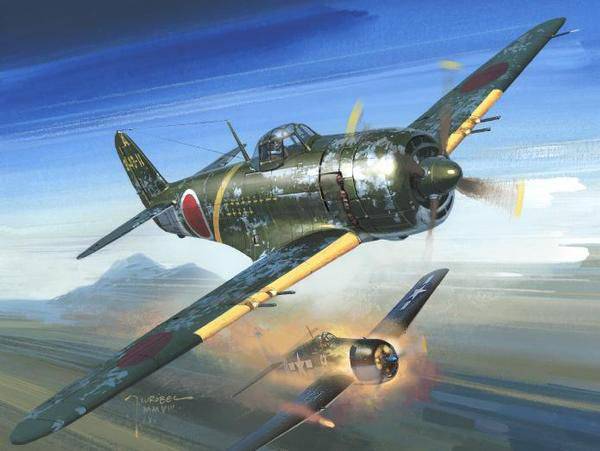 The following distribution got VFM-123. The half-hour duel ended with the rout of the squadron, three “Corsairs” were shot down, five were damaged, and the captains of the heavens fled. Three of those who returned due to their damage posed a threat to other aircraft on the deck of an aircraft carrier. The Yankees immediately pushed them overboard.

Meanwhile, in the squadron headquarters at Missouri received a radiogram: “We lost“ Franklin ”.

That morning, “Franklin” was 50 miles off the coast of Japan, cheerfully releasing shock groups when a Japanese bomber fell out of the clouds and “congratulated” the Americans with half a ton of morning freshness.

Of course, this could not happen. After all, everyone knows what the layered defense of an aircraft carrier group looks like. A thick curtain of air patrols, behind which are air defense ships bristling with radar and anti-aircraft guns. However, historical fact. An unknown Japanese pilot broke through the defenses and dropped two 250 kg bombs. And with impunity flew over the clouds. The exact type of bomber has not been established yet. 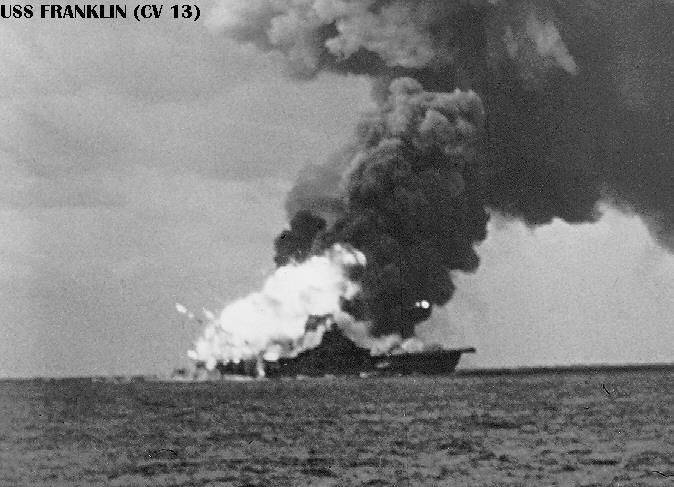 At that moment, the 30 was fully on the deck of the Franklin, and the aircraft were fully fueled and prepared for departure, and in the hangar, in a crowded state, were also 22 aircraft units, some of which also had suspended armament. As a result, everything that could possibly have burned on the aircraft carrier, including 700 seafarers (according to other 807 data). Brutal statistics. As a result of a fire that escaped control, “Franklin” received a dangerous 13 ° roll on the PB, lost its turn, the entire wing of the wing and the third part of its crew. Perfectly seeing his condition, the survivors gathered on the flight deck and prepared for evacuation. At this time, the “Missouri” decided the question: to give destroyers an order to finish off “Franklin” with torpedoes or try to save him. Assessing the situation, the command came to the conclusion that the likelihood of a repeated attack is small, the ships of the 58 Connection control the situation at sea and in the air to a sufficient degree. The heavy cruiser “Pittsburgh” tensed and dragged the “wounded animal” across the ocean. 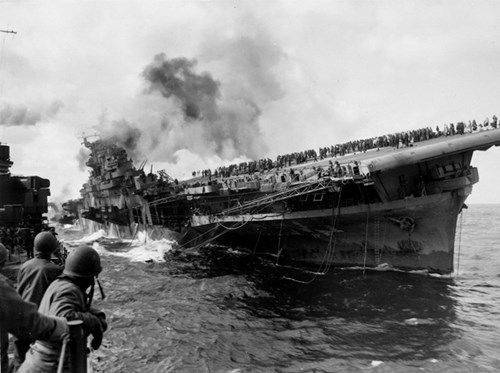 At this his misadventures are not over. Upon returning to Pearl Harbor, the commander will smash an already damaged aircraft carrier against the dock gate. And then it turns out that all the shipyards on the west coast of the United States are filled with ships that were damaged by kamikazes. And “Franklin” will have to go through the Panama Canal to New York. His repair will end after the war, but he will never go to sea. 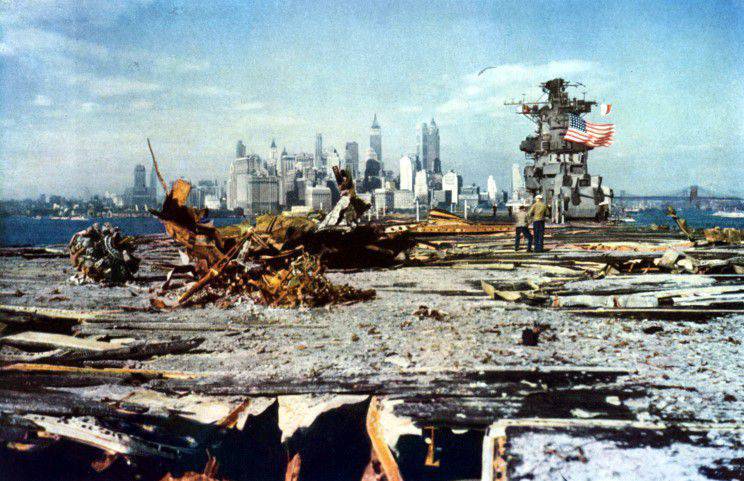 Arrive in New York
Together with “Franklin” during the operation, the same type of “Wasp” was damaged. The fires were brought under control, but the aircraft carrier was forced to immediately return to repair in the United States. Super squadron lost two aircraft carrier ships in a day!

And in the evening sky the silhouettes of the carriers of the “Oka” projectile aircraft appeared. Kamikaze went into battle ...

Not daring to tempt fate any more, the Yankees retreated south to bomb objects at the southern tip of Fr. Kyushu (in fact, they fled without fulfilling their main mission, defeating the Navy Kure). Two weeks later, “58 Compound” will be in the same composition to sink “Yamato”. And all because the sink it in the parking lot in Kure did not work.

The Yankees on that day did little at all. From the air waves from the 300 aircraft, units were able to break through to the target. Which immediately came under heavy air defense fire.

As a result, cosmetic damage was received by the battle cruiser Haruna (one hit). Two more bombs hit the “Hyuga” and “Ise” (which were long before the raid was put into reserve). The light cruiser “Oyodo” was badly damaged (nevertheless, it was brought to a combat-ready state in 12 days). The bomb was also damaged by the aft lift of the aircraft carrier “Amagi”. Everything.

In fact, the goals of the operation were not achieved. None of the targets sank. Most of the Japanese ships did not receive any damage at all (as in the Yamato harbor). Return “Pearl Harbor” turned into a waste of time. Provided that the cost of equipment squadron, and fuel consumption on the transoceanic transition squadron of hundreds of ships.

Given the loss of “Franklin” and its wing, we can safely talk about the tactical victory of the Japanese. A blow to Kure had its strategic consequences, delaying the defeat of Japan in the war.

All this was made possible thanks to the air barrier, which stood in the way of the wings of nine American aircraft carriers. The elite unit “343 th kokutai” under the command of an experienced sea pilot Minoru Genda (direct organizer of the raid on Pearl Harbor). Where were the best aces of Japan assembled on the Kawanishi N1K “Syden-Kai” (“Purple Lightning”) interceptors? The Star Squadron was based at Matsuyama airbase, covering Kura from the naval base. 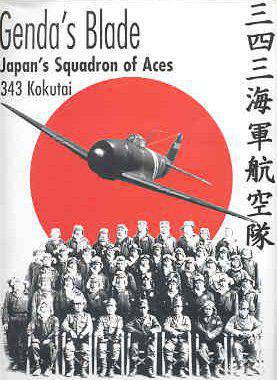 Genda-san was an opponent of “kamikaze” tactics, believing that a group of well-trained pilots was more effective in defense than a mob of one-off suicides. However, this conclusion is not obvious: the kamikaze also achieved impressive results. Striking the attacking squadrons, the man-controlled "RCC" interrupted 90% of the US Pacific Fleet.

Fighter "Syden-Kai" was considered one of the best interceptors of the Second World War. Equipped with the most powerful cannon armament and the 2000 horsepower take-off engine, he could fight on an equal footing with any “Corsair” and “Mustang”. There is a case when one of the pilots of the “343 th Fighter Group of Naval Aviation”, Kanayoshi Muto, flying on the “Sidane” shot down four American fighters in one battle. Another ace, the one-eyed Saburo Sakai, left 15-ti Hellketov, saving the plane and his life. The only problem was the assault height. Until the end of the war, the Japanese failed to start production of turbocharged engines. As a result, the Super Strengths sailing at high altitudes remained invulnerable to the Sydens.

The Kure naval base will be defeated on July 24 of the year 1945. By that time, Japan will no longer have fuel. On interception units will rise, among them - Kaneyoshi Muto. Attacked by dozens of “Hellcats”, his fighter will disappear amid bursts of sea waves. 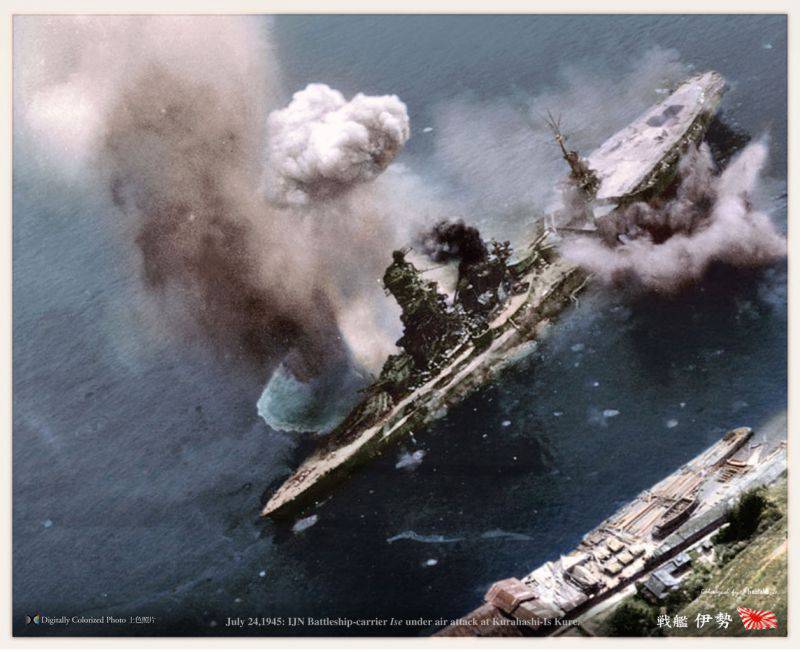