Refugees and returnees. From the experience of the postwar USSR 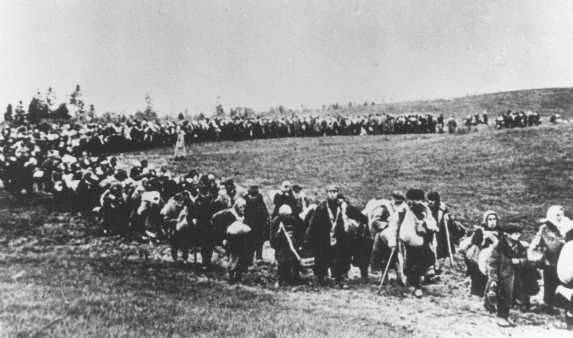 Authors who, not fearing to fall into exaggeration, call the “Great Migration of Peoples” a wave of refugees of several hundred thousand people who have now quarreled the EU countries, it is useful to recall that during the Second World War only in the Old World countries the number of refugees and displaced persons ( there are forcibly exported by the aggressor countries from the territories they occupied) amounted to more than 15,5 million people. Perhaps the long-standing Soviet experience of the repatriation of several million foreign citizens who have fallen out of their will in foreign lands can say something today to Europe as well.

The Soviet-German confrontation, which had a decisive influence on the course and outcome of the war in Europe, predetermined two main streams of repatriates and displaced persons: Soviet citizens from the territories liberated by the Red Army and allied forces to the Soviet Union, citizens of the anti-Hitler coalition states and prisoners of war who served in the armed forces of Germany and its satellites - in the opposite direction.

It must be said that the former Western allies made claims to the Soviet repatriation bodies that in the process of returning people who fought on opposite sides of the front to their places of residence, massive human rights violations were allowed: some (Soviet citizens), they say, repatriated without the principle of voluntariness (by the way, not provided for in the decisions of the Yalta and Potsdam conferences), others (citizens of allied countries and enemy prisoners of war) were detained against their will under various pretexts. Meanwhile, it was the USSR that encountered the resistance of the authorities of the allied states when returning home to Soviet citizens who were captured or taken out by the Hitlerites to work in Germany. As a rule, they were agitating against the return in order to replenish the camp of anti-Soviet emigration and form a reserve of cheap labor in the mines and plantations of the USA, Western Europe, South America, and the British dominions.

As for the Soviet Union, it has fulfilled its obligations when returning to the homeland of citizens of other states in a short time and in strict accordance with agreements between the allies. Without having any serious experience of such work, doing a great number of its citizens in parallel (and almost 5,5 million people turned out to be such), the Soviet repatriation bodies organized (not like the current EU authorities) during 1945-1946. transferred to the Western allies or directly returned to the places of permanent residence of all foreign citizens released from German captivity, and by 1951 - and the bulk of the soldiers of the Hitler coalition, who were in captivity in the USSR. In total, there were more than 5 million people.

The work on the repatriation of foreign citizens was based on the decisions of the supreme bodies of state power, primarily the resolution of the Council of People's Commissars of the USSR on January 6, 1945. Collection, registration, maintenance at assembly points (commandant's offices) and in transit camps, preparing people to be sent home were assigned. at the Commissioner of the USSR SNK for the repatriation of Colonel-General F.I. Golikov and his subordinate apparatus abroad and in the troops of the Red Army. In a short time, 18 of front commandant's offices (collection points) and 9 territorial collection points in Poland, Czechoslovakia and Hungary and the same number of transit camps in military districts in the territory of the USSR were deployed. A material base was created for organizing food and equipment for large masses of people, their domestic and medical services, as well as transportation. By May 1945, 77 commandant's offices and transit camps had already been formed for the reception of foreigners directly on the fronts of the army and 16 camps in the territory of the USSR.

Of course, not everything could be adjusted right away, the created network of collection points could not accommodate the growing flow of liberated people, the necessary facilities were lacking, there were difficulties with food supply. However, with the end of hostilities, the repatriation system quickly improved, the Soviet repatriation bodies created the necessary social conditions for foreigners during their stay in the USSR or on the territory liberated by the Red Army, until the transfer of repatriates to the Allied authorities. And already, of course, there could be no talk of inclining foreign citizens to not return to their homeland for ideological reasons, to which the Allied authorities actively resorted in their zones of occupation in relation to displaced persons from the Soviet Union.

In those years, many representatives of the Western powers praised the efforts of the Soviet authorities. Thus, according to TASS, 3 in May, 1945, the spouse of British Prime Minister Clementine Churchill, visited transit camps in Odessa and a military hospital in which English and French soldiers were released from German captivity, expressed warm thanks for the care shown in the USSR about British subjects.

During the 1951-1956. were also released from captivity and sent home about 50 as well. Thousands of soldiers of the Wehrmacht and the armed forces of the countries that fought on the German side, convicted of war crimes for lengthy sentences in accordance with the decree of the Presidium of the Supreme Soviet of the USSR 19 on April 1943 punishment measures for the German fascist villains guilty of murder and torture of the Soviet civilian population and prisoners of the Red Army ... ". The Soviet government showed mercy towards them, despite the fact that the situation of the outbreak of the Cold War with former allies in the anti-Hitler coalition, which were also joined by former opponents like the one created in 1949 and adopted in NATO in 1955 of the Federal Republic of Germany, it seemed to have no gestures ...

Ctrl Enter
Noticed oshЫbku Highlight text and press. Ctrl + Enter
We are
Diplomats of the People's Commissariat of Defense: on the eve and during the warLosses of the USSR and Germany in the Second World War
Military Reviewin Yandex News
Military Reviewin Google News
11 comments
Information
Dear reader, to leave comments on the publication, you must to register.