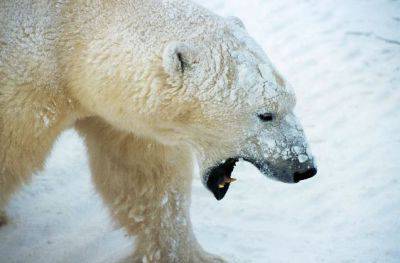 The strange sensation caused by the recent hype about the allegedly brutally killed by a explosive packet of a polar bear. As far as this история believable, everyone can judge for himself. If you take my personal opinion - the "order" of the purest water.


Another question is who needs it and why? Who needs to feed us with frank fiction to activate the gene of aggression?

But I will leave it at the end, but I'll start with the bear. More precisely, with a frank lie performed by the zoodefender G. Oskolkova. In general, I got the impression that she still worked at ukroSMI. The methods are very similar.

Quote from her performance at REN-TV:

“According to rumors, after the explosion, the bear shouted, and the bear cub, who was next to her, climbed under the container. Later,“ green ”came to the place, who fired at the bear with rubber bullets, as the wounded beast was a danger to people. As a result, the bear ran away with A bear cub on the tundra. The Greens said that there is no body — there is no work. The person who did this has already disappeared.

This story was told to me by my son, who worked at that facility. As my son told me on the phone, the locals fed this bear. Once he called and said that the bear had been killed, she was thrown a explosive bag, which she swallowed instead of delicacy. I asked if there were any witnesses, he said there is a video. I asked my son to let his friends drop this video, but for various reasons it didn’t work. Then one friend went to the site and brought this video. And this incident happened back in November. "

What really touches her performance.

1. The incident happened in November, but was bombed only in late December. What, one wonders, waited?

2. It was not possible for various reasons to forward the video. This is nowadays just some kind of nonsense. As ukrov, destroyed "Armaty" in Slavyansk. That battery sat on the phone, then there is no network. You can call, but throw something - no way. Noodles begin to interfere with listening with ears.

3. One friend went to the site and brought the video. I envy Oskolkovoy. Having such acquaintances who can go straight to Wrangel Island (just closed, by the way, the territory) just for the sake of one video is impressive. And in terms of finances, and in terms of connections. Noodles begin to stain the shoulders.

4. The locals who feed the bear are a masterpiece! Considering the fact that there are no locals on Wrangel at all, except for meteorologists and employees of the reserve. They are "locals". And, as one, especially reserved, it is aware, than stupidity with a feeding of a white bear can end.

But the words of the former chef Yuri believe. I believe that the lure of nothing to do was toiling someone from the authorities. Which can not be given to the jaw. And it would be necessary. Because such idiocy often ends in tragedy.

About rubber bullets of some kind of "green", as well as the "explosive package smeared with meat" even have no desire to comment. In general, an idiot is not a bear, but those who believe that he is capable of such nonsense. It is clear to the (knowledgeable bears) person that the beast has stuck to check that it has arrived. And got a nose (very sensitive) charge of firecracker. It hurts. I understand the bear. But I understand those who threw this thing.

Being on a business trip in one of our northern ... well, who knows what stuffed all over their lips, he is silent. It was, in short. And once in the weekend we went for the fish. And on the shore stumbled upon the Boss. Honestly, I never ran in my life again. And not the first to come to the finish (all-terrain vehicle). The first were more experienced and older service partners. As a result, minus the inflatable boat, catch and mood.

The polar bear is not a cute animal. This is a combat killing machine, weighing up to a ton. Ursa smaller, but compensate for aggression and speed. And the nastiest thing that can be is if some idiot feeds exactly a bear. Because it starts to protect its territory, where there is food, from everyone. Including from people. Even a male can be repulsed.

Fast, strong and agile killer - that's what a polar bear. Without hunting rituals (like a cobra, does not warn), with a completely unpredictable behavior (the bear has no facial muscles, he doesn’t shave and growl like a dog), he just takes and attacks.

By the way, we were saved by what he didn’t really want to catch up with. The fish in the boat saved. Because if the beast were hungry or angry, you will run away from him. 30 km / h gives easy, and spit him that way. The head is gone - the rest of the ass will carry. You can escape only in a place that he can not break. Motolaba, for example. And it is purely for fitness to spread a panel house to pieces.

By the way, this is the opinion of experts from a very well-known company WWF - For the Living Planet. Suspecting them to hate polar bears is impossible. So, read their opinion: Polar bear and man.

Well, once such a disposition, then with the opinion of the cook who allegedly fed the explosive package to the poor bear: [leech = http: //lifenews.ru/news/176893] The cook told his version of what happened to the bear in the Arctic [/ url].

That's enough. And so it is obvious that a certain group of people once again fed the people of the country with another lie. And on a lie, everything was wooed, from indignant lovers of cute white bears to some ministers who throw mud at the Internet. About the TV channels are already silent.

Let us leave on the conscience of Oskolkova, Foteev and others like them all that noodles, which they professionally threw over the shoulders of those who read and look. Let's try to forgive those who openly threatened all participants of the events a month and a half ago. Cook Yuri, his mother and wife.

Several points are noteworthy: the intensity of emotions and radicalism with regard to the accused. And I note that all these radical opinions are voiced mainly by the female half of humanity. Alas, there is no mind, no beauty, no truth in these opinions. Emotions, emotions ... The question arises: is there not anyone else to laugh about?

There is a superbly organized stuffing on the fan of a huge pile, the spray of which flew right up to the government of the Russian Federation and the Prosecutor General’s Office. The incident occurred more than a month and a half ago, on the night of November 8. Who and why needed to raise such a wave right now? Who and what distracts the attention of such a furiously indifferent public?

Who needed to include in the list many tens of thousands of people with heightened emotionality, incapable of independent logical thinking and critical understanding of information coming from outside?

Full impression of some kind of experiment on the selection and filtering of the population. And this is annoying, to be honest. If only because it is not quite clear to me for what purpose someone reveals outright hysteria in large numbers. And to whom these hysterics may be needed in such quantities.

"In such quantities" is me about 163 000 who signed the petition with an angry demand to punish all the perpetrators. Think about it.

163 000 people did not begin to understand what had happened. "Shavali info" and rushed to scribble and repost.

Alive and, unfortunately, stupid ammunition informational. And to make, as practice has shown, there is nothing to do.

1. Take any event. If only suitable for orientation to the audience. This is the body.

2. We charge an explosive. There is generally a field for creativity, again, any nonsense will come down, like a trotyl-checkered daub. Who is there among women, for example, will think about how this meat can be smeared with a piece, and in general, what is this piece? It is not important. The main thing is that the evil bear was hurt by evil people. You can generally carry a complete nonsense, but if there is a good sauce, they will eat it like pretty ones.

3. Striking element. Involvement to the event, based on the postulate "together we are power!" Plus, general discontent and heightened social justice. Here, of course, the authors of the stuffing should have been able to domontorize the video of happily giggling males and shouting like "And how they die - we will make a shish kebab." That's when it would have exploded like a nuclear weapon for sure.

Then everything is simple. Laiki, comments, comments of famous people, the reaction of the official structures - and here you already have his Majesty Public Opinion.

It remains only to throw the findings in the heated head. In our case - see what these do in the Arctic! Bears are cruelly killed! And what will happen next?

First: everyone who got into this story with their comments and likes was computed and recorded. Each. And, most likely, taken into account and put in the daddy "for the future."

Second, negative attention is drawn to the arctic region.

You can, of course, gut every detail in detail and clearly demonstrate that the whole story is a complete lie. But now to whom and what will prove? The main thing has already been done. Such is the gregarious thinking of this "target audience."

And something difficult to oppose. For a well-organized flock is already a crowd. Well, while the flock sits on the Internet. Worse, when a herd turned into a crowd, will lead to the streets. This we have already passed, and thank God, not by example. Until.

The country of Russia is too big, too much of the Arctic belongs to it. And from the shelf of the concession, everyone squeezed out slowly. Therefore, a flurry of stories about the terrible horrors of the North, the stimulation of separatism of small nations and so on will only increase.

Yes, this is a problem. Too much forest, too much gas, too much oil and uranium. Too much tasty shelf in the Arctic. Too much of everything.

Therefore, without a doubt, our “partners” will try to do us all sorts of nastiness. And look for those who can become their hope and support.

People, beware! And before you get familiar with the next substance flying from a fan, let everyone think for a minute: is it all the way they are told? In the words of one hero of a famous film series, "in our difficult time, no one can be trusted. Even to himself. Especially if there are a lot of likes."

Ctrl Enter
Noticed a mistake Highlight text and press. Ctrl + Enter
We are
A great interview with Sergey Lavrov: about Ukraine, Obama and IranWhat you didn't want to know about England
320 comments
Information
Dear reader, to leave comments on the publication, you must to register.