Official economic rating by region of the Russian Federation

December 30 2015
90
The end of December. As they say, time to sum up. And against the background of a huge coma of large-scale international events and processes, it would be wrong to ignore the Russian regional results of the year. It is wrong to ignore, if only because Russia is a federal state and national interests, including economic interests, are a kaleidoscope of the interests of the subjects of the Russian Federation. Similarly, national successes or failures are primarily a reflection of the successes or failures of each individual Russian region taken.


Holding office wisdom in your head about what is a lie, is a blatant lie, and there are statistics, you still have to turn to official statistics. Well, if only because official data is the only source of this kind of information. Before considering such statistics, I would still hope that the above-mentioned office wisdom has nothing to do with the data presented below. Moreover, the right to hope, as they say, has not been canceled ...

So, some, I want to think, interesting economic statistics of the regions of Russia on the results of the outgoing year.

Based on data from the Federal Service for Labor and Employment (Rostrud), the Ministry of Labor and Social Protection of the Russian Federation and the Federal Portal of Administrative Personnel, a multi-level rating of the subjects of the Russian Federation is presented. The rating was compiled on several points at once, including such as
average wages, unemployment rate, price level, housing affordability for various categories of citizens, regional economic dynamics (growth / decline rates), accessibility of pre-school education (accessibility of kindergartens).

You can start with regional economic dynamics. To begin with, it is necessary to remind that the all-Russian economy (GDP) for the year is reduced by about 3-4%. The official forecast for the “narrowing” of the Russian economy from the IMF for the current year is 3,7%. At the Ministry of Economic Development, the forecast is different - about 3%. And what about the regions? 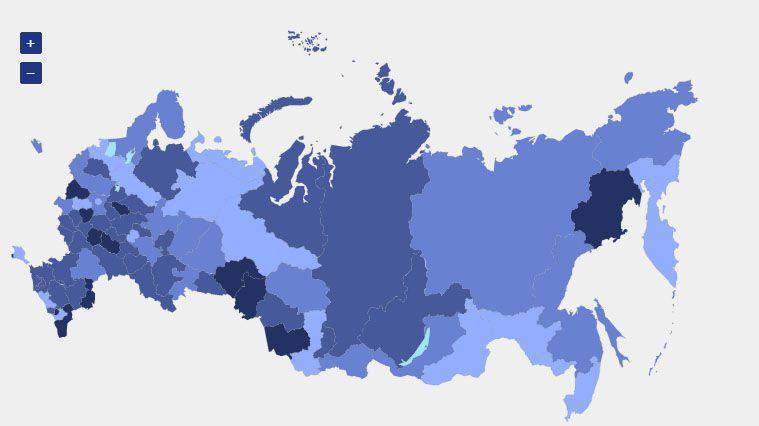 Here you can afford to joke, saying that the head of the Ingush Republic, Yunus-Bek Yevkurov, can rejoice, because, firstly, he left Chechnya far behind the neighbors - Chechnya (Chechnya has a minus 1,5%), and secondly, economic growth Ingushetia has overtaken ... the Chinese. It turns out that either statistics gurus work in Magas, or irony is inappropriate here, and Ingushetia has managed to really achieve such impressive indicators.

Perhaps, after reading such data, readers from among the residents of the listed regions will say that the data is “linden,” the author supposedly found everything; to shower him with rotten eggs and tomatoes ... But, as has already been noted, these are the results shown in the materials collected by Rostrud and the Ministry of Labor. But really seriously to treat this data - the opinion of each individual reader.

It was noteworthy that the indicators of the Republic of Crimea and Sevastopol, which are members of the common Crimean Federal District, differ. If Sevastopol is at the top of the table, then the Republic of Crimea is an absolute outsider of the rating. It would be possible to write off everything on anti-Crimean sanctions, but then how to relate the Sevastopol indicator to this? Or do you still need to dig deeper than what is explained only by the sanctions regime?

What do we have (more precisely, theirs) on employment?

As they say, attention is the question: how did a republic with a third of the unoccupied population manage to achieve economic growth in 11,3%? How could the region be the first in terms of economic growth to be the last in the list of regions in terms of employment? Once again, you are convinced that statistics is a wonderful thing ... It can be assumed that the whole thing is federal infusions, but infusions were certainly not smaller in the Republic of Crimea, and there is a significant economic decline and the average unemployment in Russia is 6%. Practically, everything is exactly the opposite. Or Simferopol really has not mastered the funds allocated by Moscow, not wanting to do it rush for the New Year, and therefore such an indicator ...

Moscow is also in the upper part with 14,68 thousand rubles. for a fixed set of goods (per month).

The most “cheap” region of the country is Sevastopol (10,9 thousand rubles).

Regions in which matters regarding the availability of kindergartens are worse than others are Stavropol and Krasnoyarsk Territories, Karachay-Cherkessia and North Ossetia-Alania. High provision of preschool children with kindergartens in the Vologda, Vladimir, Novgorod, Arkhangelsk regions, on Chukotka, Sakhalin and in the Primorsky Territory.

In general, the indicators make you think. And first of all, think about how the official figures will coincide with the real ones, if there was a possibility of such a comparison across all regions of the country?

More official statistics can be found on the Internet site. trudvsem.ru.

Ctrl Enter
Noticed oshЫbku Highlight text and press. Ctrl + Enter
We are
Results of the week. “I have sawdust in my head. Long words only upset me. ”Results of the week. “Do you have brains or kyu in your head ?!”
Military Reviewin Yandex News
Military Reviewin Google News
90 comments
Information
Dear reader, to leave comments on the publication, you must to register.