December 31 2015
13
I will begin my story about the Russian harmonica on the roads of the Great Patriotic War with such an episode.

I love to come to the school of Panikovets village, Zadonsky district: she is very warm and homely. So, one graduate of this school, Nikita Ganin, played great (and plays) on the button accordion. At the time of his school life, the boy did not part with this instrument, spoke at all school events, even played at recess, and after school he “sounded” football matches at home. But they announced a regional competition for fiction readers. Nikita decided to learn the famous lines of Tvardovsky about Vasily Turkin - where about harmonies - and go on stage with the instrument. And here is the problem: Nikita played the accordion. It will seem ridiculous to many: so what? The sound is very similar, the instruments are “brothers”, what is the real thing? But Nikita judged differently. He got a real three-row and learned to play it himself. At the competition, he won a prize, and since then the accordion - his true friend.

The boy read the passage and me. And how it was good and great! “... for the beginning, for order, threw my fingers from top to bottom ...” - and Nikita's right hand ran along the buttons ...

I remember, I asked the student: why, they say, you attached such importance to what kind of instrument you would have in your hands? And he said: “Yes, I wanted to understand what Russian harmonist soldiers felt” ...

Of course, there were button accordions in the war, not just accordions. And there were balalaikas and guitars. But the boy did the right thing, since the ring took our memory so respectfully and scrupulously.

And now, as they say, to the point. Yes, she walked along with all our soldiers along the roads of the war. “Who said that there is no place for songs in the war? After the fight, the heart asks for doubly music! ”- remember these famous lines from the movie“ Only Old Men Go To Battle ”? 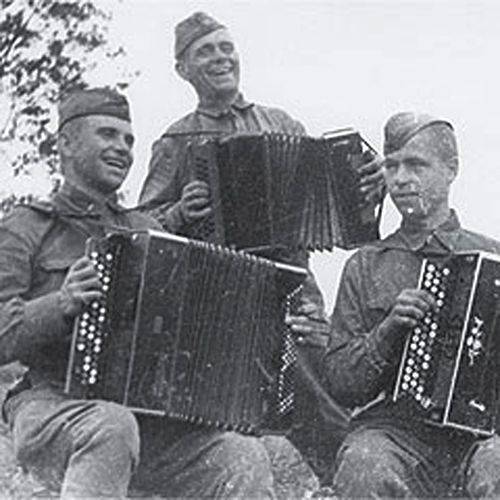 The first word is to a war veteran. “... At the front, I have not met any musical instruments, except for an accordion. They often played on it at halts, dances, dances were organized spontaneously, and songs were sung. Harmony lifted the spirits, eased the everyday difficulties of the fighters. The accordion was not used at the most advanced - the Germans immediately opened fire ... After three days of fighting during the assault on Königsberg and sleepless nights, the soldiers were overwhelmed by sleep. Having spread their greatcoats, the soldiers slept in the courtyards, on the sidewalks and even the pavement. And after the rest some accordions came from somewhere. All accordion players were very young. The fighters sang and danced. Everyone enthusiastically expressed their joy in connection with the capture of the strongest fortress in Europe "- wrote Pyotr Mikhailovich Shkinder, a reserve colonel who went through the whole war and reached Berlin.
Directive No. XXUMX of the Main Political Directorate of the Red Army said: “The Russian song, accordion, dance are the friends of the fighter. They rally people, make it easier to bear the burden of combat life, raise the fighting ability and shape the mood of the personnel. In each company one must have a singing, harmonists and accordion ".
By the way, in the first months of the war the three-row was obviously not enough - only about seventy thousand. That is why letters were sent to Tula and Shuya with the call: “Give the soldiers a accordion! It's easier to fight with a song! ” There was even the slogan "In every company - accordion!".

In general, it is believed that the accordion is not a Russian instrument, it was invented by the German master tuner Bushman. But only he was born in the early nineteenth century, and the accordion appeared earlier.

The Tula craftsmen - the Shkunaev brothers and weapons Sizov master. True, the right side of the first accordions was tuned only for a major scale - hence the strong connection of the accordion with the ditties. However, let us return to the beginning of World War II.
At that time, the Tula and Shuya factories, which were producing crutches and skis for the needs of the front, began to restructure and expand production in order to manufacture harmonica for our soldiers. 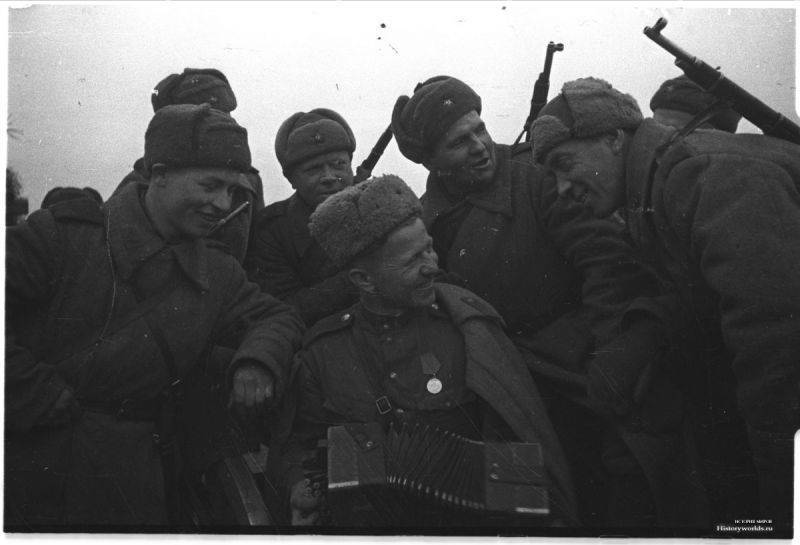 Now the three-row sounded literally everywhere: in the hospital and the rear, in the partisan detachment. Often some interesting music was associated with a musical instrument. история. For example, in Minsk, in the Museum of the Great Patriotic War, the accordion “Hohner” is kept - a trophy of the First Belarusian partisan brigade of the Vitebsk region. In May 1942, the scouts of this detachment noticed two motorboats on the Western Dvina, near the village of Ostrovki, and opened fire on them. The first one was hit right away, and an accordion was found in it (the second boat was also hit, but at the neighboring village). The tool was used by the nazis during their campaign trips around the captured villages of the Vitebsk region. The guerrillas handed over the found accordion to Moscow - with a request to hand it over to the Belarusian Song and Dance Ensemble. A letter was attached under the keys: “Play on it merrily, and let its sounds thunder with a funeral march for Hitler.” The ensemble actually passed this instrument, which has since traveled a lot of roads with new owners. And in the 1944 year, during a partisan parade in Minsk liberated from the fascists, the partisans saw their old trophy.

Until 1954, this accordion performed at concerts of the state ensemble of the choir of the BSSR named after G.Shirma. And then the musicians transferred him to the museum in Minsk.

But the memoirs of Alexander Terent'evich Makushev, a veteran, holder of the Order of the Great Patriotic War, the author of the book “Tell, accordion”: “Turka harmonious balagurs were invariably in every partisan detachment. They showed their agility in battles and sabotage, in romping harmonica playing, skillful stories and jokes. Many harmonists were excellent scouts. Unfortunately, being at the forefront of the struggle, they died from enemy bullets ... ”

In a well-known book Memories and Reflections, Georgiy Konstantinovich Zhukov also remembered the accordion with a kind word: “When preparing for the operation of the steppe front, I had to get acquainted with the commander of the 53 Army, General I.Managarov. And when the work was over and we sat down to dinner, he picked up the accordion and perfectly played a number of very funny things. Fatigue vanished. I looked at him and thought: these commanders are very fond of the soldiers and follow him into the fire and into the water. I thanked Managarov for an excellent game on the bayan, which, by the way, was always jealous ... " 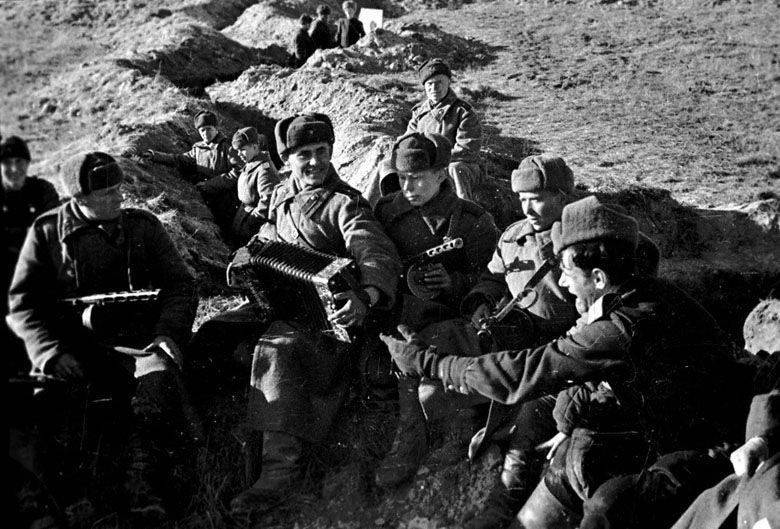 And now another story about accordion. I recognized her when I visited the Lipetsk school No. XXUMX, more precisely, in her Museum of Fighting Glory.

When the war began, Muscovite Misha Stepnov was 13 years old. In the family, he immediately stayed for the eldest: his father went to war, and soon a funeral came to him. Mother, having received such terrible news, was seriously ill, and she sent Misha to look for her (Misha) uncle. So the boy got into the 637 regiment and became his son. He helped the soldiers in the household, and in his spare time he played harmonies for them. Smarty boy fell in love and even sewed him his special form. So, together with the 637 regiment, Misha Stepnov got to Berlin. And there, on the Day of Our Victory, the soldiers literally everywhere organized improvised concerts on the go. Mishka decided to perform at such a concert. He picked up the accordion - and the famous Katyusha poured. The fighters jumped to the boy, began to sing along and clap.

And suddenly, in the midst of this jubilation, an officer jumped out of the crowd.

Yes, it really was Mishin's father, who was considered dead! It was not by his face that he recognized his son, but by the romping game. And where they met: in Berlin, thousands of kilometers from their home ... But, if it were not the voice of the accordion, the father could just stand with his back to his son - and the meeting would not take place ...