January 5 2016
32
So another year has passed, it's time to take stock of it. In general, he undoubtedly stood out for our underwater fleet very positive and productive.


This year especially pleased OJSC CA Zvezdochka, this company passed after repair the diesel-electric submarines of the 877 project, B-459 Vladikavkaz, as well as the MTV project 20180TV Akademik Kovalev, intended for the transportation and loading of the Bulava submarine-launched submarines. Also, finally, it was withdrawn from the BS-64 Moscow Region workshop after re-equipment as an SSN. destination.

Also, the K-114 Tula, which came in last year for the next medium repair, was introduced into the filling pool. The following boats are currently being repaired in this enterprise: K-328 Leopard, K-461 Wolf, K-391 Bratsk and K-295 Samara. The 1 PLA of the 949А project, K-266 “Orel”, which this year saw a fire, is also being repaired, fortunately, did not cause significant damage.

Here it is worthwhile to add at least the 1 AGS of the 1910 "Sperm Whale" project, the 1 PLA of the 667BDRM project, and the 1 PLA of the spec. destination (BS-64 "Moscow region"). This year it was introduced into the K-461 “Wolf” workshop, and work on its repair and modernization will finally unfold as it should be.

This year 3 held important events at Sevmash: laying a submariner of the PLN project 885M K-571 “Arkhangelsk” on the day and laying down the 18 of December 4 of the new 955 project “Emperor Alexander 3”.

In addition, this year's ASN 885 PLN, Severodvinsk K-560, this year, was carried out in the White Sea extended acoustic tests. Of course, nothing will be known about the results for a long time, but it is more than obvious that at the moment K-560 has the highest secrecy among our nuclear submarines.

3 important events are connected with the new series of strategic rocket carriers of the 955 "Borey" project, commissioned in 2012-2014 of the year. The lead ship of the K-535 series "Yuri Dolgoruky" made the first combat duty, from which he returned on October 15. One of the most important events this year was the transfer of the K-550 "Alexander Nevsky" to the Pacific Fleet, this ship was the first of the new ships for our Pacific Fleet, which, alas, he had not seen for a very long time.

Also from the board of the K-551 "Vladimir Monomakh" a Bulava salvo launch was made, but, alas, partially unsuccessful, apparently, 1 or several warheads of one of the missiles did not hit the target. This year the Nerpa shipyard completed the repairs of the K-331 Gepard and the P-shk B-336, which significantly increased the combat capability of the submarine forces of the Northern Fleet.

Undoubtedly, this year turned out to be very saturated for diesel-electric submarines of the 636.3 project, the first 2 boats of this project, the B-261 Novorossiysk and the B-237 Rostov-on-Don, have already made the transition after the final tests at the SF to the permanently-based base in Novorossiysk on the Black Sea Fleet , finally, the replenishment of the underwater forces of the Black Sea Fleet began, which until then had only been submitted to 1 diesel-electric submarines of the 877 project.

"Rostov-on-Don" on the way to the Black Sea Fleet even applied weapon on the real enemy: December 8 was hit by the KR Caliber against ISIS positions in Syria.

Flags were raised on another 2 PL of this project: on B-262 "Stary Oskol" on July 3, and on B-265 "Krasnodar" on 5 in November, "Stary Oskol" arrived at the Federation Council to complete the tests. The construction of 2's subsequent submarines of this project continues: the B-268 "Veliky Novgorod" and the B-271 "Kolpino". There is information about the possibility of ordering another 1 series of boats of this project for our fleet.

The repair of B-871 “Alrosa” on the Black Sea Fleet, B-187 “Komsomolsk-on-Amur” is also continuing, the repair of the latter is an incredible epic that lasts for more than 10 years, and one of the diesel-electric submarines of the 877 project in Vladivostok is being renovated. Also considered the possibility of repair on the "Star" B-808 "Yaroslavl". And these are only the most significant and illuminated events, not counting routine DB, routine training, training of new crews and much more.

Plans for the next year are very ambitious. The asterisk next year will deliver the K-266 Eagle and BS-64 Moscow Region. It will be taken out of the K-328 “Leopard” workshop, the first PLN of the 971 “Pike-B” project, which underwent medium repair and modernization. Apparently, the 3 ship of the 20180 “Akademik Alexandrov” series will be launched.

And, perhaps, for me personally, the event number 1 of the next year, which, however, may decrease in the 2017 year, and which I have been waiting for from 2010, is a withdrawal from Kazan’s K-561 “Kazan”, the head PLN of the 885M project. After withdrawal from the Kazan workshop, Sevmash will steadily begin to withdraw the remaining orders, and after handing it over, the rest will also start steadily, such pauses as after the withdrawal and delivery of Vladimir Monomakh with the “new wave” of replenishment, obviously, will be.

Must make the transition to the PF K-551 "Vladimir Monomakh." Also next year, apparently, more Bulava launches should take place, God forbid everything will be in order. The repair of another 2 diesel-electric submarine of the 877- “Alrosa” project on the Black Sea Fleet and “Komsomolsk-on-Amur” on the Pacific Fleet should be completed.

Regarding the "Admiralty Shipyards." Obviously, another 2 submarine of the 636.3 project will make the transition to the Black Sea Fleet, these are “Stary Oskol” and “Krasnodar”, and another 2 submarine of this type will be lowered: “Veliky Novgorod” and “Kolpino”. It is possible that they will be handed over in the terms specified in the contract 12.2016. If this is the case, then this will be an extremely, alas, atypical case when contracts are executed as scheduled. But the transition to the Black Sea Fleet they will take place all the same only in 2017 year. And according to the latest reports in December next year, the second boat of the 677 project Lada-B-586 “Kronstadt” will be taken out of the workshop. Also next year, according to the latest official reports, an epoch-making event for us should take place - the beginning of tests of the VNEU in the experimental compartment.

Separately, it should be said that it is in full swing, and in 2016, the creation of infrastructure will continue - from housing, to berths and modernization of enterprises. I really want to believe that the new year will be even more productive for our submarine than the last! 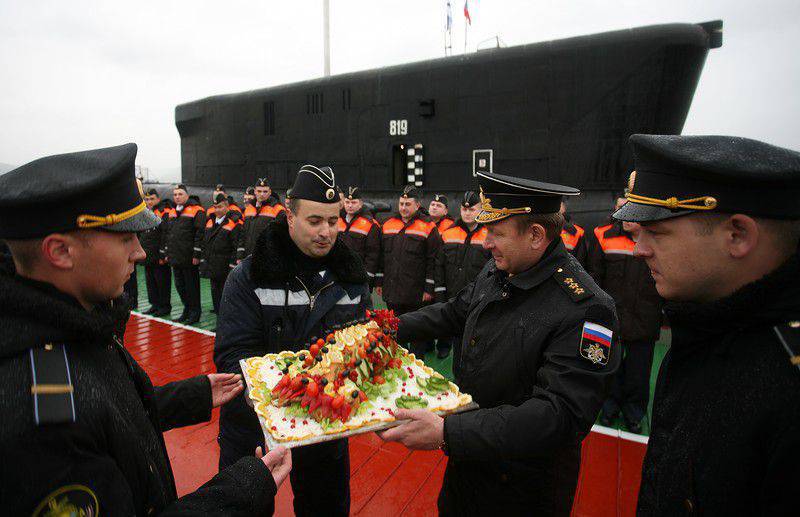 Ctrl Enter
Noticed oshЫbku Highlight text and press. Ctrl + Enter
We are
Russian fleet modernizes nuclear submarines of the 971 "Pike-B" projectDiesel-electric submarines of the 877 "Halibus" project
32 comments
Information
Dear reader, to leave comments on the publication, you must to register.