Today, no one is surprised at the high development of engineering in Japan, which began after World War II. But few people know that before the war, the military engineering ideas of Japan were also at the level of world standards. This is evidenced by the development of combat engineering vehicles of the country of the Rising Sun in the period 1929 - 45.

It is believed that the "pioneers" in the development of the production and use of remotely controlled blasting machines were the Germans. The most famous are "mobile mines" of the type Sd.Kfz.301 "Goliath", which was widely used during the Kursk battle. However, few know that even in 1937, a similar machine was made by Japanese engineers.

It all started back in the late 20s. 20 tbsp. The Japanese were one of the first to develop remote-controlled wedges for reconnaissance and overcoming minefields and delivering subversive charges to fortifications: in 1929 the "teletank demolition" was tested, created by Major Nagayama on the tracked chassis of the Fordson small commercial tractor and known under the designation K-2. With a mass (with a fixed charge) of up to 13 tons, this machine had a length of 5,75 m, a width of 2,18 and a height of 2,56 m, and was protected by armor 12–10 mm thick. The “teleplate” control is manual, with the transmission of commands over the air. Based on small tank Type 97 "Te-ke" was even built radio-controlled machine to control these wedges on the battlefield. 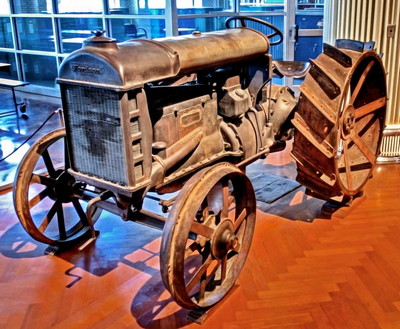 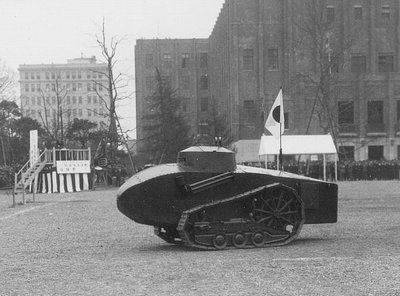 In 1930-s. The work on the remote-controlled tanket was continued under the leadership of Major General Tad. It was about small-sized wedges-carriers of blasting charge with an electric motor (wedge "And-go"). However, in contrast to Germany or the USSR, the matter was not brought up to production samples and practical application in Japan.
In preparation for the attack on Mongolia and southern Siberia, the Japanese command assumed that the troops could face a strong defense, which included concrete bunkers and armored weapon emplacements converted from tanks buried in the ground. These structures began to be erected during the conflict on the CER and posed a considerable danger not only for infantry, but also for tanks. To avoid unnecessary sacrifices, the 98 Type Engineering Machine, also known as I-Go, was developed. It supplied a small-sized tracked chassis, on which a charge of explosives was installed — the machine was driven and undermined by wires.
During 1937-1938 Two modifications were developed (Ko and Otsu), the latter carrying a more powerful explosive charge and had an increased geometrical dimensions and a stronger engine. Before the attack on Mongolia, several "engineering vehicles" were placed at the disposal of the 27-th independent engineering regiment stationed in Manchuria. I didn’t have to test “I-I-Go” in combat conditions, and in 1940-s all the work on this project was stopped. The possible reasons were the excessively low speed of the machines, which did not exceed 4 km / h, and their great vulnerability to small-arms fire. weapons.

On the arms of the Japanese army in limited numbers consisted of tracked armored universal engineering vehicles, which received the designation "SS" ("SS II"). Some of them were equipped with lifting knife track rails and at the same time could carry another two or three flame throwers and equipment for setting a smoke screen, which turned these machines into a means of assault on the enemy’s fortified positions, covered with minefields. The same cars carried equipment on the roof for transporting a folding track-bridge, which was discharged using a roller device. The machine was developed on the basis of the tank Type 89, but with a slightly increased volume of the hull. 1931 to 1943 98 such machines were released. 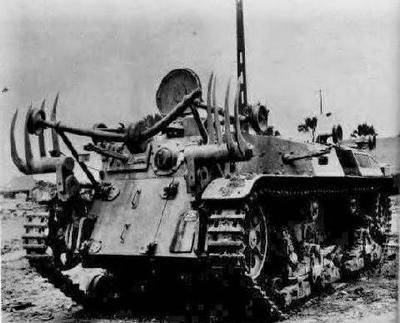 Pay tribute to the Japanese and boykovy trawls. Several medium tanks Type 97 "Chi-ha" were converted into minesweeper tanks: in the forward part of the hull on the long frame was attached a dredging trawl with chains, the rotor of which was rotated from the tank's driving wheels through a special gearbox - the obvious influence of the American T4 tank sweepers with boikovy trawls ("Crab" II). The frame was raised and lowered hydraulically. The main armament of the tank was maintained. In the literature, these minesweeper tanks are known as "Tank G". 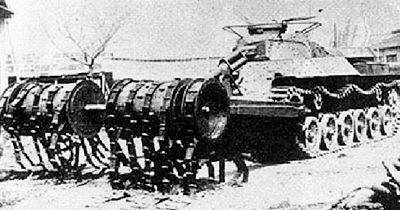 Developed by the Japanese and other cars.

"Ho-k" is an armored engineering obstacle machine (logging machine), developed on the basis of the tank "Chi-he." An armored wheelhouse was installed on the 5 man instead. A special ram was attached to the forward part of the hull to make a passage in the barriers. In 1942 - 43 built 2 instance. Machines were built for use in Siberia, but ultimately they found use in the jungles of New Guinea.

“Chi-yu” is a modification of an armored mine sweep based on the tank “Chi-ha.” The turret and weapons were not dismantled, but a frame was fastened to the front of the hull, in front of which a mine sweep was installed. The number of samples collected is unknown.

"Se-ri" - armored recovery vehicle. Instead of the standard turret of the “Chi-ha”, a small conical turret was installed with an 7,7-mm machine gun Type 97, and in the rear part was installed the boom of a crane with a payload of 5 tons. The forced Mitsubishi Type 100 engine installed on the BREM developed the power of the 240 HP, which, in combination with the winch, made it possible to carry out field repair and evacuation of medium tanks. This machine did not become mass-produced - the issue was limited to 2 or 3 copies. 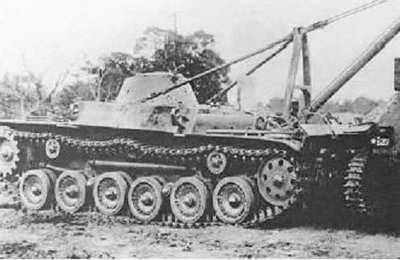 "TG" - a rather original modification of an armored bridge construction. In order to reduce the laying time, a unique design of the bridge ejection using two missiles was developed. In fact, the bridge flew a few meters ahead, with the result that the whole process took a few seconds. Another positive side, oddly enough, was its small carrying capacity. The bridge could safely withstand any Japanese light tank, but not American. However, the mass production of the T-G bridge laying machines was not established.

The moment of departure of the bridge structure from the stacker

In a second the bridge will fall on the obstacle.