Kurdish question and the prospect of a civil war in Turkey

December 30 2015
34
In Turkey, activists revived the Kurdistan Workers Party. In response to the actions of the Turkish government, party representatives announced the termination of a two-year truce. The Kurds demand self-government in the southeastern provinces, threatening Ankara with a real civil war. Now in the country torn apart by strife, there is a "anti-terrorist operation", and up to ten thousand police and military men are participating in it. 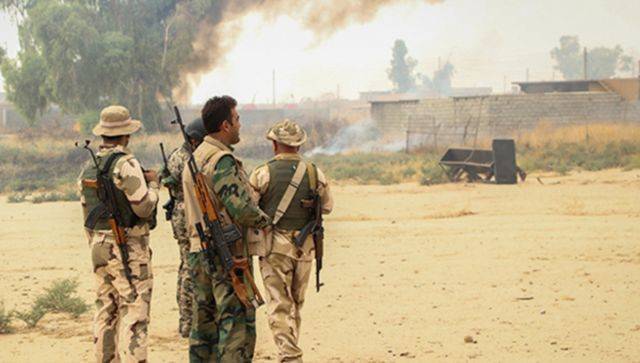 As reported by 27 December "Fund of Strategic Culture" with reference to the Ekurd Daily, in Turkey, with new force, clashes of the army and internal security forces with the Kurdish population of the south-east of the country flare up. In the city of Diyarbakir there is a street confrontation with army units and police units: "... the echo from the shots and explosions can be heard for miles from the city limits."

Four cities in the southeast (Diyarbakir, Jizre, Silopi and Nusaybin) are in a state of siege. A state of emergency has been introduced, a curfew is in effect.

“Anti-terrorist” operation is carried out with a large concentration of units of the regular army, with the involvement of heavy armored vehicles. In the regions where the protests were suppressed, the army engaged a 10-thousandth grouping of troops.

Over the past six months, over a hundred Kurdish women and children have died as a result of the actions of the army and police in south-eastern Turkey.

Kurdish sources call the events “cultural genocide” and “ethnic cleansing” against the Kurds. The anger of the Kurds has reached a level beyond which the development of the “Syrian scenario” in Turkey - the civil war and the actual disintegration of the country.

As noted by Sergey Manukov ("Expert Online"), the Kurds continue to demand self-government for the southeastern provinces and threaten civil war if the authorities do not cease hostilities.

Interestingly, the Turkish government does not pay attention to the calls of Washington and Brussels about the need to organize negotiations with the Kurds. Recep Tayyip Erdogan said the other day that the government will continue to systematically destroy the militants of the Kurdistan Workers Party (PKK). Erdogan calls them “terrorists”: “Our security forces methodically, one by one, destroy members of a terrorist organization. After their complete destruction, we will bind the wounds and begin a new phase of relations with the population of the southeast. ”

“The situation has reached a critical level,” the American diplomat quoted the Wall Street Journal, asking not to give his last name. “It’s not clear how this will end.”

As the analyst recalls, the leaders of the pro-Kurdish parties represented in the Turkish parliament turned to Russia for help. Selahattin Demirtas, the leader of the Democratic People’s Party, the country's second-largest opposition party, held talks in Moscow with Russian Foreign Minister Sergei Lavrov. It is known that in an interview with the agency “Firat” he accused the ruling Justice and Development Party of conducting repressions.

Some Russian observers draw parallels not with Syria, but with the Donbas.

“According to some estimates, up to 20 million Kurds live in Turkey. However, in South-Eastern Anatolia (Southeast Asia) they live compactly. More than 60% of this region are Kurds, and about a quarter of the country's Kurds live in total (much like Donbass), ”writes Ivan Zatsarin ("But").

And one more similarity: the Kurds in the region demand Ankara self-government. And the government probably fears that autonomous status will become a prologue to the proclamation of independence. Bottom line: instead of self-government, the Kurds got a sweep.

As for Demirtash’s visit to Moscow, his brother participated in the defense of the city of Kobani against the IS militants. Turkey refused to intervene in the situation, in fact, pushing the Kurds, who had watched the IG cracking down on the tribesmen, on the “war path”. Now Turkish Kurds are fighting Islamists, and what will they do next?

The analyst recalls that Demirtas "officially" came to Moscow to establish a political dialogue and to open the Society of Kurdish businessmen: the fact is that, as citizens of Turkey, the Kurds came under Russian sanctions on general grounds. “Almost simultaneously with the visit of the Turkish politician in the government, the activity of manual regulation of the sanctions regime is noted,” writes a columnist. “It can be assumed that the installation arrived as much as possible to remove the Kurdish business from the sanctions”.

Known and informal assumptions - for example, that the main goal of Demirtaş is a request for Russia's help to the Syrian Kurds.

Experts of the American Stratfor think tank believe that Russia knows: by supporting the Kurds, it weakens Ankara. According to analysts, which leads PanARMENIAN.NetThe participation of the “Democratic Union” in the negotiations may eventually lead to the creation of Kurdish autonomy in the north of Syria. And this autonomy will be "an excellent bastion for the preparation of shares of the Kurdistan Workers' Party."

Stratfor recalls that Russia has a long-standing relationship with the Kurdistan Workers' Party: in the 1970s, the PKK was started as a Marxist-Leninist organization; later, in 1990, she had a representative office in the Russian Federation, and her leader Abdullah Ocalan, after being expelled from Syria, came to Russia twice, trying to find refuge.

Today, Ankara should be borne in mind at the same time several likely complications. Strengthening the support of pro-Kurdish political forces in Turkey may raise the issue of Kurdish autonomy, which, if it comes to that, is able to support the PKK in actions in Turkey.

As for Russia, Turkey does not succeed in smoothing out the tense relations: Ankara does not want to apologize, and Moscow is pressing back with sanctions. And now it can also push the Kurdish issue.

In any case, let us add from ourselves, from the political cooperation with the Kurds and the “manual regulation” of the sanctions regime addressed to Turkey, the relations between Moscow and Ankara are not warm. The “Kurdish card” in the hands of the Kremlin will definitely provoke, in one way or another, the protests and criticism of the Turkish authorities.

When Russian Foreign Minister S. Lavrov received in Russia the head of the Turkish pro-Kurdish Democratic Party of the People, Selahattin Demirtas, from Ankara came a shout from Prime Minister Ahmet Davutoglu, who "condemned" the visit of the politician. The most serious words were chosen for condemnation.

During the visit to Moscow, reminds RIA News"Demirtaş stated that Turkey should not have shot down the Russian Su-24 and that it was necessary to look for ways out of the crisis in Russian-Turkish relations.

Upon learning of this audacious statement, Turkish Prime Minister Ahmet Davutoglu called it a "betrayal."

“What he called the wrong decision to shoot down an airplane is a disgrace and betrayal,” said Davutoglu. “We in the (Syrian) Kobani helped our (Kurdish) brothers, our same duty is to help the Turkmen in Bayyrbujak.”

Well, about how Turkey “helped” the “brothers” in Kobani, you can not tell, we add in conclusion. Turkish military simply did not participate in the battles for the city. The Kurds themselves, who fought with the militants of “IG”, note that Ankara adhered to the “policy of non-intervention” in the region, and even secretly supported “IG”. Since then, R.T. Erdogan’s reputation in the Kurdish regions of Turkey has dropped below the baseboard. Davutoglu’s statements about helping the “brothers” can only provoke evil laughter in the Kurds.

Observed and commented on Oleg Chuvakin
- especially for topwar.ru
Ctrl Enter
Noticed oshЫbku Highlight text and press. Ctrl + Enter
We are
War in Turkish KurdistanRozhava - the land of the Soviets. How do Syrian Kurds fight and build a new world?
Military Reviewin Yandex News
Military Reviewin Google News
34 comments
Information
Dear reader, to leave comments on the publication, you must to register.