December 29 2015
34
At one time, the Finns gave the world the name not only of Molotov cocktails, which are now universally known as Molotov cocktails, but also of Soviet aviation ammunition. It is worth noting that this name is known today to a much smaller number of people. There is nothing strange about this, Soviet rotationally scattering aviation bombs became history, and the Molotov cocktail is used at present, mainly during mass protests.


23 August 1939, Germany and the USSR concluded a non-aggression pact. According to the secret additional protocol, Finland and the Baltic countries were referred to the sphere of interests of the Soviet Union. From 28 September to 10 October 1939, the USSR was able to sign mutual assistance agreements with the governments of Estonia, Latvia and Lithuania, which provided their territory for the deployment of Soviet military bases on it. The government of Finland refused to create Soviet military bases in the country. And the negotiations in Moscow in October-November 1939 on the transfer of the border from Leningrad to 90 kilometers and the transfer of the USSR on lease to the 30 years of the Hanko peninsula for the construction of a naval base by the Finnish government were rejected.

The Soviet political and military leadership, apparently, was almost completely confident that the Finns would agree to concessions and accept the proposals of Moscow. This may explain the fact that the intelligence information possessed by the Soviet military command was very fragmentary and inaccurate. The Red Army knew little about the quantity and quality of Finnish fortifications on the Karelian Isthmus, the composition of the Finnish army and its combat capabilities were incorrectly identified. The Soviet leadership was preparing for a light military campaign, relying on absolute superiority in military equipment and armament, but reality put everything in its place, turning at the initial stage of the war with a series of painful defeats of Soviet troops that suffered heavy losses in men and equipment. 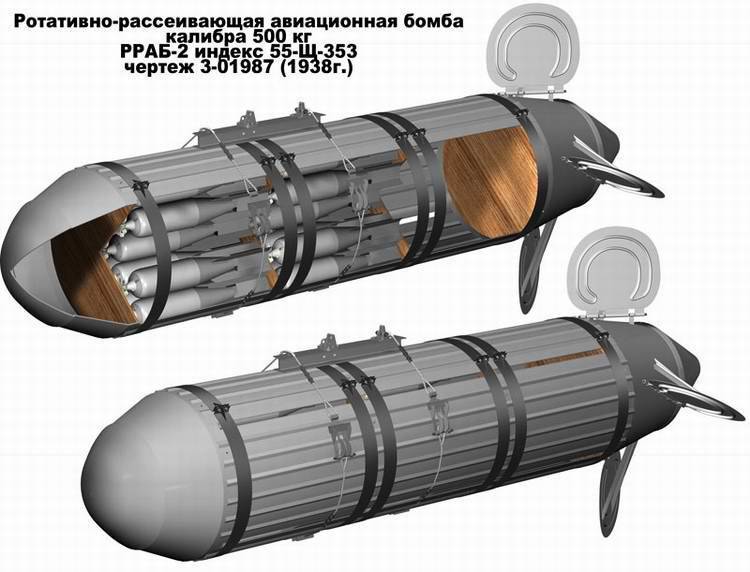 In general, the war that lasted from 30 in November 1939 of the year to 12 in March of 1940 of the year ended in victory for the USSR, but it was decided to abandon plans to create the Finnish Democratic Republic (FDR), whose leadership was formed from members of the Finnish Communist Party. Finland has maintained its independence. At the same time, the Finns lost 11% of their territory, which became part of the Soviet Union (including the second largest city of the country Vyborg), and 430 of thousands of Finnish residents were forced to move from the front line into the country, leaving all their property.

In the USSR, the theme of the Soviet-Finnish war, which in Finland is known as the Winter War, had been silent for many years. She was reluctant to talk about her and tried not to remember, primarily because of the heavy casualties suffered by the Red Army. Soviet writer and journalist Alexander Tvardovsky, in his piercing poem Two Lines, directly called that war unknown. This unknown war gave the world the "Molotov cocktail" and the "Molotov breadbaskets", which were so named in honor of Vyacheslav Molotov, who at that time held the post of Commissar for Foreign Affairs of the USSR.

Already 30 November 1939, the first time Soviet bombers bombed Helsinki for the first time, photographs of the destruction in the city quickly spread around the newspapers around the world. According to official information from the Finnish side, 956 people died during airstrikes and bombardments in Finland (including the capital of the country), 540 people were seriously injured, and about 1300 were light. Also 256 stone and about 1800 wooden buildings were destroyed. 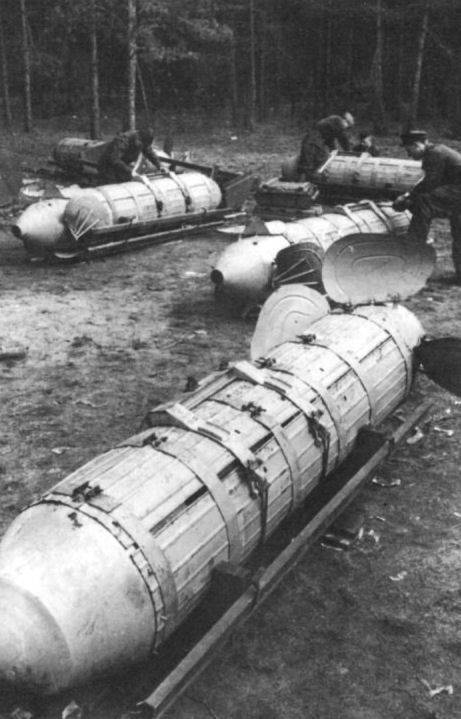 During the raids, Soviet aircraft used new bombs RRAB (rotary-dispersing aerial bomb) of three modifications. Rota-dispersing aerial bomb - was an aviation ammunition for the mass use of small-sized aerial bombs, was an early version of a cluster bomb. The rota-scattering air bomb, due to its tail, rotated in the fall, as a result of which centrifugal force caused the scattering of small bombs - fragmentation, high-explosive, incendiary. At the same time, the Commissar for Foreign Affairs of the Soviet Union, in one of his radio speeches during the war, noted that the Soviet bomber aircraft did not drop bombs, but delivered food to the starving Finns. Not without a sense of humor, the Finns almost immediately came up with the name “Molotov breadbasket” for Soviet aviation ammunition of the Republican National Security Bureau. It is worth noting that the RRAH buildings really did resemble the most ordinary breadbaskets, only bakery products were kept in them.

The Soviet fighters could also joke about this. RRAB equipment of all three types required a lot of time. Each small bomb had to be prepared and placed in a cassette, like lemons or oranges in a box, and in 1000 kg a bomb could be placed more than 100 pieces. If the flight was canceled for some reason, they had to be discharged as much time. The Red Army men, sharp in language, invented their decoding for RRAB - work, work, but to no avail. Although in general, the effectiveness of this weapons they did not doubt.

Soviet bomber aircraft used 1939-1940 for the 250 war during the war, the RRAB-3 kg, the 500 kg, the RRAB-2 bomb, and the 1000 kg, RRAB-1 bomb. Most often, bombs RRAB-2 and RRAB-3 were dropped from airplanes. These suspension containers were used not only during the Soviet-Finnish war of 1939-1940, but also during the Great Patriotic War. They were filled with various amounts of smaller fragmentation ammunition: AO-8, AO-10 or AO-20, as well as incendiary small-bombs ZAB-25. RRAH carriers were Soviet bombers TB-3, DB-3, and later Il-4 and Pe-8. 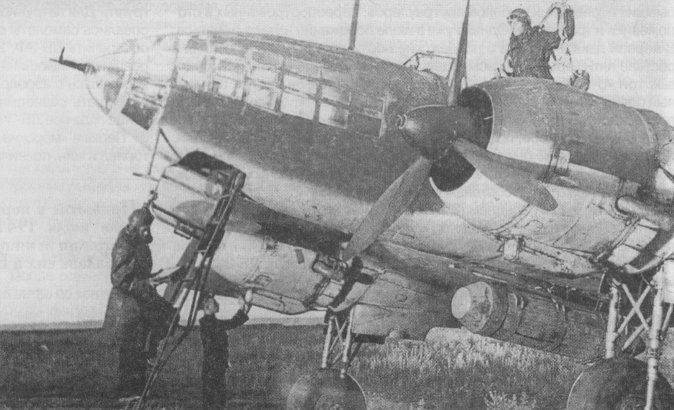 AO-8, AO-10 and AO-20 fragmentation bombs were artillery shells (caliber from 76 to 107 mm), to which the box-shaped stabilizer was simply welded. The main striking element of these bombs were fragments of their hull. This type of ammunition was intended to destroy manpower, unarmored and lightly armored equipment of the enemy. The incendiary ZAB-25 aerial bomb was designed to hit buildings of both urban and rural types, railway stations, hangars, crops during the dry season, etc. by fire. Her corps was a regular chemical bomb corps - HUB-25, which was filled with kerosene or oil and cotton ends. An explosive cartridge with a pyrotechnic composition was placed in the pilot glass.

The use of cluster-type aviation bombs made it possible to achieve the highest level of the size of the affected area by shrapnel. The prototype of all modern cluster aviation munitions became precisely the rotative-dispersing aerial bombs of the 30-40-s of the last century. All RRAB of three calibers used by Soviet aviation had approximately the same design. Tail and head fairings RRAB were made of sheet steel (thickness 1 mm), and the cylindrical part was 4 sash of corrugated steel (its thickness was 1,25 mm), curved in an arc of a circle with a diameter equal to the diameter of the bomb. To ensure the bomb's carrying capacity and strength, transverse and longitudinal force elements were used. The working volume inside the RRAB bomb was divided into several compartments (3-4) with the help of partitions made of plywood, bombs of various calibers were placed in these compartments - submunitions already described above.

Each compartment of the equipped "Molotov breadbasket" was tied with 2-4 with explosive rings - grooves with a weakened section. After being dropped from an aircraft, such an aerial bomb began to rotate at high speed due to the installation of a special type tail assembly on it — at an angle to the longitudinal axis (approximately 45 °). At that moment, when the angular velocity of the rotation of the bomb reached a certain critical value, there was a natural destruction of the tensile breaking rings under the influence of inertial forces, after which the combat equipment was scattered over a large area. 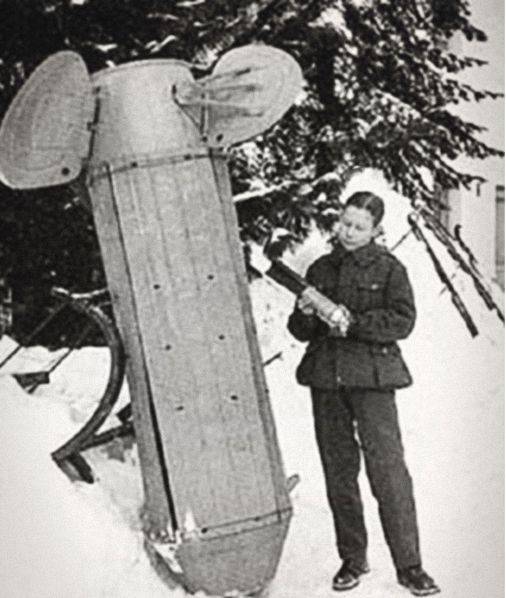 The modern version of the domestic cluster-type aviation bombs is called RBC - one-time bomb cassettes. They are made in the dimensions of standard high-explosive air bombs in caliber from 100 to 500 kg and have a thin-walled case, in sections of which there are various submunitions - small caliber bombs.

Consequences of the bombing of Helsinki in 1939 year, photo sa-kuva.fi 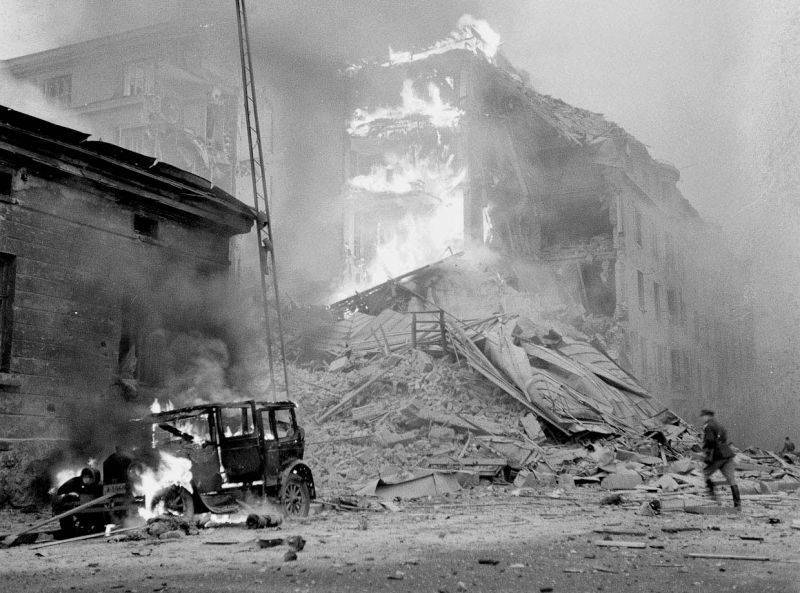 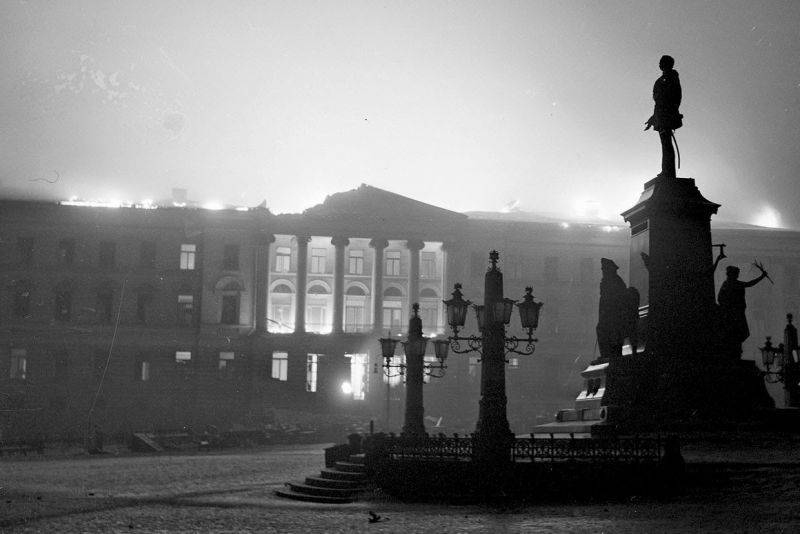 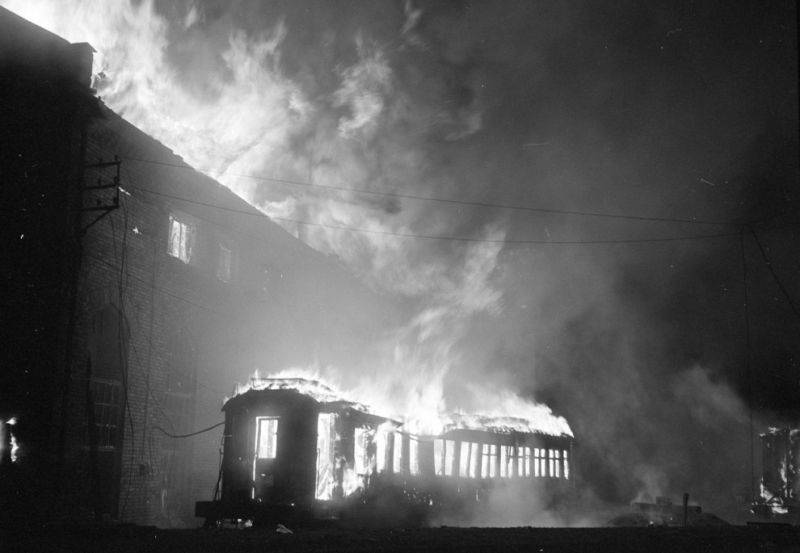