December 29 2015
23
The film “World Order” by V. Solovyov and his discussion in the studio raised a number of really important questions. 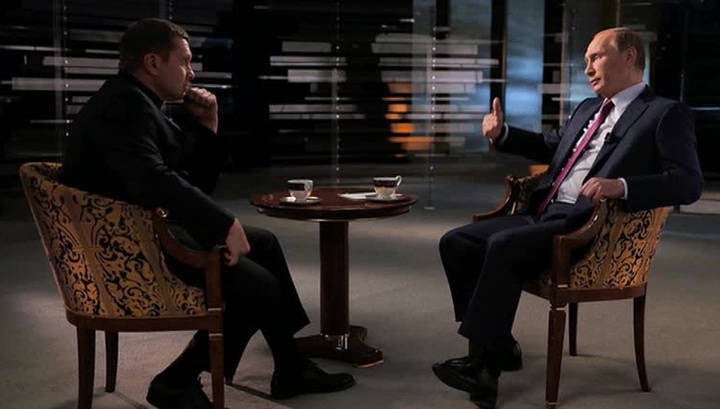 However, we must rely on the worst. US humanists have already dropped two atomic bombs on Japan in 1945 year, preventively, more as a deterrent to the USSR, and over the past time they have not become better. Another question belongs to Karen Shakhnazarov: “Is it on the right side stories we are? Where is she, this side? ”

What has changed in the world in the past 2015 year? The world is clearly set in motion. Russia began to defend its interests not only at the borders of the country, in Ukraine, but also abroad - in Syria. And successful. It turned out that the world leader of the United States is not omnipotent, and Russia is very much alive, and can hold the blow of the world hegemon.

However, Russia is moving away from the main battle, giving hybrid battles in the Crimea, in the Donbas. On the advice of Brzezinski, Washington began deploying military contingents, armaments and headquarters in the Baltic and Eastern European countries, surrounding the Ukrainian geopolitical theater, and Russia moved its main efforts to Syria. For Washington, this turned out to be a complete surprise, a new “Crimea” ...

In the outgoing year, the European Union began to collapse. The ramps here are England, intent on holding a referendum on secession from the EU in 2016, and Poland, in which radical nationalists of the PiC Party of Kaczynski came to power, and immediately began to behave provocatively in relation to Brussels. By the way, they are the privileged allies of the United States in Europe, and perhaps they simply know something more about Washington’s plans, in particular, about its Trans-Atlantic partnership policy.

The European Union defends its interests in this partnership, and it seems that the United States is fed up with it. And they decided to transatlantize the European Union in pieces, so much easier to digest food. The third American ram can be the Bandera and pro-American Ukraine, which has just been successfully Euro-associated. Against the background of the invasion of Europe by migrants, the chances of Brussels to save the European Union look increasingly slim.

The emergence in Europe, with the support of the United States, of already two ultranationalist regimes, in Ukraine and in Poland, is of great concern. Europe can take the path of neo-fascism, provoked by the United States. The Ukrainian crisis shows that Washington is itself slipping into a pro-fascist policy, American exclusivity is fully combined with Bandera’s neo-fascism with Hitlerite roots.

Then the collision of the Western and non-Western worlds becomes very likely, and it can develop from the Ukrainian and Syrian crises, or the global financial and economic crisis, which is prompted by a drop in oil prices provoked by Saudi Arabia, an ally of the US ... History in the twenty-first century can repeat a new round of twentieth century ...

Karen Shakhnazarov noted that the world as a whole is being brought up on the images of the US media, it is the main engine of promoting the interests of the United States in a global democratized world, destroying this world. Perhaps for later absorption by the States.

Western Europe, as the closest and culturally close ally, was exposed to the greatest impact of the US media, and therefore was morally destroyed to a greater extent than other regions of the world. As a result, the European Union was unstable, its multiculturalism policy led to the emergence of a cancer tumor of extremism and terrorism in the territory of Europe proper.

In fact, the policy of multiculturalism was dictated not only by humanism and the struggle for human rights. Some European sociologists have made a recent statement, either with a statement, or with blackmail: they argue that countries that limit migration are threatened with depopulation, that is, the demographic crisis, degeneration.

Is it not from this bold statement by the "Chancellor of Europe" Merkel: we will accept everyone! The European Union viewed migrants simply as a cure for degeneration. A rational and cynical approach, but “something went wrong.”

On the other hand, by refusing migration policy, the European Union will have to admit that fundamental democratic “human rights” physically kill the peoples of Europe, because, in reality, these are the rights of homosexuals, degenerates. They do not want to give birth, they want to make careers, culturally relax and decompose - it means that other peoples will give birth, and they have already arrived in Europe. Just do not save, and replace its population.

New Scripture from the World Democracy from the United States - movies, Internet, media. According to their precepts, all progressive humanity lives: they create the mode of life, they teach how to live and die correctly. To live here and now, and death to delay even to senility, for this is the death of consumption, the only meaning of human life in the Western world. This gives rise to a particular fear of the death of a western free individual — deprived of any consolation that any religion gives. And deprives him of courage ...

Migrants come to Europe with their own culture, perhaps a bit “backward”, but real, and it will sweep away the degenerative performance of contemporary European art. Europe is now in a dilemma: either to recognize its “democratic values” as false, or to surrender to the migrants from Asia and Africa ...

There is an opinion that in the USA there is no democracy at all, it is its only export goods. World Democracy, promoted by Washington, is a product of world media, just a secular religion, like European-born communism, no more than the second edition of the communist myth, corrected, dressed in liberal clothes, but considering a person quite Marxist, as the sum of material needs and the world is like a consumer society.

Only on a market basis, that is, instead of the Communist Party - the Brussels, under Washington administration, bureaucracy, oligarchy, in general, plutocracy. Therefore, European democracy has turned out to be political impotent: it cannot today politically defend the interests of Europe.

... It remains to hope that in the USA there will be no "crazy man" that Vladimir Putin spoke about. Such guarantees could be given by Donald Trump, a participant in the pre-election 2016 presidential race of the year. Let's hope that he will become the president of the United States.

Ctrl Enter
Noticed oshЫbku Highlight text and press. Ctrl + Enter
We are
Situational analysis of the death of the MH17 flight (Malaysian Boeing 777), made on the basis of engineering analysis from 15.08.2014Bashar al-Assad: In Syria, not the “revolution” that the enemies are talking about, but the revolution of the army and the people against terrorists
23 comments
Information
Dear reader, to leave comments on the publication, you must to register.