Where did Moorr Yarosh go, or “Renounce the old myth”?

December 29 2015
34
Flashed in the network newswhich should have been seen by many. The former leader of the "Right Sector" Dmitry Yarosh leaves the organization. For most readers, the news is not so hot. Especially since we reported this. Already a month since Yarosh ceased to be the leader of the PS. So, turned into an ordinary, unremarkable deputy of the Rada. Because it is not LGBT, it does not fight with other deputies, it does not rush at journalists. 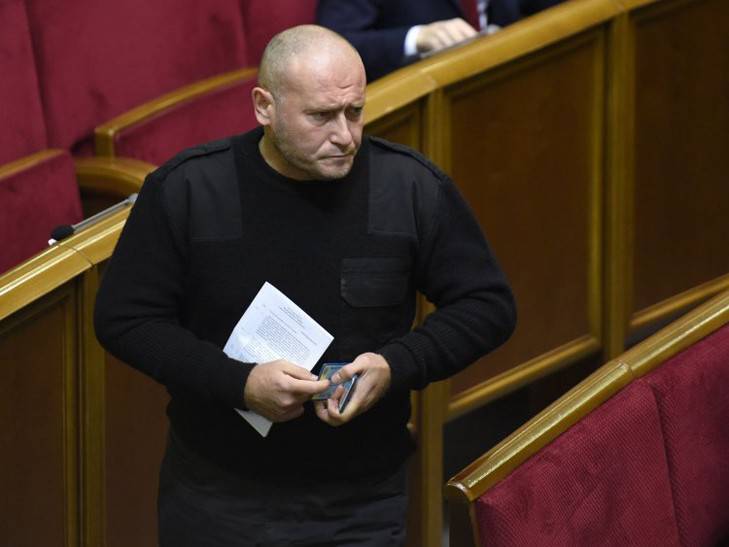 But did this Yarosh stop being the Yarosh that we knew from his deeds?

Definitely early to make a blessed face. Say, if such people come out, then everything ... The right sector has come full out. You can no longer pay attention to all these pravosekov. Sprawled by burrows, wiser. Maybe even calm down.

The hero of the article also pours on such thoughts.

"Now is the time to focus on the development of the state. Our movement has grown, strengthened and moves to a new stage of its development. Now we want to appear not as a narrow-functional, but as a national patriotic movement to unite all the patriots of Ukraine ... Our goal is still building Ukrainian of an independent conciliar state. Our task is twofold: to preserve the existing state as a springboard for obtaining national statehood and to carry out revolutionary changes in it, which will ensure freedom, justice and prosperity for the Ukrainian people. "

There was a radical - and there is no radical. Only not so simple. Behind this man is a fairly large number of people. And not just people, but precisely those who took the most active part in the coup, the subsequent punitive actions in the Donbas, in the blockade of the Crimea. Did these people drastically change their views too? Or buried under the ruins of the Donetsk airport? No, they are next to their leader. And they are still strength.

Statement Yarosh and directed precisely these people. If we discard all the nuances, it turns out very simply. Here, see for yourself:

“I, together with my team, are leaving the Right Sector national liberation movement. We are initiating the creation of a new social and political movement, the founding congress of which is planned for February. We are now working on its development, concept of activity, program principles.”

For those who do not understand, the translation: I and my colleagues create a new patriotic movement, where everyone who supports me is invited. We were, are and will be.

We are sure that former members of the PS are already entering the new organization. Go as a herring to spawn. Shoals.

So why did Yarosh make this trick? What is behind the noble goal of creating a nation state? And why are we so confident in the rapid growth of the new organization?

First of all, the PS has discredited itself. If at the beginning of the events, pravoseki were perceived as the militant vanguard of the “revolution”, as people who are not afraid of death for the Ukrainian people, then participation in the ATO thoroughly undermined this image. The punishers, no matter how much the Ukrainian media glorify them, still understand that they do not deserve respect. Yes, and the current government is tired of having such an organization under the walls of the Rada.

And PS showed its unpredictability long ago. Even when he tried to set fire to Transcarpathia. When the Ukrainian Armed Forces and the Ukrainian NG were forced to conduct a fairly serious operation to neutralize a group of Pravosek.

So, today we have a fairly organized organization that has combat experience and sources of funding, which at any time can not only begin an active struggle with the current government, but also lead this fight. The organization has supporters in all regions of Ukraine. And not passive "voters" who support someone "from the couch." And active, ready to go into battle at the call of their leader radicals.

Plus, do not forget about the fact that now is carefully stored in numerous caches in the Carpathians. Weapon, ammunition, equipment. Written off as a "lost in battle" technique. Not Tanks, thank God, but there is information that the punitive somewhere "lost" after Debaltsev 16 trucks, 2 Humvee and 2 armored personnel carriers. Little? But a lot. And if you organize everything properly, then the numbers can be completely different. In the direction of increase.

In the conditions of constantly worsening internal political situation, the government and the president of Ukraine will do everything to find a way to “wipe” the PS from the political map of Ukraine. The benefit of the forces and means for this today is enough.

Deputies Yarosh went to his advantage. Or he himself, “doper”, or suggested who is among the powers that be this simple thought. Be that as it may, Yarosh made a wonderful move. Sophisticated and beautifully designed

“As before, we don’t give up on the revolutionary path, but categorically deny pseudo-revolutionary activities that threaten the existence of the state of Ukraine and blur the patriots’ reputation. We are in opposition to the current government, but we don’t consider expedient bloody and doomed to defeat riots against it ”

Handsomely? And then ... We do not seem to be for what is happening today in Ukraine, but we will fight by parliamentary methods. Only here is the language ... Everyone since childhood knows the classic "my language is my enemy."

As part of the right sector were not only political organizations. There was still DUK. Who forgot - the Volunteer Ukrainian Corps. Pure military formation with a clear structure and command. DUK submitted to Yarosh personally. And after his resignation, two combatant battalions and a medical battalion declared that the former conductor was personally under command. But behind these warriors in the battles in the Sands, at Saur-Grave, in the Donetsk airport, in Shirokino. So it is not necessary to talk about them in the past tense.

"Therefore, the fifth and eighth battalions of the DUK and the Hospitallers' medical battalion are being reorganized into the Volunteer Ukrainian Army. It will be one of the structures of the new movement we are creating."

Here is the answer to all questions. Why the opposition movement own army? They will fight for power in parliamentary ways.

And the conclusion from all that is happening is one. Yarosh is preparing a new radical organization to replace the Right Sector. An organization that will in every way otbrykivatsya from its roots in the PS. On the contrary, it is quite possible that the new organization will criticize the PS. And even contribute to its ban. And the subsequent destruction.

That is, approximately according to the Turkish scenario of fighting ISIS.

Thus, the radicals, and the government, keep the organization in case of a social explosion. In the current environment, such an organization is necessary as a new one. Not stained with blood in the Donbas and the burning of people in Odessa.

And what about the right sector? It seems that the prakosekam will not succeed in celebrating his second birthday (22 in March). Moor did his job. Now it is not needed. In the form in which it exists, is not needed.

We have long thought about this topic. Where will the Moor go after Mukachevo? Now there is an answer.

Ctrl Enter
Noticed oshЫbku Highlight text and press. Ctrl + Enter
We are
Results of the week. “Unlike everyone else, I went to the army for spiritual reasons.”What is behind the Russian and world propaganda of LGBT?
Military Reviewin Yandex News
Military Reviewin Google News
34 comments
Information
Dear reader, to leave comments on the publication, you must to register.