Russia simply does not know that Turkey treats it well 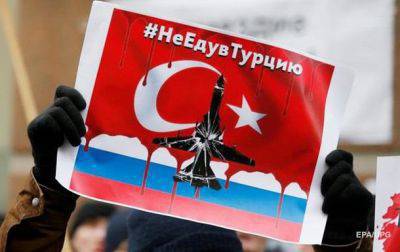 Looking through the Turkish media in Russian, more and more often you come across paradoxical articles. If you do not know the background of the conflict, it seems that this is Russia for no reason, out of love with Turkey. A white and fluffy Turkey is doing everything to sensitize the stupid northern neighbor.

Moreover, today government media are actively promoting the version that it was Russia that went to the confrontation of relations. It is Russia that is to blame for the fact that the bomber was shot down. The Turks just did their job. We defended our skies from possible attacks.

In this respect, the last speech of the Turkish Prime Minister Mevlut Cavusoglu is very significant. He made this statement during a visit to the Russian cultural center in Antalya. The place for such statements.

"After the start of the diplomatic crisis, Turkey did not take any negative steps towards Russia."

"For us, Russia is important. It is our very important partner, and therefore we are patiently waiting for and not taking action."

Like this. Again, Turkey just sleeps and sees when the Russians stop pumping up the situation. Only here it is somehow not entirely clear. When does the minister speak the truth? Yes, and other leaders of the country, too. Of course the level is not the same, but you have to remind.

When the Turks refused to apologize for the downed aircraft, it was Russia who waited a long time. Somehow I didn’t really believe in the stupidity of the Turkish president. It was not particularly believed that the Turks would break the wonderful relations that had developed over many years. Not wait.

And then they got what they were supposed to get. This refers to sanctions from Russia. Considered, I must say, the sanctions. And not only economically, but also politically thought out.

What was the answer of the same Cavusoglu? Sorry? No, even in those realities, the minister began to teach Russia.

"We consider it expedient in the interests of our countries and their future to revise these measures, as well as to immediately cancel them. Otherwise, these economic measures will affect the economies of both countries and will have negative consequences for the Russian people no less than for the Turkish."

If we reject diplomacy, then such a statement should be understood as follows: the Russians should understand that it will be harder for them from these sanctions. We are Europeans. We will be supported. Help us. A sort of second Ukraine. Country, standing on the front line. True, they create this front line themselves. Russia is not interested in this war.

Many then talked about the straits. Turkey will close our fleet in the Black Sea and then the "Syrian" group will remain without supplies. Moreover, even then it was already known about the reaction of some European countries to close the airspace for Russian aircraft.

Many were surprised by Russia's calm response to such statements. Not even calm, but some kind of lazy. None, however significant a politician, expressed concerns on this issue. And why?

Yes, everything is very simple. Close to the straits can not only Turkey, but also Russia. Exactly. Our fleet allows you to do this. And not only Turkey but also NATO cannot oppose something to such a step. Yes, this is a confrontation. Yes, it will be cruel. But ... quite possible.

The Turks understood this. The Foreign Minister immediately announced the position of his government. Simply put, he closed the issue of closing the straits.

"We consider it important that all interested parties avoid attempts to undermine or use the existing Montreux regime for their own purposes."

But even there was a hidden threat. We will be supported. We need the EU, and you do not. We need NATO, and you are potential adversaries.

"Our relations with the EU are developing in the context of their dynamics, regardless of current political events."

And what is Russia? Never mind. Not scared. Moreover, very intelligently responded to the provocations of the Turks. Our ship commanders simply flawlessly "put in place" brazen Turkish "fishermen."

So what? Again the threat towards Russia. And again performed by the Minister of Foreign Affairs of Turkey.

"It was just our fishing boat, I think the reaction of the Russian ship was excessive."
"Russia and Turkey, of course, must restore the trusting relationship that we have always had, but there is a limit to our patience," the minister said. According to him, Russia has already put itself in a foolish position, saying that Ankara shot down a Russian plane trying to protect the oil supplied by the Islamic State (ISIL).

What happened? The insight of the government and the president of Turkey? Or someone from the Europeans hinted to the Turks that it was time to finish this informational picks? Or maybe the "Peace Prize Laureate" from across the ocean demanded a halt?

Nonsense. Everything is much simpler. So much easier that without even knowing history conflict, you can understand everything. Today, Cavusoglu "cares" about the relations of peoples among themselves.

"Unfortunately, negative steps have been taken in Russia towards some of our citizens. I hope that our Russian friends will reconsider the actions taken."

Only the casket just opened. Even the "key" is not needed. The thing is that the previous month for economic relations between Russia and Turkey was more at the state or corporate level. Simply put, sanctions operated for those who are under government control. For large businesses, for pro-government organizations.

But everything confuses the upcoming New Year. More precisely, the New Year holidays, which traditionally many Russians spent on the shores of the Turkish resorts. And what is Russian tourism and who is a Russian tourist, the Turks have studied perfectly over the past decades. And preparing for the arrival of these "spender". And there are no tourists ...

In a country where a huge stratum of the population is fed by tourists, this situation will cause righteous anger by the policies of the government and the president. This means that the situation in Turkey itself will heat up exponentially. The financial losses of entrepreneurs and corporations are already beginning to stir up Turkish society.

There is an opinion that in the near future the situation may move into the active phase. You can expect street riots. Activization of nationalist and religious extremists. And even attempted coup. In a country like Turkey, it is quite real.

Under these conditions, the Ministry of Foreign Affairs of Turkey will do everything to achieve the abolition of Russian sanctions. And it is possible, although it’s impossible to be confident in this until the end, we will hear the Turkish President’s speech with an apology for the downed bomber.

But whether the Kremlin will go for the lifting of sanctions is a big question. The East, of course, is a delicate matter. But Russia is not easy. We have half the territory east. So the "subtlety" is not so easy to take. And by "obstinacy" the Russians will not yield to anyone. Even the Turkish president.

Ctrl Enter
Noticed oshЫbku Highlight text and press. Ctrl + Enter
We are
Results of the week. "In the Greek Hall, in the Greek Hall ... the mouse is white!"Situational analysis of the death of the MH17 flight (Malaysian Boeing 777), made on the basis of engineering analysis from 15.08.2014
Military Reviewin Yandex News
Military Reviewin Google News
107 comments
Information
Dear reader, to leave comments on the publication, you must to register.