January 5 2016
5
In the middle of 1944, the newest self-propelled self-propelled unit M19 Multiple Gun Motor Carriage, armed with two 40 mm automatic guns, was adopted by the US Army. By the spring of next year, the serial construction of this equipment began, which lasted until the end of the Second World War. The tests that took place in 44 showed that the new machine has sufficiently high characteristics and can solve the tasks with high efficiency. In addition, over time, there were proposals to develop some new machines based on M19.


Already in the winter of 1945, it was proposed to increase the firepower of an anti-aircraft installation by radically processing its weapon system. February 1, the military department ordered the development of a new weaponry version of the M19 ZSU to begin. It was proposed to increase the combat characteristics by a significant increase in caliber, as well as by using a promising high-explosive high-explosive fragmentation projectile. By the time such proposals appeared, American specialists were able to develop a relatively compact 75-mm projectile with a new fuse, in addition, work was underway to further reduce the size of new equipment and create smaller-sized ammunition. These features of current projects had a great influence on the creation of a modernized self-propelled gun.

The order to develop a modification of the ZSU M19 was signed on February 1 1945 of the year. In accordance with this document, the defense industry was to mount a T19 gun mount with an 18-mm T75 gun on the M22 machine chassis. In addition, it was required to create an automatic loader, providing the rate of fire necessary for hitting aircraft. 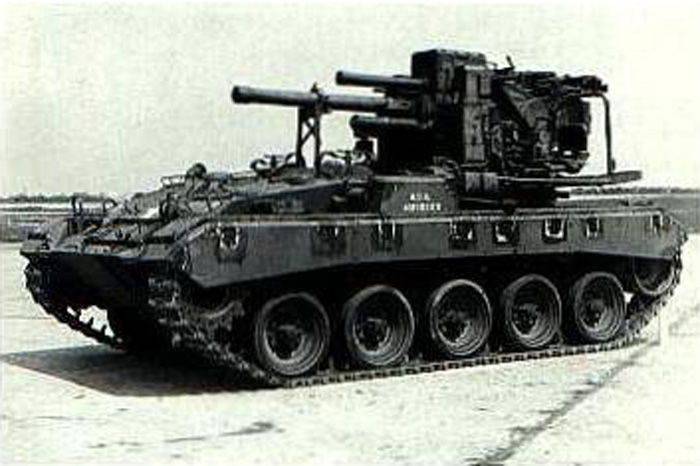 General view of the ZSU with a gun T22

The new project, as far as is known, did not receive its own designation. In the available sources, it is referred to as “T75 22-mm cannon carrier”, “T22 self-propelled gun”, etc. In addition, the name M19 Modified is found (“Modified M19”). Apparently, the project’s own designation was indeed absent for some reason, because of which various “substitutes” were used, reflecting the essence of the development.

As the basis for the promising ZSU, the self-propelled chassis of the M19 MGMC was selected, which by the beginning of 1945 was put into series. This chassis had a number of characteristic features that made it possible to use it as the basis for new armored vehicles. First, it was based on the design of the lung tank M24 Chaffee and was as much as possible unified with it that could provide comparative simplicity of production and operation. The second advantage of the chassis was the layout with the aft arrangement of the epaulet for the installation of the tower, which was planned to be used in the new project.

It should be noted that since the 1943 in the USA, the Light Combat Team program has been implemented, the purpose of which was to create several types of light armored vehicles for various purposes based on the M24 tank chassis. Thus, a promising anti-aircraft self-propelled gun with a T22 gun, in case of successful completion of the project, could replenish the list of samples of this family that reached the troops. 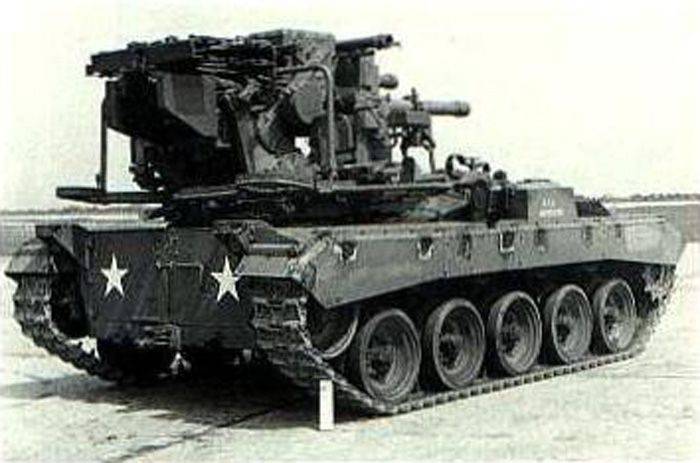 View of the stern

Recall, M19 was based on the design of the light tank "Chaffee" and had a layout characteristic of the American self-propelled guns of the time. In front of the case there was a transmission compartment, behind which there was a control compartment. The middle part of the hull stood out for the engine, feed - for the fighting compartment. In the case of the ZNU M19 in the stern, a free volume was provided with a shoulder strap for mounting the tower on the roof. The hull was welded from armor plates up to 12,7 mm thick, which made it possible to protect the crew and units from small-arms bullets. weapons. Most of the body armor consisted of rolled sheets, but there were several cast parts.

In the middle part of the case, there was a dual installation of Cadillac 22T24 gasoline engines with 110 horsepower. each. With the help of a cardan shaft, gearboxes, etc. the torque of the two engines was transmitted to the transmission located in the front compartment. Through a manual transmission and other units carried out the rotation of the front drive wheels. Tracked chassis ZSU M19 MGMC unchanged borrowed from the base tank M24. She had five pairs of road wheels with a torsion bar suspension and additional shock absorbers on four pairs.

On the aft hull of the hull it was proposed to mount a new open platform with a gun mount. As a basis for the platform, they took the base ZSU tower, which, in the course of the modifications, lost the front, side and aft protection, fixtures for automatic guns and other units used in the initial configuration. In fact, only the platform with attachments for mounting on the body remained from the base tower. 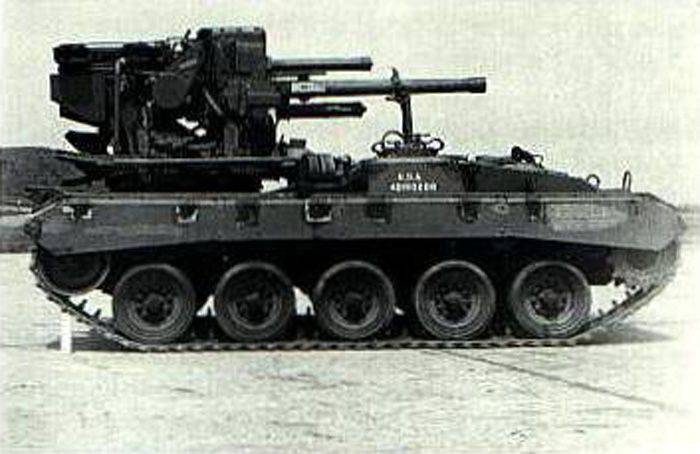 A T18 type gun mount, designed for use with relatively large and heavy cannons, was placed on a rotary platform with the possibility of a circular pickup. In accordance with the requirements of the customer, the installation was additionally equipped with automatic recharge systems. Thus, in the center of the front of the T18 installation, the T22 gun was mounted, and in the back, next to the breech of the cannon, were the main mechanisms of the automatic loader.

The main armament of the ZSU M19 Modified has become a promising gun T22 caliber 75 mm. The gun was equipped with recoil devices, and the installation design of the T18 allowed the elevation angle to be set within sufficiently large limits. A characteristic feature of the proposed weapon was the use of a unitary ammunition with a projectile equipped with a radio fuse. The latter, as conceived by the developers, was to undermine the warhead of the projectile when approaching the target at a given distance. Due to this, it was planned to significantly improve the efficiency of the fire in comparison with existing fuses based on the so-called. remote tubes.

According to reports, the gun T22 equipped with automatic loader original design. Behind the cannon, above its breech and near it, there were special mechanisms designed to move the shells from the store (or mounted on top of the cassette) to the discharging line. Automatic loading for their work used the momentum recoil. When the barrel rolled back, the spent cartridge was extracted and part of the operations for the delivery of a new projectile. The calculated technical rate of fire of the system used reached 40-45 rounds per minute. 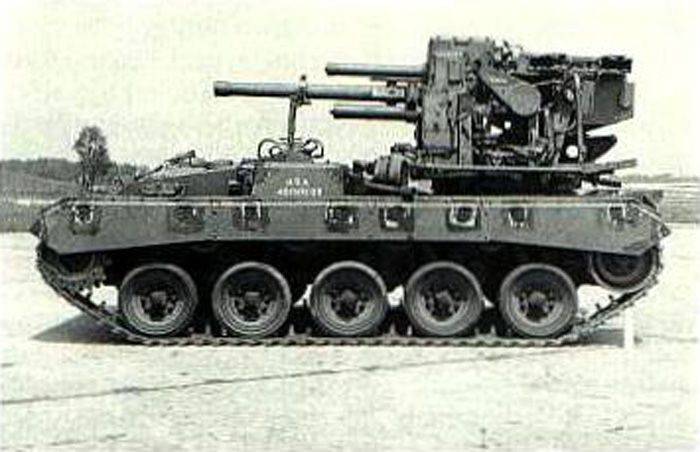 Exact information about the type of sighting devices is not available. Apparently, the new anti-aircraft self-propelled gun received units similar to those used on other machines of similar purpose.

The self-propelled crew consisted of four people. The two, the driver and his assistant, were to be located in the control room in front of the hull. Places of two more, the commander and the gunner, located on a turntable, on the sides of the gun. Their duties included searching for targets, pointing the gun, firing and reloading.

The use of the existing chassis borrowed from the M19 MGMC ЗСУ has greatly simplified the construction of a new type of experienced car. During the assembly of the first prototype, an existing type of serial machine lost the existing turret, instead of which they installed a new unit with a 75-mm gun. Design work and construction of a prototype lasted for about a year. Tests of the prototype began in February 46-th. 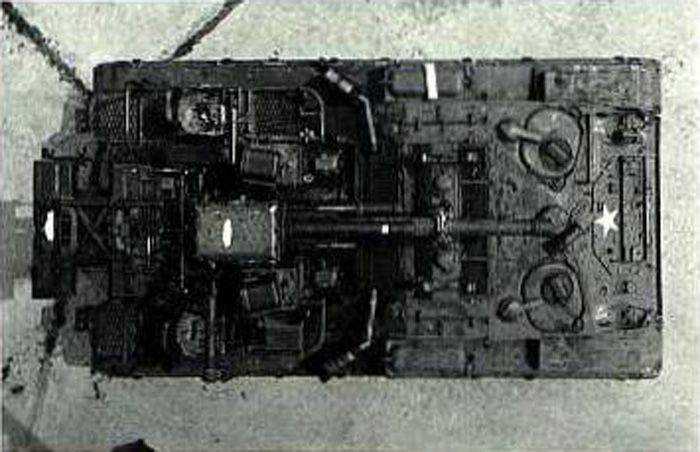 Like many other American armored vehicles of its time, the new anti-aircraft self-propelled unit was tested at the Aberdeen range. Already during the first inspections, certain problems were identified, which eventually led to a serious delay in testing and the project as a whole. Checks, improvements and new tests, after which the project had to be changed again, lasted more than two years - until June of the 1948 year.

The use of ready-made components, such as the existing gun and the serial chassis, greatly simplified the assembly of the prototype machine, but led to some problems. In addition, summed up and specially designed units. So, shortly after the start of the test, problems were discovered with the design of the automatic loader. This system worked well in the horizontal position of the gun and could provide the required rate of fire. However, when attempting to raise the barrel for firing at conventional air targets, the automation refused.

Because of such problems with automation, the promising ZSU, despite its purpose, could fire only at ground targets and only direct fire. Naturally, in this form the self-propelled gun did not meet the requirements, and its refinement was required. In the future, active work was carried out to correct errors in order to ensure the correct operation of automation at any angles of guidance. However, much success in this matter was not achieved. 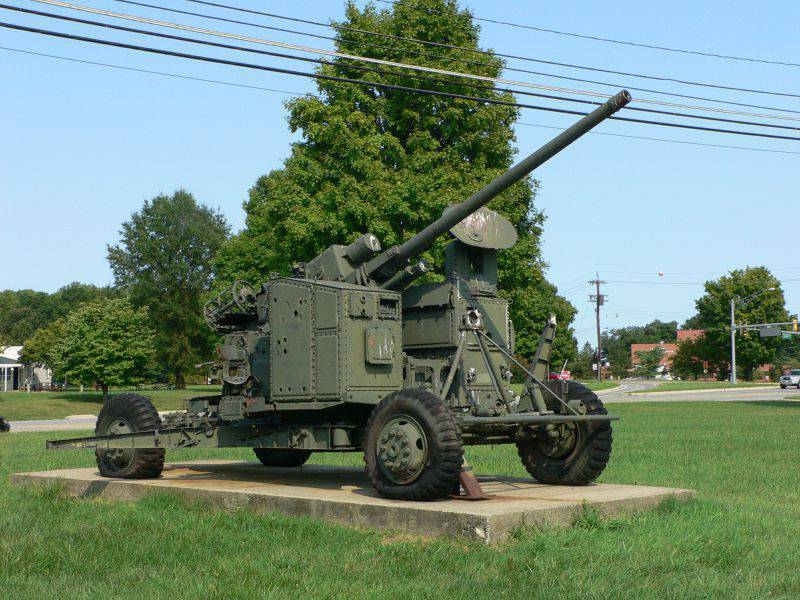 Later, during the commissioning of the automatic loader, another serious problem was revealed, this time related to the chassis design. It turned out that the natural frequency of oscillations of some suspension elements coincides with one of the variants of the rate of fire. Thus, while firing a burst, the gun could create vibrations that could lead to the destruction of individual suspension elements. For obvious reasons, without solving this problem, a new combat vehicle could not get into the troops.

After identifying the negative impact of automatic firing on the suspension, it was decided to abandon the further development of the project. In addition, problems with the automatic loader also affected this decision. After more than two years of testing and refinement, the promising ZSU retained two fatal shortcomings at once. The correction of these problems required time and additional efforts, which is why they were considered unnecessary and inexpedient.

In the middle of 1948, all work on the project of a new anti-aircraft self-propelled unit based on the M19 MGMC machine was terminated. The only prototype disassembled as superfluous. In the future, the used chassis could be used for the construction of new experimental machines. According to the test results, it was decided to abandon the creation of the ZSU with an 75 mm caliber gun on the existing chassis. Nevertheless, the developments on the project were not in vain. By the beginning of the fifties, it was possible to correct all the shortcomings of the proposed automatic loader, which opened the way for new projects. On the basis of the existing developments, the M51 Skysweeper towed anti-aircraft system with an 75 caliber mm was created. The M51 system was produced in series and for some time was in service.