December 29 2015
195
The other day, the community of "Slavoukrainian" patriots received a hefty impulse and cause for shouting. The reason was the statement of "Ukroboronprom" on the development of a "completely new self-propelled artillery mount based on tank "Hold". 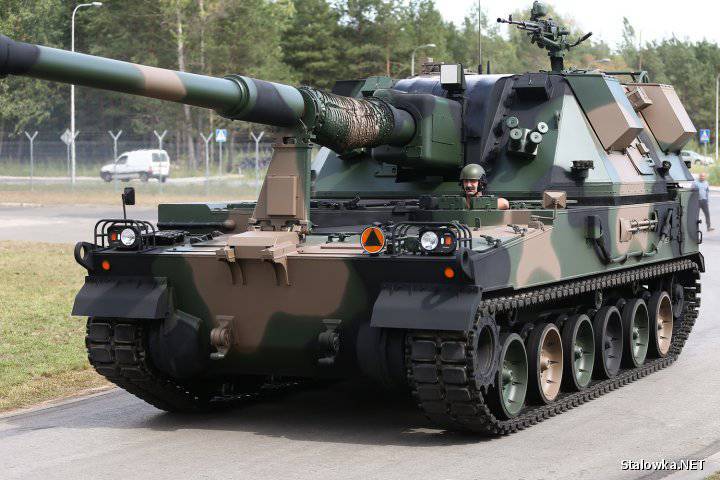 The main feature of the new weapons will be a powerful 155-mm howitzer, produced by one of the NATO countries. Germany, if specifically.

In "Ukroboronprom" seriously believe that this will allow the Ukrainian army to gain an advantage during artillery duels in the war in the Donbass. If we translate from Ukrainian to generally understood, then in the coffin we saw all these Minsk papers there, we must prepare for a serious war.

The noise was serious, shouting in the networks as if in January these wonderful cars would take up positions near Donetsk. However, the reality is somewhat less beautiful.

Everything would be fine, but the details of this project cause (however, as always in the Ukrainian topic) a slight surprise and bewilderment.

However, not the dimensions cause the greatest surprise, and the motor layout. In "Oplot" it is a classic, that is, the engine is located in the rear. And at PzH 2000 ahead. And how this problem is thought to be solved at the XTZ is not clear at all. About such difficult issues as the recoil momentum, which is uniquely different for a tank and an ACS, I just keep silent.

But if they took up the task, apparently, there are ideas. Here, if you look a little ahead, it is not the result that is important, but the process. For the presence of the process implies financing, which means, at a minimum, a salary.

But let's look a little further. And then we have what? Right, shells. The "German" caliber NATO. 155 mm. Ukraine still sits on the Soviet 152 mm. What will shoot in case of successful gash?

"Everything depends on the needs of the Armed Forces of Ukraine, if they order a large quantity of ammunition, then it will be more profitable for us to deploy our own production. If in the near future only a few dozen of such systems will be supplied, then it is more profitable for us to buy shells abroad. In any case, after the emergence of sustainable needs will be decided on the issue of its production. "

Right here, everything becomes clear and understandable. "Only a few dozen systems" means that shells will have to be purchased. As well as the howitzers themselves. The issue of financing arises in all its glory.

And the matter is not only in money. The point is the possibility of setting up the issue. Quietly and almost imperceptibly, the message about the unilateral termination of the contract for the supply of "Vouchers" to Thailand has slipped.

In 2011, Ukraine won the tender for the supply of 49 machines of the Thai army. The contract expired in December 2015. At the tender, “Oplot” successfully overcame both T-90C1, and Chinese “Type 95”, and “Abrams”. But for 4 of the year, the army of Thailand received as many 6 (SIX) machines.

Who said that in Thailand there live simpletons who can hang buckwheat or rice noodles on their ears for several years? The reaction is quite adequate, since the prospect of ever getting the ordered tanks naturally ordered to live long. As Ukraine “forgives” to all whom it owes, everyone has already seen for a long time. And every day less and less willing to be convinced by personal experience.

One more example. In December of this year, Pakistan announced its intention to hold a tender for the purchase of 200 tanks for its army. Naturally, Ukrainian manufacturers rushed headlong to participate in the tender. 200 tanks - this is not a comic order, it is a lot of money.

It is strange, but for some reason, the Pakistani military gently, but at the same time, lucidly made it clear that participation in the “Oplot” competition is not supposed. Pakistan needs tanks, not a process. To attack the Thai rake in the form of cheapness "Oplota" compared with colleagues from Russia or China and failure to receive the ordered? Alas.

Really produced and delivered in time by the T-90 or "Type 95", albeit more expensive, Pakistanis seem to be a more promising option.

Such are the battlegrounds of the Ukrainian defencists.

Yes, the headlines of the articles in ukroSMI were simply screaming: “The army of Ukraine will receive the latest NATO self-propelled howitzer based on the Oplot tank !!! Fear and tremble all! Especially Donbass and Russia. Everyone, like, we will win.

And so very little: Ukroboronprom announced the development of a completely new self-propelled artillery unit based on the Oplot tank.

Here are the keywords: "announced the development." About the time when the miracle weapon will throw thunder and lightning on the heads of the residents of Donbass, not a word. Not a word.

From here, only one conclusion can be made. The coming years 10 can all sleep peacefully. Wonderful howitzer will be developed. And if it is developed as quickly as the Oplot and Bulat, then the question for whom it will be used and in which army remains open.

And at the end historical analogue. 70 years ago, one activist also promised to defeat everyone with a “miracle weapon” if not tomorrow, then the day after tomorrow for sure. Doesn’t resemble anything? That reminds me.

"The NATO standard 155-mm howitzers are significantly superior to existing and even planned Russian developments. Shells of the new Ukrainian artillery will be able to fly farther and have more destructive power than Russian-made 152-mm and 122-mm artillery systems.
So, a self-propelled MSTA-S, caliber 152-mm shoots only 25 kilometers, while the German 155-mm artillery system PzH 2000 - 30 kilometers. "

"The new howitzer will allow the Ukrainian troops to fire at a range that will not give the enemy a chance to strike back. So, it will not only save the lives of our soldiers, but also significantly increase the effectiveness of Ukrainian artillery."

The whole question is when? Will there be a Ukrainian army at all, and I would not have looked so far with Ukraine either. Although an optimist like, but not as much ...

And the last. I understand the joy of all the glory of Ukrainians on the subject of peremoga "Germans" over our "Msta", but my dear, are you talking about the "Coalition" that you did not hear at all? And she is ...