The stranglehold of sanctions is delayed 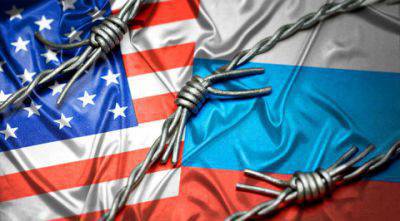 The US Treasury Department introduced new sanctions against Russia. 34 was extended to the extended list of individuals and legal entities, including subsidiaries abroad of VTB and Sberbank. Concerns “Aviapriborostroenie”, “Oboronprom”, “Rosoboronexport”, “Yandex.Money”, the wine-making company “Massandra”, Yalta Film Studio and other companies also turned out to be undesirable to Washington.


As the "BBC"The US Treasury Department has published a list of Russian companies against which sanctions are being imposed because of the conflict in the east of Ukraine.

The expanded list includes VTB24, subsidiaries of Sberbank abroad, the company, the Yandex.Money payment system (75% of whose shares belong to Sberbank). The black list included companies and banks operating in the Crimea, as well as those related to the current defendants in the previous list: Krayinvestbank, Inresbank (connected to the SMP bank of the Rotenberg brothers), Mosoblbank, Technopromexport, Volgogradneftemash and others.

The Russian Helicopters holding company, the United Engine Corporation, the Tekhnodinamika holding, and the High-Precision Complexes NPO came under sanctions.

The sanctions also pleased the representatives of the “republics” in the east of Ukraine, including Vladislav Deynego and Alexander Kofman.

“It is extremely important that Russia take the steps necessary to fulfill its obligations under the Minsk agreements and ensure a peaceful resolution of the conflict in Ukraine,” "Vedomosti" Statement by the Director of Foreign Assets Control (OFAC), US Department of the Treasury, John Smith.

However, the devil is not so bad as he is painted.

The September 2014 sanctions against Sberbank applied to Sberbank-controlled companies with a share of direct and indirect ownership of 50 or more percent. This was said to Vedomosti by the press service of Sberbank. Therefore, the inclusion in the sanctions lists of controlled companies belonging to the Sberbank Group does not change the scope and legal force applicable to Sberbank sanctions.

As for VTB, the press service of the bank said that the sectoral sanctions of the United States will not affect customer service: “Firstly, the sanctions relate solely to raising funds by Russian state banks abroad. The business model of "VTB 24" is determined by the independent funding and versatility of the product line. VTB 24 attracts funds exclusively on the Russian market. Secondly, all accounts of our clients are located in the territory of the Russian Federation, no restrictions can be applied to them. The same applies to plastic cards: no restrictions on their use are introduced in the Russian Federation or abroad and will not be introduced ”.

By the way, the journalists of the newspaper Vedomosti came up with an exact title for their material: “The new sanctions against Russia turned out to be old.”

Why does the United States extend sanctions in such a strange way?

By expanding the blacklist, Washington is showing determination. The White House intends to seek Russia's respect for the sovereignty of Ukraine, said the US Treasury Department. Washington sees no reason to whip up the situation in expanding the sanctions list. “This is a normal process, as legal entities find ways to circumvent the restrictions and try to get out of the sanctions. In order to increase the effectiveness of our (restrictive) measures, we periodically need to clarify the list in order to preserve the effectiveness of these measures ", - cite "Vesti" the press secretary of the US Embassy in Russia, William Stevens.

According to the press secretary, the new list is a way to strengthen the implementation of measures taken earlier.

The Kremlin has already commented on the “normal process,” which was reported at the American embassy.

The Kremlin called the decision of the US Treasury Department unfriendly and destructive. “This is a continuation of the line that has a devastating impact on bilateral relations,” the press secretary of the Russian president, Dmitry Peskov, quotes. "Lenta.ru".

Peskov said that Moscow would respond to this step: “Of course, based on the principle of reciprocity, the Russian side will first analyze these decisions, and then proposals for possible countermeasures will accumulate.”

Earlier, 1 December 2015, the Council of the European Union decided to extend the sanctions against Russia until July 31 2016. This decision entered into force on December 22. True, some European diplomats do not rule out that the sanctions were extended in full for the last time: some EU states want to start a dialogue with Russia on countering terrorism, including in Syria, where the Russians inflict airstrikes on IG positions.

However, the position of Europe is not independent. Europe looks into the mouth of the overseas hegemon. And he adheres to the concept of “containment” of Russia adopted last year.

The dynamics in relations between the United States and Russia is observed only in the Syrian issue, says Alexei Pushkov, chairman of the Duma committee on international affairs.

“Nothing fundamental has changed in US foreign policy. There is a movement in Syria, there is nothing outside Syria, ”the deputy quotes Interfax-Azerbaijan.

But a special point of view. Vladimir Zharikhin, deputy director of the Institute of CIS Countries, member of the Council for National Strategy, says that the reaction of Russian officials to American news shows a lack of understanding of the American political mentality.

“Not all of our leaders understand that the United States towards Russia does not pursue a“ package ”policy. Washington is ready to cooperate with Moscow where it is profitable for it, but at the same time it does not carry out any exchange. This is a principled position of the United States ", - explained Zharikhin Reedus.

Someone in Moscow expected that Russia's participation in the Syrian antiterrorist coalition in Syria would lead to Kremlin getting “bonuses” in Ukraine? If so, then these people are "seriously miscalculated."

And this disappointment, Zharikhin notes, explains the inadequate response of other Moscow politicians. For example, the first deputy head of the “Fair Russia” faction in the State Duma, Mikhail Yemelyanov, suggested hitting the Pepsi and Coca-Cola business: raising excise taxes on the sale of sweet carbonated drinks.

This is from the series "in the garden of an elder, and in Kiev, uncle," said Zharikhin. After all, cooperation in the fight against IG is in the interests of both Russia and the United States. But does this have to do with sanctions? Moscow simply cannot understand, the analyst believes that sanctions were imposed for other reasons. And these reasons did not disappear, even if the White House and the Kremlin found a common language in another region.

Introducing the “old” sanctions, we add, Washington shows Russia directly: 1) The Ukrainian crisis remains an unsolved problem - in the sense in which the White House is the solution; 2) Americans object to “forcing the situation”, not wanting to disperse from Moscow where there has been at least some kind of rapprochement and where Moscow partially solves the problems of American security, destroying the terrorists and turning the hatred of the rest upon themselves; 3) The United States will not tolerate any Russian influence in the Donbas and will not back down on the idea of ​​“returning Crimea” to Ukraine.

A complete rejection of sanctions while preserving Crimea for Russia is possible, I suppose, in fifty years. That was the time it took the American rulers to lift the embargo from Cuba.

Observed and commented on Oleg Chuvakin
- especially for topwar.ru
Ctrl Enter
Noticed oshЫbku Highlight text and press. Ctrl + Enter
We are
It's time to stop the assassination of the Russian ArcticJohn Cornyn and K have found the weak point of Russia - banking assets in the USA
Military Reviewin Yandex News
Military Reviewin Google News
98 comments
Information
Dear reader, to leave comments on the publication, you must to register.