December 29 2015
156
Western analysts call Putin "The Iron Man" (in English, the original hard-man). Such a respectful nickname emerged because of Moscow’s unshakable position: for several months now, the Russian leader has been fighting against IG. Putin’s fight against terrorists fascinates people all over the world. Other analysts point out that against the background of a helpless West, Russia is positioning itself as the heroic stronghold of human civilization. True, Moscow’s high motives are denied: if it is so moral, then why is it doing an arms race? 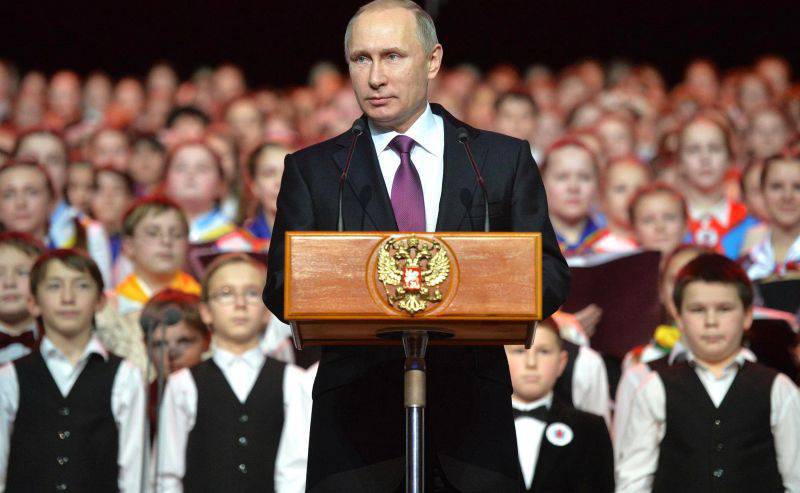 As Peter Hann writes in a British newspaper "Express", at the beginning of 2015, many in the UK were outraged by Putin’s behavior, however, the Kremlin’s master seems to be ending this year. He destroys the evil in the face of the "Islamic state", and his actions lead to success.

If at the beginning of the year Putin’s activities in the international arena were negatively evaluated - the Russian president was compared as a character-villain from the Bond series (for example, he was accused of involvement in the poisoning of former spy Alexander Litvinenko), now he seems to be a politician who actually headed the mission militants "IG."

This year began for Putin's deterioration in relations with the West. They were the worst since the days of the Cold War, the journalist believes, since the crisis in Ukraine has spread, and the situation with the Malaysia Airlines board MH17 shot down near Donetsk has complicated it. In addition, the West was upset when the Russian opposition leader Boris Nemtsov was killed (in February), and he was shot dead "near the Kremlin." World leaders "condemned the murder and asked to conduct a full investigation into the circumstances of death," reminds the journalist.

As a result, seeing the continuing tension and the growth of contradictions, the Russian authorities finally took an anti-Western position. And even the resources of "Wikipedia" and "Fairy liquid" were briefly blocked in Russia.

Not less than three times this year, British fighter jets were raised from a base in Scotland - after Russian military aircraft "encroached on British airspace," writes Peter Hann.

But then "something happened," the correspondent continues. In order to change the international perception of Russian politics, “Putin’s former chief KGB agent made a turn of 180 degrees”.

In the past few months, he has shown himself to be “Iron Man.” His fight against IG, also known as Daesh, has expanded his fans. This happened because in September, he agreed to inflict airstrikes on the positions of jihadists in Syria.

The strikes were effective: Russian planes instantly bombed military facilities and jihadist training centers. In fear of the new Russian bombing, the militants were forced to retreat.

“During the mission, Putin’s bombers conducted hundreds of sorties in war-torn Syria, which is confirmed by the Russian Ministry of Defense,” writes the journalist.

More 2000 bombs destroyed extremist objects. The Russian military claims that 70 command centers, 21 training camp, six munitions and explosives factories, 43 ammunition depot and 6 oil facilities have been destroyed. And this is only from December 5 to December 8!

As Mr. Putin continues his mission today to destroy the IS, his perception in the world is gradually changing.

The journalist recalls that in November the United States (Russia's traditional opponent of the Cold War) announced that V. V. Putin and B. H. Obama had agreed on a political transition and settlement in Syria. The goal of both states is to put an end to the civil war in Syria, which, in fact, led to the emergence and strengthening of the IS.

And therefore, Mr. Putin, a man whom "the West was afraid and hated", is now universally respected, the British author believes.

A somewhat different opinion about Iron Man is expressed in the Investor's Business Daily. According to the editors, Vladimir Putin puts himself in the role of a hero, but rather resembles a hooligan.

From the editorial Investor's Business Daily the reader gets a combined image of Putin: at the same time both a “moral hero” and a bully.

“Russia has repeatedly positioned itself as a heroic stronghold and protector of civilization against the backdrop of a helpless West,” writes the publication. “But if its morality is so high, why does it increase the arms race and take threatening actions against the United States?”

For example, last month, President Vladimir Putin slyly hinted at a development plan for a high-speed unmanned submarine of the Canyon project, capable of delivering nuclear warheads to a range of 6200 miles at a depth of 3280 feet.

The US military experts, having familiarized themselves with the project, said that the Canyon would be invulnerable to interception, able to bypass the American defensive missile shield and is designed to attack ports and coastal cities.

Information about the underwater drone was presented as an “accidental leak” that allowed Russian news agencies to make publications. In fact, this information is supposedly secret. The editors do not believe this: after all, in Russia, Putin controls the media. In fact, the information was a “threat” - another signal to the West about “aggressive” intentions.

Since 2005, in the absence of any real threats, the editorial board continues, Russia has increased its military budget five times, bringing it to 50 billion.

But this is not only Russia's military spending is worrying Americans. According to the publication, there is a "number of threatening actions" of Russia "in relation to the territory of the United States."

Last year, the Russian strategic air force showed its strength off the coast of California: Tu-95 “Bear” bombers were accompanied by American fighters (at least Bill Hertz wrote about it in The Washington Times).

This year, Russian bombers flew over the island of Guam. In addition, the Russians stepped up cyber attacks and espionage. Finally, Moscow took up the increase in the number of its Arctic bases (before 18) and tried to regain its influence in Cuba and, probably, in Venezuela. This is not to mention the fact that Moscow continues to harbor the traitor Snowden, who previously worked in the United States for the National Security Agency.

However, Putin continues to position Russia as a bulwark in the fight against terrorism. He really is fighting the Islamic State, and the Obama administration is only showing "helplessness" and "weakness." At the same time, Putin is successfully promoting "historical Russia's role in protecting Christian minorities in the holy land. ” In Russia itself, Putin is believed to oppose "social disintegration" and support the "spiritual rightness" of the Russian Orthodox Church.

And this is not some kind of distortion of reality, indicates the publication. All that is listed above, there are fragments of "historical heroism of Russia."

However, in Russia, Putin acts "as a petty thug": after all, he is building up military power, trying to resist the West, and also puts pressure on political opponents inside the country. “Putin may think that he is a hero, but he acts like a petty bully,” the publication ironically.

Western analysts have declared Putin "Iron Man" - the one who worthily led the effective mission to destroy the militants of "IS" in Syria. And, since Putin does not stop beating violent terrorists, his perception in the world is changing, some authors say. Let's say more: Mr. Putin now enjoys "universal respect." At least, the British journalist Peter Hann is sure of that, working, by the way, in that very newspaper, almost 80% of readers of which the other day wished to make Putin the prime minister of Britain.

Recall, as the newspaper wrote recently "Express", 4 from 5 residents of the United Kingdom would prefer to see the leaders of Great Britain as the Russian president, and not at all David Cameron.

As for the editorial staff of Investor's Business Daily, it is strange, when speaking of Russia as a heroic stronghold and defender of civilization “against the background of the helpless West”, immediately calling Putin a “petty hooligan” who “increases military power”. First, no one interfered with the American coalition to truly smash the militants "IG". Livia was instantly bombed out. In Syria, the "helpless" West wanted to become himself. Secondly, it is simply ridiculous to call the United States and NATO, whose bases surrounded Russia, "helpless." Putin has to, willy-nilly, to be a “minor hooligan” in order to give big blows to the hooligans.