This time, Putin has nothing to do with it: Ukraine itself is on the brink of political suicide (Bloomberg, USA) 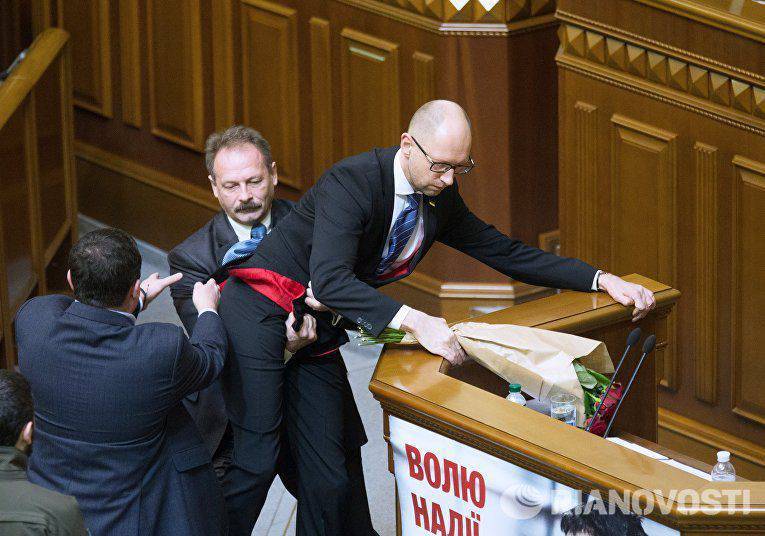 Yes, does Vladimir Putin really need to bring Ukraine down the post-revolutionary path! Its current leaders themselves do this very well.

The Russian president today has focused on Syria, and this helps to lower the degree of conflict in eastern Ukraine, creating an opportunity for reform and a way out of recession. However, the administration in Kiev was mired in internal squabbles. The fist fight this month in parliament, as well as the clash between the interior minister and the regional governor using profanity, demonstrate a split that threatens to sink the government and derail the IMF’s 17,5 billion-dollar assistance program. The next flash point will be the budget vote for the 2016 year.

Memories of the failed Orange Revolution are still fresh, but Ukraine is once again taking the risk of allowing internal disputes to thwart the country's second attempt in a decade to free themselves from the communist past. Reformers are in conflict with privileged circles that control a large part of the economy, which were opposed by protesters who overthrew the pro-Russian leader of the country in 2014 and demanded transparency along European lines. The fact that IMF loans and billions of additional assistance from allied countries were at risk is reflected in a sharp increase in bond yields.

“Judging by recent events, Ukraine is getting closer and closer to political suicide,” said Joerg Forbrig, senior director of programs at the Germany-USA Marshall Foundation of Germany. - The civil strife in Kiev is most useful for Moscow. If Ukraine’s attitude towards reforms is weakened, the internal struggle will intensify, and rapprochement with the West will stop, Moscow will essentially achieve its goals. ”

President Poroshenko and Prime Minister Arseniy Yatsenyuk who enjoy the support of the United States and Europe are criticized for failing to fulfill their promises to curb corruption and limit the power and influence of oligarchs. Transparency International ranks Ukraine in 142-th place from 175 countries in terms of estimates of bribery, and the World Bank said in October that Ukraine has “a long way to go.”

Discontent overlaps. On December 11, Yatsenyuk’s speech in parliament was frustrated when a deputy from Poroshenko’s party seeking a change in prime minister provoked a mass brawl in the courtroom. A few days later, ex-president of Georgia Mikhail Saakashvili, now the governor of the Odessa region, accused of bribery Interior Minister Arsen Avakov and other members of the government at a meeting on the issue of reforms. Poroshenko sat next, covering his face with his hands.

"The collapse of trust"

The split in the ranks of the ruling coalition, which won a landslide in last year’s elections, also impedes the adoption of the budget for next year. This, in turn, prevents the transfer of the next tranche of international aid to Ukraine by almost five billion dollars, although the country's economy cannot recover from the recession that has lasted for a year and a half.

On Friday, the IMF said that parliament should adopt a budget that meets its target for a deficit of 3,7% of GDP, as proposed by the government, and that otherwise the assistance will be terminated. Ukraine needs to “immediately” fulfill its obligations to the IMF in order to avoid delays with international assistance, US Treasury Secretary Jacob J. Lew said on Tuesday evening during a telephone conversation with Yatsenyuk.

Yatsenyuk on Wednesday said that his government "agreed with the deputies on all issues" relating to the budget, but at the same time accused some lawmakers that "they do not realize their responsibility to the country."

“The main danger lies in the fact that some high-ranking politicians would be happy to thwart the adoption of the budget in an attempt to squeeze the IMF out of the country and thwart the anti-corruption campaign,” said Jabot, who is involved in managing the 12 billions dollar-denominated debt of developing countries. “If a deal with the IMF fails, another and very negative collapse of trust will arise, and there will be no growth next year.”

This tension is reflected in the long-term lending markets. The yield of dollar-denominated Ukrainian bonds maturing in 2019 after the first month-long trading jumped more than one percentage point to 10,112%, destroying optimism about the restructuring. The head of the central bank, Valeria Gontareva, last week stated that the country's leadership is keeping the base interest rate at the level of 22%, also due to political tensions.

The quarrel between Saakashvili and Avakov forced Ukrainian leaders to reiterate their unity and stop talking about the new premiere. In a joint statement, Poroshenko, Yatsenyuk and Parliament Speaker Volodymyr Groysman accused "corrupt oligarchs" of fomenting a "hysterical anti-state and anti-government campaign." According to them, unity is necessary for the “success of change” in Ukraine.

American vice-president Joe Biden, who visited Kiev this month, spoke about unity. Addressing the deputies and the country's leadership, he said, recalling last year's uprising: "All of you should put aside minor differences and make a real revolution of dignity." Loans from the United States, the EU, Japan, and other countries depend on moving along the path of reform. The United States has provided guarantees for the sale of bonds worth $ 2 billion by the Ukrainian government.

Bank of America believes that the political turmoil in Ukraine will pass. “We expect the parliament to adopt the budget, the IMF program will continue with minimal delays, and the coalition will remain safe and sound over the next six months,” said strategy expert Vadim Khramov in his brief note.

But even if the lawmakers do everything necessary to transfer the next tranche of aid to Ukraine, in 2016 there will be a lot of problems that will cause instability.

Former Prime Minister Yulia Tymoshenko, whose party became part of the government, still intends to hold a vote on a vote of no confidence in Yatsenyuk. Another party from the self-help coalition insists on the resignation of the prosecutor general, and protesters in Kiev often criticize him for not considering bribery cases. Deputies are also arguing with the government over the new tax legislation, and these disputes will most likely continue in the coming year.

“Obviously, a split in the ranks of the ruling coalition becomes an obstacle to political decision-making,” said Eurasia Group analyst Alex Brideau in his e-mail. “And since there is a high probability that Yatsenyuk will remain in power, these battles will probably intensify at the beginning of 2016 of the year.”

Ctrl Enter
Noticed oshЫbku Highlight text and press. Ctrl + Enter
We are
Allied World War II Tank Plants (memories in 18 photos and one video)Situational analysis of the death of the MH17 flight (Malaysian Boeing 777), made on the basis of engineering analysis from 15.08.2014
Military Reviewin Yandex News
Military Reviewin Google News
48 comments
Information
Dear reader, to leave comments on the publication, you must to register.