Buying Louisiana: the beginning of a new era

December 29 2015
18
Louisiana's purchase of 30 on April 1803 was the most important event in stories United States, forever launched this country to imperialism. The vast territory of the then Louisiana (2 100 000 sq. Km) to the current small state with the same name has a conditional relationship. To see this, just look at the historical maps. Speaking the language of simple comparisons, having joined Louisiana, the United States has immediately doubled its territory, having received enormous resources for economic growth and further unrestrained territorial expansion. 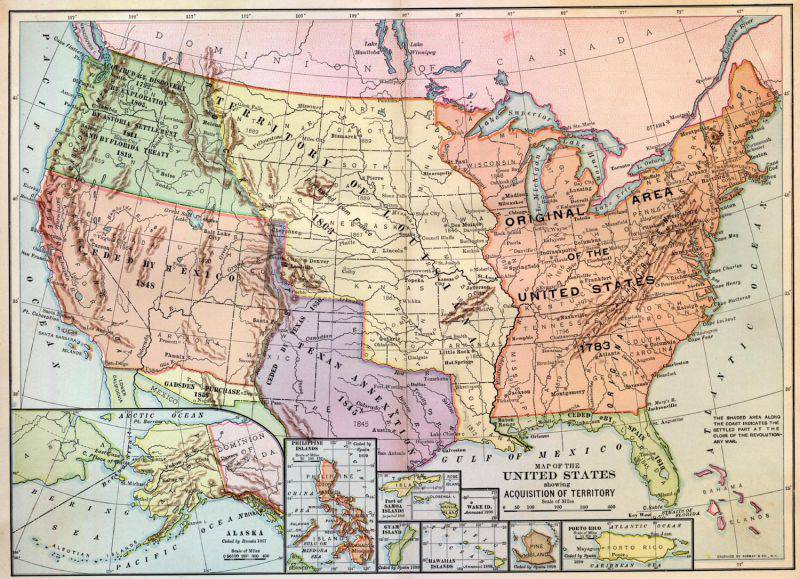 After independence, the US government lifted the British ban on settling beyond the Allegan Mountains, and the colonists moved en masse to the West. But the movement had its own geographical limits - they rested against the borders of Louisiana. The history of this territory is quite complicated, and it in turn belonged to the French, the Spaniards, and at the beginning of the XIX century was in the process of another transfer from Spain to France under the Treaty of San Ildefonso.

The United States was interested in acquiring, first of all, New Orleans, through which American trade between the western and eastern margins proceeded. Goods descended through the Mississippi, across the Gulf of Mexico and the Atlantic Ocean to the East Coast of the United States. Back cargo went the same way. But now the exit from the Mississippi to the Gulf of Mexico was locked just by New Orleans, and it was this strategic area that the then US President Thomas Jefferson planned to take under control. Speech about the purchase of the whole of Louisiana at that time was not yet, although in the entourage of the head of state such thoughts were already expressed.

Although there was an agreement with Spain on the free transit of many goods, this did not remove the urgency of the problem and more reliable guarantees were required.

In order to conduct a diplomatic sounding of the mission in Paris, the mission was represented by James Monroe (the future fifth US president and author of the famous expansionist Monroe Doctrine) and Robert Livingstone. Pierre-Samuel Dupont, who had extensive contacts with the ruling circles of France, was attached as an assistant to them. Together they were to influence Napoleon Bonaparte and convince him to sell New Orleans and the surrounding territories to the United States.

By 1803, Paris’s relations with London had deteriorated so much that open war became inevitable. Knowing about the uncomfortable position of France, the Americans increasingly made replicas like “sell, or take power”. They were spoken more in private conversations, but the mood of the young state reflected exactly. However, Napoleon himself realized how defenseless are the possessions in the New World. Remembering the sad fate of Acadia, a French possession in North America, previously conquered by the British, the First Consul of the French Republic decided to sell. The future emperor considered war more important than overseas adventures at home.

By the way, there is also an alternative version of events, indicating that the French offer to sell fell upon American diplomats like snow on their heads - after all, they had the means and authority only to purchase New Orleans.

The sale agreement was signed on 30 on April 1803 of the year in Paris, and the actual transfer of sovereignty took place a year later - on March 10 of 1804. The territory was eventually sold for 15 million dollars, of which 11 million 250 thousand, were paid immediately, and the remaining amount went to repay France’s debt to US citizens. The benefits for the United States were colossal from any angle. However, in the United States at that time there was still no consensus about whether this purchase is useful or not, not to mention the sharply aggravated relations with Great Britain and Spain.

The Spaniards, who planned to cover their continental possessions as a French Louisiana shield, spoke out sharply against the deal, but the US ignored their opinion. Caught in an unfavorable strategic position, Spain was later forced to cede Florida.

In Britain, in the 1818 year, after the Anglo-American War 1812-1815, the very north of Louisiana withdrew, after which the border was finally straightened and assumed a modern look.

Having lost Louisiana, France lost all possessions in North America, and only in 1816 did St. Pierre and Miquelon, the tiny islands off the coast of Newfoundland, return to her.

For Russia, the French situation will repeat exactly more than half a century later in the case of Alaska. Having a constant threat in Europe, military conflicts in Central Asia, as well as a turbulent border with China and Japan, the content of the North American possessions seemed to Alexander II an inadmissible luxury. We got rid of the distant and sparsely populated territory through the sale, so as not to lose it by military means.

Ctrl Enter
Noticed oshЫbku Highlight text and press. Ctrl + Enter
We are
Castle San Juan and PalafollsHow Stalin created Israel. By the 66 anniversary of the independence of Israel
18 comments
Information
Dear reader, to leave comments on the publication, you must to register.