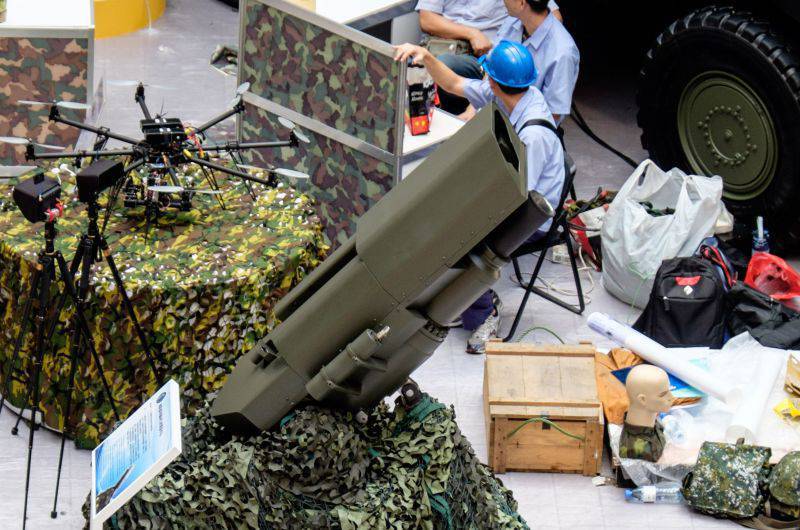 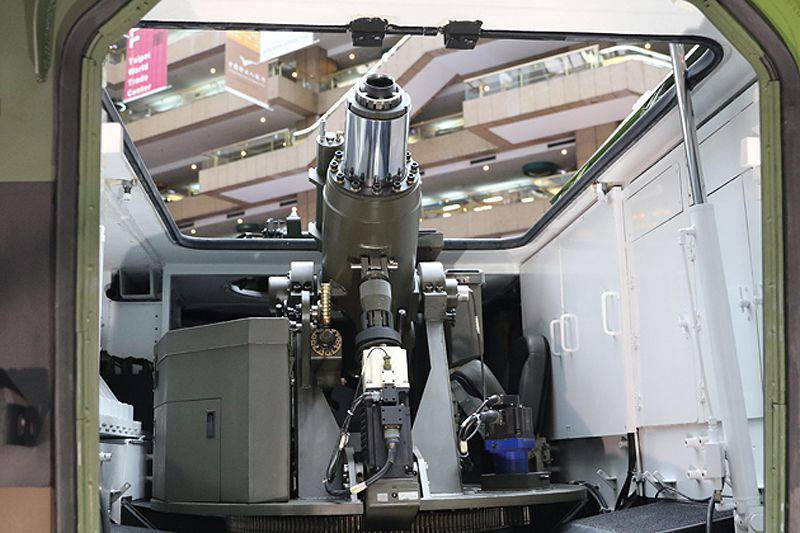 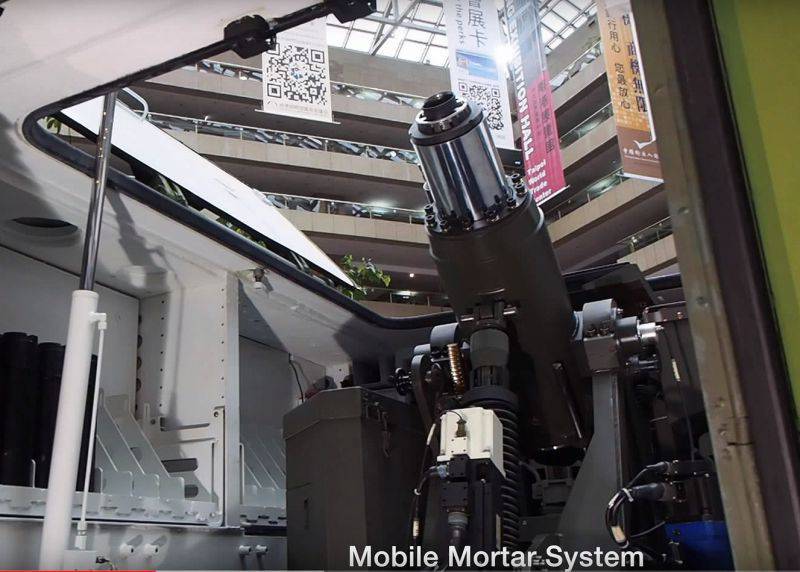 At the Taipei Aerospace & Defense Technology Exhibition (TADTE) 2015, the Armaments Department of the Ministry of Defense of Taiwan presented the concept of an advanced self-propelled system based on a modular base that can accept 81 mm or 120 mm smooth-bore mortars.

Designed by the 202 military plant (subordinate to the armaments department), the 81 / 120-mm mobile mortar complex MMS (Mobile Mortar System) is a rotating electrically powered support that also includes a hydraulic sliding mechanism that can, according to the manufacturer, reduce the recoil forces on 70%, which allows you to install a mortar on various wheeled and tracked combat vehicles without the need to strengthen the suspension. The support rotates on all 360 °, the angles of the mortar barrel range from 45 ° to 85 °. The drives are electric, but there is also a manual mode of operation.

The MMS mortar complex has a digital fire control system (FCS) with an integrated ballistic computer that allows the arrow to fire with increased accuracy. While the system was designed platform-independent, an MMS prototype with an 81-mm mortar was successfully installed on the CM-32 8xXNNUMX Cloud Leopard armored personnel carrier. It is clear that this machine was modified by installing a large sunroof, as well as expanding the storage of regular ammunition to 8 mortar rounds, which are also currently being developed. In this configuration, the crew of the car is five people: the driver, the commander of the machine, the shooter, the assistant gunner / loader and an expert in ammunition.

A semi-automatic muzzle loading system for an 120-mm mortar was also shown. The system, consisting of three main modules, the charging, feeding and tray, allows the operator to easily charge 120-mm mortars by placing the projectile in the feeding module, which is then automatically loaded into the mortar barrel. The 120-mm mortar is fully compatible with MMS and has also been successfully tested on the Cloud Leopard BTR.

“The new system allows the mortar crew to remain under the protection of the Leopard Cloud armor and maintain a supporting fire,” a spokesman for the 202 military plant said. Before, the calculation was to dismount, collect and lead your mortar to normal combat, putting it at risk of being shot at. ”

“Preparation has now been significantly reduced, the mortar is ready for firing immediately after stopping the machine and opening the hatch. The calculation only needs to enter the coordinates in the LMS and charge the mine. "

The integration of the 81-mm MMS complex with the Cloud Leopard machine was completed in May 2015 of the year, and initial tests demonstrated a firing rate of more than 15 rounds per minute. It is expected that the complex will undergo further tests, including live firing in the Taiwanese army.

The department also plans to install a similarly configured MMS complex on the HMMWV (High Mobility Multipurpose Wheeled Vehicle) armored car, although this development will only begin after this weapon system is fully qualified for the Cloud Leopard vehicle.

202-th plant also developed a new 81-mm mortar shot, based on the American high-explosive fragmentation projectile M374A3, which is considered obsolete and is not in service with the American army, although the Taiwanese army has some in its arsenals. According to the 202 plant representative, the XTC 103 high-explosive fragmentation mortar is distinguished by six additional charges fixed around the tail (four charges of the original M374A3 shot), as well as the streamlined shape of the projectile, which increased the maximum range by 25% to 6300 meters.

A variant of the XTC 103 mortar shot with 1150 steel balls is currently being developed, loaded around an explosive charge to increase lethality against infantry.

As part of the development of the mortar transporter based on Cloud Leopard, other concepts are being tested, including aerial reconnaissance and target designation systems. It is considered as a future standard system for this machine and will include a multi-rotor unmanned vehicle (multikopter) equipped with a set of cameras and a laser rangefinder. After launch, the system transmits the exact coordinates of the target to the OMS of the mortar complex, which significantly improves the accuracy of the fire. In addition to the mortar complex, a camera system was shown on the Cloud Leopard showpiece, which is designed to increase situational awareness and driving with closed hatches.

Ctrl Enter
Noticed oshЫbku Highlight text and press. Ctrl + Enter
We are
Overview of artillery. Part of 3. Heavy mortars and ammunitionForeign self-propelled mortars caliber 120 millimeters
3 comments
Information
Dear reader, to leave comments on the publication, you must to register.