December 29 2015
281
In 1904, Russian inventor Mikhail Mikhailovich Pomortsev received a new material - kersey: canvas fabric, impregnated with a mixture of paraffin, rosin and egg yolk. The properties of the new, very cheap material were very similar to the skin: it did not let in moisture, but it also breathed. True, its purpose at first was rather narrow: during the Russo-Japanese War, ammunition for horses, bags and covers for artillery were made of kersey.


Pomortsev's material was appreciated, it was already decided to let out boots from a kersey, but their production was not adjusted at that time. Mikhail Mikhailovich died, and the boots that were not made were, so to speak, put aside for almost twenty years.

Soldier’s shoes owed his second birth to chemist Ivan Vasilyevich Plotnikov, a native of the Tambov Region, a graduate of the Dmitri Mendeleev Moscow Chemical Technology Institute. The country had established production of "kirzachs", but their first use showed that in the cold the boots cracked, hardened and became brittle. We collected a special commission, asked Ivan Vasilyevich:
- Why is your kersey so cold and not breathing?
“Because the bull and the cow have not yet shared with us all their secrets,” answered the chemist.

For such audacity Plotnikov, of course, could be punished. However, this was not done. He was commissioned to improve the technology of production of kersey.

... The Great Patriotic War began. The importance of comfortable and cheap soldier's shoes turned out to be so significant that Kosygin himself was in charge of this question. After all, the army demanded enormous material resources, neither army shoes nor boots were sorely lacking. Leather shoes were just not doing anything. And the Soviet government even issued a closed order on the start of production of bast shoes for the Red Army, in order to put on soldiers at least for summer time and have time to resolve the issue with boots.

At the beginning of the war, Ivan Vasilyevich Plotnikov was taken to the Moscow militia. However, after a few weeks, many scientists were returned to the rear. Plotnikov was appointed director and at the same time the chief engineer of the Kozhimit plant and set the task in the shortest possible time to improve the manufacturing technology of tarpaulin boots.

Plotnikov coped with the task in a short time - by the end of 1941, the production of boots was established in the city of Kirov, where he worked at that time. 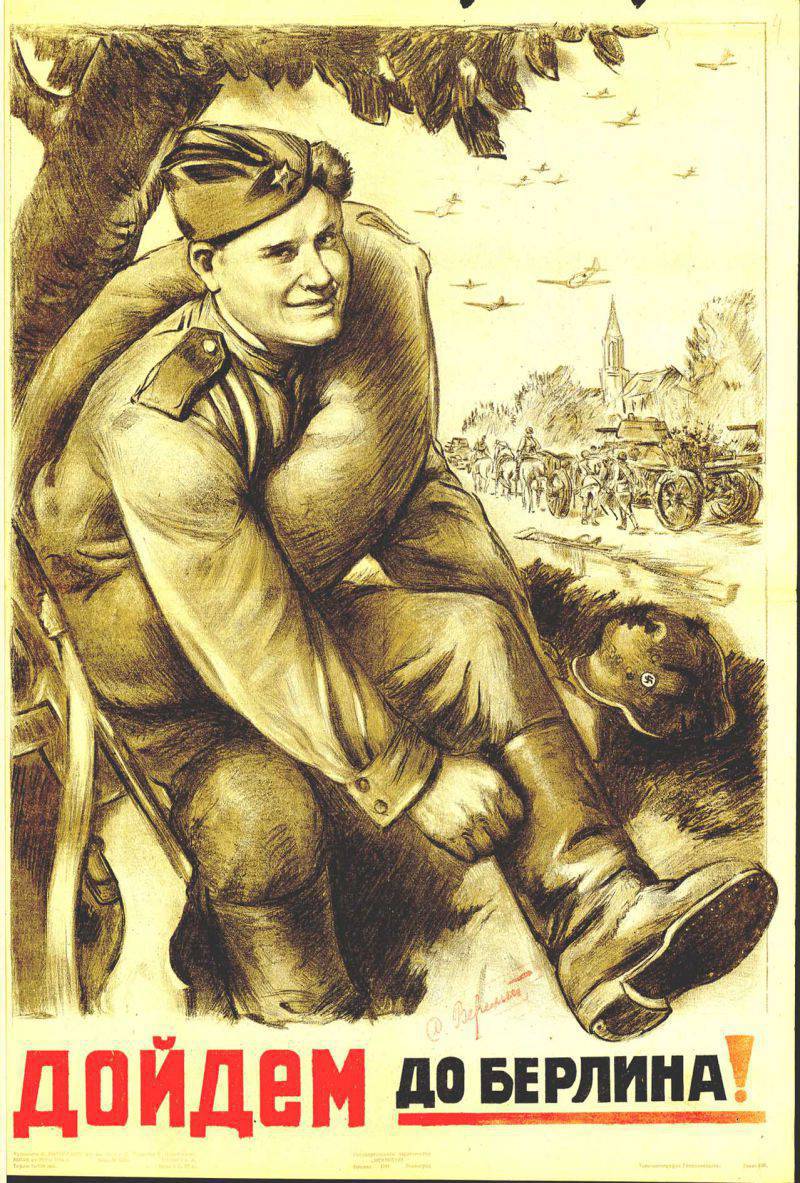 Many people think that the kirsa got its name precisely because Kirov became the first production city (Kirza in abbreviated form - Kirovsky Zavod). And there is an opinion that the boots are named so because they were originally made using coarse wool fabric, originating in the English village of Kersey, where they had long been breeding special breed sheep. There is also a version that the shoe "name" came from the name of the cracked and frozen top layer of the earth - kersey (remember, the first kersey also turned out to be brittle in the cold).

So, the production was adjusted. The boots were immediately highly appreciated by the soldiers: high - no swamp, almost impermeable, but breathable. The upper leg protects against mechanical damage, injury and burns. Another undoubted advantage: there is no need for laces and zippers. However, wearing a kirzachi was very inconvenient: after a few hours, the sock would certainly hit the heel and there would be calluses. And it turned out to be difficult to provide the whole army with socks of the required size. Russian savvy came to the rescue: footballers! Once they are wrapped correctly around the leg, the problem is solved. Moreover, in the case of wetting, they can be wound down with the other side - and the leg will still remain dry, and the wet edge of the fabric will dry out, wrapped around the ankle. In the cold, the soldiers would wind several sisters at once, and lay newspapers in the spacious leg of the kirzachs: an air corridor was created and at the same time a layer - and it was kept warm. And what to say that you can make a footwoman with anything. To her it is not necessary to pick up a pair and look for the right size. The lines themselves come to mind from the famous Kataev's story The Son of the Regiment:

“...- So, shepherd,” said Bidenko sternly, instructively, “it comes out that you didn’t make a real soldier, let alone an artilleryman. What kind of battery are you, if you don’t even know how to wrap a footcloth as expected? No you are not a battery, friend of the heart .... So, one thing: you have to teach you how to wrap footcloths, as every cultural warrior should be. And this will be your first soldier science. Look

With these words, Bidenko spread his footcloth on the floor and firmly put his bare foot on it. He put it a little obliquely, closer to the edge, and this triangular edge slipped under the fingers. Then he strongly pulled the long side of the footcloth, so that not a single wrinkle appeared on it. He slightly admired the tight cloth and suddenly, with lightning speed, with a light, precise air movement, he grabbed his leg, wrapped the heel abruptly around the cloth, intercepted with his free hand, made a sharp corner and wrapped the rest of his leg around the ankle in two turns. Now his leg was tight, without a single wrinkle, was swaddled like a child ... ”

Of course, the boots did not shine with beauty and grace, as, for example, American boots. However, here is a quote from the book of General O. Bredley, the author of the book "History of a soldier ”:“ By the end of January (this is the last military winter of 1944-1945), the disease of foot rheumatism reached such a large size that the American command was at a standstill. We were completely unprepared for this disaster, partly as a result of our own negligence; by the time we started instructing the soldiers, what kind of foot care is needed and what needs to be done so that the boots do not get wet, rheumatism has already spread throughout the army with the swiftness of the plague. About twelve thousand people got sick and because of this, their boots, consider, destroyed a whole American division in a month. The Soviet Army did not know this misfortune ... "

By the end of the Great Patriotic War, the Red Army numbered about ten million soldiers shod with tarpaulin shoes. The effectiveness of this production in the early years was approximately thirty million rubles a year.

And what about the Carpenters? For his invention in April 1942, he was awarded the Stalin Prize. During his life he prepared about 200 scientific and technical works, received more than fifty copyright certificates. Ivan Vasilyevich lived to a great old age and died in the year 1995. Today his name is the vocational school number XXUMX of the village of Novikova: previously it was a parochial school, which Ivan Vasilievich graduated from.

And in the village of Star Perm region a monument to tarpaulin boots is erected. They are made in such a way that anyone can try them on. 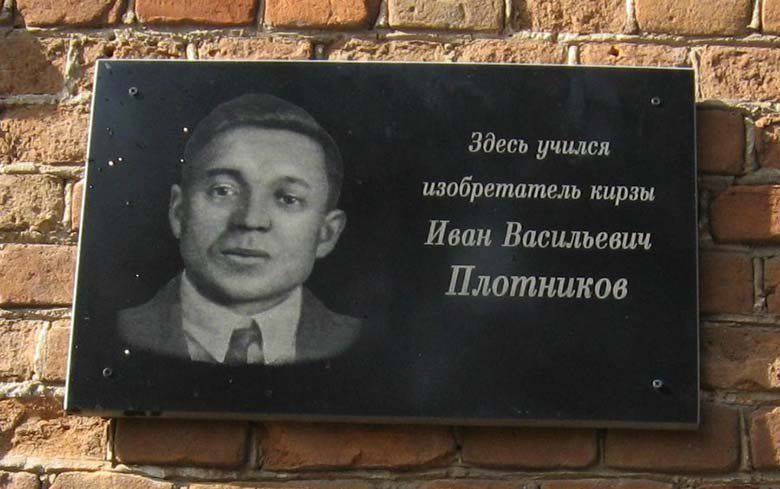 It remains to add this. Not far from my house, literally a ten-minute walk, there is a small army shop. I recently went there and talked to the seller: do the kirzacs take these days? Take. They are in great demand among hunters and fishermen. As a comment, the seller listed me the excellent properties of these boots. But I already wrote about them above.